Michael Gonzales, who was an assistant coach last season at Monrovia, is the new baseball head coach at South Pasadena, which will have its third coach in as many years. 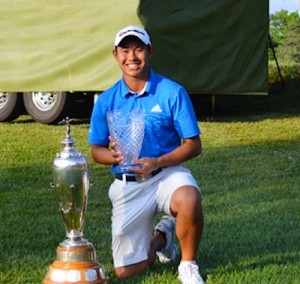 Recent La Canada High School graduate Collin Morikawa won the Trans-Mississippi amateur golf Championship, setting a competitive course record at Flint Hills National Golf Club in Andover, Kan.
Morikawa, who was selected the Pasadena Star-News player of the year last month and will play at Cal this spring, shot a 6-under-par 64 on the second day of the three-day event to win the 112th annual tournament by seven strokes with an 18-under-par 262.
Morikawa went into the final day of the tournament tied at 6-under-par 134 with soon-to-be college teammate K.K. Limbhasut of Thailand and with John Flaherty from Glastonbury, Conn. LSU-bound Philip Barbaree of Shreveport, La. finished second with Lambhasut third.
“I knew that I had some of the guys (with whom he was tied at the start) playing right behind me,” Morikawa told AmateurGolf.com after he won the tournament, “so having a good first 18 was really important to get ahead of everyone. Luckily, I did get a nice 6-under again.”