GAMES OF THE WEEK
ST. FRANCIS 60, LA SALLE 0
LA CANADA FLINTRIDGE >> In time, St. Francis vs. La Salle may become one of the top high school football rivalries in the West Valley.
But Friday night the schools’ first meeting was instead a coronation for host St. Francis.
Jeremiah Martin accounted for 250 yards and six touchdowns and the Golden Knights clinched A a share of their first league title since 1997 with a 60-0 victory over the Lancers in an Angelus League game at Friedman Field.
Jasher Foster had four receptions for 125 yards receiving and two scores and Dylan Crawford had two for 41 yards and two touchdowns for St. Francis, which improved to 9-0 overall and 4-0 in league play. St. Francis, by virtue of Harvard-Westlake’s 28-14 win over Salesian, clinched the league’s No. 1 playoff spot.
La Salle slipped to 3-5 and 0-4.
— Stephen Ramirez
MONROVIA 24, LA CANADA 7
MONROVIA — Monrovia wrapped up the Rio Hondo league title Friday, beating La Canada 24-7. Octavius Spencer had two punt returns for touchdowns yards in the first half to lead the way on his senior night.
The combination of off-and-on rain and the majority of the student body deciding to skip the game made for a strange Halloween night.
“It was different not having all the fans behind us,” Spencer said. “I liked the atmosphere of the rain though. I like playing in weather games.”
Monrovia came into the game winning its last two by a combined score of 88-12.
The Wildcats (8-1, 4-0) couldn’t make plays early on to take control. When they did manage to move the ball, they had problems taking care of it with two early turnovers.
— Robert Schmitt
ROUNDUP
ROSEMEAD 51, SOUTH EL MONTE 14
Rosemead High School clinched at least a share of its first Mission Valley League championship in six years with a 51-14 victory over South El Monte on Friday night.
The Panthers (5-4, 5-0) can take the title outright if they defeat Mountain View next week.
The Eagles (3-6, 3-2) did not make it easy early on.
HOW THE TOP TEN FARED
1. St. Francis (9-0) def. La Salle, 60-0
2. Monrovia (8-1) def. La Canada, 24-7
3. Muir (5-3) def. Hoover, 40-0 (Thursday)
4. Maranatha (9-0), idle
5. San Marino (7-2) def. Blair, 76-8 (Thursday)
6. Pasadena Poly (9-0) def. Gabrielino, 49-20 (Thursday)
7. La Canada (6-3) lost to Monrovia, 24-7
8. Pasadena (4-5) lost to Crescenta Valley, 49-24
9. South Pasadena (6-3) def. Temple City, 41-18
10. La Salle (3-6) lost to St. Francis, 60-0
OTHER SCORES
Arroyo 56, Marshall 0
Rosemead 51, South El Monte 14
Schurr 34, Alhambra 0
Rio Hondo Prep 34, Firebaugh 14
Mary Star 69, Bosco Tech 20
Cathedral 36, St. Paul 13
San Gabriel 14, Keppel 6 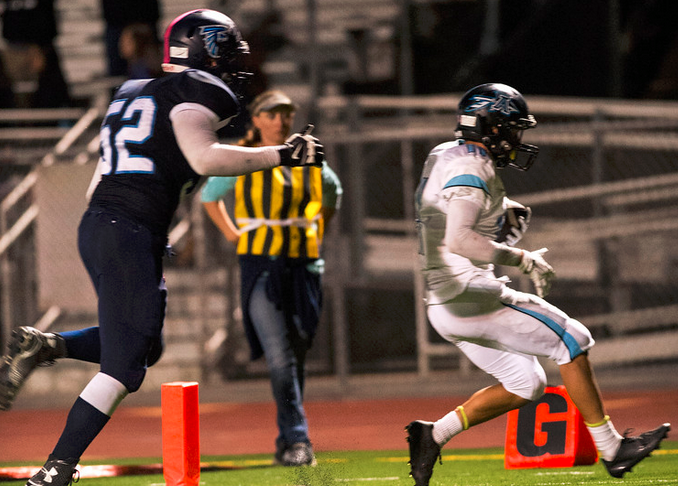 AZUSA 49, DUARTE 30
DUARTE — With just three rushes this season entering Thursday night’s game, junior Dominic Ramirez totaled only 30 yards.
With his first three touches of the ball Thursday, the 5-foot-8 Azusa High School running back totaled three touchdowns on runs of 69, 46 and 4 yards.
And he wasn’t through as he ran for another two scores and finished with 179 yards on 11 carries as the Aztecs defeated host Duarte, 49-30, in a Montview League game.
“I just told the coach to put the ball in my hands and I’ll make something happen,” Ramirez said.
“I know I’m not the biggest, but that means that I have to be the fastest.”
— John Sherrard
MUIR 40, HOOVER 0
PASADENA — There was no chocolate, strawberry or even pistachio in Muir High School’s 40-0 Pacific League game against Hoover on Thursday night.
“We just wanted to play vanilla football,” Muir coach John Hardy Jr. said. “That’s all we wanted to do.”
The Mustangs ran right at the Tornadoes, scoring on their first five drives. Muir (5-4, 5-1) had a 27-0 lead and a running clock at the end of the first quarter.
“We wanted to come out here and do the basic part of football,” Hardy said. “That is run the football, execute your blocks, have a couple of pass plays and just stay healthy.”
— Keith Lair
OTHER SCORES
Crescenta Valley 49, Pasadena 24
Burbank 56, Arcadia 14 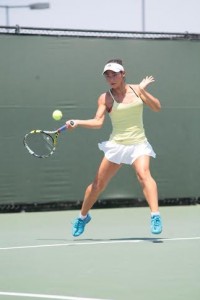 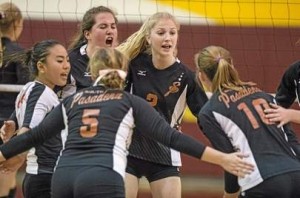 LA CANADA >> League champions find a way to dig deep and pull out victories.
Somehow, that is what South Pasadena High School did in its Rio Hondo League volleyball showdown against La Canada on Tuesday afternoon.
The senior-laden Spartans, playing their final regular-season home game, certainly found a way that made the league-champion Tigers figure that out in the fifth game. La Canada rallied from a 20-9 deficit in the fourth game to force a final fifth game.
“We were all very mad,” South Pasadena senior Sophia Hathaway said. “We shouldn’t have gone (five). We came out mad and said we were not going to lose that game. We were going to do anything it took to win.”