Softball
Maranatha 10, Keppel 0 — Michelle Lieng and Carolyn Shankwiler combined on a no-hitter for the Minutemen (6-4) in a nonleague win. Also contributing to Maranatha’s victory were Karen Lieng, who went 3 for 3 with three runs scored, Kellie Natham, who went 2 for 2 with four RBIs and two triples, Isabella Gallo, who went 3 for 3 with a double, Caroline Sommers, who had a double, and Annie Diehl, who had a home run.
Rio Hondo Prep 8, Flintridge Prep 2 — Alicia Padilla struck out eight and went 2 for 4 with a double and Casie Hall went 1 for 3 with an RBI and a double to lead the Kares (6-2, 2-1) to the Prep League victory. Therese Oshiro struck out six and went 1 for 3 with a double, Alex Tutwiler and Julie Yi each went 2 for 3 for the Rebels (2-4, 0-1).
Baseball
Alhambra 9, Bell gardens 3 — James Giambalvo was the winning pitcher, striking out four and Nick Giambalvo went 2 for 4 with four RBIs and a double to lead the Moors to the Almont League win. For Alhambra, Julian Zermeno went 2 for 3 with two RBIs.
Pasadena 5, Burroughs 3 — Niko Lopez pitched 6.2 innings, striking out five and had a two RBI single to lead the Bulldogs (9-5) to their first Pacific League victory of the season. Daniel Richman, Jeffrey Patrick and Sumner Smith each had an RBI for Pasadena.
Boys golf
Maranatha 196, Whittier Christian 207 — Nick Chavez shot 1-over 35 to earn medalist honors, leading the Minutemen (3-0) to the Olympic League victory. Whittier Christian’s Matt Rafter and Karsten Briley and Maranatha’s Zach Wilkins each shot a 37.
Boys Tennis
Arcadia 11, Crescenta Valley 7 — Nicholas Figueira swept in singles and the teams of Cibi Pari and Ken Nakamine, Henry Zhang and Kevin Yang and Brian Kim and Stanley Lim each won two sets to lead the Apaches (10-0, 6-0) to the Pacific League victory.
Maranatha 16, Valley Christian 2 — The Minutemen (8-3, 3-0) won nine of nine double sets for the Olympic League victory. The winning double teams were Bryan Lin and Kelvin Ye, Nathan Shin and Drew Sierra and Joel Wunderl and Ethan Chee. Maranatha’s Daniel Hsieh swept in singles.

Baseball
Monrovia 7, West Valley 0 — Isaiah Ramos had two RBIs and a triple and Fidel Jiorge had a double to lead the Wildcats (11-2) to the Titan Classic victory. Also for Monrovia, Gustavo Garcia and Patrick Goebel each had an RBI.
Boys golf
La Salle 186, Bosco Tech 303 — Sean Kelly shot 1-under 36 to lead the Lancers (10-0, 3-0) to the Camino Real League win at Brookside No. 1 Golf Course. La Salle’s Jesse Toribio shot an even-par 36, Cosmo Konrad and Ryan Konrad each shot a 38 and Noah Gohrick shot a 39.
Boys tennis
Maranatha 15, Village Christian 3 — Matt Alleman, Daniel Hsieh and Stephane Splichal swept in singles and the team of Bryan Lin and Kelvin Ye swept in doubles to lead the Minutemen (7-3, 2-0) to the Olympic League win. 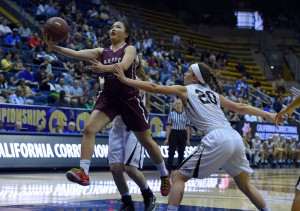 They never completely recovered and were dealt a 53-31 loss by San Jose Archbishop Mitty at Haas Pavilion on the campus of UC Berkeley.

It was the first appearance in a state title game for Keppel and 11th for Mitty, which has now won six titles. Mitty had last won in 2012 and had back-to-back championships in 2007 and 2008.

High school track and field programs tossed around the Pasadena Games like it was a hot potato.

But since Pasadena City College regained control of the meet in 2012, everything seems to be back on an upswing.

“Now we have to turn people away,” Pasadena track and field coach Armand Crespo said. “It’s big. I think we revived it and pumped life into it.” 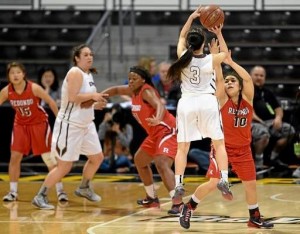 ALHAMBRA >> Defense may win games, but without the ability to score, playing solid defense is moot.
The Keppel High School girls basketball teams have consistently been able to do both well. The Aztecs have an incredibly quick and killer pressure defense and have had a lot of offensive spark at the same time. It is one reason they are consistently considered one of the top programs in Southern California and why they are playing in their first CIF State championship game on Saturday.