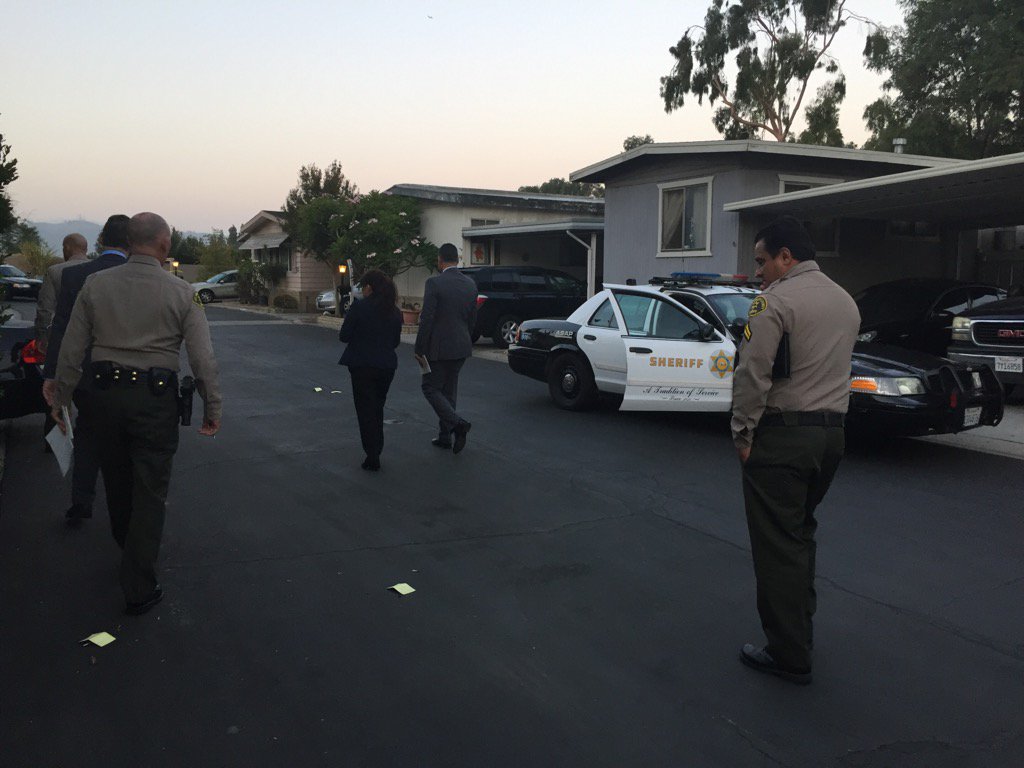 A man stabbed another man in the face after following him away from a Covina bar early Saturday, authorities said.
Jonathan Chi, 36, was booked on suspicion of assault with a deadly weapon following the stabbing, which took place about 2:40 a.m. in a residential neighborhood on Benbow Street, just west of Citrus Avenue, in an unincorporated county area near Covina, Los Angeles County sheriff’s Lt. Terrence Smith. The suspect’s hometown was not clear.
He was at a nearby bar on Citrus Avenue in Covina, along with the victim, prior to the violent confrontation, the sergeant said.
The victim, a 32-year-old man, and a woman left the bar and walked to a home around the corner on Benbow Street, according to Smith.
Chi, who had followed the couple from the bar, approached them armed with a “large knife,” he said. Chi then allegedly stabbed the victim in the face.
Paramedics took the injured man to a hospital. An update on his condition was not available.
Covin police quickly found and detained Chi in the area and turned him over to their counterparts in the sheriff’s department for booking, Smith said.
The motive in the stabbing was not available.
According to county booking records, Chi was released from custody later the same day, pending his initial court appearance, after posting $30,000 bail.

ROSEMEAD >> A bicyclist escaped with minor injuries following a drive-by shooting in Rosemead early Sunday, authorities said.
The shooting occurred about 12:30 a.m. as a 43-year-old El Monte man was riding a bicycle east along Garvey Avenue, near Walnut Grove Avenue, Los Angeles County sheriff’s Sgt. James Long said.
The victim saw a white full-size pickup truck pass by, also heading east, the sergeant said. An arm emerged from the passenger side of the truck before the victim saw flashes and heard the sounds of gunfire.
He suffered grazing wounds to two of his fingers, Long said. The attack caused the victim to crash his bike, and the attackers sped away.
Long said the man rode to his home in El Monte before notifying authorities of the shooting. The motive was unclear.
Any witnesses, or anyone with information can reach the sheriff’s Temple Station at 626-285-7171. Tips may also be submitted anonymously to L.A. Regional Crime Stoppers at 800-222-8477.

A man is accused of stabbing another man in the head at a bus station in El Monte on Friday afternoon before being captured and arrested with the help of witnesses, authorities said.
The alleged attack took place about 5 p.m. at a terminal at the El Monte Bus Station, 3501 Santa Anita Ave., Lt. Lester Trull of the Los Angeles County Sheriff’s Department’s Transit Service Bureau said.
Deputies responded to a report of a stabbing and found a 53-year-old man who had been slashed in the forehead, the lieutenant said. He was taken to a hospital with injuries not believed to be life-threatening.
The stabber had fled the scene, but was pointed out by witnesses to nearby El Monte police officers, according to Trull. Police detained the suspect, also 53, before deputies arrived and arrested him on suspicion of assault with a deadly weapon. The knife believed to have been used in the stabbing was found during the investigation.
While the motive in the stabbing remained under investigation, “this was not random,” Trull said. The suspect and victim knew one another prior to the stabbing, though their specific relationship was unclear.
The identity of the suspect was not available pending the booking process, he said.
Anyone with information can reach the sheriff’s Transit Services Bureau at 323-563-5000. Tips may also be submitted anonymously to L.A. Regional Crime Stoppers at 800-222-8477.

A drive-by shooting in Norwalk on Wednesday afternoon left a man wounded, authorities said.
The gunfire was reported about 2:35 p.m. at Pioneer Boulevard and 163rd Street, Los Angeles County sheriff’s Lt. Robin Limon said.
Two men, both men in their 30s with suspected gang ties, were walking down the street when an attacker passed by in a white Dodge Caliber, Limon said.
Without uttering a word, the driver opened fire with a handgun, striking one of the victims in the leg, according to the lieutenant. The second victim escaped injury.
Deputies initially described the suspect as a Latino man in his 30s with black hair and tattoos on his neck. He was armed with a semi-automatic pistol.
Limon said the gunman was last seen driving south on Pioneer Blvd., toward the 91 Freeway.
Anyone with information can reach the sheriff’s Norwalk Station at 562-863-8711. Tips may also be submitted anonymously to L.A. Regional Crime Stoppers at 800-222-8477.

BALDWIN PARK >> A man suffered a wound to his shoulder in a shooting when was driving through Baldwin Park on Sunday evening, police said.
The shooting took place about 7:30 p.m. as the victim, a man in his mid-20s, was driving an SUV at Ramona Boulevard and Harlan Avenue, according to Baldwin Park police Sgt. Joe Meister.
A bullet flew through an open window and struck the victim in the shoulder, the sergeant said. He did not see his attacker.
“He thought he heard a “pop,” then he felt the pain,” Meister said.
The victim was not believed to have gang ties, and the motive was unknown, he said.
Anyone with information is urged to contact Baldwin Park police at 626-960-1955. Tips may also be submitted anonymously to L.A. Regional Crime Stoppers at 800-222-8477.

A fight between two homeless men early Sunday ended with one of them hospitalized with stab wounds to his head and the other behind bars, authorities said.
Lewis Divens, 52, was booked on suspicion of attempted murder, according to Pasadena police officials and Los Angeles County booking records.
The violence took place about 7 a.m. at Central Park, 219 S. Fair Oaks Ave., according to Pasadena police Lt. Pete Hettema.
Divens and the victim, a 47-year-old man, became involved in an argument over territory at the park, he said.
The victim swung a leg brace at the other during the dispute, Hettema said. Divens allegedly pulled a knife, stabbed the victim in the back of the head and slashed his face.
Paramedics took the injured man to a hospital for treatment of injuries not believed to be life-threatening.
Police found and arrested Divens within minutes, records show.
According to county booking records, he was being held in lieu of $1 million bail pending his initial court appearance.
Anyone with information can reach Pasadena police at 626-744-4241. Tips may also be submitted anonymously to L.A. Regional Crime Stoppers at 800-222-8477.