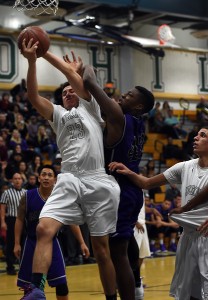 No doubt the Chino Hills boys’ basketball team has talent. Ball brothers Lonzo and LiAngelo (Gelo) are enough to get any team deep into the playoffs.

But can this team win a CIF title, especially considering they’ll most likely be in the difficult Open Division?

After talking with coaches from the other Baseline League teams, the consensus is that will depend on the contribution of the supporting cast.

Last year that duo had some solid players around them in Bishop Mency, now starting at Rice as a true freshman, as well as K.C. Cyprian and Mark Williams.

The Huskies also had a big man in the middle in Nnamdi Okongwu, who tragically passed away over the summer after the injury sustained in a skateboarding accident.

So this season Ball brothers have some unproven players around them. Is there potential? Yes. But they’re still unproven.

The good news is that the Huskies (10-3) have played a challenging schedule which should help those players develop.

Head coach Steve Baik probably thought he was going to have the help those players needed but two transfers, one from Ayala and one from Upland, were not ruled eligible to play by the CIF after those transfers.

Those denials are under appeal but it isn’t often they’re overturned. So the Huskies will be going with the players they have right now.

We’ll see how the season plays out.