Etiwanda junior defensive back Treyjohn Butler announced on Twitter that he has been invited to play in the 2016 U.S. Army All American Bowl. 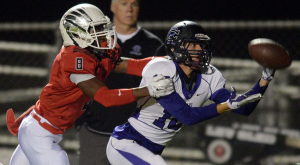 Butler has 85 total tackles with eight interceptions during his first two years with the Eagles’ varsity team, according to MaxPreps.

Butler has seven offers according to 247Sports, including Stanford, Washington and California.

The All-American Game has served as a showcase for the top high school football players in the nation. Previous participants include Adrian Peterson, Reggie Bush and Andrew Luck.

The next game will take place on Jan. 9, 2016 at the Alamodome San Antonio, Tex.