ANGELES NATIONAL FOREST >> Officials plan to shut- down a portion of Glendora Ridge Road in the Angeles Nation Forest north of the San Gabriel Valley between Christmas Eve and Monday due to snow and icy conditions, authorities said.
The closure will begin at 10 a.m. Thursday on Glendora Ridge Road, between Glendora Mountain Road and Mt. Baldy Road, County of Los Angeles Department of Public Works officials said in a written statement.
“Depending on whether conditions, the road is expected to reopen on Monday,” according to the statement. “Public Works will monitor conditions and respond as conditions warrant.”
Drivers who find themselves navigating through snowy or icy conditions are urged to exercise “extreme caution,” especially in mountain areas, officials said.
A full list of weather-related road closures in Los Angeles County is available online at www.dpw.lacounty.gov/roadclosures. 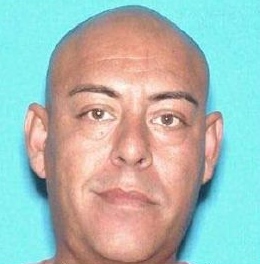 IRWINDALE >> Deputies plan to canvass a stretch of Foothill Boulevard early Monday in search of witnesses or anyone who may have information to help solve the mysterious slaying of a Duarte man found shot to death in his bullet-riddled car nearly a month ago.
Martin Diaz, 48,  was found fatally shot about 5:40 p.m. Nov. 25 in his car, which was stopped in the 15900 block of Foothill Boulevard, just west of Irwindale Avenue, Los Angeles County sheriff’s and coroner officials said. The shooting is believed to have occurred between 4:30 a.m. and 5 a.m., as Diaz was on his way to work at an Azusa sprinkler company.
No further details regarding the circumstances of the shooting, the motive or a suspect description have been released.
In hopes of generating new leads, “Deputies and officers will be contacting drivers (and) passengers in an effort to obtain information from possible witnesses who may have seen anything related to the murder of 48-year-old Martin Diaz,” according to Deputy Ryan Rouzan of the sheriff’s Information Bureau.
Detectives from the sheriff’s Homicide Bureau are assisting Irwindale police in the investigation.
Anyone with information is asked to contact the sheriff’s Homicide Bureau at 323-890-5500. Tips may also be submitted anonymously to L.A. Regional Crime Stoppers at 888-222-8477. 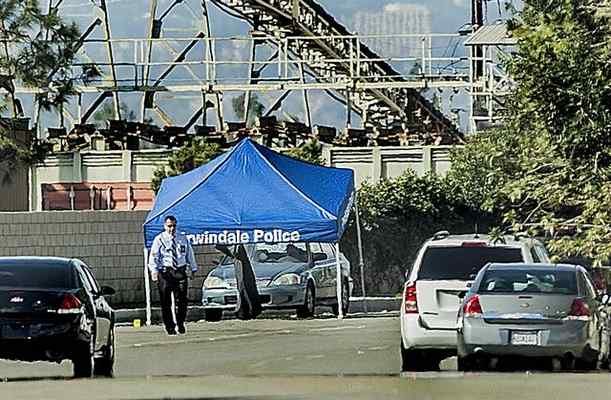 EL MONTE >> The cause of death of a man whose body was discovered in the parking lot of an El Monte auto dealership Saturday remained unclear Sunday, officials said.
The 49-year-old man’s identity was not released pending notification of his family, Lt. Fred Corral of the Los Angeles County Department of Medical Examiner-Coroner said. He was believed to be a transient known to frequent the area.
A worker at an auto dealership in the 9900 block of Garvey Avenue first reported finding the man unresponsive about 10:35 a.m. Saturday, Corral said. Paramedics pronounced him dead at the scene.
The body showed signs of facial trauma, however the source of the injuries remained under investigation. The man may have been injured simply by falling, Corral said. Officials noted an odor of alcohol emanating from the body.
But investigators were yet to rule out the possibility of foul play, Corral said. An autopsy was pending, Corral said.
Detectives from the sheriff’s Homicide Bureau are assisting El Monte police in the investigation. Anyone with information was asked to contact the sheriff’s Homicide Bureau at 323-890-5500. Tips may also be submitted anonymously to L.A. Regional Crime Stoppers at 800-222-8477. 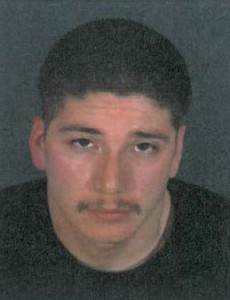 ARCADIA >> The problem of package theft during the holiday season is a perennial problem for law enforcement, but police in Arcadia are taking a new approach to the issue, using GPS tracking technology to turn the tables on package-pilfering Grinches.
Police have begun setting out “bait packages” containing GPS trackers that lead investigators to their precise locations once stolen.
“Detectives are partnering with citizens and local businesses and placing bait packages equipped with tracking devices, which notify
police personnel when packages have been

stolen,” according to Arcadia police Sgt. Brett Bourgeous.
“This technology allows officers to locate suspects with a high degree of accuracy, in order to stop criminals from continuing their crime spree,” he said.
Six package theft suspect have been arrested in recent weeks through the operation, Arcadia police officials said.
The most recent arrests took place Sunday morning, after one such “bait package” was allegedly swiped from a porch in the southeast portion of town, Lt. Colleen Flores said.
Police were notified about 7:30 a.m. that one of the packages had been picked up and was on the move, she said.
“Officers tracked the package and lcoated the two suspects within a few blocks of where the package was stolen,” Flores added.
Arrested were Steve Lopez, 25, and Dandre Lageman, 30, both of El Monte.
Both suspects were booked on suspicion of grand theft, and both were being held in lieu of $20,000 bail pending their initial court appearances, scheduled Tuesday in Pasadena Superior Court, records show.
In at least once case, police recovered not only the bait package, but also other packages stolen from other Arcadia residents, Bourgeous said. “This arrest ensured the items intended to be received by our residents were delivered in time for the holidays.”
Anyone interested in participating in the program can contact Sgt. Bourgeous at 626-574-5163.

PASADENA >> A woman was wounded but expected to survive after gunfire erupted Saturday night at a Pasadena vigil for a man shot to death the night before, authorities said.
The shooting took place about 11:15 p.m. in the 100 block of West Claremont Street, Pasadena police Lt. John Mercado said.
A large group had gathered to memorialize Robert Arthur Calderon, 27, of Altadena, who was gunned down Friday night less than two miles away in the 600 block of North Mentor Avenue, officials said.
An attacker opened fire, striking a woman in the arm and abdomen, Mercado said. The woman, a Pasadena resident in her mid-20s, was hospitalized in stable condition.
Bullet casings recovered at the scene indicate at lease one additional person returned fire, Mercado said.
It was unclear whether the gunman targeted a particular person in the group, or the group as a whole, the lieutenant said.
Witnesses did not cooperate with police to provide information about the shooting, Mercado said. No detailed suspect description was available.
Calderon’s fatal shooting late Friday also remained shrouded in mystery Sunday, and no suspects were in custody.
Police responded to numerous reports of gunfire before finding Calderon lying on the roadside, suffering from multiple gunshot wounds, police said. He died at the scene.
Anyone with information can reach Pasadena police at 626-744-4241. Tips may also be submitted anonymously to L.A. Regional Crime Stoppers at 800-222-8477.

INDUSTRY >> Deputies arrested a serial burglary suspect in Industry Saturday who is believed responsible for more than 20 linked to more than 20 business break-ins in recent months, authorities said.
A sheriff’s sergeant arrested Vernon Palacol, 51, of Whittier, about 6:30 a.m. at Valley Boulevard and 7th Street,, according to Los Angeles County sheriff’s officials and booking records.
Deputies had been seeking unidentified suspects in connection with between 20 and 30 commercial burglaries within the jurisdiction of the sheriff’s Industry Station, which encompasses Industry, La Puente, La Habra Heights and nearby unincorporated communities.
The businesses’ computers were the targets of the burglaries, Lt. David Infante said.
“The suspect utilized a rock or blunt-type instrument to shatter glass doors or windows of businesses,” the lieutenant said. “(Palacol) quickly entered the businesses and stole desktop computers, making hasty getaways.”
While patrolling in the area affected by the burglaries, Sgt. Gregory Gutierrez spotted a man matching the description of one of the wanted burglars driving in the area.
“Within the vehicle, Sgt. Gutierrez recovered several pieces of stolen computer equipment,” Infante said. Palacol was booked on suspicion of burglary.
Investigators continued working Saturday to see if Palacol was also responsible for additional crimes, Infante said.
According to county booking records, Palacol was being held in lieu of $50,000 bail pending his initial court appearance, scheduled Tuesday in West Covina Superior Court.

EL MONTE >> Detectives are investigating the death of a man whose body was discovered Saturday in a commercial neighborhood in El Monte, officials said.
The death was first reported about 11:05 a.m. in the 9900 block of Garvey Avenue, according to Deputy Ryan Rouzan of the Los Angeles County Sheriff’s Information Bureau. The sheriff’s Homicide Bureau is assisting El Monte police in the investigating.
The man was pronounced dead at the scene, Rouzan said. No further details were released.
It was not initially clear whether the death involved foul play.

AZUSA >> A man was wounded, but is expected to survive, after a fight escalated into a stabbing in Azusa late Friday, police said.
The stabbing took place just after 11 p.m. in a residential neighborhood in the 300 block of N. Soldano Avenue, according to Azusa police Lt. Mike Bertelsen.
Police responding to reports of a stabbing found the victim suffering from stab wounds to his upper torso, Bertelsen said in a written statement.
“It appeared the victim and at least one associate were standing near the street when they were approached by an unknown number of male suspects,” he said. “A fight started and the victim was stabbed during the altercation.”
Paramedics took the injured man to a hospital with injuries not believed to be life-threatening, police said.
The motive in the stabbing remained under investigation, Bertelsen said. No suspect description was available.
The victim, described as a local man in his 20s, did not appear to be cooperating with investigators, Sgt. Rick Hayden said. Detectives suspected the attack was gang-related.

LA CANADA FLINTRIDGE >> An armed robber fled with $7 after robbing a robbing a La Canada Flintridge Donut shop Saturday, officials said.
The heist unfolded about 11:35 a.m. at the Golden Donut Palace, on Foothill Boulevard at Gould Avenue, Los Angeles County sheriff’s Lt. Doug Mohoroff said.
The robber brandished a handgun as he demanded money, ultimately fleeing with the paltry sum of cash, he said.
Deputies described the robber as a white man in his 30s, about 5 feet 6 inches tall and 150 to 160 pounds, the lieutenant said.
Initial reports from the scene further described the robber as having a mole on the right side of his lip and wearing a brown knit cap, dark pants and a blue or black long-sleeve flannel shirt.
He was last seen heading east on Foothill Boulevard on foot.
Anyone with information is asked to contact the sheriff’s Crescenta Valley Station at 818-248-3464.

SIERRA MADRE >> Police urged vigilance Saturday morning after discovering about 30 mailboxes had been tampered with in the northeast portion of Sierra Madre, and mail possibly stolen.
The spate of mailbox break-ins was first noticed about 7 a.m., when a resident of the 400 block of N. Canon Avenue went out for a walk and noticed his mailbox had been tampered with, and mail had possibly been stolen, Sierra Madre police officials said in a written statement.
Additional calls soon poured into the police station.
“At this point it appears that approximately 30 mailboxes were tampered with and the incident occurred overnight,” according to the police statement.
Anyone else who noticed their mailbox broken into or otherwise tampered with was asked to report is as well. Police are working with the U.S. Postal Inspection Service in the investigation.
Identity theft is one of the fastest-growing crimes in the nation, police said.
“One of the prime ways in which these identity theft suspects obtain personal information is by stealing mail and your personal mail can be a gold mine to determined criminals,” according to the police statement.
Residents with non-locking mailboxes are encouraged to replace them with ones fitted with locking mechanisms.
Anyone with information is asked to contact Sierra Madre police at 626-355-1414.