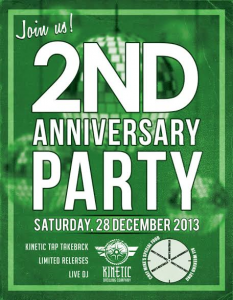 We had the pleasure of visiting both of Lancaster’s breweries this weekend and discovered that one of them — Kinetic Brewing Company — is celebrating its second anniversary this Saturday (December 28).

The brewery will be celebrating all day with food specials and a tap takeback. That’s right…28 taps of nothing but Kinetic brews.

The brewery is also selling tickets for its New Year’s Eve celebration.

END_OF_DOCUMENT_TOKEN_TO_BE_REPLACED

Still haven’t gotten a gift for that beer lover on your list?

Taste of Brews has come to your rescue with a buy-one-get-one-half-price deals for all its 2014 events.

The BOGOHP deals are good through December 31.

In addition, through December 24, discounts are available on special multi-event “super tickets.”

END_OF_DOCUMENT_TOKEN_TO_BE_REPLACED

I was at Torrance’s Smog City Brewing Co., over the weekend partaking in the brewery’s latest limited edition beer, a cherrywood smoked porter.

It is, by the way, an excellent winter warmer perfect for a late Sunday afternoon with the chill of the evening closing in.

And if you’re a porter fan, then Smog City is the place for you at noon Dec. 28.

The brewery rapidly becoming known as being the most adventurous in the county will host its first-ever “Battle of the Cask,’ a friendly competition among its beer-making employees. Each edition will feature different variations on the same style of beer and first up is a porter.

Using the brewery’s Bloody Knuckle porter as a base, five beers will be offered including a:

Is your mouth watering? Mine, too.

Local breweries are pitching in to help the less fortunate this holiday season.

We’ve spotted a few around Southern California that are collecting food and toys, and offering incentives to help sweeten the pot.

Chino’s I & I Brewing, for instance, has set up a Spark of Love toy collection box in its tasting room. Those who donate an unwrapped toy worth at least $10 will get $1 off pints for the night.

Their campaign runs through next Saturday (December 21), so get to the toy store and stock up!

END_OF_DOCUMENT_TOKEN_TO_BE_REPLACED 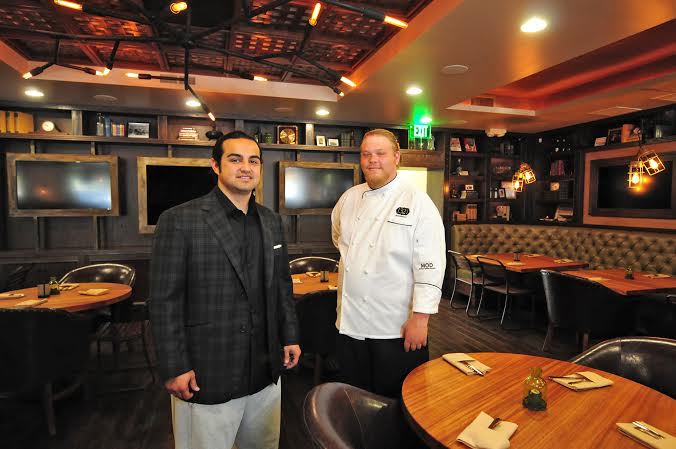 You can call it the Pugafest for short.

The event will take place from 11 a.m. to 4 p.m. at the brewery. However, those who have achieved bronze level or higher in the brewery’s Frequent Flyer loyalty program can begin sampling at 10 a.m.

Cost is $25 for eight samples. Beer lovers will have 24 different barrel-aged beers from which to choose.