*Guinness has released a new limited edition seasonal beer it has dubbed Red Harvest Stout, a non-pumpkin flavored beer “inspired by the ancient Irish legend of Samhain (pronounced saw-wen), a festival held every year to beckon restless spirits on All Hallow’s Eve celebrating the end of fall harvest and coming winter,” according to the press release:

“The stout is crafted with lightly roasted barely giving it subtle aromas of caramel and toffee, accented with a sweet malty taste.”

*Not to be outdone the folks who usually brew Newcastle Brown Ale have come up with a spin-off called Newcastle Werewolf Ale (if you can still find it since availability has apparently been spotty).

*Meanwhile, Torrance’s Smog City Brewing will give those dressed in costume $2 off a growler fill on Halloween. The tasting room is open from 4 p.m. to 9 p.m.

*Finally, you’ll have to wait until Monday for this one, but that’s when downtown LA’s Angel City Brewing unveils its 22oz bombers of Vanilla Porter in local stores. The scary part, if that sounds good to you: only 200 cases of this limited edition brew will be released.

While dark as night and rich in flavor, this Vanilla Porter is actually a beautiful sipping beer with a pleasant vanilla aroma and delectably sweet finish – perfect for shorter days and long chilly nights. 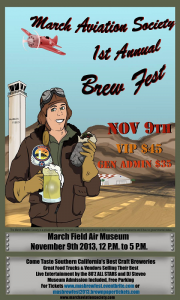 Attendees will be able to sample from more than a dozen Southern California breweries at the event.

You gotta have food to soak up all that beer, so the organizers have scheduled nine food trucks for your dining pleasure.

General admission tickets are $35 (plus a $2.92 service fee if purchased online) and grant you admission from 1 to 5 p.m., live entertainment by the ’80z All-Stars and DJ Steveo, and 15 four-ounce beer samples.

END_OF_DOCUMENT_TOKEN_TO_BE_REPLACED

If you’re awake reading this, it’s time to go to sleep!

The brewery’s vaunted bourbon barrel-aged imperial stout with an oversized ABV content (~20%) goes on sale at 10 a.m. at the Bruery’s web store.

END_OF_DOCUMENT_TOKEN_TO_BE_REPLACED

Although we haven’t yet seen it in bottles yet, Brewery Ommegang‘s second beer from its “Game of Thrones” series has been released.

Corona’s SteamHaus Gastropub has received a keg of Take the Black Stout and will be serving it beginning at 6:30 p.m. tomorrow (October 24).

The gastropub is inviting fans out to watch the show and try the beer. The first 30 people will get collectible glassware. 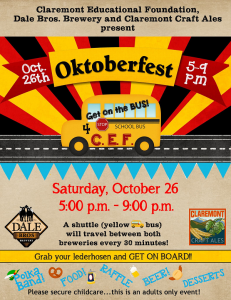 It’s two, two, two festivals in one as Claremont Craft Ales and Upland’s Dale Bros. Brewery team up for Oktoberfest this Saturday (October 26).

Partnering with the breweries is Claremont Educational Foundation. The breweries will donate 10% of beer sales to the organization.

A yellow school bus will shuttle participants between the two breweries every half hour.

END_OF_DOCUMENT_TOKEN_TO_BE_REPLACED

You now have one more reason to make a Thursday night stop at Hangar 24 Craft Brewery in Redlands, at least this month.

The from 6 to 10 p.m. Thursdays in October, the brewery is donating $1 of every pint sold to Inland Women Fighting Cancer.

Plus, the brewery has been selling pink Hangar 24 T-shirts for $15, with 100% of proceeds going to IWFC.

Food vendors have also been pitching in and donating a portion of sales to IWFC.

END_OF_DOCUMENT_TOKEN_TO_BE_REPLACED

Beachwood returned with two gold medals: One for Kilgore in the American-Style Stout category and one for Foam Top in the Golden or Blonde Ale category.

Hangar 24 took home the gold for Warmer in the Specialty Beer category.

END_OF_DOCUMENT_TOKEN_TO_BE_REPLACED

The event will begin at noon at the brewery, 2351 W. Lugonia Ave., Suite G, Redlands.

END_OF_DOCUMENT_TOKEN_TO_BE_REPLACED

Rock & Brews at LAX will offer dine-in and “Grab and Go” service. It’s the first in a series of locations the company hopes to open in airports.

A pair of chemists are behind Federal Brewing in South El Monte, which just opened its tasting room at the end of September. Apparently, the brewers’ chemistry background is conducive to producing great beers…the brewery’s Yelp page has 14 reviews, all of them five-star. The brewery’s tasting room opens at 3 p.m. daily, and closes at 10 p.m. Friday and Saturday and at 7 p.m. the rest of the week. Federal Brewing is at 1822 Chico Ave. Click here to read more.