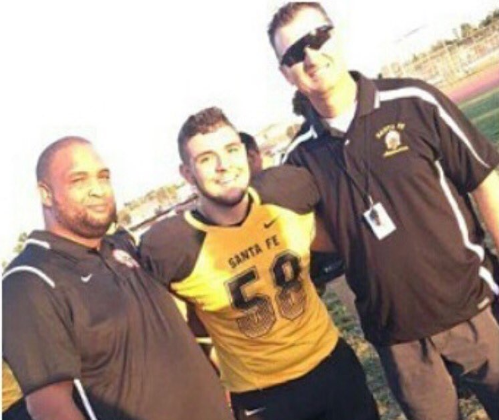 GO FUND ME FOR CHANDLER RAY

Santa Fe High School football player Chandler Ray died Thursday evening after being struck by a car while riding his bike at the intersection of Studebaker Road and Firestone Blvd. in Norwalk. He was 17.

Ray, a junior defensive lineman who alternated between the Chiefs varsity and junior varsity teams, was riding home from a friends house when he was hit by a car. It’s unclear whether clear Ray passed away at the scene or at a local hospital.

“It was just an accident, it was just one of those accidents,” Santa Fe varsity football coach Dave Pierson said. “I think we’re still kind of all in shock and somewhat disbelief. I know a lot of our players are. They can’t believe this happened and it’s very unfortunate.”

There was vigil held for Ray on Thursday evening, which Pierson and Ray’s teammates and Santa Fe students attended. Ray is the second local football player to pass away under fluke circumstances recently.

In late November, Whittier Christian defensive lineman Ethan Hawks died from injuries suffered from being struck by an object that flew into his mother’s car while the two were driving on a local freeway.

Pierson said that Ray was a popular student due to his outgoing nature. He often went out of his way to visit teachers at the school every morning and give them a hug, regardless of whether he was in their class.

“He was a kid that you liked to have around,” Pierson said. “He was a great-spirited kid, very outspoken, he had his own opinion, but always listening to other people’s opinions. He was a strong football player and a strong athlete.

I was looking forward to seeing him as a senior, but obviously we’re not going to have that. It’s back to the things that really matter. Not athletics, but kids growing up.”

Pierson said that the Whittier Police Department is planning to make a donation toward Ray’s funeral arrangements. There is also a GoFundMe page for those seeking to offer help for Ray’s family.

“By no means does this family have loads of money running around,” Pierson said. “It’s just another family where an unforeseen tragedy has taken everybody aback.” 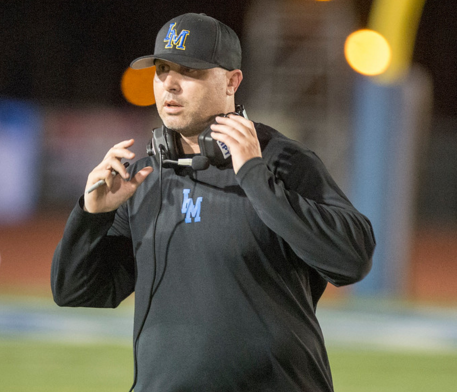 Moschetti walks away just a year after guiding La Mirada to a state regional bowl championship. The Matadores reached the CIF Southern Section Division 3 championship game this season before falling to Edison.

“There just comes a point where it’s just time for a change in leadership,” Moschetti said. “It will be good for me, it will be good for the school. I’ve been here nine years and sometimes your spiel gets old, saying the same things over and over to the kids.

“It hit me walking off the field after we got beat (by Edison) that it was just time for me to not coach at La Mirada anymore.”

There’s speculation that with a high-paying glamour job now open at JSerra and vacancies in other places, Moschetti may be setting up for a jump to another school. But that’s something the 41-year-old known for speaking his mind and taking on all comers somewhat ruled out.

“I think eventually, some day, I’ll come back and coach,” Moschetti said. “I’ve been approached before by private schools, but I grew up in La Mirada and played in La Mirada, and no matter how much money was involved, it was something I could never see myself coaching at one of those schools.

“Anybody can win at Bosco (St. John Bosco). Anybody can win at Servite. I think it’s tougher to win at a little public school like La Mirada, that has under 2,100 students with no money and a tiny little weight room. That’s always been intriguing to me; the challenge to win where guys say you can’t.”

As a student at La Mirada, Moschetti was a two-sport standout in baseball and football. As a quarterback, some would say he won the 1992 CIF championship almost single handed. After graduating in 1993, Moschetti continued to play both sports, but rose to further fame while playing quarterback at Colorado.

As a coach, Moschetti helped guide the school to a CIF championship in 2009. He then caught the ire of some area fans when La Mirada began making videos for social media of the different uniform combinations its players would wear. After some earlier than expected postseason exits, some fans felt La Mirada spent too much time concentrating on how it looked and not winning games.

And yet no matter what La Mirada did in the playoffs, Moschetti’s program was as good as any in terms of getting players scholarships to play at the next level. Lots of scholarships … and often to big-time universities. Since Moschetti took over in 2008, 44 former La Mirada players have gone on to play college football. The Matadores will add to that number again this February.

“The proudest moments that I have, not only me, but the rest of our coaching staff, is on Signing Day,” Moschetti said. “Seeing the kids sign and families taking pictures. We’ve had a lot of kids over the years sign. Sometimes you look back and wish you could’ve done more because there were some kids who didn’t end up signing and fulfilling their dream.

“But that’s what makes me tick, seeing kids go to the next level and get a master’s degree and coming out debt free because it was all paid for.”

Moschetti also threw caution to the wind in terms of scheduling. He beefed up La Mirada’s nonleague schedule so it was one of the toughest around. And while many observers openly scoffed at the notion of La Mirada banging heads with Mater Dei and St. John Bosco, what got lost in the shuffle is that amount of top programs that Moschetti’s teams beat.

It all culminated with with 2015’s historic run. The Matadores won the Southeast Division championship, then won regional and state bowl championship games to finish 13-3. The momentum carried over into this season with La Mirada finally delivering Moschetti the win over a Trinity League he so desired as the Matadores topped Orange Lutheran in Week 0.

La Mirada also beat San Clemente, which later won the Division 2 championship and is playing for a state bowl championship this weekend. The Matadores were heavy favorites to win Division 3, but lost at home to Edison in the championship game on Dec. 2. 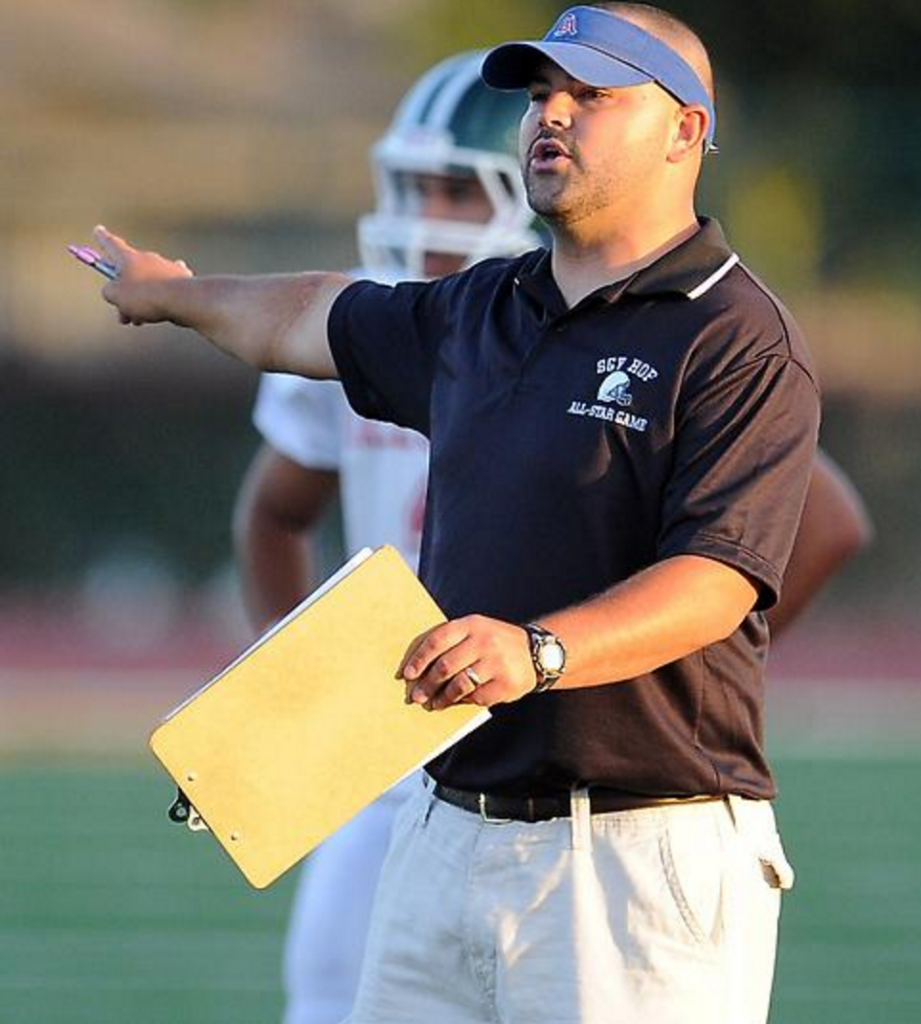 UPDATE: Former Los Altos coach Dale Ziola put out a release on Friday morning explaining his decision to step down after six seasons, the title of which was “My wife and kids miss me, and I miss them.” Ziola went on to explain that the overwhelming duties of coaching combined with being a family man grew to be too much, although he did not rule out coaching elsewhere in a lesser role. Ziola also thanked the six classes of players who helped his run at LA be so successful.

The man responsible for being Los Altos High School’s football program back from the dead has walked away after completing one of the most remarkable turnarounds in recent area history.

Dale Ziola resigned Thursday as Conquerors varsity football coach after six seasons, during which he guided two teams to the CIF Southern Section finals and won a league championship. Ziola was 48-24.

This fall was Ziola’s finest work as he led Los Altos to a 13-1 record and Hacienda League championship. The Conquerors reached the Division 6 championship game before losing to Paraclete last Friday. Los Altos also reached the finals in 2014.

Los Altos is one of the Valley’s most-storied programs, having won 11 CIF championships in 16 finals appearances. The Conquerors had hit hard times before Ziola, a little known coach who grew up outside the area, took over 2011.

In 2010, Los Altos went 0-10. In Ziola’s first year, the Conquerors were the surprise of the town by going 8-4 in a dramatic change of fortunes. Ziola brought some of his own touches to the program, like holding the first practice of summer at midnight.

Ziola said Thursday that he won’t comment on his resignation until Friday. He has looked into other jobs in the past, most recently at California High in Whittier, which is near his home.

Los Altos will also say goodbye to a stellar senior class, which accounted for just about starting position on this season’s roster. Los Altos last won a CIF championship in 2003 under head coach Greg Gano. After Gano left in 2007, the Conquerors turned to former player Felipe Aguilar and then Jim Arellanes, but neither could get anything going.

When life presents you with an opportunity, you grab it by the throat. That’s exactly what Arroyo did in Saturday’s CIF championship win over Rancho Mirage. And that’s exactly why Arroyo is a champion today and for eternity.

What took place on Saturday night was a life lesson as much as it was a championship moment. It’s one that football can teach better than any sport. It applies, or at least it should, to everything you do. For the rest of their lives, the Arroyo football team will know that when you get a chance to create your own destiny, you do it. And you do it with aplomb.

A job you want? Go after it hard.

A girl you want? Go after her hard.

A goal you have? Go reach it no matter what.

A man has to be man enough to do what Arroyo did last night. And he’s got to be man enough to live with the consequences, good or bad, regrets and all. Life will certainly throw its share of curveballs at the Arroyo players in the coming years. But they’re going to better equipped than most to deal with them.

Had Arroyo failed on its two-point try, perhaps some would have questioned head coach Jim Singiser’s decision to go for two. But they’d be wrong. Singiser made the right move, win or lose. He believed in his team. He went against the grain (to a degree) because he thought his line could protect, his quarterback could get outside the pocket and his receiver could make a tough catch going to the ground.

This “gamble” came on the biggest stage at arguably one of the top two or three biggest moments in Arroyo football history. The Knights made their move. It paid off. They’ll now enjoy the spoils forever. Not a bad a trade off. Lesson learned.