“Harry Welch offered me to come two years ago,” Asante said. “He told me if that if I ever had the opportunity, he wanted me to coach with him. And of course, this opportunity came up because I was out of a job. He offered for me to come in.

“It’s just such a great program, I went on and took advantage of it.”

Asante was let go by St. Paul in the middle of last season, his first at the school. He closed the season as an assistant coach at Lakewood. Asante previously had a successful run at Carson, where he beat Mater Dei twice, a fact that may prove useful at Santa Margarita.

Asante does not know for sure what his role on Welch’s staff will be. According to him, there are no titles on the Santa Margarita staff like there would be at a typical high school.

“He doesn’t give titles,” Asante said of Welch. “If you look at this program book, everybody is an assistant coach. It’s kind of a smart thing to do because he’s got like four head coaches on his staff.”

Asante remains a teacher at St. Paul, but is unsure if he’ll continue in that role next school year.

Aram’s take: Well, in the ever-growing recruiting/attracting wars taking place in The OC, this is a big coup for Santa Margarita. The way Mater Dei has been “attracting” talent recently, the stakes had gone up and Santa Margarita will need to keep up. And then there’s Servite and Mission Viejo. Yep, it’s a rat race for talent. Asante will certainly help in that department and don’t be surprised if Santa Margarita gets some high-impact kids in this spring/summer. 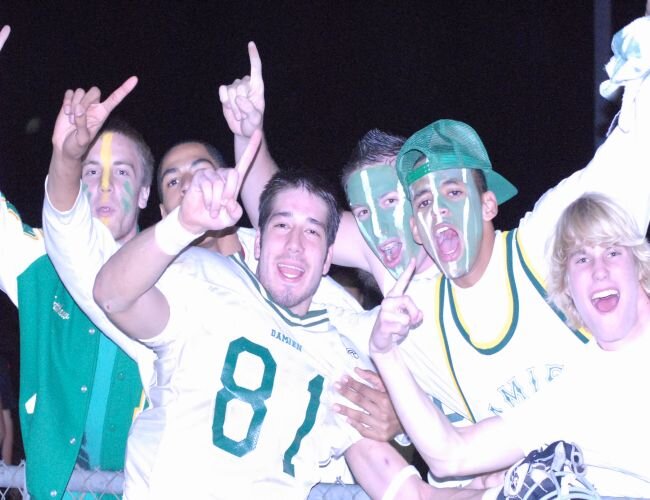 Former Damien standout wide receiver Travis Eschardies, who was a Tribune All-Area selection in 2006, died early Sunday morning following a car accident on the 10 Freeway in Montclair. He was 24.

Eschardies’ Honda Accord overturned and was hit by a Chevy pick up during the accident. Eschardies, who lived in Pomona, was ejected. He later died on the operating room table at Arrowhead Regional Medical Center, according to the Riverside Press-Enterprise.

Eschardies was a three-varsity player for Damien from 2004-06. He had 64 receptions for 1,115 yards and seven touchdowns in ’06 when Damien went 9-3 and swept the Sierra League. He teamed with All-Area QB Mark Mendrun to form the top pass-catch combo in the area that season.

Eschardies was also a reserve on the Damien basketball team.

Aram’s take: Tragic news. Eschardies still attended Damien games … I recall seeing him on the sidelines either this season or last in his varsity jacket. I will never forget showing up for the Damien-Los Altos game in ’06 and having him say “hey, what’s up, big dog?” during warm ups while I was walking the sidelines. He had swag, as former Time Warner personality Reg Miller put it. I really enjoyed that Damien team and they were the last legit good team the Spartans football program has had. Eschardies won’t be forgotten.

Oliva was 17-17 in three seasons at San Gabriel and led the Matadors to the Almont League title in 2011 and a berth in the Mid-Valley Division championship game.

Aram’s take: There were rumors that Oliva would be joining Rick Zepeda’s staff at St. Paul or even headed to Bell Gardens, but him landing at Maranatha is a coup for Karavedas, who is a defensive guy and now just boosted his staff’s offensive expertise. Obviously, Oliva is qualified to be a head coach just about anywhere. Being the Star-News Coach of the Year is a nice thing to have on a resume. So you have to wonder just how much of a long-term thing this will be. If Oliva gets a teaching gig, then he just may be with Karavedas for a while.

Bechtel, who was offensive coordinator for one season after coming over from Colony, replaces Derek Bub, who resigned after five seasons but will remain the school’s athletic director.

Aram’s take: Yes, it kinda takes the fun out of it when people tell you exactly how things will unfold a year ago and then it happens that way. Nonetheless, Bechtel should do a fine job keeping the Chino Hills pipeline rolling.

Hernandez was deciding between Western New Mexico, Humboldt St. and APU. Hernandez, who was at Charter Oak for his freshman and sophomore year before transferring to Damien for his junior and then back to Charter Oak for his senior year, recorded 43 tackles and 11 sacks in 2012.