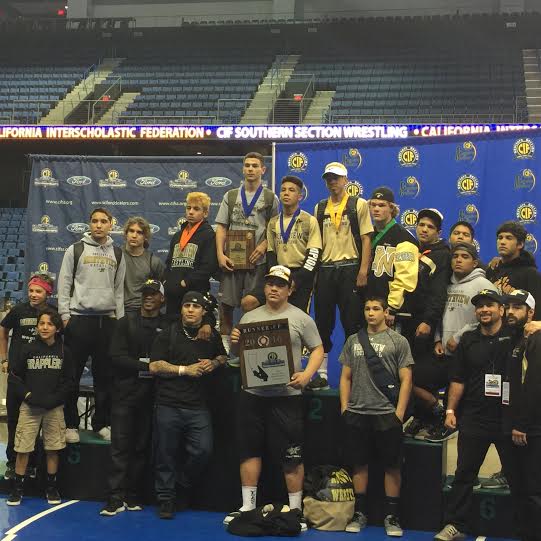 The area qualified 20 to next week’s CIF State championships at Rabobank Arena in Bakersfield. The other area qualifiers were Northview’s Dominick Arellano (113, fifth), Ricky Marin (132, eighth), Steven Comstock (170, fourth) and Gabriel Ortiz (126, ninth); San Marino’s Aaron Padilla (160, eighth); Bishop Amat’s Sidney Flores (113, sixth); Gladstone’s Mario Barios (120, eighth); Walnut’s Micah Maes (160, seventh); Charter Oak’s Vincent Zavala (132, fifth); Santa Fe’s Damian Valdez (106, ninth); Rowland’s Ethan Vistro (195, sixth); California’s James Udell (220, ninth) and South Hills’ Austin Moreno (285, ninth).
Northview led the area and section with seven qualifiers.
“This tournament is so challenging that our mind-set was to just get our kids through and qualified to state,” Northview coach Bobby Bellamy said. “If we had an opportunity to win the tournament, we’d be OK with that. If not, (then it’s OK). I’m very pleased. We got seven kids to state, the most we’ve ever had. I’m extremely ecstatic.”
Casillas was also lower-weight MVP after scoring two wins by fall and one by technical fall. He beat La Quinta’s Joe Avila, 8-4, in the final.
“I wanted to get that two-time Masters championship,” Casillas said. “I just came out with all I had to accomplish my goal.”
Julian Flores, who won at 132 at the state championships last season, had one of more dominant finals, easily beating Mater Dei’s Devin Pacheco, 16-2, to take the 138 bout. He also had two wins by fall en route to the final.
“Winning two Masters titles is a blessing,” Flores said. “My first two years, I didn’t do well, so it’s a blessing. It’s an accomplishment.
“I just tried to take the match myself, and not let someone else control it. I just did my thing, my offense and don’t let him use his offense.”
Evan Wick, who was second last season, used a late takedown to score a 3-2 win over Riverside King’s Luke Troy, who transferred from San Marino.
“I was down by one, so I had to do what I had to do,” Wick said. “I got him with a single leg (takedown). We were (an inch) from being out of bounds, so I had to drag him back in. I finally got him back in, got the takedown, then rode him out for 21 seconds to take the win.”
Serna, ranked in the state top 10 by The California Wrestler all season, made history for the second consecutive week. He’s Northview’s first Masters heavyweight champion after becoming the Vikings’ first divisional heavyweight titlist last week. “It feels great, but a lot of hard work,” Serna said. “It’s a team effort, too. I couldn’t do this without my coaching staff. It’s a great honor. I hope I can win state next week, too.”

Rowland’s dream season ends: The Rowland girls basketball team’s record-setting season came to an end against Agoura on Saturday.
The fourth-seeded Chargers came from seven points down in the third quarter to beat the top-seeded Raiders 43-41 in a CIF Southern Section Division 2A semifinal game.The Raiders (25-3) won more games than any team in school history and made their deepest run in the playoffs since the 1978 squad, which also lost in the semifinals.
“We had a bad home-shooting night,” Raiders coach Quentin Carr said. “That will happen, but hats off to Agora. They played a good and came out with the win.”

How about this finish at La Canada that sent the Spartans to the championship. I”m not sure she got it off in time, but what a heck of a shot.

Baseball
Gabrielino 7, Rosemead 5 — Christian LeRue pitched a complete game, striking out seven, Daniel Brito went 2 for 3 with two RBIs and Brian Chan went 3 for 4 with two runs for the Eagles (1-0).
Bonita 3, Cantwell-Sacred Heart 0 — AJ Woodall pitched a complete game and Nick Peifer and Tommy Delgado both had two hits for the Bearcats (1-0) in a SoCal Baseball Pre-Season Tournament win.

Softball
San Gabriel 11, Eisenhower 2 — Mariah Serna went 3 for 3 and Marissa Cabrera was the winning pitcher to lead the Matadors (1-0) to the Duarte Tournament victory. 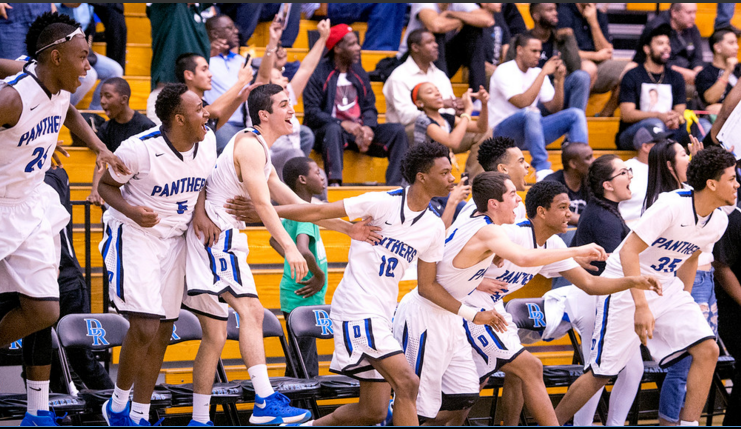 Diamond Ranch holds on to advance to finals: In a fitting ending, Diamond Ranch’s Roman Silva blocked Denzel Holt’s 3-point shot attempt at the buzzer to secure a 48-45 victory and a berth in the CIF Southern Section Division 3A boys basketball finals.
Silva dominated the game on both ends, recording a triple-double with 19 points, 18 rebounds, and 10 blocks.“He (Silva) is the anchor of the defense,” said Diamond Ranch coach Eric Cooper. “And he’s the guy who gets the most attention on offense. He’s our MVP, without him, we go nowhere, he’s a vital part”.

Bonita to play for first championship since 1951: The Calabasas boys basketball team was trying to advance to its third championship game in five years Friday.Bonita had other ideas.
Tyler Poepping scored 23 points and Joe Quintana scored 22 points to lead Bonita to a 67-56 CIF Southern Section Division 3AA semifinal victory.
Not only did Bonita deny the Coyotes a trip to the final, the Bearcats (25-5) atoned for a losing in last year’s semifinals to Gahr.
“We didn’t do it last year and we remembered that,” Bonita’s Anthony Cascarano said. “We weren’t satisfied. We wanted to move on.”

Covina in semis for first time ever: Even when things looked bleak, the Covina High School boys soccer team kept after visiting La Canada in the CIF-Southern Section Division 6 quarterfinals on Friday.The patience and persistence finally paid off for the Colts, scoring twice in a five-minute span to turn the tables, winning 2-1 to advance to the semifinals for the first time in school history. Covina (16-3-3) will face the Cerritos Valley Christian-Desert Mirage winner in the semifinals on Tuesday, but it gets the weekend to celebrate its historic run.

Gladstone’s dream season ends: The Gladstone boys soccer team’s Cinderella season came to an end against South Torrance on Friday.The seventh-seeded Spartans came from behind to win the CIF-SS Division 4 quarterfinal game, 3-1.
The Spartans (18-4-1)will play the winner of the Valencia-Chaparral match next week.“This is a very difficult place to play,” Spartans coach Chad Lagerway said. “It was just a gut check, and it came down to who was most determined.”

Jose Ortega with the game-tying goal for Covina, 1-1 against La Canada pic.twitter.com/5MrnYrjcQJ

Edgar Guadalupe with the go-ahead goal for Covina in the 65th, 2-1 over La Canada pic.twitter.com/LpLODwzGgu

Bonita baseball coach John Knott and South Hills coach Darren Murphy, with help from other area coaches, do a wonderful job putting together one of the best 32-team high school baseball tournaments in Southern California, and includes most of the area’s heavyweights like South Hills, San Dimas, Walnut, Chino Hills, Arcadia, St. Francis, and host Bonita. Check out the schedule, it all begins on February 27. 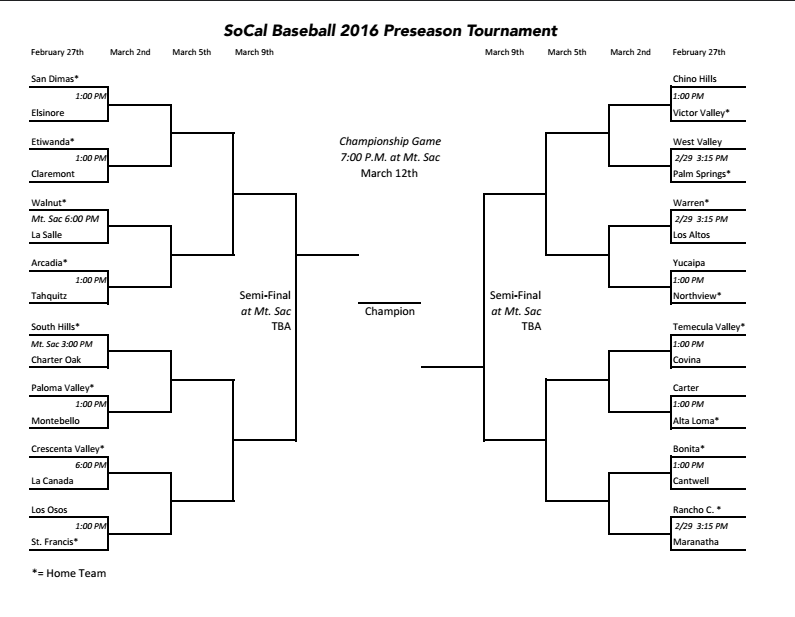