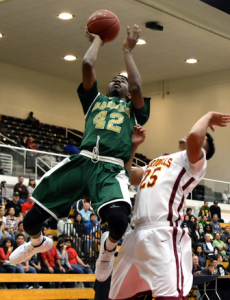 Boys Basketball
Rowland 56, Nogales 47 — Earl Allen earned a double-double with 14 points and 17 rebounds to lead the Raiders to a Valle Vista League victory. Tyler Gachett and Junior Hernandez had 11 points each and Derek Ohara added 10 points.
San Dimas 66, Northview 53 — Joey Erickson recorded 14 points, 23 rebounds, and four assists in the Saints’ Valle Vista League win over Northview (8-14, 2-4). Omar Nasri led San Dimas (9-13, 3-3) in scoring with 23 points and also had a double-double with 12 rebounds. Ryan Ocampa added 16 points and four assists. Northview was led in scoring by Ulysses Aparicio and Adam Winiecki, who each had 11 points.
South El Monte 55, El Monte 38 — Alejandro Berber scored 17 points to help the Eagles hand the Lions just its third loss in the Mission Valley League. Adrian Diaz added 14 poitns and Alex Hernandez had 10 for South El Monte (8-7, 4-3). Justin Lamb had 17 points and Edward Dominguez had eight for El Monte (13-10, 5-3).
Girls Water Polo
St. Lucy’s 19, Glendora 3 — Sabrina Garabet scored nine goals to lead the Regents to a blowout victory over the Tartans at the Bonita Tournament. Hilary Adkins and Seinna Jagieslski each added four goals for St. Lucy’s, and Devin Holcomb had two.
St. Lucy’s 13, Righetti 3 — In the second round of the Bonita Tournament, the Regents earned another comfortable win with six goals from Sabrina Garabet, who also had four assists and three steals. Hilary Adkins had four goals, and Devin Holcomb had two goals and three assists for St. Lucy’s. 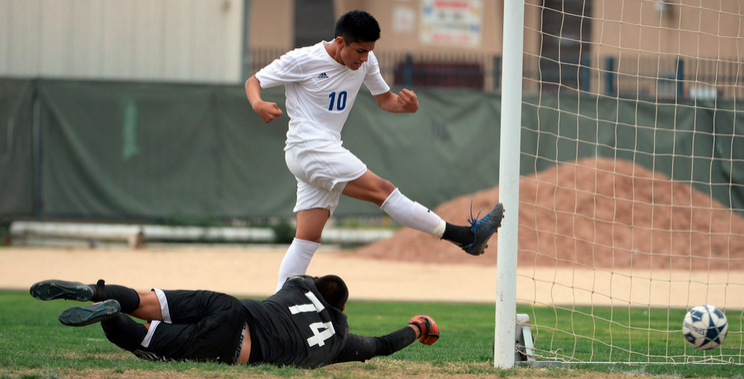 By Jared Pine
EL MONTE — After tying its previous meeting with Mountain View this year, the El Monte High School boys soccer team defeated the Vikings 2-1 with a goal from Ramon Rodriguez in the 77th minute for the Mission Valley League victory at home Thursday afternoon.
The win gives El Monte (10-6-2, 7-1-1) a game and a half lead over Mountain View (9-6-3, 5-2-1) in the league standings. The two teams were nearing their second 1-1 tie this season, but with just three minutes left in the game, El Monte earned a corner kick. The Spartans directed the kick out of the box, but when the ball came back in, Rodriguez was there and put his head on the ball amidst the Vikings’ defensive scramble, knocking the ball just over the line for the go-ahead goal.
Mountain View had a chance to answer in the final minute after Mauricio Rodriguez got a yellow card just outside the box on the goalkeeper’s left side. Valera Moises took the free kick for the Vikings, which was punched out by goalkeeper Jose Paredes. The ball was controlled by Roberto Alvarez, who took one dribble to control the ball and lifted it toward the goal. Paredes jumped up for the floater and knocked it over the cross bar, and Mountain View couldn’t get a shot off on the ensuing corner kick right before time expired. 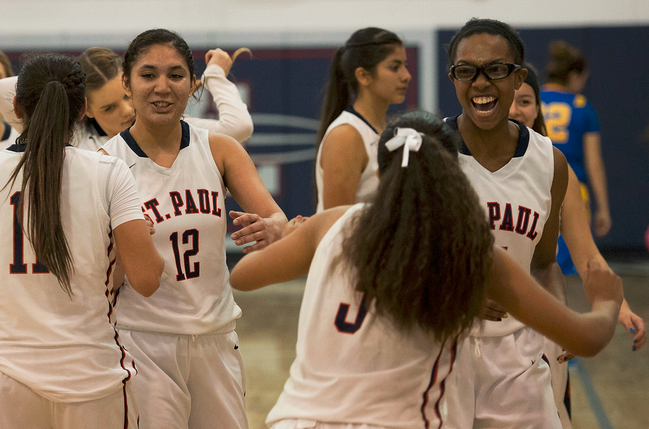 By Stephen Ramirez
SANTA FE SPRINGS — There was no league title at stake when the St. Paul High School girls basketball team hosted Bishop Amat on Thursday. It just seemed that way.
That’s what sweeping your rival for the first time in nearly three decades will do for you, especially one that has had the upper hand in the series.
Clarissa Perez scored 19 points and Adrianna Gonzalez had 14 as the Swordsmen beat the Lancers for the second time, scoring a 53-38 victory in a Del Rey League game at St. Paul.
St. Paul, which won at Amat (69-45) on Jan. 13, improved to 14-10 overall and 2-3 in league play. Bishop Amat, getting 14 points from Jurhandi Molina, slipped to 7-15 and 0-5.

St. Paul, after falling behind, 16-7, after the first quarter, put together a 14-minute stretch in the second, third and four quarters where it outscored the Lancers, 27-4, for a 45-28 advantage late in the fourth. The stretch included keeping Bishop Amat scoreless for more than eight minutes over the final seven of the third and the first of the fourth.

St. Paul’s Clarissa Perez: “It’s a great feeling to sweep Amat. Coach (Robert Miller) said its the first time in 24 years we’ve swept Amat. It’s a great win for us, and I’m very proud of all my teammates.”

Duarte last won the league title in 2008, but the Falcons took a big step in their 3-2 win over the Dons earlier this week, Duarte’s first win against Sierra Vista since that ‘08 season.

“It was a big boost to our confidence, but that game is over,” Duarte coach Chris McMahon said. “We have to beat Baldwin Park for (the win over) Sierra Vista to even matter.”