A look at the first round of Almont League play would lead to the conclusion that the Schurr High School girls soccer team is having a cakewalk. The Spartans (12-2-3) are off to a 4-0-1 start and lead the league by three points.

“It has been really really tough,” she said. “Every game we left the field you think, ‘Whew, we just got by.’ Every team in league is good.”

The La Serna girls began the season 5-4-5 but the Lancers have won all five Del Rio League games by shutout and overall have shut out the opposition in seven of their past eight games.

“We played several different systems of play in the preseason,” coach Amanda Broussard said. “We had a lot of holes where the girls were not healthy or the girls were injured. We tried everything until it figured out for the personnel we have. We literally tried to have players in different spots that they don’t usually play to figure out what works best for the team.”

Pioneer, which entered the week a game behind Del Rio League frontrunners California and Whittier, got a monster game from senior Teran Massengill, who had 33 points and 22 rebounds in a 76-61 win over El Rancho.
The Titans, who are 13-7 overall and 3-2 in league play, hosts Santa Fe on Friday. They are at Whittier next Friday before hosting Cal on Feb. 11.
Cal and Whittier meet at Whittier on Friday with first place on the line. 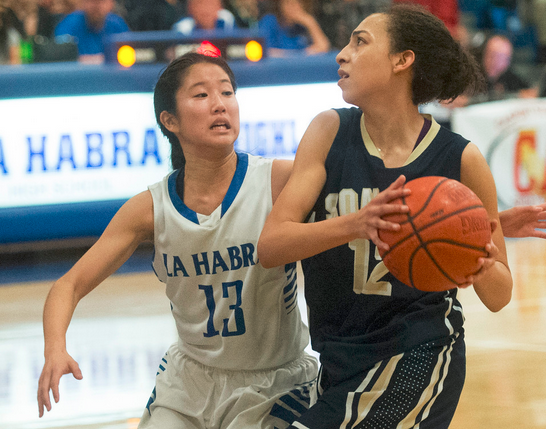 By Stephen Ramirez
LA HABRA — There’s nothing better than beating your rival, and when you throw in league implications, it can be even sweeter.
The Sonora High School boys and girls basketball teams know the feeling after sweeping rival La Habra on Wednesday.
The boys, getting 18 points from Ben Rico and 15 from Josh Rodriguez, stayed in first in the Freeway League with a 72-37 victory over the Highlanders. The girls, getting 15 points from Meghann Henderson and 12 from Marissa Dunn, took over second place in the league with a 47-40 victory over La Habra.