Boys basketball
Whittier Christian 51, Magnolia 31 — Justin Osborn and Jakob Williams both had nine points and Marco Gonzalez had eight points and five rebounds for the Heralds in a Buena Park tournament victory Tuesday. 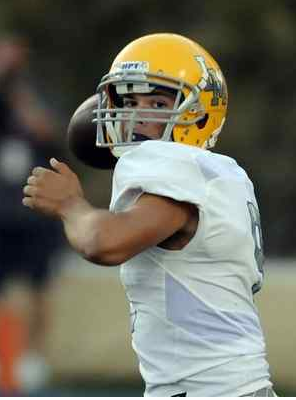 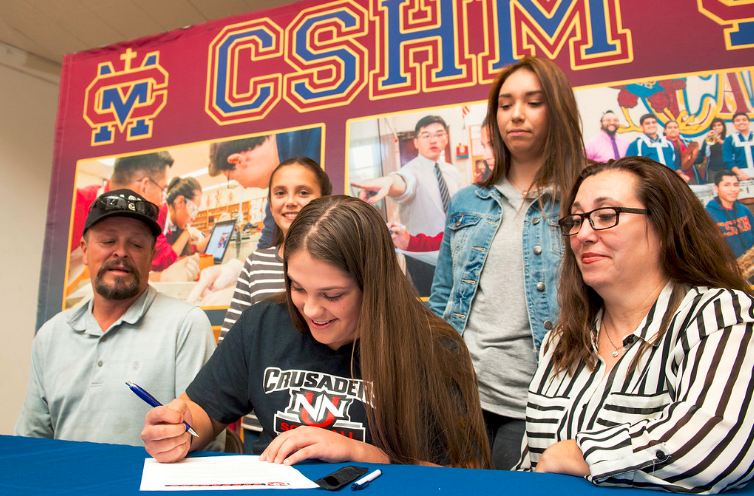 Boys basketball
Santa Fe 65, Foothill 53 — Donny Risper and Matthew Corona both had 22 points to lead the Chiefs to the Coyote Classic Tournament victory.
Los Alamitos 52, Whittier Christian 44 — Justin Osborn had 15 points and seven rebounds and Nico Albertini had nine points and five rebounds for the Heralds in a Buena Park Tournament loss Monday. Jake Williams and Eric Sheets both had six points for Whittier Christian.
La Mirada 73, Jordan 60 — Shermar Morrow had 23 points and 16 rebounds and Daniel Cabrera and Bryce Craver both had 11 points for the Matadores (1-0) in a Canyon/Esperanza Tip Off Classic victory Monday.

Girls soccer
California 3, Colony 3 — Andrea Paniagua, Elvia Villagomez and Lezlie Guerrero each scored a goal for the Condors (0-0-1) in a nonleague game. Goalie Angelica Guerrero had three saves for California. 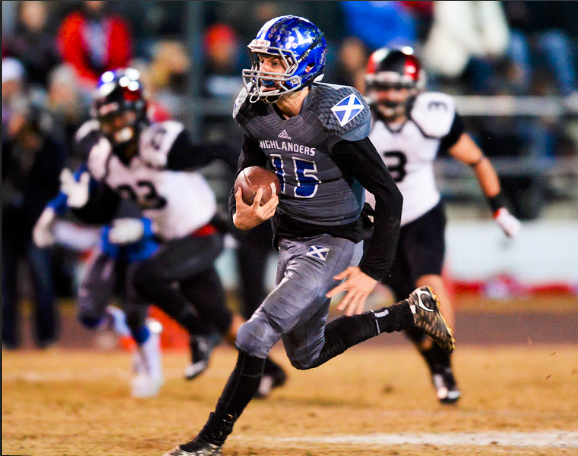 La Habra quarterback Zach Fogel (15) runs for a touchdown on a keeper as they play Murrieta Valley in their CIF semi-final game at La Habra High School on Friday November 25, 2016. (Photo by Keith Durflinger/Whittier Daily News/SCNG)

And then there was just La Mirada, which was the area’s lone survivor in the CIF Southern Section semifinals.
The Matadores advanced to the title round for the second consecutive year, beating Los Alamitos, 36-20, in Division 2. The rest of the area’s final four wasn’t so fortunate. La Habra was unable to stop Murrieta Valley, which scored a 63-42 victory in Division 2. St. Paul lost 21-7 to Norte Vista in Division 7, with Montebello losing, 42-7, to Valley View in Division 11.

Here’s the recaps for Friday’s games
DIVISION 2 MURRIETA VALLEY 63, LA HABRA 42
LA HABRA — Murrieta Valley High School gave up nearly 500 yards and six touchdowns Friday.
But with an offense that was unstoppable, the Nighthawks didn’t really care.
Hank Bachmeier threw for 319 yards and five touchdowns and Murrieta Valley advanced to its first CIF Southern Section championship game with a 63-42 victory over host La Habra in a Division 2 semifinal.
Olita Palmer rushed for 281 yards and four touchdowns for the Nighthawks (11-2), who will host San Clemente, a 41-35 winner over Valencia, in the finals next week.
Zach Fogel accounted for 302 yards and four touchdowns for La Habra (8-5), which was looking to get to its second consecutive division final after winning the Southwest Division title last season.
The Nighthawks scored on their first nine possessions and finished with 702 yards.
Murrieta Valley, which came in averaging 60 points a game during the first two rounds, led 42-28 at halftime.
— Stephen Ramirez 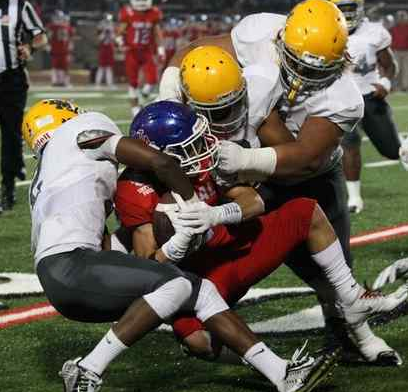 La Mirada’s Elijah Hicks and the Matadores defense take down Los Alamitos Dylan Laurent as the two teams battle it out in the CIF Southern Section Division 3 semifinals on November 25, 2016. (Photo by Tracey Roman for SCNG)

DIVISION 3 LA MIRADA 36, LOS ALAMITOS 20
LONG BEACH — The La Mirada football team’s road to repeat continued after a stellar physical performance in the CIF-SS Division 3 semifinals on Friday night. At Veterans Memorial Stadium, the Los Alamitos Griffins pulled out all of the stops, but the Matadores answered the bell each time to pull out the 36-20 victory.
The Matadores are headed to their second CIF-SS championship game in a row, looking for their second straight title.
“The state championship has always been our goal, but this will be just another stop,” Moschetti said.
La Mirada used its ground-and-pound offense led by running back Nick Hernandez, who wore down the Griffin defense. Hernandez had three touchdowns on the night including a 3-yard plunge to put the Matadores up by 16 and seal the victory late in the fourth quarter. Hernandez was playing with dislocated ribs in the game.
La Mirada coach Mike Moschetti: “I’m proud of our kids that we’re moving on. We’re going to celebrate this, but we’ll be thinking about a CIF title game when we wake up tomorrow.”
— Paul Slater
DIVISION 7 NORTE VISTA 21, ST. PAUL 7
RIVERSIDE — St. Paul was unable to find the balance it was looking for.
The Swordsmen were limited to just 62 yards in the first half of a 21-7 loss to Norte Vista on Friday night in the CIF Southern Section Division 7 semifinals.
Nick Redick gained 93 yards to surpass 1,000 for the season for St. Paul (6-7), but it wasn’t enough as Norte Vista’s Eric Melesio ran for 249 yards and three scores.
“They have a tremendous offense, and we just couldn’t get it going,” Zepeda said. “My hat is off to them. They did a great job stopping us.”
St. Paul’s offense was slow to start, going three-and-out on its first two drives and held without a first down until its third possession.
Cody Cardenas had a pair of pass completions as the Swordsmen started to mount a drive late in the second quarter, but was sacked for a seven-yard loss before being forced to punt.
Trailing 14-0, the Swordsmen finally scored midway through the third quarter when Alfredo Reyes connected with Martin Carradero on a 10-yard touchdown reception.
Melesio, a 5-foot-9, 170-pound senior, rushed for touchdowns of 5, 1 and 3 yards for Norte Vista (11-2), which moves on to the Division 7 championship game next week.
St. Paul coach Rick Zepeda: “In all reality we expected this type of game. I really believed we were going to score more points, but they played great defense.”
— Dennis Pope
DIVISION 11 VALLEY VIEW 42, MONTEBELLO 7
MORENO VALLEY — Montebello’s 10-game winning streak came to a screeching halt on Friday night when the Oilers were overpowered by Valley View 42-7 in the semifinals of the CIF Southern Section Division 11 playoffs.
Montebello, which made the playoffs for the fifth consecutive season, struggled to find its potent offense that led it to the semifinal game and narrowly escaped the shutout by scoring a touchdown from the 1 with 11 seconds to play.
Valley View wasted no time taking control of the game, scoring four times in the first half while holding Montebello to only 35 yards of total offense.
Montebello coach Pete Gonzalez: “We had a great season and overcame a lot of adversity. Valley View executed well, broke the game open early, and they were the better team tonight.”
— Brian Hoss