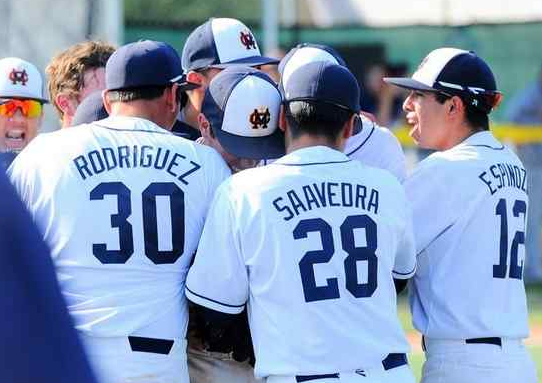 CIF-SS BASEBALL PLAYOFFS
QUARTERFINALS
DIVISION 4
MONTEBELLO 4, EL RANCHO 2
MONTEBELLO >> Edgar Velasquez did it all for the Montebello High School baseball team Friday.The senior pitcher knocked in the go-ahead run in the sixth, then put out a rally in the seventh to send the Oilers to their first CIF Southern Section semifinal game in more than three decades with a 4-2 victory over visiting El Rancho in a Division 4 quarterfinal.
Velasquez and Noah Fuerte each had two RBIs for the Oilers, who improved to 21-11 and will host No. 2 seed Kaiser, a 3-2, winner over Santa Fe, in Tuesday’s semifinals at 3:15 p.m. Jose Guerrero and Vince Fuentes had two hits each for the Dons, who finished 17-15.
El Rancho, which had advanced with an upset over No. 3 seed West Torrance in the first round and beat Apple Valley in the second, had a chance to tie it in the seventh after loading the bases with one out. But Velasquez, who gave up eight hits and struck out two, induced Bobby Banuelos to ground into a 6-3 double play to end the game.
Velasquez gave the Oilers a 3-2 lead in the sixth when he followed a one-out double by Andres Munoz with an RBI double to left field for the one-run lead. Fuerte then hit the third double of the inning to push it to 4-2.
Montebello coach Manny Arana: “We knew it was going to be a tough ball game. Everyone who showed up got their money’s worth. It’s just exciting for us to move on. Somebody had to win, and fortunately, we found a way to pull through at the end, even though it was a little more exciting than I wanted it to be.”
El Rancho coach Frank Llanes: “We had our chance. We had bases loaded. Unfortunately, we got on top of a ball (and hit into a double play). Today, both teams didn’t lose, but one of them (Montebello) won.”
Montebello’s Edgar Velasquez: “It feels great. It was tough at the end, but we got through it. I knew if I don’t do it (in the seventh), it messes up the game. (It happened against Schurr), and I didn’t want that to happen (again). I focused and threw what I needed to throw.”
— Stephen Ramirez
DIVISION 2
Redlands East Valley 15, La Mirada 7
REDLANDS >> After the Redlands East Valley baseball team knocked off No. 2 seed Gahr on Tuesday, head coach James Cordes walked off the field with a hint of worry over his offense, an offense that was averaging 1.8 runs over its last four games.
But on Friday that worry seemed like a distant memory as an offensive dam broke open for Redlands East Valley in a 15-7 win over La Mirada High, advancing to the CIF-SS Division 2 semifinals for the first time since 2009.
The Wildcats (22-7) racked up 16 hits and scored at least four runs in three separate innings, including six in the fourth to take a seven-run lead. La Mirada had eight hits, committing just one error.
La Mirada coach Jimmy Zurn: “They were just a little bit better than us today. We gave up some free bases and (Jakob) has been special all year but they got some hits and were fortunate to have some runners on the base when they did.”
— Chris Trevino
DIVISION 4
Laguna Beach 3, Cal 2, 12 innings
WHITTIER ­>> Taking care of the small things has become a way of life for the Laguna Beach High baseball team.The 12th ­inning of Friday’s CIF­-SS Division 4 quarterfinal game against California was just another example.Alex Baker led off the inning with a walk. He was sacrificed to second by Jack Loechner. Baker then moved to third on a groundout to short by Connor Coscino.
Jack Simon followed with a groundball to second that should have ended the inning, but the ball got by the second baseman, allowing Baker to score what proved to be the winning run, giving the Breakers (18­-12) a 3­-2 road victory in 12 innings over California (20-­10) at Rio Hondo College.
Cal coach Tony Nieto: “(Josh Lambert’s) our closer and he was up to his 70 pitches. We stretched him out. He actually had one inning left, we were going to take him out two innings before, but he wanted to keep going out there. The way the game was going, I figured we might as well use up all of his innings.”
— Damien Calhoun
Kaiser 3, Santa Fe 2, 8 innings
SANTA FE SPRINGS >> A dramatic throw to the plate by Fontana Kaiser right fielder Justin Wells cut off the potential tying run at the plate in the bottom of the eighth inning, helping the Cats hold on for a 3-2 victory over Santa Fe in the CIF Southern Section Division 4 quarterfinals Friday.
Kaiser junior left-hander Armando Duenas outdueled Santa Fe’s Robert Luci. Duenas, who brought a 9-0 record into the game, praised Wells’ searing throw to catcher Leonardo Rodriguez afterward.
Chiefs coach Pierre Romo argued that Rodriguez blocked the plate, and that baserunner Alex Martinez should have been ruled safe, but Rodriguez disagreed.
— Obrey Brown
DIVISION 5
Cantwell-Sacred Heart of Mary 7, Paraclete 5 innings
The Cardinals scored three runs in the seventh for a 5-3 lead, then two in the eighth to win it and advance to the semifinals.
They will host Citrus Hill, which beat No. 3 seed Village Christian, in Tuesday’s semifinals.
TUESDAY’S SEMFINALS
DIVISION 4
Kaiser at Montebello
DIVISION 5
Citrus Hill at Cantwell-Sacred Heart of Mary 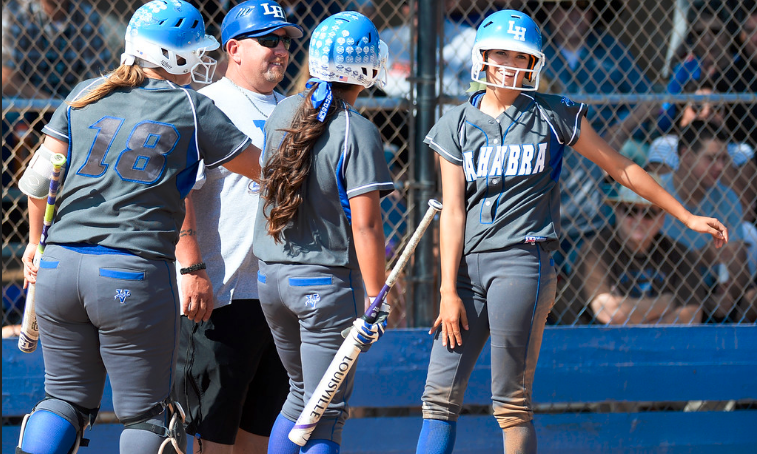