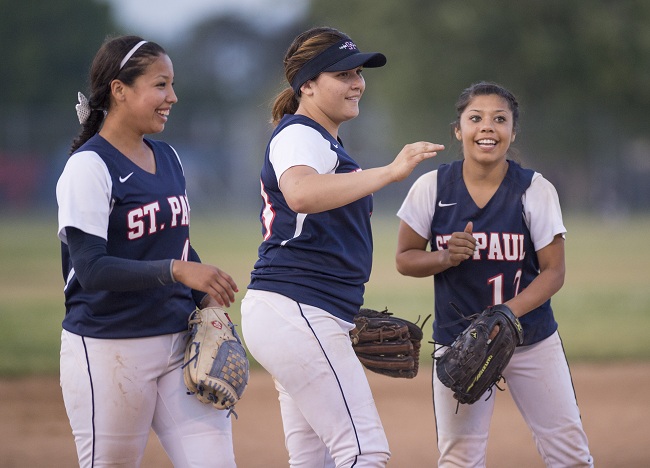 The host Swordsmen dropped the opener 12-6 but won the nightcap 11-9.

Lovie Lopez paced the Swordsmen (7-4) with two hits and five RBIs. Krystal Gutierrez had three hits and an RBI.

Five players drove in runs for La Serna (7-6), which was led by Molly Bourne’s three RBIs. Raeanne Martinez and Dana De La Torre each drove in two runs for the Lancers.

“For us to face them and put up a lot of runs gives us a lot of confidence,” Argott said. “We were struggling to get on base but our runners definitely got on base today. I’m very proud of them. The girls were happy with their swings.

“I told them to keep up that same confidence and to continue to hit the ball hard.”

The second game was a roller-coaster in which La Serna jumped out to an early 4-0 lead after its first two at-bats.

Here is this week’s area top five rankings:
1. St. Paul (6-3) – The Swordsmen, who split a doubleheader with Acalanes, visit Brea Olinda on Thursday.
2. California (4-2-1) – Defending Del Rio League champions host Pioneer and Whittier this week after opening with a 6-6 tie at La Serna.
3. Montebello (4-2) – The Oilers are off to a quick 2-0 start in the Almont League.  They host El Rancho today before resuming league play Friday at San Gabriel.
4. El Rancho (3-3) – The Dons started Del Rio play off on the right foot on Friday by defeating Santa Fe 4-1. After visiting the Oilers, El Rancho will travel to Whittier and La Serna later this week.
5. La Mirada (4-5-1) – The Matadores open Suburban League play this week against Cerritos. They visit the Dons on Wednesday before hosting them on Friday.