St. Paul High School’s girls volleyball team finished its regular season strong and its efforts paid off in the end.

It was the fourth consecutive victory for the Swordsmen (13-10 overall, 6-2 league).

“The girls did such a tremendous job,” St. Paul coach John Van Deventer said. “At the midway point of the season, I told them to take each game like a playoff game and they did.”

Kelly has paced the Swordsmen with 342 kills this season while Ariel Bonderov has 308 to place second on the squad.

Saenz has recorded a team-high 767 assists.

“We suffered early season injuries but we stuck it out,” Van Deventer said. “We have a great group of kids and we’re peaking at the right time.”

The Swordsmen, who are ranked No. 10 in the latest CIF-Southern Section Division 4AA poll, will now direct their focus on the postseason. The CIF-SS girls volleyball playoff pairings will be announced on Saturday. 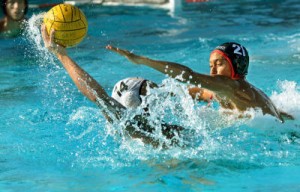 WHITTIER – The Whittier and La Serna boys water polo teams squared off in the Del Rio League season finale Tuesday with a championship at stake.

“I knew that (Whittier coach Rilesh Desai) would have these guys ready for this game for awhile,” La Serna first-year coach Jim Armstrong said. “We knew they were going to come out breathing fire especially in front of their crowd. They did and we were ready for it.”

Whittier (12-14, 4-1) and La Serna (21-6, 5-0) traded shots early as both goalies, junior Ben Gorncharenko of the Lancers and junior Levi Meza of the Cardinals, stopped point-blank shots and the Whittier defense kept the game close.

La Mirada High School resumes its football schedule on Friday after having two weeks off.

The Matadores had an unexpected week off when Suburban League foe Cerritos canceled its season and then had their scheduled bye last week.

La Mirada, which is ranked No. 1 in the latest CIF-Southern Section Southeast Division poll, is anxious to get back on the field after playing its last game on Oct. 12 when it defeated Glenn 51-9.

“We’re excited to get back under the lights this Friday,” La Mirada coach Mike Moschetti said. “Mayfair has had bad luck this year but they have great athletes. We’re looking forward to the opportunity to compete against them. We have to be ready to go and play four quarters of football.”

Matadores senior quarterback Gerry Myres is putting together an impressive season, completing 70.3 percent of his pass attempts for 1,499 yards and 19 touchdowns while throwing only one interception.

The Chiefs will host the winner of today’s wild-card game between El Segundo and Hesperia.

La Serna, Whittier and El Rancho are the other Del Rio squads that also qualified for the Division 4 playoffs. All three will play wild-card games at 2 p.m. today.

The second-place Lancers will host Mayfair, the Suburban League’s third-place team. If La Serna, No. 10 ranked in Division 4, defeats the Monsoons, it will travel to Delphic League champion Windward for a Wednesday first-round match.

Whittier, the league’s third seed, will take on Knight, which finished third in the Golden League. That match will be held at Whittier’s Palm Park, 5703 Palm Ave. If the Cardinals prevail, they will visit Garden Grove League champion Garden Grove on Wednesday. Garden Grove is rated No. 4 in Division 4.

El Rancho, which earned an at-large berth, will travel to Norwalk, No. 2 ranked in the Suburban League. With a victory, the Dons will play Wednesday at Redlands, which won the Citrus Belt League crown and is ranked No. 3 in Division 4.

All Wednesday first-round contests are scheduled to start at 2 p.m.

The SGVN is switching blog format from what we use now to WordPress. This is part of a broader company-wide initiative. The switchover is scheduled to start Tuesday morning and may take a couple of days. Sorry for any inconvenience this may cause, but we expect to be back up and running in plenty of time for Thursday and Friday’s action.