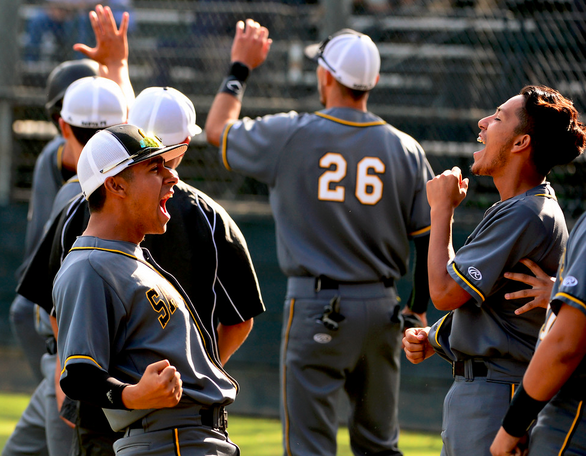 Santa Fe bench reacts after an RBI by Raul Ramirez (21) in the fifth inning of a prep baseball game against California at Rio Hondo College in Whittier, Calif., on Wednesday, March 30, 2016. Santa Fe won 1-0. (Photo by Keith Birmingham/ Pasadena Star-News)

WHITTIER >> Santa Fe High School, after coming up short last season, took the early advantage Wednesday in the race for the Del Rio League baseball title.
Robert Lucia tossed a one-hitter and Angel Delgadillo scored on an errant throw in the fifth to lead Chiefs to a 1-0 victory over defending champion California at Rio Hondo College.
Lucia also struck out eight and walked just one for the Santa Fe, which improved to 7-7 overall and 2-0 in league play. Josh Lambert gave up five hits and an unearned run for the Condors, who slipped to 8-6 and 1-1.
“It’s just the second league game,” Santa Fe coach Pierre Romo said. “We’re here just to battle and compete. We don’t look at it as a pick up (game) or anything. It’s just another game. It’s a long way to go.”
Santa Fe, which had runners on during the first four innings, finally broke through in the fifth. The Chiefs, after singles by Erik Espinoza and Jorge Centeno, had runners at first and third with two outs. Raul Ramirez then hit a grounder to short, which resulted in an errant throw to second that allowed Delgadillo to score for a 1-0 lead.
Lucia took it from there. He gave up a single in the first and a walk in the second before retiring the next 12.
“I just felt comfortable,” Lucia said. “I had a strong defense behind me. That’s what kept me going, my strong defense behind me.”
Cal had a chance to tie in the seventh. Jake Carmichael led off with a hit by pitch and was sacrificed to second.
Mike Elliott then hit a fly to right field that was dropped by center fielder Jakob Huerta, but he quickly recovered and threw out Carmichael at third. Elliott took second.
“Jake is a late-game replacement,” Romo said. “We know he can fly out there; we know he has an arm. It was just a mishap. But the kid’s got an arm. He put it on the money and that’s how she wrote.”
Lucia then ended it when he induced Eric Sotelo to ground out.
“Their a good club,” Cal coach Tony Nieto said. “We had this battle last year. But last time I checked, this is only game two. We still have 13 games left. They are a good club, but we’re a good club too. The next time around, we’ll have another dog fight with them, and it’s going to be a great series.”

Baseball
El Rancho 4, La Serna 3 — Jason Vela had a game-winning single for the Dons (7-7, 1-1) in a Del Rio League victory. Vince Fuentes pitched a complete game, striking out seven and Rick Rizo went 2 for 3 with an RBI.
Santa Fe 1, California 0 — Robert Lucia a one-hitter, striking out eight to lead the Chiefs (7-7, 2-0) to the Del Rio League win.

Baseball
La Mirada 7, Alhambra 0 — Dante Mancia pitched a complete game for the Matadores (9-4) in a St. Paul Easter Tournament victory. Julian Zermeno went 1 for 2 with a stolen base for Alhambra (7-6-1).

Baseball
La Mirada 6, Mayfair 1 — Jakob Gonzalez pitched a complete game, striking out 10, Kevin Kendall hit a three-run homer and had five RBIs and Daniel Jung had three hits for the Matadores (8-4, 2-0) in a Suburban League victory.

Softball
Whittier Christian 9, Bell Gardens 1 — The Heralds (4-7) scored five runs in the first inning. Morgan Ryan singled in a run in the inning. She went 2 for 4 with two runs scored. Ally Udell gave up one hit in the win. Justine Nieto, Hailey Gallegos and Udell all had RBI singles.