Zaki, 29, has terminated his contract with the last two clubs he has played for.

Guess we’ll soon find out whether this is an April Fool’s Day joke or Galaxy coach Bruce Arena has had a chat or two recently with Egypt national team coach Bob Bradley.

Don’t look now, but much-maligned Chivas USA are the highest scoring team in MLS and sit second in the Western Conference just above the defending champion Galaxy.

Staff Writer Phil Collin asks whether this is an early-season novelty act or represents a new reality for the club after Saturday’s win over Vancouver in Carson (featuring one lucky Chivas USA goal and one well-taken strike) in his game story.

And a class last-gasp goal it was too, capping an entertaining game that had a little of everything: defensive errors on both sides, excellent goals by both teams, the return of Landon Donovan, Mike Magee building on his cult-like status with yet another goal and fine performances by attack-minded local youngsters Jack McBean and Jose Villarreal.

Galaxy coach Bruce Arena did not blame central defender Omar Gonzalez for failing to shut down the Toronto attack that led to their second goal:

“It was a long week,” Arena said referring to Gonzalez’ starring role for the U.S. against Mexico earlier in the week. “He can see he was a little bit tired at the end.  It’s a lot of games and a lot of travel.  It’s not surprising his legs were heavy in the second half.

“He had to run more today than he did on Tuesday in Mexico.  He did well, the whole team obviously as a defensive effort by the U.S. team was outstanding.”

Donovan conceded he has some work to do after missing a chance he usually would have put away as a matter of routine just seconds after coming into the game, but also appears to have rediscovered his zest for the game:

“I gave away a lot of passes that I wouldn’t normally give away,” he said.”I’m just not sharp in a soccer way and I’m probably going to need a week or two and then that will come back. … It was a lot of fun.  I haven’t felt that way playing in a very long time.  That was the desired goal when I stepped away and it was nice to be back.”

Suddenly hot Chivas USA has a chance to convince potential fans they are a credible club at 7:30 this evening against the Vancouver Whitecaps in Carson. Preview.

Robbie Rogers, who grew up in Rolling Hills Estates before finishing high school in Orange County, has given his first interview in his adopted England since coming out as gay a few weeks ago.

Published the day after Galaxy star Landon Donovan gave an honest and at times raw account of his search for mental health during his recent sabatical from the sport, the interview recounts Rogers’ struggles to come to terms with his sexuality given his public personna as a athlete and the rampant homophobia seen in men’s soccer.

I’ve drawn parallels between Rogers and Donovan before and do so again here in part because Rogers said in the interview he might seek to train with the Galaxy. Hopefully coach Bruce Arena and the supportive likes of Donovan will make that happen because if Rogers has any hopes of re-starting his soccer career his home here in Southern California may well be the place to do it.

Rogers has received criticism in some quarters for retiring from the game — although it’s unclear whether he has stepped away for good — but Donovan’s cry for more acceptance of mental health issues Wednesday resonates even more this morning in light of  Rogers’ interview. 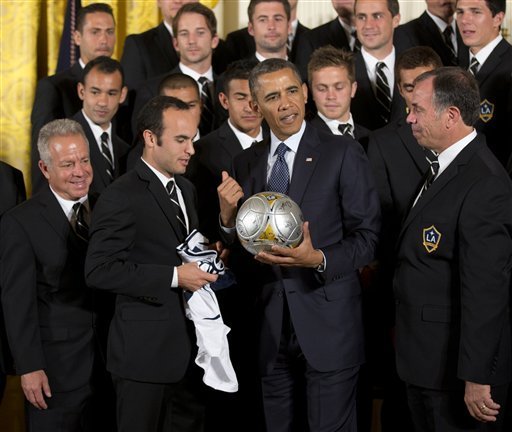 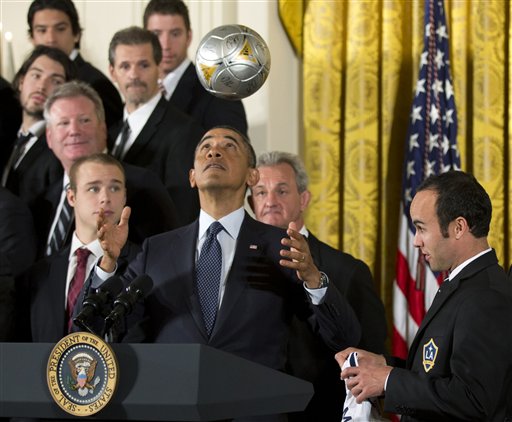 Cult hero Mike Magee also took the opportunity to complain about “meanie” coach Bruce Arena to kids after the ceremony:

Magee: “After games it’s hard to sleep & some days our coach is a meanie and makes us come in for training the next day after games.”

U.S. coach Jurgen Klinsmann doesn’t sound fazed by the criticism he and his team faced last week ahead of the Costa Rica game and now it’s his Mexican counterpart on the hot seat after blowing a two-goal lead against Honduras.

Where are you going to watch this one — and with who?

I definitely told a guy that I had plans tonight and I was too busy to go out with him.And by plans I mean #USAvMEX.#SorryImNotSorry.

You can watch the ceremony, which will also the NHL champion LA Kings, beginning at 10: 35 a.m. here.

Those of you who follow me on Twitter already know Landon Donovan will rejoin the team for the occasion. Presumably, Donovan will stay with the two-time defending MLS champion for its road trip that includes a game Saturday in Toronto as he works toward match fitness.