Was at beloved Ebberts Field in Brooklyn in July 1959 at the former home stadium of the Dodgers (who had fled to LA two years earlier), according to the Society for American Baseball Research (scroll to the bottom of the article for a list of the soccer games played at the venue).

It was actually two games a few days apart.

In 1959 Di Stefano, Puskas and Gento led a history-making squad that had won four consecutive European Cups. They would win their fifth that same season, but the team returned to the United States first. President Santiago Bernabeu’s Real Madrid made history again by playing on the baseball field of the former Brooklyn Dodgers (now the Los Angeles Dodgers). The Whites thrashed Austrian team Graker 2-6, following the win with a match against a squad of Austrian-Hungarian exiles living in America. The Whites picked up another win (0-8) in front of 26,000 spectators.

And yes, it appears that Real Madrid got the name of their Austrian opponent incorrect in the article, which was likely Sturm Graz.

For those who may not know, Real Madrid will play at Dodgers Stadium Saturday in the opening game of a doubleheader that will be aired live on Fox. 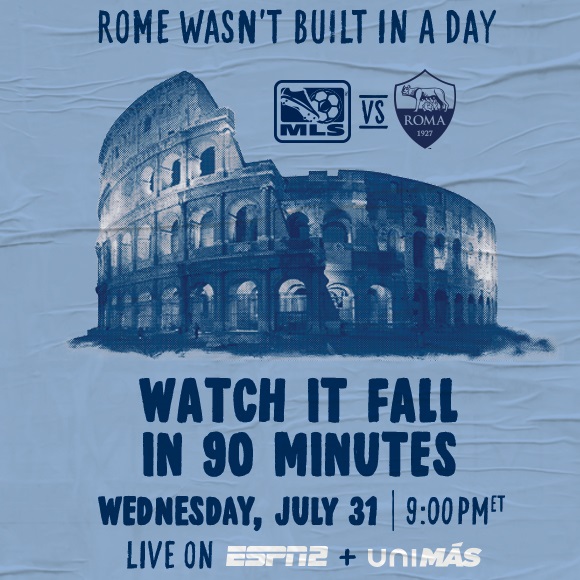 The game has very little to do with soccer and everything to do with (allegedly) entertainment.

Which may be why someone thought this video was funny.

And if you liked that, then check out this.

Finally, find out what the Galaxy’s Landon Donovan will reflect on as he lays on his deathbed (really) here.

More than twice as many American soccer/futbol fans watched Univision’s coverage of the U.S. Gold Cup victory over Panama Sunday compared to those watching in English on Fox.

Fox announced today that an average of 2.4 million viewers watched the game on the channel, tying the figure for the networks’ most -watched soccer game ever, the 2011 UEFA Champions League final.

That translates into a rating of 2.4 and a share of 4 (which means 4 percent of all television sets turned on at the time were tuned to Fox).

However, an average of 4.9 million fans watched on Univision — and, of course, Mexico wasn’t even playing.

The eight-team tournament started this past weekend and comes to Los Angeles this Saturday night with a doubleheader involving for of the participating teams.

It should be noted that tickets started at $25 (and there weren’t many at that price), but are considerably more expensive today.

Dodgers beat writer J.P. Hoonstra has more on the transformation of Dodger Stadium for soccer.

The club hopes Robbie Keane is fit enough to participate in one of these games in the tournament as he returns from injury.

Galaxy coach Bruce Arena often complain about these kinds of friendlies (never mind that its the club who schedules them tomake extra money), but in this instance could do with a bit of a break so that key players like Robbie Keane and Robbie Rogers (hamstring) have a chance to recover from injuries:

“You can always justify it being good or not so good: the heat of summer, coming off  a grind, how (the tournament) is thrown in the middle of important upcoming games, but given the options I think it’s a good break in some ways for us from the league at this stage and getting some of our guys wo have been hurt back, the Robbies  and Omar (Gonzalez) and Landon (Donovan)…  I think all in all its pretty good.”

Chivas USA lost, the Galaxy lost and Landon Donovan was a big winner for the U.S. at the Gold Cup as we head into the All-Star break (such as it is) and the Guinness International Champions Cup doubleheader Saturday at Dodger Stadium.

More on that latter competition in Tuesday’s column.

Seattle provides a thoughtful video preview for Sunday’s 8 p.m. contest against the Goats while the Galaxy throw their usual melange of sound bites together (Pablo Mastroeni doesn’t have anything more insightful to say about a club he spent so many years at, really?) ahead of their 4 p.m. game in Colorado that’s live on ESPN2.

In related news:
*The Galaxy announced Friday that the club has agreed to loan defender Bryan Gaul and midfielder Kenney Walker to the Fort Lauderdale Strikers of the NASL through the end of the year. Neither has played an MLS minute for the Galaxy this season.
*The arrival of Carlos Bocanegra at Chivas USA has made 31-year-old Peruvian center back Walter Vilchez, whose contract expires at the end of the month, surplus to requirements, the club announced Friday.He made 11 apperarances this season in that terrible back three (or four).
*Look what familiar former Chivas USA face is training with the Sounders.

*You knew MLS would find a way to add perennial All-Star Landon Donovan to the roster for Wednesday’s game against Francesco Totti and Roma in Kansas City, although I’m sure the plan wasn’t to do that at the expense of Robbie Keane, who suffered an injury against Portland July 13 and missed the subsequent game against the Whitecaps.

Donovan, of course, is in sparkling national team form at the moment at the Gold Cup and his selection is yet another milestone in his career, observes MLS:

This is Donovan’s League-record 13th consecutive All-Star selection dating back to 2001, his first season in the league. While donning a Galaxy jersey, the Redlands, Calif. native has been selected to the MLS All-Star game nine times. Since returning to the Galaxy in late March, Donovan has tallied three goals and six assists in 13 appearances helping to lead the Galaxy to a 10-8-3 record with 33 points.

Commissioner Don Garber made the decision to add Donovan to the roster for the game.

“Landon (Donovan) is a great addition to the MLS All-Star team. Obviously his form is fantastic right now and his impact and representation of Major League Soccer throughout his career is immeasurable,” All-Star head coach Peter Vermes said.

*Meanwhile, the new Ontario indoor soccer team has announced its name and logo (why so angry?) a name longtime soccer fans may remember from the days of the NASL.

President Bernie Lilavois was formerly involved with the now inactive Anaheim Bolts and the expansion Fury have essentially replaced them in the Professional Arena Soccer League.

*Finally, defender Carlos Bocanegra helped Chivas USA to a shutout win in his first game with the club, which is now his priority with his national team days likely behind him at this point in his career.

The big names are all there from the likes of Real Madrid, Juventus, Everton and the Galaxy (and the other participants, too, but these are the four teams that will play an Aug. 3 doubleheader at Dodger Stadium as part of the tournament): Alonso, Ozil, Ronaldo, Buffon, Howard, Donovan, Keane (if you need these players’ first names, I’m guessing you won’t be rushing to buy a ticket).

Of course, expect to see many of these stars for 45 minutes or so per game as they work themselves into shape for the new European season.

For the complete rosters and more information on the tournament, click here.

Landon Donovan has three goals and six assists in 13 appearances for the Galaxy in 2013.

But for the U.S. Donovan has seven Gold Cup assists and a team-leading seven goals in six games since rejoining the national team set-up after scoring twice and creating the opener in a 3-1 win over Honduras Wednesday to send the U.S. through to a 1 p.m. Sunday Gold Cup final (live on Fox and Univision) against Panama, who upset Mexico for a second time in the tournament in Wednesday’s other semifinal.

The likely upshot of Wednesday’s results: Donovan will rejoin the U.S. World Cup qualifying campaign, while El Tri will seek a new coach.

Notable: The Gold Cup winner qualifies for a playoff against the winner of the 2015 tournament to determine the CONCACAF entrant in the 2017 FIFA Confederations Cup in Russia. 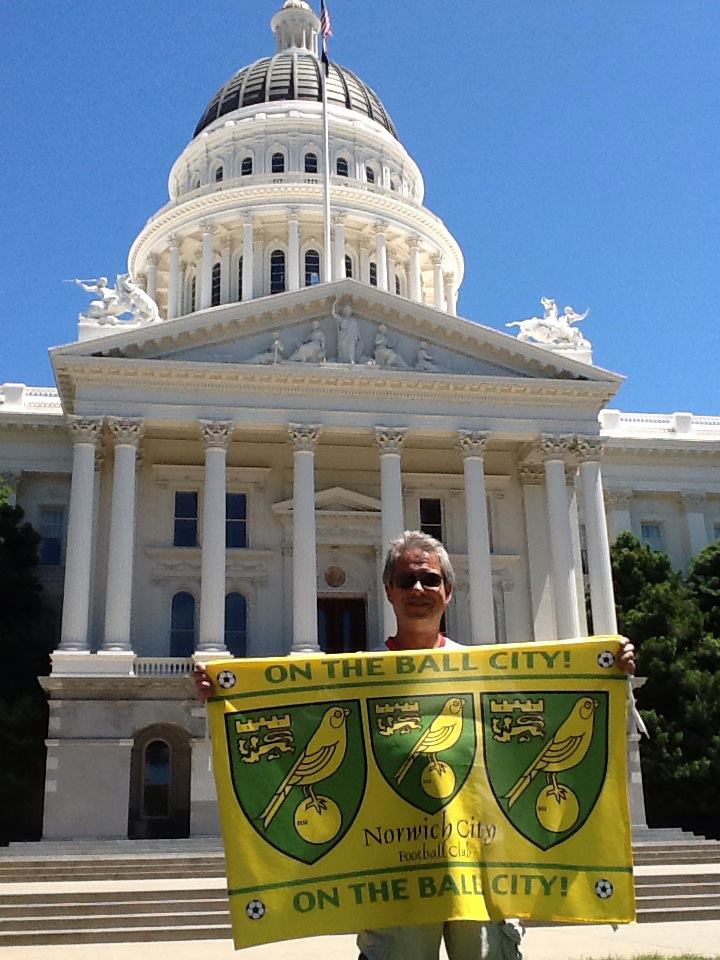 Fanboy: Why the 100 Percent Soccer blog was on hiatus.

Before I was a journalist, I was a soccer fan.

Still am as this photograph taken last Thursday in front of the Capitol Building in Sacramento indicates.

Last season was difficult to watch, as City struggled to remain in the EPL, with a long run of discouraging results not helping matters (Chivas USA fans, I know how you feel, in a sense).

Still, I hadn’t seen City play live since the club visited Seattle back in the mid-1980s, so I jumped at the chance for a little soccer and craft brewery road trip, mixing in a Thursday game in front of a capacity crowd at Sacramento’s Raley Field against Mexican second tier opposition and one the following Saturday in San Jose against the Earthquakes at one of my favorite venues, Buckshaw Stadium.

In truth, the experience was much better than the actual quality of play on the field with City slow and out of shape, while clearly coming to grips with an influx of new players.

It’s precisely why preseason games are strictly for hardcore fans.

While I was roving the state, the Galaxy got back on the winning track (conceding an early goal is always better than conceding a late one), Chivas USA actually won a game against a team even worse than they are and Landon Donovan was drawing rave reviews for his play with the the U.S. at the Gold Cup.

Oh, and the Galaxy signed a 30-something French player from Chivas USA, which smacks of grasping at straws to me to deal with on-going midfield issues Robbie Rogers has yet to solve, but coach Bruce Arena likes known, veteran quantities he hopes to squeeze a little more out of.

Gold Cup action resumes tonight in Texas with both the U.S. and Mexico in action.

Me? I’ll be watching my Canaries take on the Timbers in Portland in the final game of their U.S. tour.