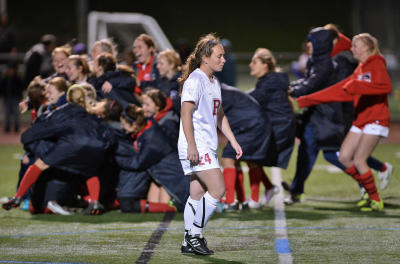 We get letters (well, emails).

Sergio Medrano, a teacher and head coach and founder of the boy’s varsity soccer team at Animo Leadership Charter High School, emailed me this week in an effort to make clear the local affiliation of Inglewood’s Jose Villarreal of the Galaxy, below left, and Lawndale’s Rafael Baca, below right, of the San Jose Earthquakes (and Loyola Marymount) ahead of their game Wednesday in Carson.

This is a school proud of its products. And rightly so. Medrano wrote:

In advance of the ‘Quakes and Galaxy game this Wednesday I couldn’t help but set the record straight in regards to Jose Villarreal, the current home grown Galaxy signee, as well as current ‘Quakes midfielder Rafael Baca.

I know it was reported previously that Jose graduated from Leuzinger High in Lawndale, but he actually never graduated from there and only attended Leuzinger for two months to make up some credits. He actually attended Animo Leadership for 3 1/2 years from his 9-11th grade and part of 12th grade before ultimately receiving his diploma in 2011.

Although Jose never played for Animo Leadership because he participated in the U.S. Development Academy, I felt compelled to set the record straight since I’ve known Jose and his family since 2002 when he was 8-years-old.

We are very proud to have Jose and Rafael, two professional soccer players in the MLS, come out of Animo Leadership Charter High School in Inglewood.

To have them both present at Home Depot Center this Wednesday as professionals brings great pride to our program and school.

Although Jose will not see time on the first team this game and Rafael Baca most likely will get the start, we are still going to show up and support them both. As a school we have sold over 200 tickets as a fundraiser benefiting the Animo Boy’s Soccer Program in support of both players.

We will be sitting in Sections 118 and 117 cheering on Rafa and Jose.

I’ll have more later on today about the Galaxy, Chivas USA and (hopefully) Seatlle Sounders’ injury issues after training.

It does, however, sound like Seattle Coach Sigi Schmid has first-choice back-up (yes, you read that right) goalkeeper Chris Eyelander available for the big game against Chivas USA at Home Depot Center.

Here’s a little preview from the Seattle Times this morning on the import of the game.

Meanwhile in the stupid coaching tricks department we apparently have North (Torrance) High School’s boys soccer coach Matt Chavez getting fired the same day he was named Daily Breeze Coach of the Year, CD Guadalajara Coach Omar Arellano receiving a pink slip after just 17 days on the job (and right before this weekend’s SuperClasico against Club America), while once and future Mexico Coach Javier Aguirre was formally introduced Thursday and immediately sought to downplay expectations by saying he was no Superman. Good luck with that tactic, Javier.

Finally, MLS gets under way early this weekend with a 4 p.m. game today between D.C. United (1-1-2) and New England (2-0-1) so those of you with fantasy soccer teams (he reminds self) get your starting lineups in order.

Here are your other (selected) options both on TV and live at Home Depot Center this weekend:

It will be an all MLS SuperLiga final with the New England Revolution, 2-0 winners over bad losers Atlante tonight, playing the Houston Dynamo Tuesday in Boston.

I only watched the last 10 minutes of the game (work intervened), but that was enough to see some ugly scenes at game’s end for the second consecutive SuperLiga semifinal.

Five red cards (!) were brandished at Atlante players (several after the game) in what was a nasty conclusion.

And it was clear in the waning moments of the game Atlante were simply trying to get in some lumps with behind the legs two-footed tackles, late challenges and body checks.

(BTW, for those who don’t know things got rambunctious at the end of Tuesday’s Pachuca-Houston Dynamo game, too).

The silver lining for Chivas USA? They got knocked out by a team in the final of the tournament.

Well-moderated discussion of the game here.

*Galaxy rookie Bryan Jordan is going on loan to the USL Portland Timbers for the third time this season – until the end of the season. Will he be missed? From the Galaxy:

Jordan leads the Galaxy Reserve Team in goals this season, scoring four times in five games, including one in Monday’s 2-2 draw with FC Dallas.

*And for those with nothing better to do at 8 p.m. Monday tune to Fox 11 to see whether the winner of the “Choice Male Athlete” award at the 2008 Teen Choice Awards is David Beckham, Kobe Bryant, LeBron James, Eli Manning or Tiger Woods.for the award. Woo hoo!

“We had six, seven, great chances in the second half that we don’t connect on and the final pass isn’t good enough or the shot goes straight to the goalkeeper. We didn’t manage to break them down. They had one play in the second half and that’s it. We were solid defensively. We didn’t give too many things away. That’s how it goes.”

Over in Galaxyland, Bryan Jordan has joined the Portland Timbers on loan.

From the (edited) Galaxy press release:

For just $65 per person, fans can purchase the package which will include one ticket to the Galaxy’s game against their Northern California rivals, round trip transportation from Home Depot Center to McAfee Coliseum and admittance to a special Galaxy Travel Package Tailgate, with complementary food and beverages, which will be held in the parking lot of McAfee Coliseum prior to the game.

Following the game, buses will depart from McAfee Coliseum at 10:30 p.m. and are scheduled to arrive back at Home Depot Center at 5:30 a.m. on Sunday less than nine hours prior to the start if the U.S. National Team’s inaugural 2010 FIFA World Cup Qualifying match against Barbados, which begins at 2 p.m. at Home Depot Center.

Tip of the hat to fans who attend both games.

From the LMU press release:

Loyola Head Mens Soccer Coach Paul Krumpe is one of 14 former students who will be included in the inaugural class for the West High School Hall of Fame in Torrance. Krumpe and the rest of the class will be inducted at a dinner and ceremony on Friday at Los Verdes Country Club in Rancho Palos Verdes.

Krumpe is a 1982 graduate of West High School and went on to start all four
years for UCLA, co-captaining the 1985 NCAA Championship team. He then
featured on both the national and international level for the next six
years. He was a member of the U.S. National Team from 1986-1991, earning
more than 40 caps while playing in the 1990 World Cup, the 1988 Olympics,
and the 1987 Pan-American Games.

Since becoming the head coach at LMU in 1998, Krumpe has compiled a record
of 90-85-20 while leading the Lions to four successive NCAA Tournament
appearances between 2001-2004.

Garcia, who attends Oakmont High, was co-MVP of the Sierra Foothill League in 2008 and was the MVP in 2007.

Late blogging today, since the day job got in the way – apologies.

And the PDL Ventura County Fusion, which plays Friday night against the Fresno Fuego at home, has released UCLA striker Jason Leopoldo.

Back Friday morning with a full preview of the weekend’s games.

The Daily Breeze today named Banning’s Guillermo Beltran as its Boys Player of the Year and Banning Coach Frank Sandoval as its Boys Coach of the Year.

Mira Costa’s Julia Barrow was named Girls Player of the Year on Tuesday along with Girls Coach of the Year, South Torrance’s Brad Gomez.

Chivas USA plays the Houston Dynamo tonight in San Antonio (although due to the state of the field there it’s reportedly the reserve squads that will play) and the Galaxy plays the third and final game of its Asian tour live on Fox Soccer Channel at 11 p.m. Saturday (that’s a time that screams TiVo).

Still, if you only watch one game this weekend make it Brad Friedel’s Blackburn Rovers against FulhamAmerica at 7 a.m. Saturday on FSC as the London team with a large contingent of Americans fights for EPL survival.

The David Beckham Academy in Carson has redesigned its Web site.

And as of Monday, Fox Football Fone-In has moved to a new night and time (the show begins at 5 p.m.).

Finally, prep action from the Daily Breeze is here and here, the Daily News here and the Long Beach Press-Telegram here.

Mexico’s Under-23 team, which will play its Olympic qualifiers in Carson, turns out for its final warmup game against Finland tonight in Dallas and hasn’t looked good.

Lastly, preps news from the Daily Breeze is here, the Daily News here and the Long Beach Press-Telegram here.

In Downey Saturday, Wilson and San Clemente shared a championship as did Mayfair High and La Mirada, but Downey High lost.