Tacked on as a postscript to a story regarding a Redlands restaurant swap (Papaya Bay moving into the old Mikan/Wild Rocket space, Pieology moving into Papaya Bay’s old location), we learned that Roberto Argentina announced Tuesday via Facebook that today (May 31) would be the last day of business for Farm Artisan Foods.

Good luck getting a reservation.

END_OF_DOCUMENT_TOKEN_TO_BE_REPLACED 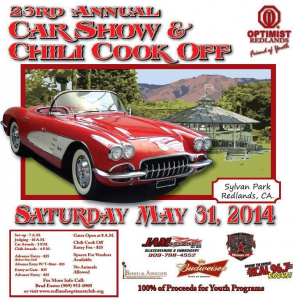 Admission is just $3, and free for kids 12 and younger.

If you go, be sure to look for education reporter Beau Yarbrough, who will be competing in the chili cook-off.

Today for lunch, I had my first (and likely last) sandwich made by Guido Sciortino, soon-to-be former owner of Guido’s Pizza and Deli in Rancho Cucamonga.

You see, Guido is retiring at the end of this month after 57 years of serving sandwiches and Italian delicacies.

While I was in the shop, munching on a couple of slices of complimentary salami, Guido mentioned that in the last couple of weeks he has seen lots of people that he hasn’t seen in years come into the deli to wish him well in his retirement.

Apparently, word has gotten around.

END_OF_DOCUMENT_TOKEN_TO_BE_REPLACED

Southern California McDonald’s restaurants have brewed up a new McCafé beverage and are offering buy-one-get-one free drinks to help promote it.

The new drink — the Horchata Frappé — is made with vanilla, a hint of cinnamon and coffee, and topped with whipped cream and caramel drizzle.

For a limited time, guests can get two Horchata Frappés (or any McCafé beverage) for the price of one during McCafé Social Hour, from 2 to 5 p.m. daily.

McDonald’s restaurants can be found throughout the Inland Empire. 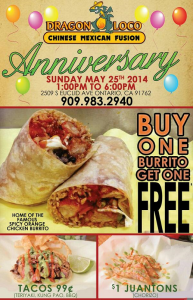 Congratulations to our friends over at Ontario’s Dragon Loco Chinese Mexican Fusion, who are celebrating the restaurant’s second anniversary today (May 25)!

Guests have several deals to choose from, including $1 chorizo “Juantons,” 99¢ tacos (teriyaki, kung pao or BBQ) and buy-one-get-one-free burritos.

If you haven’t tried Dragon Loco, this is a perfect opportunity to do so at a bargain price. 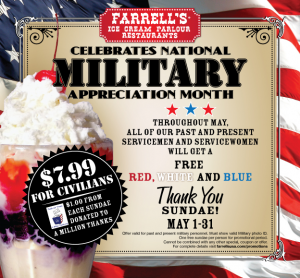 This month, military folks can get a free sundae at Farrell’s Ice Cream Parlour.

Through May 31, the restaurant is celebrating National Military Appreciation Month by giving a free Red, White and Blue sundae to all current and former military personnel.

Civilians can purchase the sundae for $7.99 and Farrell’s will donate $1 to A Million Thanks, a nonprofit military support organization.

Congratulations to our friends from Pine Haven Cafe and Catering, who are celebrating the cafe’s two-year anniversary.

However, it’s the cafe’s guests who are getting the presents as the restaurant is giving away a free short stack of pancakes to all from 7 a.m. to 3 p.m. Saturday (May 17).

END_OF_DOCUMENT_TOKEN_TO_BE_REPLACED

Congratulations to Rancho Cucamonga’s Suite 106 Cupcakery. The two-time Cupcake Wars-winning bakery was recently included in a list of the top 101 cupcakes in America, according to The Daily Meal.

Hitting the list at No. 31, it’s the highest-rated cupcakery in Southern California, beating out Palm Springs’ Over the Rainbow Cupcakes, which is ranked at number 94, Beverly Hills’ famed Sprinkles Cupcakes at number 88 and Glendale’s Goodie Girls at number 41.

Lazy Dog Restaurant and Bar has released numbers for this year’s Thin Mint milkshake fundraiser for the Girl Scouts of America.

The fundraiser, which took place in February and March, raised $5,249 for the Girl Scouts.

The chain donated $1 for each limited-edition shake ordered in its 12 SoCal locations (and sole Northern California location) to the organization.

END_OF_DOCUMENT_TOKEN_TO_BE_REPLACED 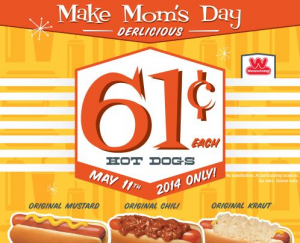 Is your mom a cheap date? We found what we think is the cheapest place to take your mom for Mothers Day.

The hot dog chain is offering 61¢ mustard dogs, chili dogs and kraut dogs on Sunday (May 11).

For that price, you can splurge and also get her a card.

Wienerschnitzel locations can be found throughout the Inland Empire.