Following up on my Wednesday column, Friday’s has more on the Chino Valley Unified School District controversy regarding board member Andrew Cruz. My mistake: Although there was no immediate response, the board president fired back at him a minute later in the meeting. Also, it turns out that Cruz’s comment about having his rainwater tested for chemicals probably relates to a conspiracy theory about so-called “chemtrails.” For those uninterested in all this — do such people exist? — there are three Valley Vignettes and a rundown of recent posts here. 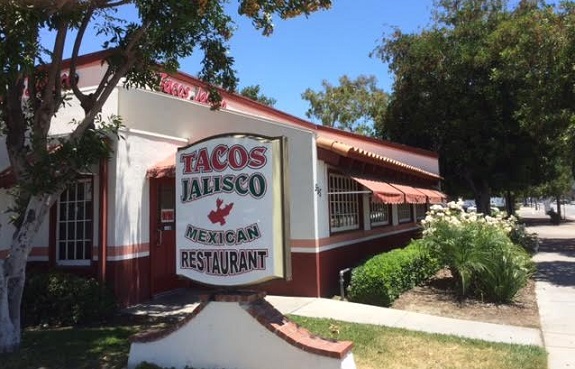 Appearances can be deceiving. For years I’ve driven past Tacos Jalisco, housed in a dull-looking restaurant that might well have begun as a Spires, and assumed it was a sit-down restaurant of dubious quality. Although the reference to a particular state in Mexico (Guadalajara is its capital) should have tipped me off that this wasn’t going to be a downscale El Torito.

A taco-loving source at City Hall, which is nearby, surprised me by telling me Tacos Jalisco might have the best tacos in Pomona, up there with De Anda. As I’d say De Anda and Tijuana’s Tacos are my favorites, this was credible information. (We would hope for no less from City Hall.) We walked there for lunch so I could judge for myself.

The entry from Mission was as disappointing as it looked from the street — although one is conflicted about knocking gentility.

“From the street,” my source agreed, “this place looks a little too nice to have the real thing.”

Inside, though, it turns out you order at the counter and sit in molded-plastic booths. This was more like it. For whatever reason, I had expected waitresses in costumes. It’s relatively nice inside, and clean. The menu has tacos, burritos, quesadillas, sopes and, on weekends, menudo and birria, and beverages include champurrado and aguas frescas.

My source got a chorizo taco and al pastor burrito (below); I got four tacos ($1.24 each): al pastor, asada, carnitas and chicharron, plus a horchata ($1.40), meaning my entire lunch was $6.92. These were excellent tacos, and four made a good meal. A standout was the carnitas, which was redolent of porkiness. If they’d slaughtered the pig out back a half-hour before, it wouldn’t have surprised me (except code enforcement works close enough to have put a stop to that).

I returned a month later for an al pastor burrito (around $6; final food photo) and a Mexican Coke. An excellent cheap meal.

Best tacos in Pomona? Fistfights have started and friendships ended on lesser questions. Tacos Jalisco at this point is in my triumvirate alongside De Anda and Tijuana’s. But wait, what about Lily’s? Oh. What comes after a triumvirate? 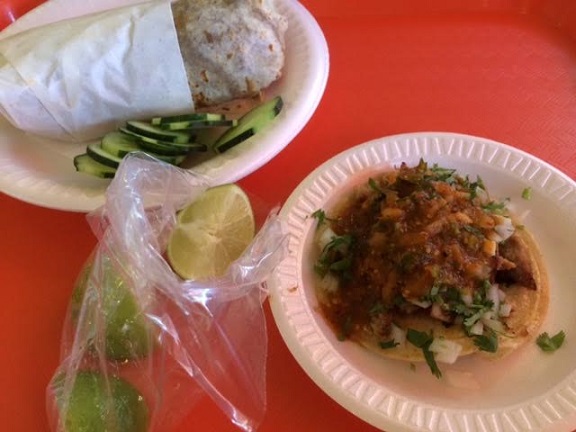 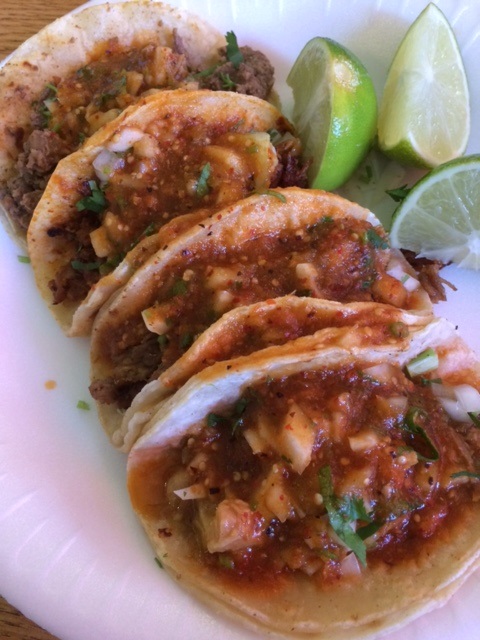 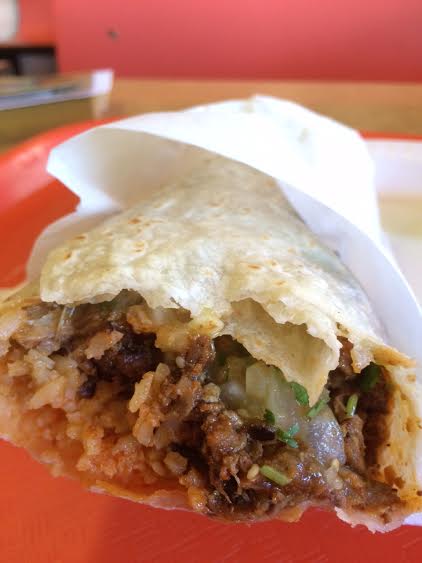 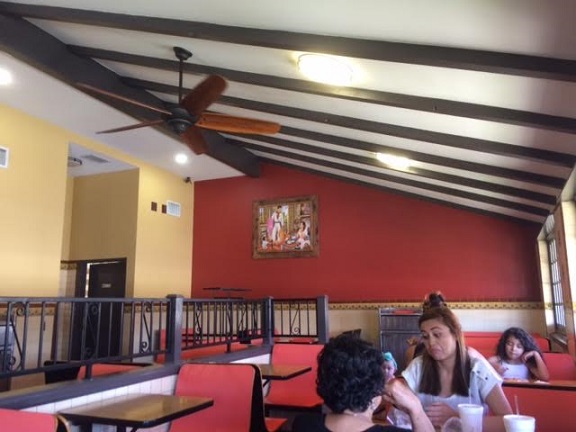 Wednesday’s column starts with the latest from the Chino Valley Unified school board, where one member made the TV news for a nine-minute monologue at a recent meeting on a multitude of hot-button topics. From there, I’ve got three Culture Corner items (two involving Debbie Reynolds — how about that?), two examples of the 909 in the news and even more. 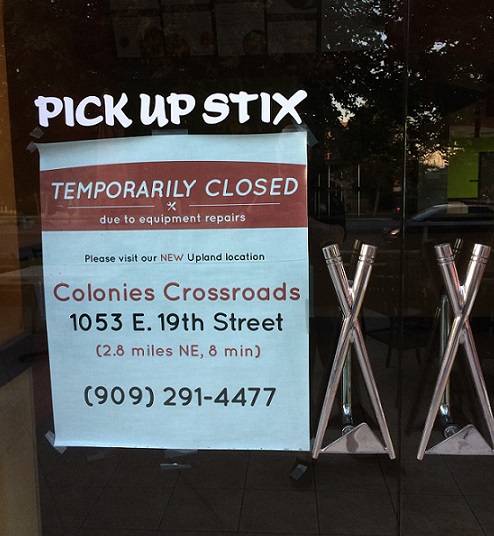 Occasionally I would eat at the Pick Up Stix at 131 W. Foothill Blvd. in Upland, especially before City Council meetings. On April 28, after bowling nearby, I drove up, hungry, and found this sign: “Temporarily closed due to equipment repairs,” with a note that there’s a new Upland location at the Colonies shopping center.

Turns out the Foothill location is permanently closed. It’s about to become home to a Lebanese restaurant, Mes Amis. Was the sign an example of denial?

I’m reminded of a New Orleans restaurant that used to operate in Montclair. The landlord canceled the lease and sold the property, but the restaurateur claimed to me that he didn’t know anything about it. After the last day, a sign was posted on the door that the restaurant was “closed for remodeling” — not long before the building was demolished. 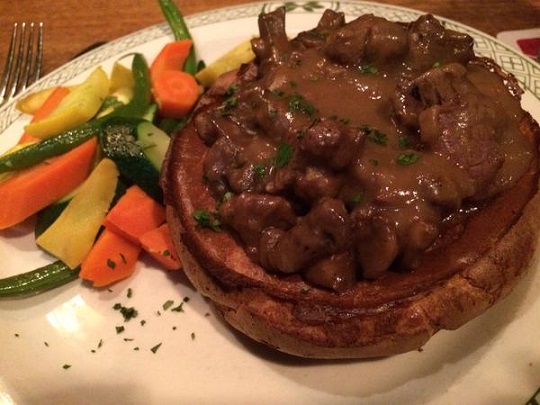 Some friends and I made an inaugural visit to the Tam o’ Shanter, a Los Angeles restaurant. The Tam (2980 Los Feliz Blvd.) opened in 1922 and is said to be the city’s oldest restaurant in its original location and owned by the same family. (It’s also said by Jonathan Gold to serve the city’s best classic cocktail, the Moscow mule.)

I saw toad in the hole on the menu and couldn’t resist. I’ve never had one, and what a great name. It’s described as filet mignon with onions, mushrooms, burgundy wine sauce and Yorkshire pudding. I couldn’t picture it but was ready to be surprised. And was.

Yorkshire pudding, it turns out, is basically a puffy pastry. I don’t know what the toad is, and didn’t see any holes, but I liked it. That said, if I return, and I may someday because the Scottish theme, cozy setting and history make the Tam a unique spot, I’d probably opt for something different; one friend got a hand-carved prime rib sandwich on an enormous poppyseed bun.

What is toad in the hole? My understanding is there are various versions, and the American style can differ from the original British. The Simply Recipes site says the English version is sausages in Yorkshire pudding, while the American is “an egg cooked in the hole cut out of a piece of bread.” You’ll note that these two dishes have absolutely nothing in common.

One reason for my interest is the old stand at the L.A. County Fair named Toad in the Hole. It was there from 1933 until 2008, when it was bulldozed. The stand’s motto was “The Aristocrat of Foods.” Its last decade, it was Toad in the Hole Pizza, which seems less aristocratic somehow. As for what the stand served, Charles Phoenix said it was “filet mignon tucked inside baked potato,” while a Fair spokeswoman said it was “a piece of toast with an egg fried inside it.”

It’s not surprising these recollections differ, is it? Anyway, above is the Tam o’ Shanter version, below is the Tam’s sign and at bottom is the Fair’s stand, as seen on the Panoramio website by Pomona’s Danny Mac. 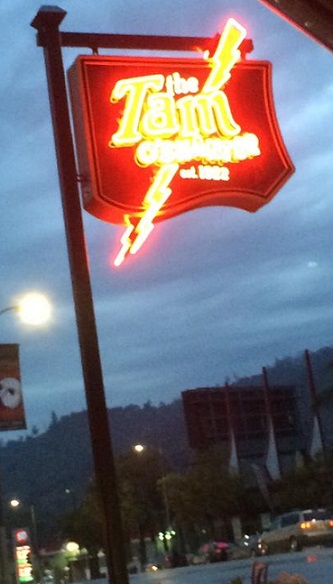 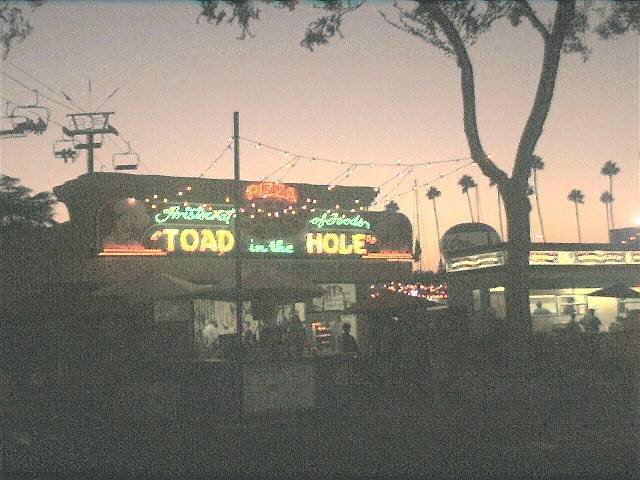 Sunday’s column reports on the last two (!) Ontario City Council meetings. (I had to watch one on video.) They’re starting to act up again, which will teach me to abandon them for Chino.

Friday’s column starts with news for classic rock fans: Doors drummer John Densmore is headed to Claremont for an appearance Saturday at Rhino Records. After that, I’ve got three Culture Corner items (from Claremont, Pomona and Ontario) and three items about local filming. 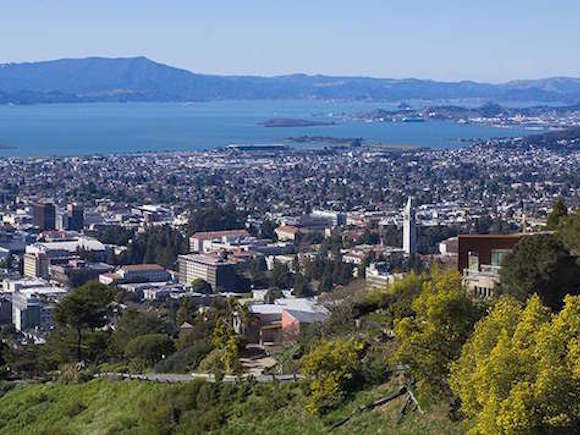 Reader Erik Griswold drew my attention to a Special Olympics web page for Claremont, one of the host cities for the 2015 Games. Its picture (see above) shows a much wetter college town than we’re used to. “Looks like there’s been some flooding in Claremont since I was last there!” Griswold exclaimed. Anyone want to try identifying this photo? Might be a different Claremont. 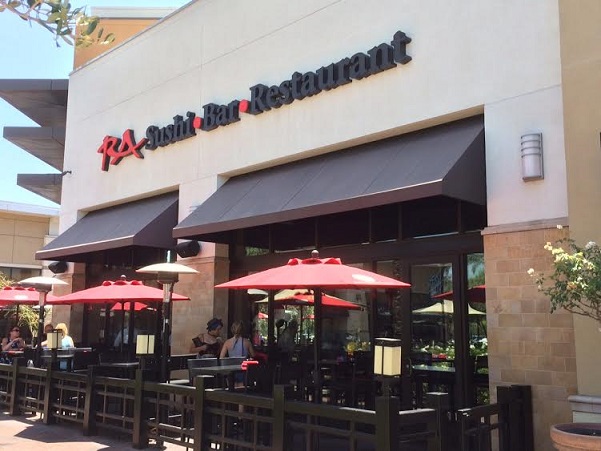 Some people rave about the RA happy hour (3 to 7 p.m.); I went with friends a few years ago and wondered what the fuss was about. I suppose I’m kind of a purist about these things, and RA seemed too much like a party place, not a Japanese restaurant.

But a friend wanted to meet there recently for dinner, and so five of us converged on the Shoppes one Saturday night. It was warm enough that we got a table on the patio, which wraps around two sides of the wing-like exterior.

Gazing into the distance, the green hills of Boys Republic across the way were visible, giving the sense that the mall was nestled in a rural area. Not entirely true, but not entirely false either. I do like the Shoppes, and there’s a Barnes and Noble a few paces from RA.

We got a bunch of rolls, photographs of which I believe are in descending order below: lobster salmon ($13.45), with lobster, mango, avocado, cucumber, topped with salmon, lobster and lobster cream sauce; crazy monkey ($10.25), with smoked salmon, mango and cream cheese; Viva Las Vegas ($13.60) with crab, cream cheese, tempura batter, topped with spicy tuna, crab and piece of fried lotus root; and rainbow ($12), a California roll with tuna, yellowtail, shrimp, salmon and avocado arrayed “to look like a rainbow,” the menu explains.

These were all pretty good, actually. Viva Las Vegas with its crunchy and smooth textures was described by one person as the best specialty roll she’d had. I don’t know if I had a favorite, but maybe the lobster salmon. I also had a scallop nigiri ($5), fine.

There’s alcohol too. Somebody ordered the Umami punch ($18), 60 ounces (!) in a giant glass, meant for two; everybody had some. Even I took a couple of sips.

RA is still kind of a party place, by which I mean it comes off as the Yard House of sushi, but it proved a convivial spot to hang out with friends. The interior is snazzy. There’s better sushi in Chino Hills, which is to Asian food what Pomona is to Mexican food, but RA is OK. 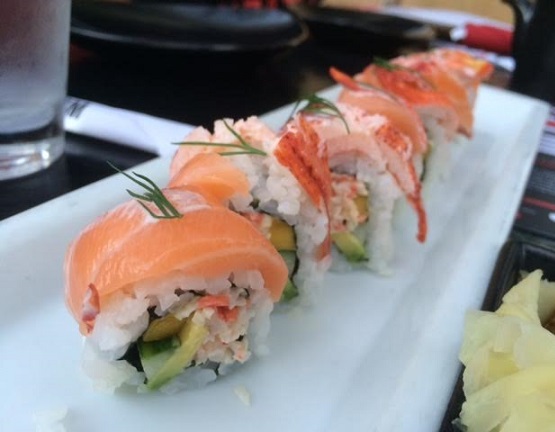 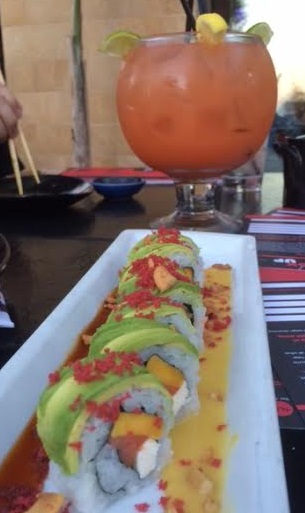 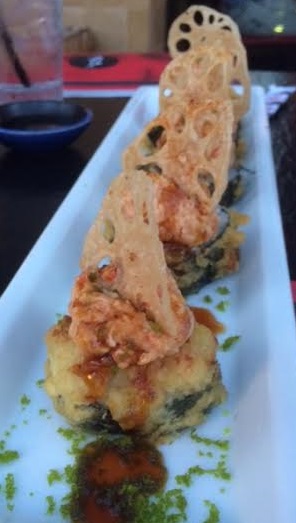 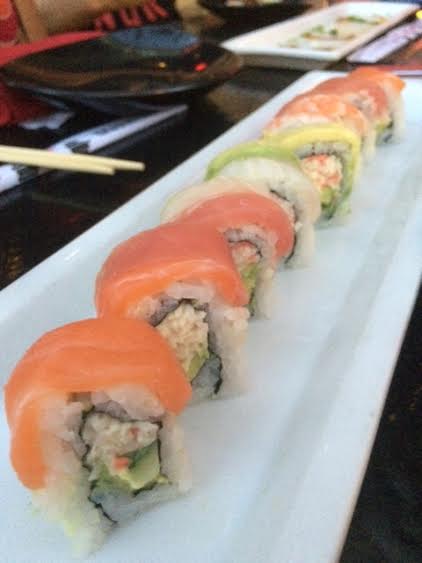 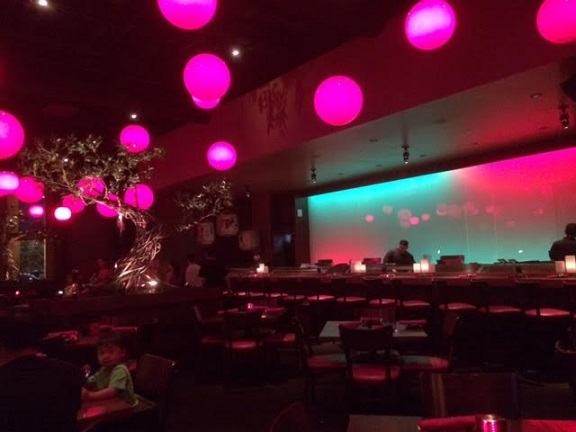 Wednesday’s column breaks some news about Dennis Yates, the mayor of Chino, who plans to retire from the City Council when his term ends in 2016. He was first elected in 1992. The council is remarkably stable, without a new member since 2001. But that will change with Yates’ retirement.