I take a look back at my life, and our collective lives, at year’s end. The photo is of me literally shaking my fist at 2020! That’s Wednesday’s column, the last of 2020. Coming Friday, New Year’s Day: a sequel of sorts, in which I look ahead to 2021, but with help from you readers.

Candidly, essay columns like today’s are a challenge to write, and they’re not quite my metier. Usually I’m left thinking that I wish I were smarter and more clever, because the results don’t match up with my hopes, or with similar-type essays in other publications. In other words, I have trouble focusing what I want to say, or finding one great point that I can hone in on. But I try to write a column like this now and then regardless, especially during the virus, hoping some element of them will connect.

Thanks for reading me, now and throughout the year, and stay safe.

Is it time for my annual countdown of the Top 10 Weird Local News Stories of the Year, expanded for the first time to the Inland Empire? It is, and it’s Sunday’s column.

For my Christmas Day column, I write one of our Holiday Heroes stories about a local do-gooder. In this case, it’s Linda Trawnik, a force in downtown Upland who is largely responsible for the holiday decorations and music there, and whose food deliveries this year have helped many. (She also willingly suffers the headache of running a community Facebook page.)

Following up on my recent column on Rancho Cucamonga’s first mayor, I return to the topic of how the city with the funny name got its funny name. That is Wednesday’s Christmas Eve Eve column. 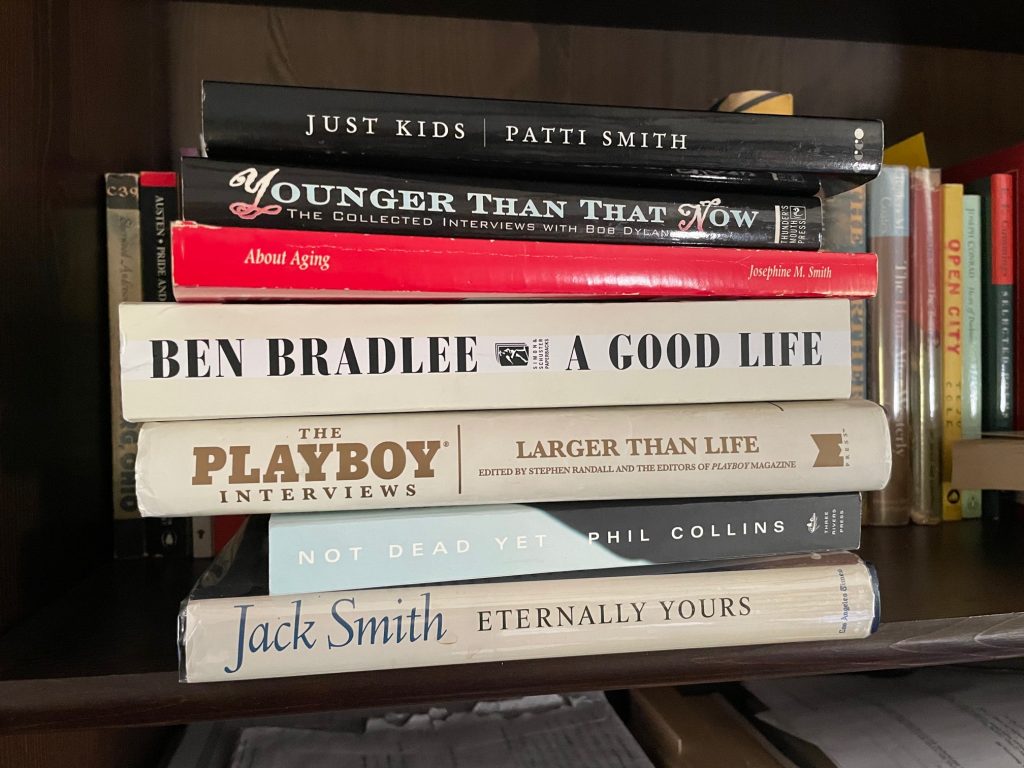 Well, readers, here we are at last, a full three weeks into December. How did we stand the suspense? Blog trouble, as explained in a recent post, is now cleared up, or cleared up for now. I’m looking at what I read in November and some books seem like they were read a long time ago. Somewhat true in some cases, as three or four were largely read in September and October and finished the first few days of November. Heck, I’ve already read four books in December by now.

Anyway, the titles as you can see form a sort of cradle-to-grave pattern, for no reason other than fun — and to motivate myself to squeeze in some unread books from my shelves that I might not have gotten to if I hadn’t needed to finish them for this post.

“Just Kids” (2010): An account of Smith’s bond with Robert Mapplethorpe and being poor, free and bohemian in NYC, where they lived at the Chelsea Hotel with Harry Smith as a neighbor, saw the Velvet Underground at Max’s Kansas City and befriended Sam Shepard, Candy Darling and Jim Carroll. If those names mean nothing to you, maybe skip this. Direct, fond, but sometimes pretentious: If you took a drink every time she cites Genet, Baudelaire, Blake or Rimbaud, you’d end up blotto.

“Younger Than That Now” (2004): These career-ranging Dylan interviews are usually interesting, occasionally illuminating, sometimes confounding, just as often exasperating. The 1965 interview with Laurie Henshaw is hilariously hostile. The 1976 interview with TV Guide is surprisingly warm, as he and Neil Hickey share beers on the beach. This is kind of a junior companion to the Rolling Stone Essential Interviews book, a bit half-assed in selection and typography (no editor/compiler even gets a credit, other than online) but worthwhile for fans.

“About Aging” (1995): In her 80s and 90s, after careers as a social worker and nurse, Smith began writing a column for the local weekly in Claremont. Informal and direct, often about her life, sometimes about local matters or concerns as a senior, they’re uncommonly stylish. Twice she won first-place columnist awards in a state contest. A friend gave me this book; bemused, I didn’t think I would read it, and when years later I started it, a few pages in I didn’t expect to finish. But I kept reading, and I liked it.

“A Good Life” (1995/2017): I listened to the audiobook version while reading footnotes, etc., in my print copy. A well-told memoir with few flourishes, and read by Arthur Morey with a gusto that reflects Bradlee’s directness, confidence and enthusiasm. (It was easy to forget it wasn’t Bradlee’s voice.) At 500 pages, and 20 hours for the audiobook, it’s arguably about 10% too long. Still, his accounts of having polio, serving in WWII, being a foreign correspondent and knowing JFK were unexpected, and then come the expected: the Pentagon Papers, Watergate and Janet Cooke.

“Larger Than Life” (2006): The usual lengthy, probing interviews, this time with icons of the ’60s and ’70s. The John Wayne interview is notorious. Howard Cosell is sharp, Bette Davis is candid, Frank Sinatra is philosophical. Marlon Brando, once he drops his guard, is clear-eyed, smart and funny. Muhammad Ali is full of himself and Bob Dylan gives one of his better interviews. The rest are OK.

“Not Dead Yet” (2016): Heard on audiobook, read by Collins himself, with dips into my print copy. A generally cheerful memoir, well told and witty, from someone about whom I had very little interest. Thankfully he doesn’t take himself too seriously and it’s fun to hear him read. Best parts for this non-fan were about his pre-fame years and about the disaster that was Live Aid. From his 40s onward Collins thoroughly messes up his life and, while he’s unsparing, this happy-go-lucky guy can’t really explain why he became a suicidal philanderer. Perhaps he and his persona were living “Separate Lives.”

“Eternally Yours” (1996): This was the LA Times columnist’s 10th and last collection, compiled by his wife and sons from his last years’ output. Some involve his health (stroke, heart attack, wheelchair), but his sense of humor remained nimble even if he didn’t. There was something brave about his continuing to write even in his physical decline. A few columns from the 1970s and ’80s are sprinkled in, all welcome to this fan. This is the only one of his books I own that isn’t signed, for obvious reasons.

All of November’s books were enjoyable to a similar degree, although some are clearly geared to my tastes. Patti Smith’s book is the standout and won the National Book Award for nonfiction.

How was your November reading — if you even remember? Apologies again about that.  The December Reading Log will be here before you know it (I hope?), followed by the traditional 2020 recap with all my books listed and photographed.

Next month: books on books. 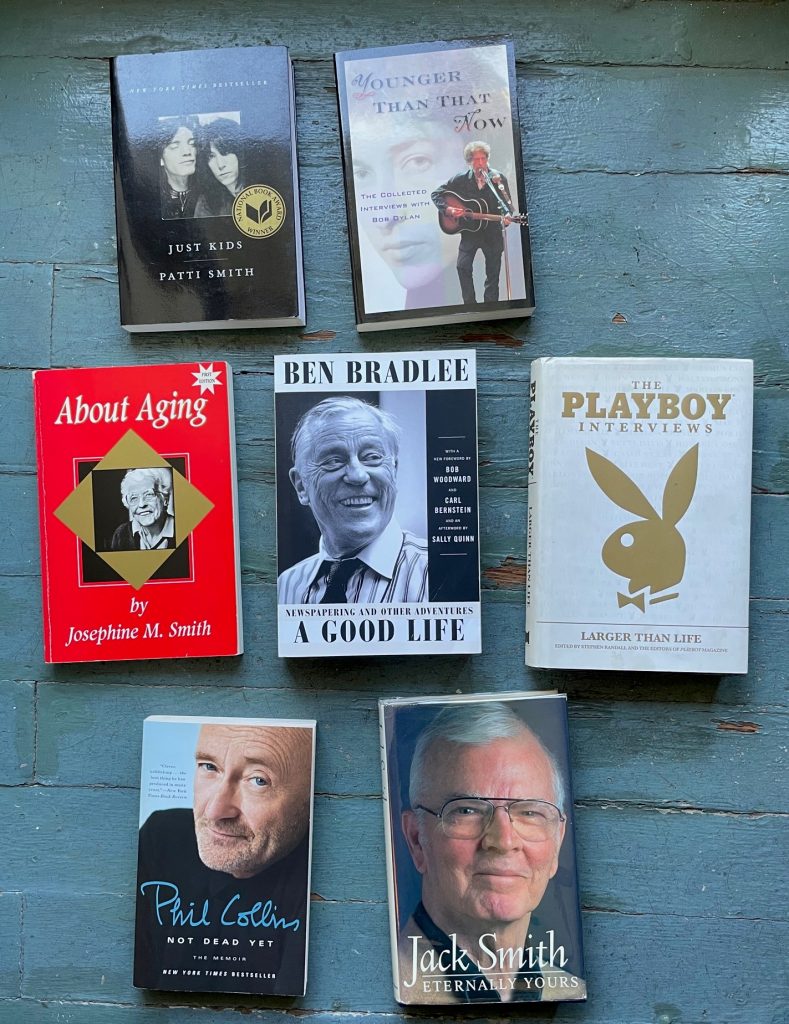 Jimmy Jews, the first Black firefighter in San Bernardino upon his hiring in 1971, died last month at age 79. I write about him in Sunday’s column.

I hadn’t been to a city council meeting since April, and withdrawal was setting in. Chino is still meeting in person, and on Tuesday two new members were being sworn in: the retired police chief and a young man who’s a mere 26, by far the youngest council member I’ve ever dealt with. So I drove to Chino, masked up and did what I do for Friday’s column.

Don Branker, the emcee and producer of the two California Jam rock festivals in Ontario, died earlier this month. (I happened to see his paid obituary in the LA Times, one reason a print subscription comes in handy.) I also pay tribute to Bob Smith, a Pomona artist and history buff and friend of yours truly, and present two other short items, all in Wednesday’s column.

We’ll see how long this thing holds together — suddenly I’m reminded of the opening sequence to “The Six Million Dollar Man”: “She’s breaking up, she’s breaking up!” KA-BLOOIE — but our IT folks managed to disable the platform update that rendered me unable to post any text, only headlines.

I’ve caught up by posting column links to everything I’d missed going back to Dec. 1 and will get a Reading Log up this weekend, if not before.

The Inland Empire used to have a lot of drive-in theaters, most of which faded out in the 1970s and ’80s, although a few are hanging in there. I write about some of those fondly remembered theaters in my Sunday column.