The addition of a gleaming new Main Library to downtown Riverside also serves as counterpoint to its humble neighbor: Tio’s Tacos, whose expansive grounds contain a sculpture garden of folk art, all made by restaurant owner Martin Sanchez. As one reader says: “It’s the Watts Towers of Riverside.” Sanchez is the subject of my Sunday column.

I walked LA’s Music Box Steps recently to complete the full “Secret Stairs” complement of 42 urban hikes, the subject of my Aug. 18 column. But I didn’t have room to say too much about the stairs. And since I went back a few days later to do the two-mile loop all over again, this time with the book rather than with the author, to look for things I’d missed, I decided to write about the experience and the movie that gave the steps their name. Thus was my Friday column born.

Two dates for self-guided tours of downtown Riverside cultural, civic and historic sites are set: Aug. 28 (that’s Saturday) and Sept. 25. And they’re free. I provide the details, as is my wont, as well as the basics about a silent film classic that screens Saturday night in Pomona with live organ accompaniment. That’s all in my Wednesday column. 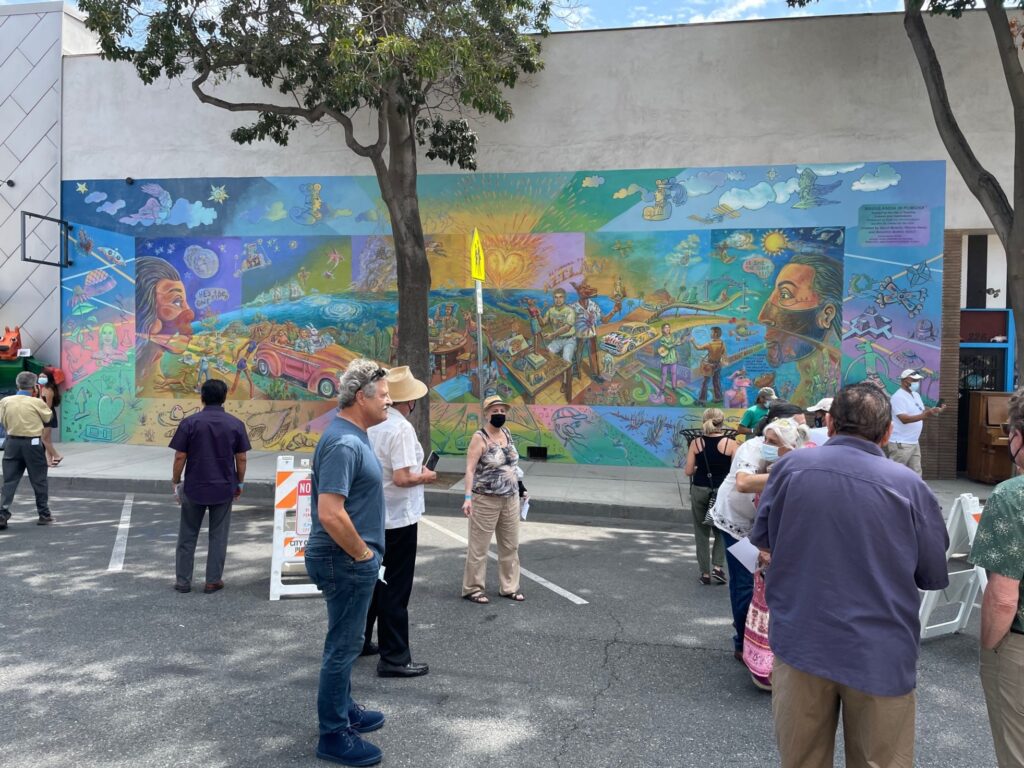 A mural for Gilbert “Magu” Lujan was dedicated Aug. 14, with comments from the artists, Lujan’s family and others during a ceremony near the sprawling piece in the 200 block of South Main Street in downtown Pomona. I wrote a column in June about the piece in progress and attended the dedication.

Lujan, who died in 2011, lived a few blocks away from the mural site from 1999 to 2007 and was an active part of the Arts Colony. Below, muralists Wayne Healy, left, and David Botello said during the dedication that they felt their old friend’s spirit present as they worked. One of Lujan’s sons said the mural will help keep his memory alive.

It’s worth checking out. With the decorated frame, the mural is 52 feet by 17 feet, so there’s a lot to absorb. 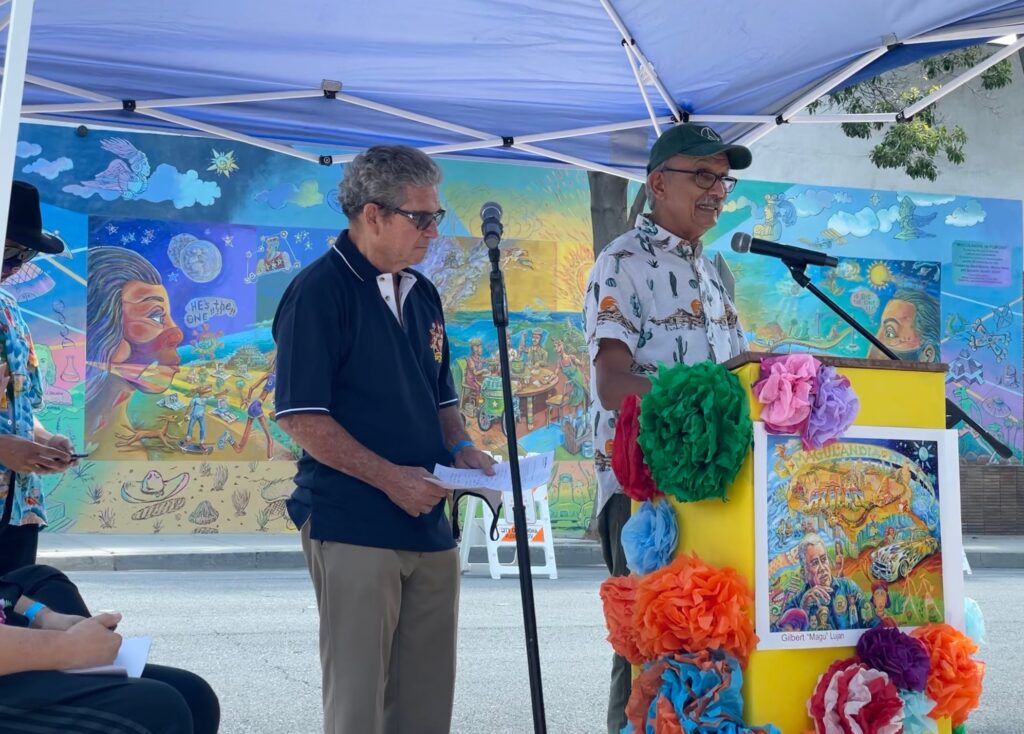 Perhaps you’ve read about the hotel planned for a long-vacant lot in downtown Riverside, and how the church across the street objects. I attended a City Council hearing on the subject that got cut short and postponed to October. But more information came to light afterward. Also, I checked out the site in person. That’s the subject of my Sunday column.

“It’s devastating. It’s heartbreaking. It’s unbelievable,” says Nangy Ghafarshad, owner of Walter’s Restaurant in Claremont and an Afghanistan native, about the collapse of the government. He reflects on the situation, U.S. involvement and his personal history in the country in my Friday column.

After years of occasional forays from Secret Stairs, the 42-walk guidebook, I picked up my pace (literally!) during the pandemic to finish them all. Author Charles Fleming, LA’s stair master, joined me to walk the last one: the Music Box Steps. I write about our walk, the stairs and my quest to complete them in Wednesday’s column. 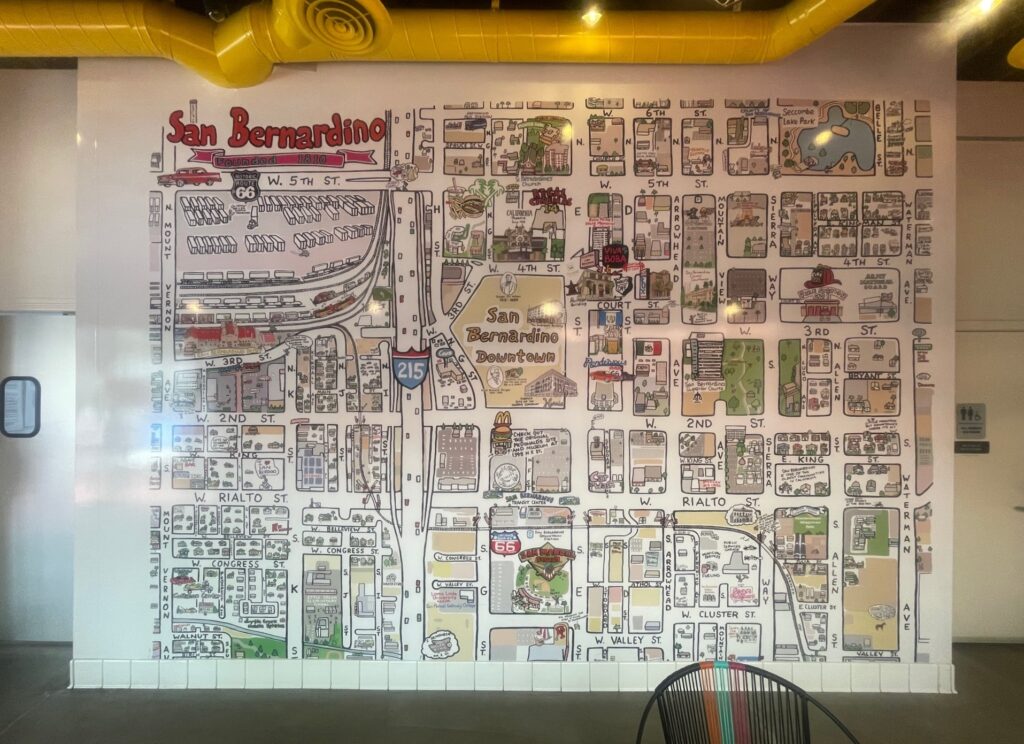 Meeting an interview subject in downtown San Bernardino at Viva La Boba, a coffee and tea shop, I was struck, and who wouldn’t be, by the mural inside. It depicts the downtown street grid, businesses and landmarks noted. I stepped outside and snapped a photo through the window to get the whole thing into the frame. Click on the photo for a larger image.

Co-owner Tansu Phillip told me the mural, like the shop, is two years old. I don’t know if it’s as useful as Google Maps, but close. And it’s got hometown pride behind it.

As I did after getting an earful from readers about my Temecula coverage, I excerpt some of the emails and Facebook comments about my Corona-Norco Unified coverage in Sunday’s call-and-response column. Can I get an amen?

A new anthology collects poems, fiction, essays, photos and drawings about the city into “San Bernardino, Singing.” I read it and took notes, then interviewed editor Nikia Chaney about it, and now I’m writing about it for my Friday column.