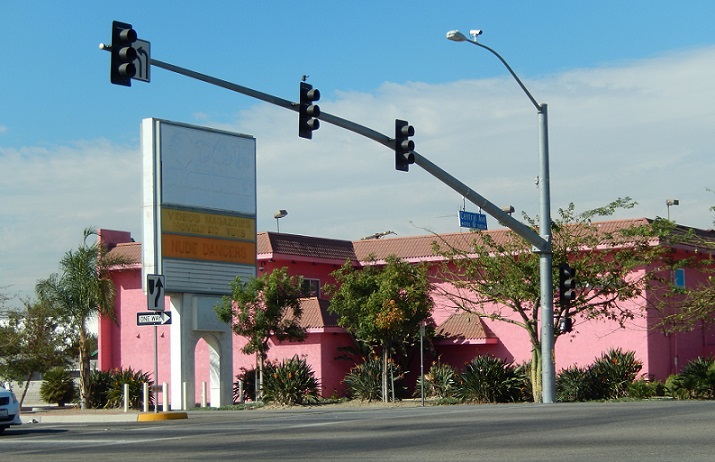 The Deja Vu strip club outside Montclair is no more, with a bar slated to occupy the building under the same owners, Tollis Inc. It’s the subject of my Sunday column. To eliminate any hanky-panky, San Bernardino County planners and lawyers set down a list of possible new names for the business. I couldn’t resist sharing them.

From the conditions of approval:

“Tollis shall select the name of the business operated in the Building from the following names, which have been mutually agreed to by the Parties:

h. The Iron Rail, or

That’s, um, quite the gamut. So the new business will either have an 1890s theme, or a 1920s theme, or a tropical theme, or maybe a Hooters knockoff theme, or…

in Friday’s column, a reader shares his whimsical attempt to throw his weight around when he was principal for a day. Also: six (count ’em, six) items from Ontario and three book items. 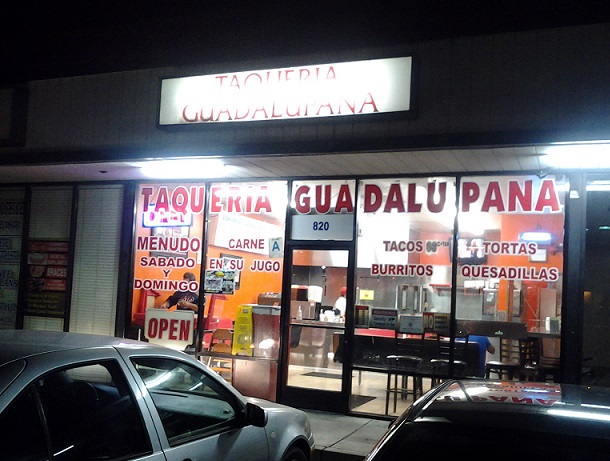 I was on foot at Towne and Second one recent evening looking for a place to eat. This proved more difficult than expected, as Los Jarritos was closed and Nancy’s Tortilleria, also on that corner, was closing. I’d left my car in the garage at Western U figuring I could find grub nearby. But I pressed on on foot, knowing Mission Boulevard three blocks south would have a few options.

And it did. I opted for a place on the southeast corner: Taqueria Guadalupana. The broad windows and brightly lighted interior were friendly and welcoming. It’s a small place with a limited menu of tacos, burritos and tortas with seven meat choices: cabeza, al pastor, asada, lengua, buche, chorizo and pollo. I suppose I should try tongue, brains or cheek someday, but not yet: I went for al pastor (marinated pork) in burrito form ($5.50). With a medium jamaica drink ($1.25), dinner was $7.36 with tax.

Decor is limited and so is the seating, although it feels expansive compared to Tijuana’s Tacos. I sat at a communal booth, in view of the open kitchen, a telenovela playing on the TV and a Virgin of Guadalupe mural on one wall. The burrito was very good, warming the stomach and the soul.

The menu is slightly broader than I indicated: They have menudo on weekends and something called carne en su jugo, which turns out to be a beef and tomato stew. Might be good on a cold night.

On my way out, I noticed another Mexican spot on the northeast corner. The sign was dim but the name was Taqueria la Oaxaquena. A sign out front touted 60-cent tacos on Tuesdays, which this day was. Oh well. I can always go back. For tonight, I was glad to have found Taqueria Guadalupana. 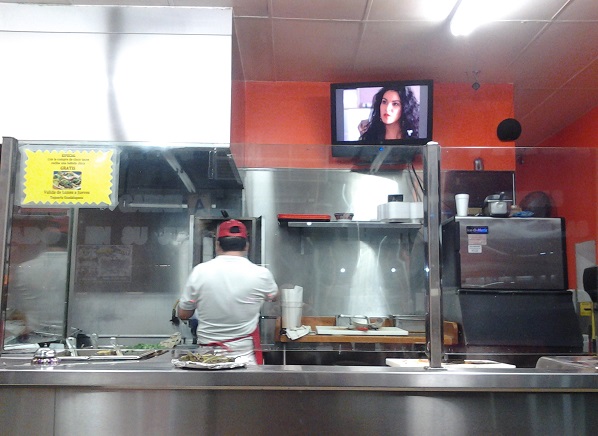 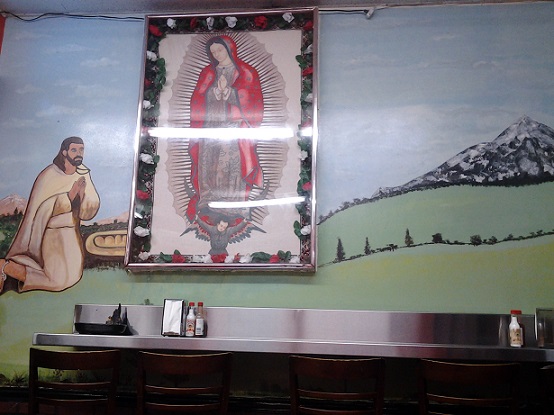 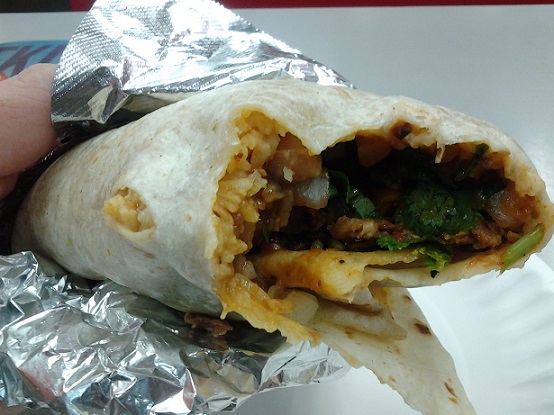 Wednesday’s column is about Measure PPL and doubles as an update on the Pomona Public Library, which was threatened two years ago with closure. The library is still open, but with limited hours and services. The ballot measure would change that. Two-thirds approval is not easy to get, however. 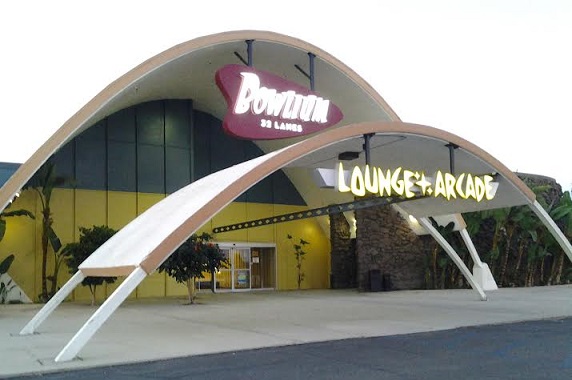 I intended to write a series of posts on bowling alleys, set up a format to do so, produced one on San Bernardino’s Arrowhead Lanes in November 2011, and then never wrote another one. Oops. Well, here’s the second in the series, and I promise not to wait three years for the next one.

Possibly my favorite local bowling alley, Bowlium Lanes offers a burst of style on a dispirited stretch of Holt, even if the enormous pole sign fell victim to sign codes a few years back. Behind the flagstones, arches and dingbats on the exterior you’ll find more retro style inside: a cozy enclosed diner and vintage signs for restrooms and cocktails.

The interior is well-maintained too. The lanes are kept well-oiled (possibly too well-oiled) and they have plenty of balls to choose from. The scoring machines are tricky to program, with directional arrows in multiple colors for navigation, and I kind of hate them. The graphics on the overhead screens are entertaining. Besides the bowling, there’s a pro shop, a bar and a game room.

Ambience: The Jetsons meet the Flintstones 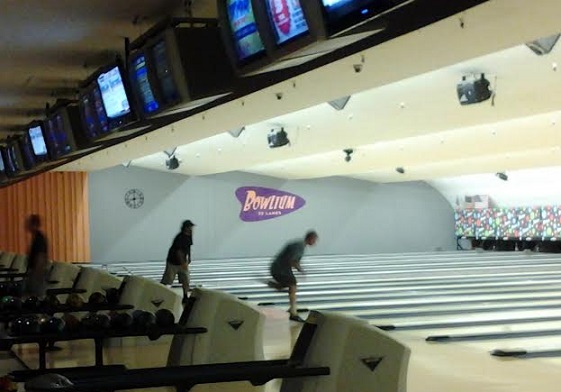 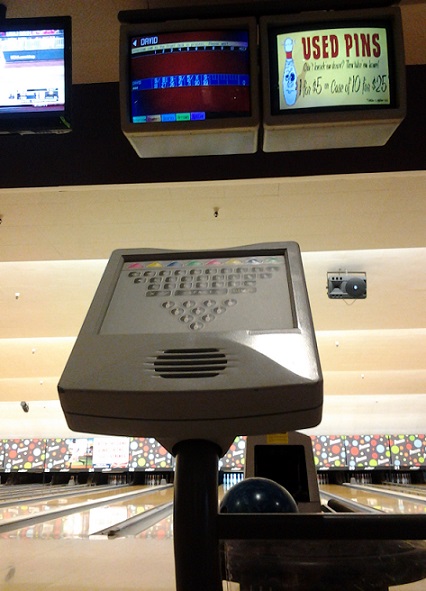 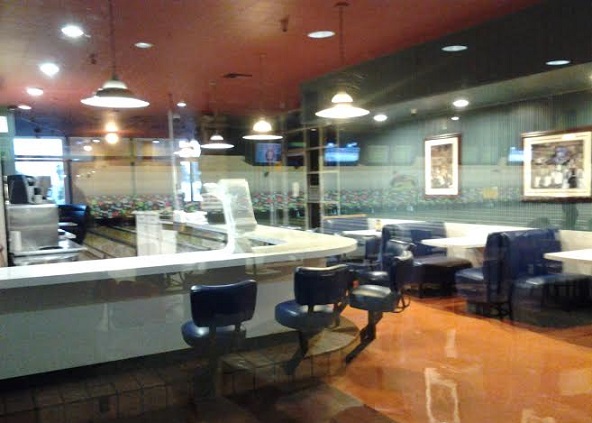 Sunday’s column is about last week’s Ontario City Council meeting, which had a lot of public comment, some of it of a serious nature. And of course, Paul Avila had to mess things up.

Friday’s column is about the screening in Upland of “White Zombie,” which served as a tribute to actress Madge Bellamy, who spent her later years in Ontario and died in Upland. Also, two unusual 909 sightings in the national media and a plug for Claremont’s Village Venture, which takes place Saturday. I’ll be selling books from 11 a.m. to noon in the parking lot of Rhino Records. 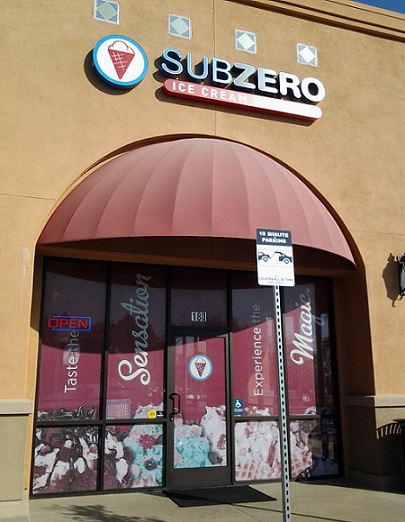 So I ate lunch at Panera at Haven and Foothill one recent afternoon and then drove north in search of Sub Zero, which is past where you’d think it would be, above the Town Center shops and behind the Mobil station in a small building with no other tenants.

Inside it’s a clean, modern space. I was the only customer at the moment — a few more came before I left — and an employee explained the process. They make their own ice cream in front of you, mixing the flavors in a bowl and then quick-freezing it with nitrogen from a giant tank. Sub Zero is coming up on its second anniversary in Rancho. The Utah-based chain is in seven states. Its founder has a chemistry background.

The menu has 55 flavors, plus mix-ins, or you can simplify things by ordering one of the combinations. Overwhelmed, I did so, getting the Bernoulli Brulee, with caramel, dulce de leche, vanilla and cinnamon flavor, Heath and Twix added. A small was $5.80 and came in a waffle bowl inside a cup.

She mixed the cream and ingredients in a bowl, telling me the ice cream is creamier in their process because it doesn’t have air bubbles. The nitrogen blast had a dry ice effect as vapor swirled around the counter. Perfect for that Halloween spirit.

I shot a video. (It came out sideways. Forgive me. But you’ll get the idea.)

Three scoops of ice cream was a lot for a small size. It tasted pretty good. Actually, I’m very happy with simply having someone hand-scoop my ice cream, and U look askance at Cold Stone and the whole mix-in trend, so I’m not sure I’ll ever go out of my way again to come here. (Although my receipt offers $1 off my next visit.) But the novelty was fun.

Now that I seem to be taking Rancho’s nitrogen ice cream parlors in chronological order, I’ll get to N7 sometime. 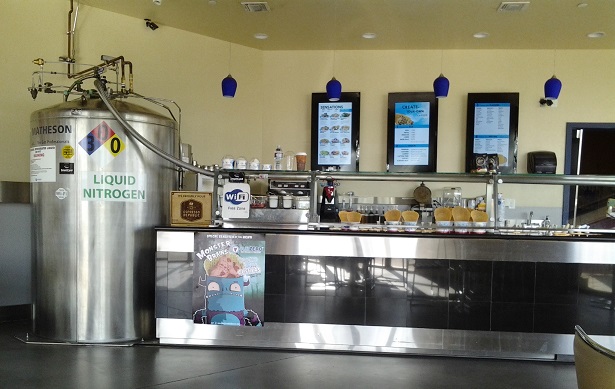 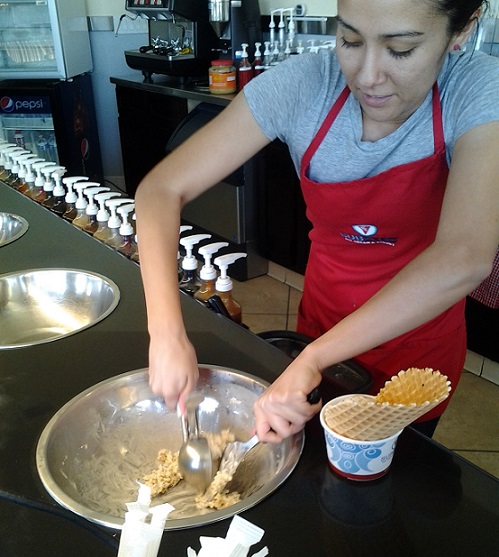 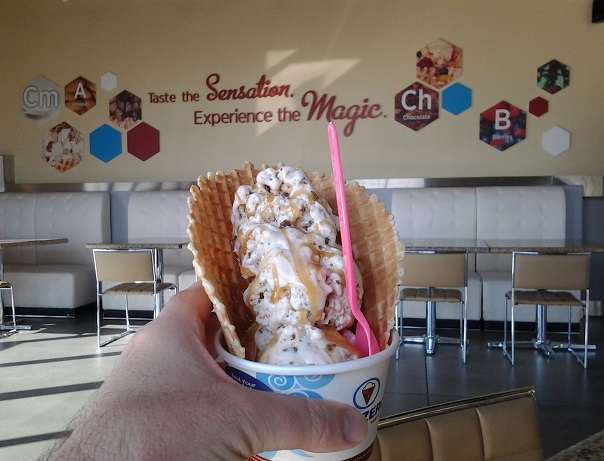 A long-lived dive bar in an untrendy portion of Rancho Cucamonga is expected to close next month. Wednesday’s column pays tribute to Gilberto’s Lounge and owner Ken Gilbert.