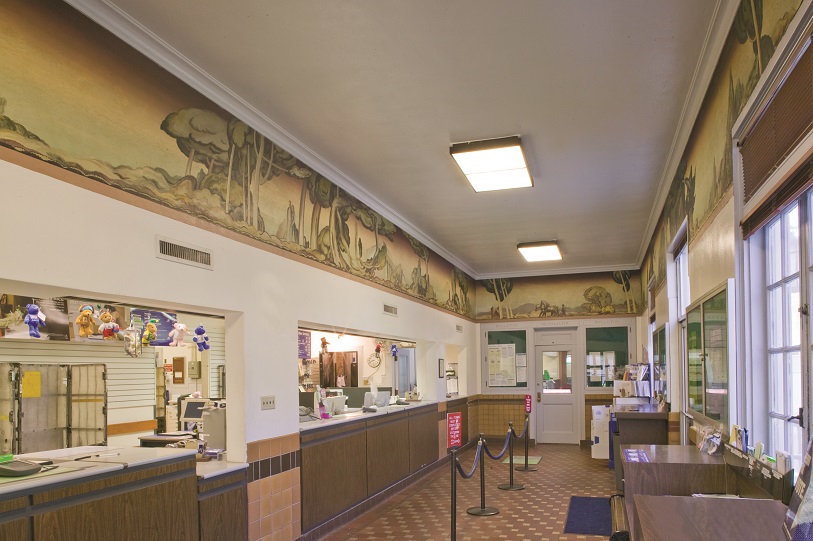 Zornes’ most-viewed work is the mural inside the Claremont Post Office, which wraps around all four interior walls. (Photo by Gene Sasse)

The 1930s mural in the Claremont Post Office that wraps around all four walls near the ceiling is sometimes said to depict the view from the four points of the compass. When I wrote about Milford Zornes in my column in January, I said that was the lore, but that his son-in-law hadn’t heard the story.

It’s probably true: In my files I later found a 2007 Claremont Courier story about a talk the 99-year-old artist gave to the local Democratic Club concerning the mural.

“His design proposal was accepted without change,” reporter Bob May wrote, “and depicted the views one would see if they were on the post office property, looking in the four directions, north toward the mountains, west toward the citrus industry, south toward horse pastures and farms, and east toward the colleges and a Mexican settlement.”

(While the design was accepted without change, that’s only because Zornes fought for it and Millard Sheets, a WPA official, intervened on his behalf; postal officials didn’t like the design and had wanted the mural confined to one wall.)

Subsequently I went into the Post Office, admired the mural anew and took photos. The mural is overhead, and much longer than single photos can convey, so consider my photos merely a general guide. 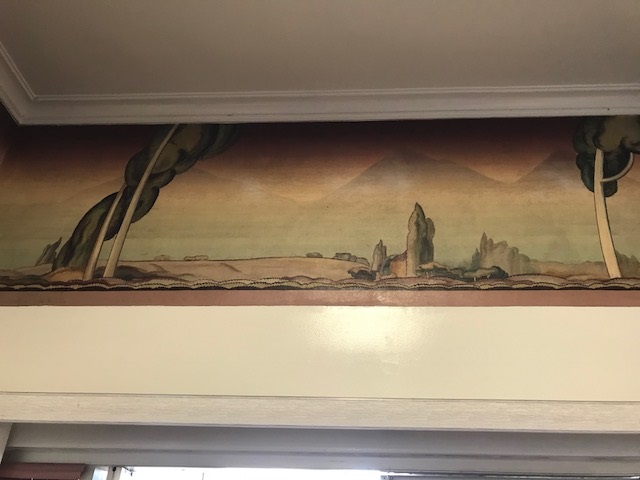 This is the view looking north toward the mountains. 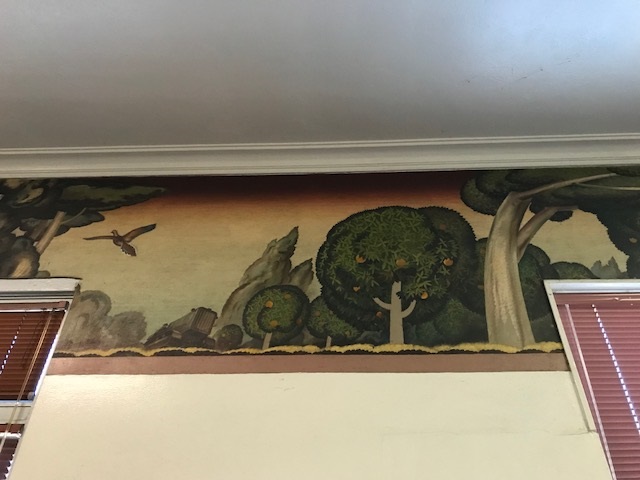 This is the view looking west toward the former citrus area. 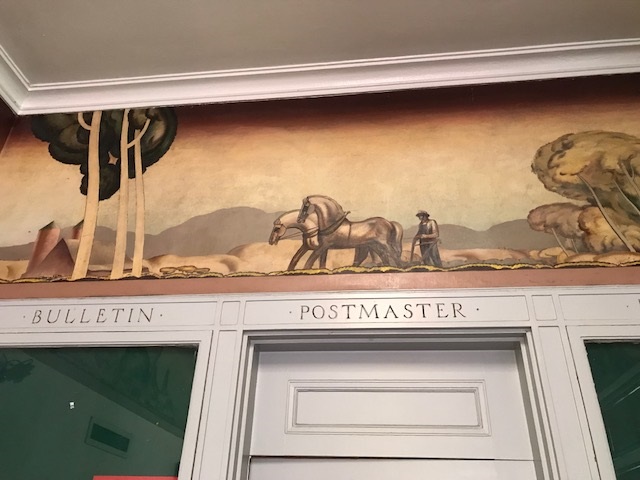 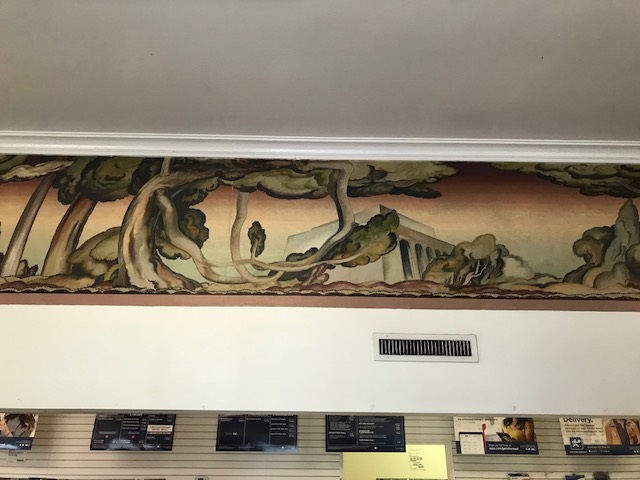 And here is the view looking east toward the colleges.

“For all the criticism it took, I think that time has settled the fact that Milford was right about putting it on four walls and not one,” says son-in-law Hal Baker, who wrote the Zornes biography that was the subject of my January column.

Have you visited the Claremont Post Office? It’s at 140 N. Harvard Ave., and well worth a look. You can get a dose of culture while also mailing a letter. 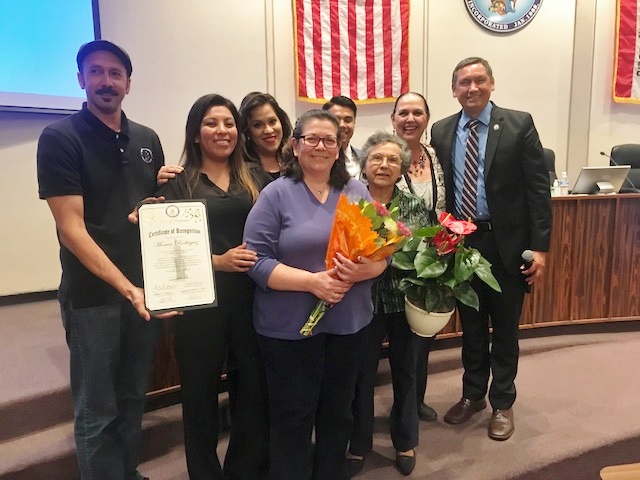 Sunday’s column pays tribute to my former colleague Monica Rodriguez, who got a warm sendoff from the Pomona City Council last Monday. I went there to be supportive and thought I might write an item on it, but some of the comments were really touching, and the whole thing provided an opportunity to reflect on newspapers and on Pomona.

Most years, there’s a Claremont Folk Festival, but not every year. This year there will be one. I write about it for Friday’s column, followed by some cultural notes, a plug for this blog and a vignette. 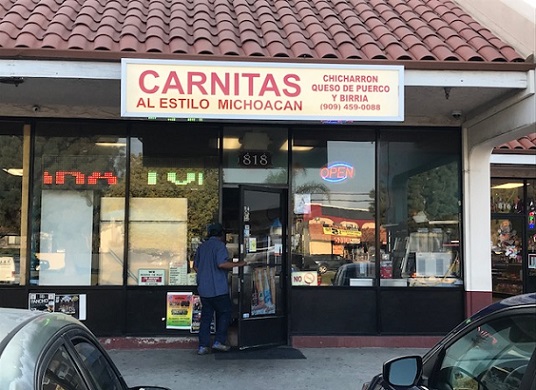 Ontario doesn’t show up as often in these Restaurant of the Week posts as some cities. So when a friend suggested meeting at a carnitas specialist in south Ontario, I was all for it. Carnitas al Estilo Michoacan is in the shopping plaza on the southwest corner of Mountain and Mission. 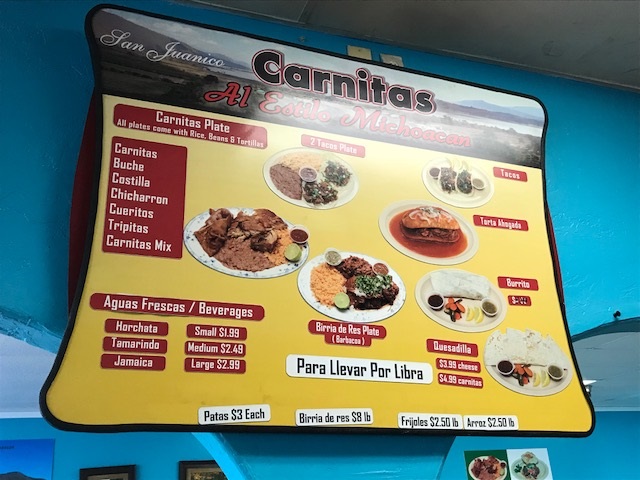 You order at the counter, by a steam table of meats. Here’s the menu; click for a larger view. As befits the restaurant’s name, it’s pork-intensive: pork, stomach, skin and the carnitas mix, pork with brains. 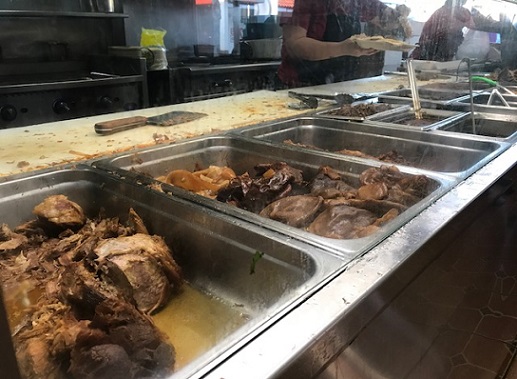 But they also have beef. My friend got the two-taco combo: one pork, one birria, which is stewed beef, with rice and beans (about $9, below); I got the same, except both birria. This wasn’t on purpose. I can get a little tongue-tied at unfamiliar and ethnic restaurants. 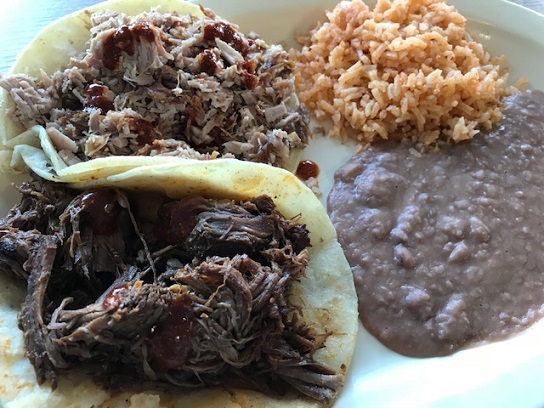 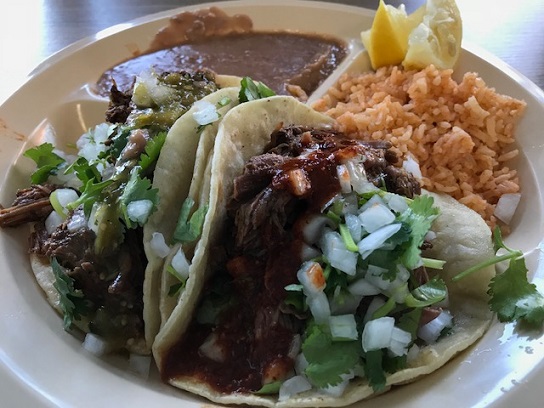 Their tacos are large and meaty; I ate about half the beef with a fork before picking up the remainder. We both thought the tacos were quite good. She bought a bag of housemade pork rinds for her parents.

A couple of weeks later, I returned for two carnitas tacos, again as a plate. Couldn’t very well write about Carnitas al Estilo Michoacan without trying the carnitas. It was tender and flavorful. 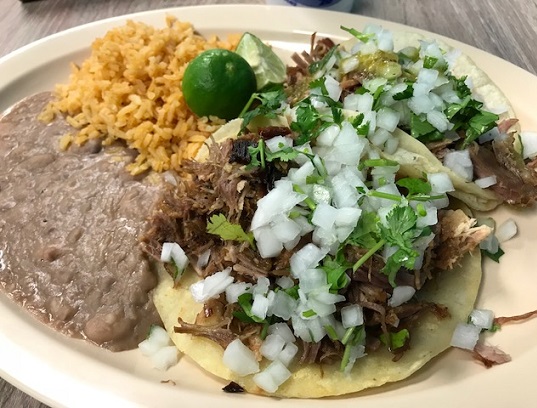 Next door there’s a La Michoacana Ice Cream shop in case you’d like to continue the theme and maybe cool off the spicy salsa. 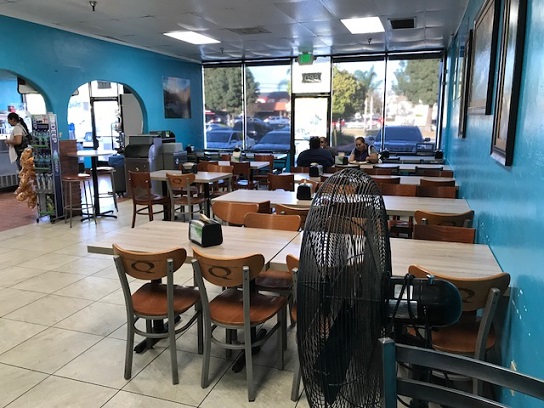 A Claremont-based theatrical group for children, Alliance for the Performing Arts, must vacate its 6,000-square-foot storage space in Pomona by May 1 — but has nowhere to take its vast numbers of costumes, props and set pieces. I don’t know if a column will help, but it can’t hurt. I write about it for Wednesday’s column. 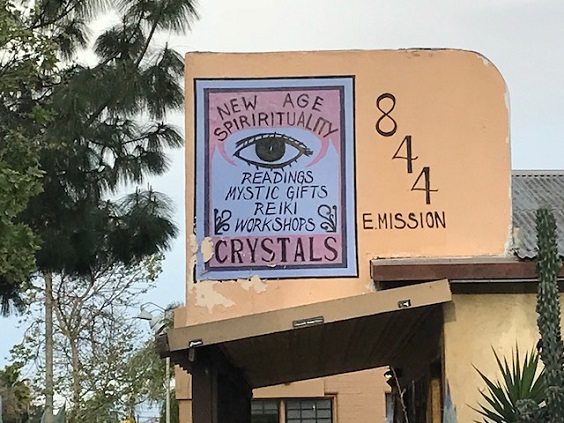 Parked for tacos in Pomona, my eye was caught by the sign next door. The sign painter got lost while painting the word “spirituality.” Or maybe the Pomona version is better than plain, old, garden-variety spirituality. 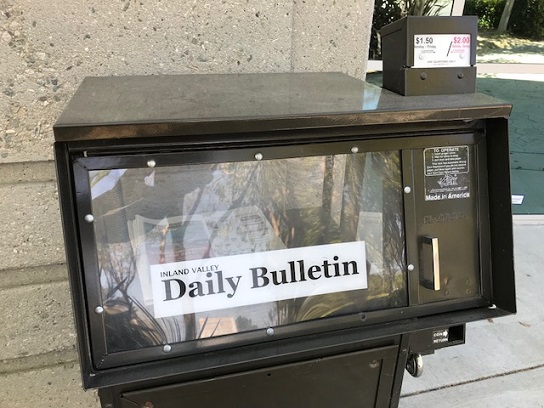 Sunday marks 31 years for yours truly in newspapers. While not a round number, the anniversary provided an excuse to write about the uncertainty of my field of work, which I do in Sunday’s column. Above, a newsrack outside our office.

Your uncoordinated columnist never learned to ride a bike. This week, with CicLAvia coming, I got a lesson. Spoiler alert: It didn’t go well. I write about the experience in Friday’s slightly (or very?) embarrassing column. But those are the best kind, right? Be sure to watch the video in the same link by my colleague Stan Lim. 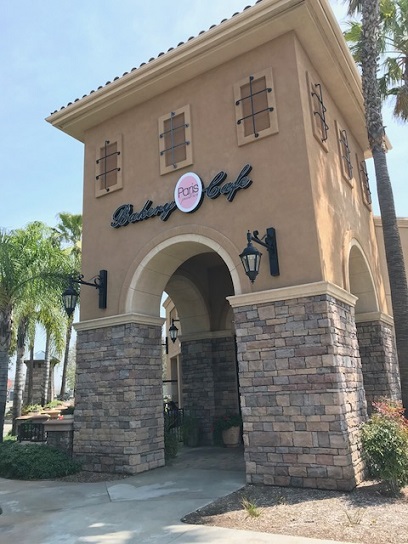 I still think of this corner spot in the Chaffey Town Square center as Pei Wei, although it’s been a restaurant or two since the Chinese fusion place left. It’s been Paris Pastries for a couple of years now. I made it in earlier this month for a weekday lunch with a Francophile phriend, er, friend.

My visit was prompted by reader Charlene Comeaux, a regular there, who emailed to tell me the owners moved to Rancho Cucamonga from southern France, are fluent in French and thus serve authentic French cuisine and baked items. 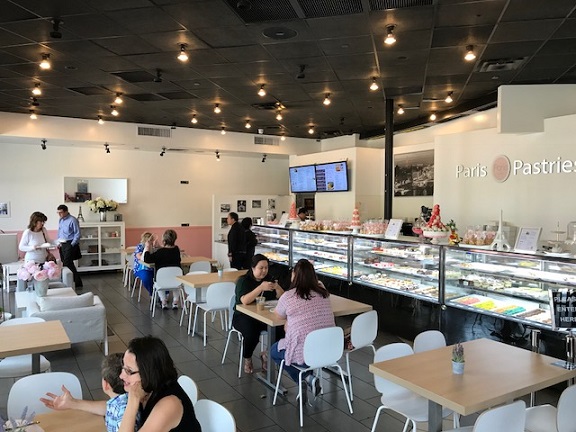 Several of the patio tables were taken, a nice sight, and inside the restaurant was being enjoyed by several more, so maybe Paris Pastries is catching on. Besides the tables and chairs, there’s a sofa, which was occupied and gave a homey touch. The dining room was decorated in pastels, and a long bakery case offered enticements: macaroons, cakes and more. You order at the end. 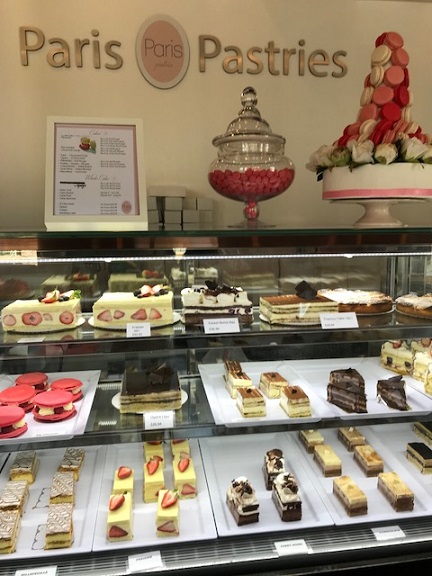 The menu is short, with a couple of salads, a few sandwiches, quiches, plates and crepes, plus coffee drinks including espresso. 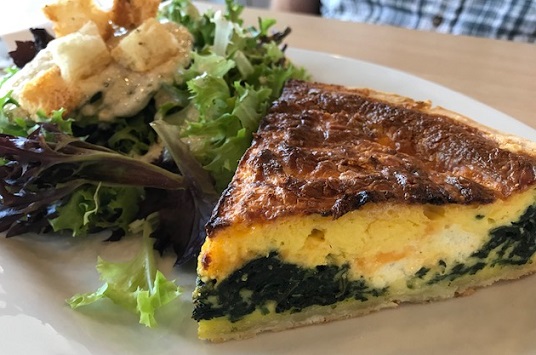 My friend had been here a couple of times before for croissants on weekends but had not had a full meal. He ordered the quiche combo ($11): a spinach and goat cheese quiche, a salad and a drip coffee. He pronounced himself satisfied, if not quite transported to the French countryside. 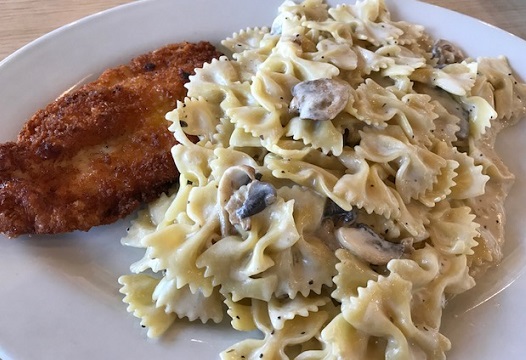 I got the crispy chicken pasta ($10.49), with fried chicken breast, pasta, cream sauce and mushrooms. This was plenty filling, and the bread pudding I ordered ($4) about finished me off. But I finished it off first. 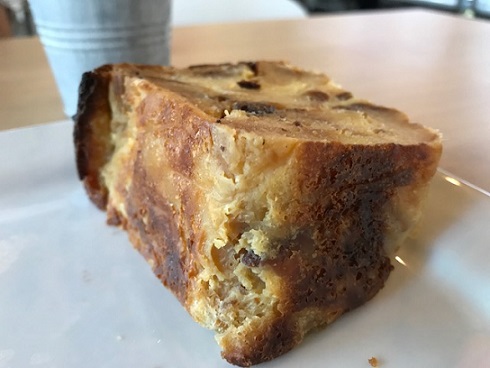 It’s a cute place and one of the very few spots locally with French cuisine. Mention should also be made of the little corner designed for children, with a small table and chairs, books and play objects. I found it adorable — which I’m mentally saying in the French way. 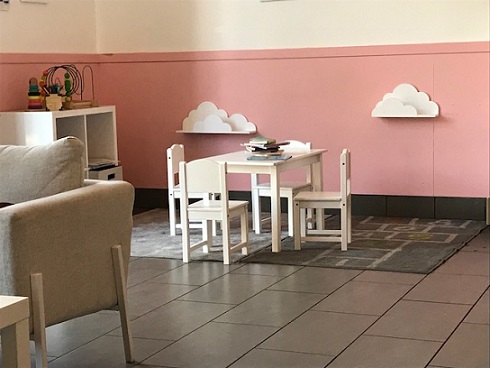 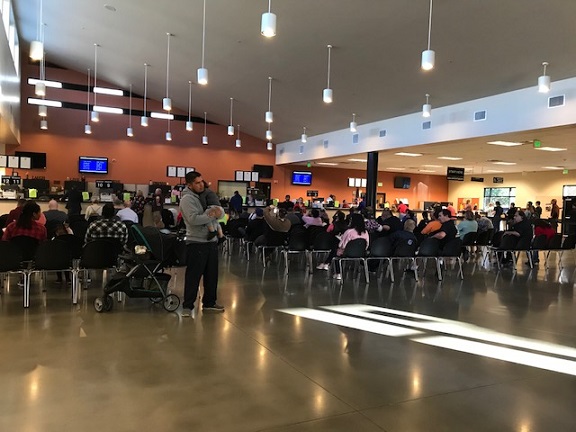 I go to the Rancho Cucamonga DMV to get the Real ID driver’s license. Don’t know what it is? Wednesday’s column explains.