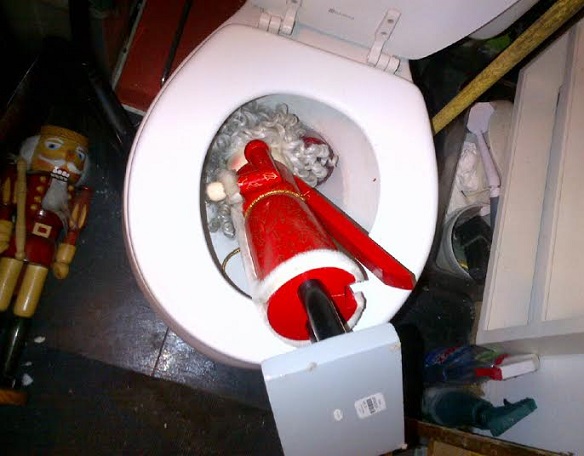 A Santa Claus in Pomona met an ignominious end when last Friday’s earthquake sent him tumbling from a storage room shelf into the facilities at Magic Door Books. Given the outcome, can we compare the shaking to the poetic “bowlful of jelly”? Owner Dwain Kaiser sent me the photo with a mournful note: “At least Santa Claus drowned quickly.”

Vacation went well, thanks, and I hope to write about that soon (although two of my three columns this week are already committed to time-sensitive topics, so this might be tricky). In short, though, good food, some culture, a lot of walking, a lot of transit, a visit to the LBJ Presidential Library and a fascinating boat tour to watch the bats leave the Congress Avenue bridge at dusk.

What did I miss around here?

Two Hitchcock-related columns in one week? Only the top item this time, not a whole column like Wednesday. I’m programming the movies at the Ontario library in April and my Sunday column gives the titles and dates.

After that come a couple of literary items and three Pomona items (two of which have sat around for a few weeks, waiting for their moment in the spotlight). And I end by mentioning that I’ve been on vacation. But you blog readers knew that all week, right?

I turned 50 recently, two weeks ago today in fact, and I reflect on that in Friday’s column. Well, mostly I just joke about it.

I started writing this one just after my birthday but dropped it to write about the Sunkist sign instead, then returned to it before vacation to retool it over the course of a couple of hours, which largely involved deleting some reader comments and putting more of myself in it. The result is better, I think, but there wasn’t much time to think about it. I’ll be curious to read it myself to see how it turned out — but not just now.

After watching every single Hitchcock movie (other than a couple of rarities), I’ve chosen my Top 13, plus 10 runners-up, and devoted Wednesday’s column to my picks.

I’m in Austin, Texas, this week for sightseeing and relaxation. Also, ribs. It’ll be my first visit and I’m looking forward to it. Columns will continue to appear, as if by magic, on Wednesday, Friday and Sunday, and I’ll post them here. Other than that, this blog is going dark for the week. Feel free to explore past entries, and I’ll check in as time permits. Regular posting will return Monday, March 31.

I attended Tuesday’s Ontario City Council meeting and got a column out of it. Not only did the council follow through on boosting its pay, but a new member was named to the Parks and Recreation Commission, although you might say he’s also an old member. Details are in Sunday’s column.

Friday’s items column starts with an update on construction of a park in the heart of downtown Ontario, as well as of an office building a block away. Following that are five Culture Corner items and as news about a picturesquely named rock in the San Bernardino National Forest. 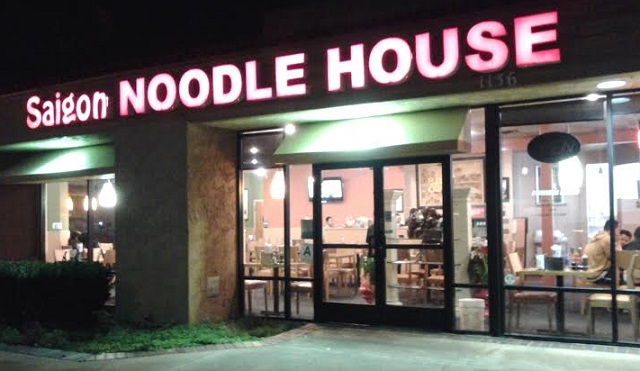 This is my first Diamond Bar Restaurant of the Week. I found this Vietnamese spot on Yelp, where it has strong ratings and lots of ’em. Two friends and I ventured down for dinner on Oscar night. It’s not far from the 57.

The place was full at 7:30, with a short wait, showing its popularity. We shared an order of spring rolls. One had salmon fried rice (bottom), the other had vegetarian pho and I had beef pho (below). Sorry, the menu isn’t online and I didn’t note any of the prices, but our total was about $25, pretty cheap for dinner for three.

My friends liked the salmon fried rice, which as you can see had a hunk of salmon on it, and they thought the rice was way better than average. And we liked our pho, which is a noodle soup, if you’re unfamiliar. “It has a lot of MSG in it, which is why it’s so good,” one said.

Service was hurried but unexpectedly friendly. When I ordered the regular pho rather than large, he asked about that, and at first I thought he hadn’t heard me. But no, he was joking about why I was ordering the smaller size. Heh. It was a good choice, being just the right amount for how hungry I was, but I appreciated the playfulness. 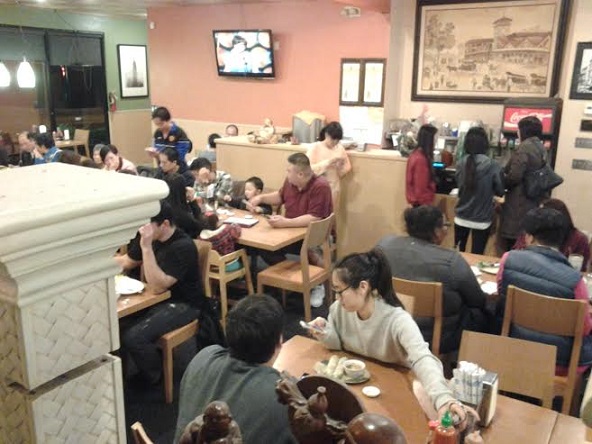 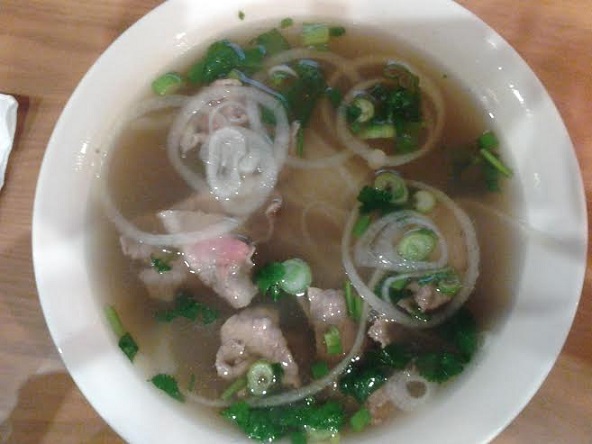 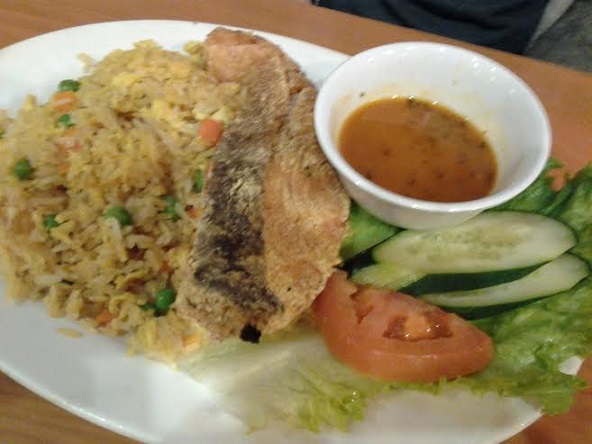 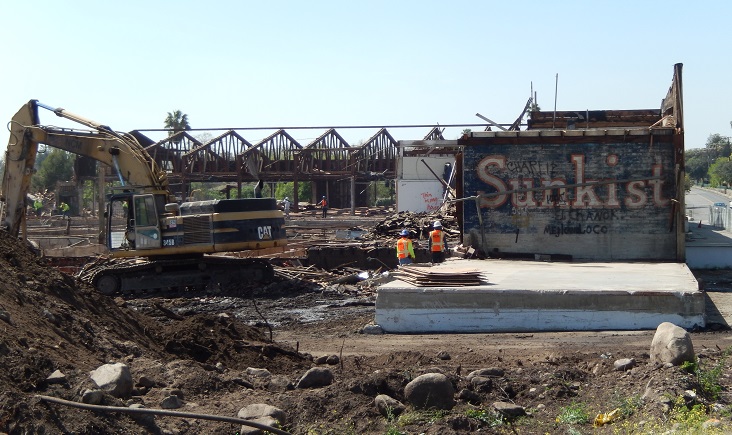 An old citrus packing house on East 19th Street in Upland just west of Campus Avenue is coming down, as detailed in my Wednesday column. Demolition is of added interest due to a faded Sunkist logo being exposed when one wall came down.

I took photos from the sidewalk and from the construction driveway, from which the above was shot, facing west. Venturing into the construction zone seemed like a poor idea and there was no one nearby to ask permission from.

For a different angle and a wider view, I drove east to the Highland Garden Center, where an employee kindly let me shoot from the fence at the west end of their property. The angle didn’t reveal anything very interesting, alas.

Next I stopped at nearby Fire Station 164 on Campus, hoping its height would provide a better overall view of the site.

The fire crew generously said I could shoot from their roof. Getting to the roof involved climbing a ladder, which I’m afraid was out of the question. After about four rungs on a ladder, my legs stop working. I handed my camera to firefighter Dennis Weaver to take photos himself on my behalf. The one below is by Weaver. It wasn’t quite the elevated view of the property for which I’d hoped — the roof isn’t that high — but it wasn’t bad.

“We could put you on the 110-foot aerial for an even higher view,” Weaver offered. “You’d be strapped in so there’s no danger. The ladder does sway a little in the wind.”

He added: “We’d have to take pictures of you, of course.”

Readers would insist on it, as would I. But I declined politely. I don’t even go on rides at the Fair, much less at fire stations.

* Update: This website, found by reader Don J., chronicles some of Upland’s packing houses. The text is disorganized and there’s no info about the 19th Street one that I could see (except for a 1980 photo that I believe is of the same building, the Upland Citrus Assn.), but the photos are neat. 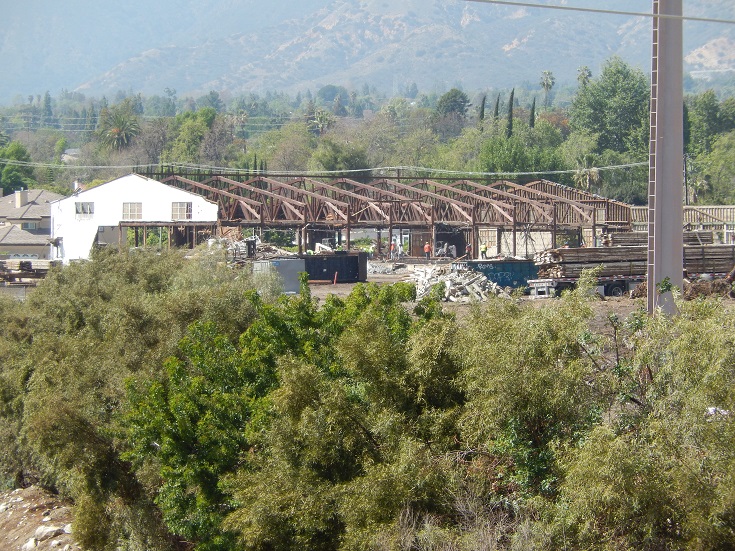