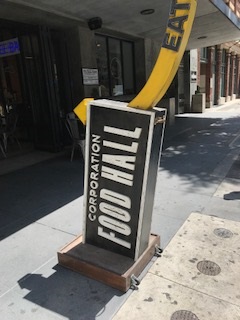 On Sunday I ventured to LA via train to check out the Corporation Food Hall downtown at 724 S. Spring St. It opened last fall. Ordering lunch at South City Fried Chicken, I came across a situation that was brand new to me. As I tried to hand over a 20 and two 1s, the employee said apologetically, “We don’t take cash. We only take cards, sorry.”

They use the Square payment system. (I use the tiny version that connects to a phone to process card payments for my books.) I handed over my credit card and left with just as much cash in my pocket as when I arrived. 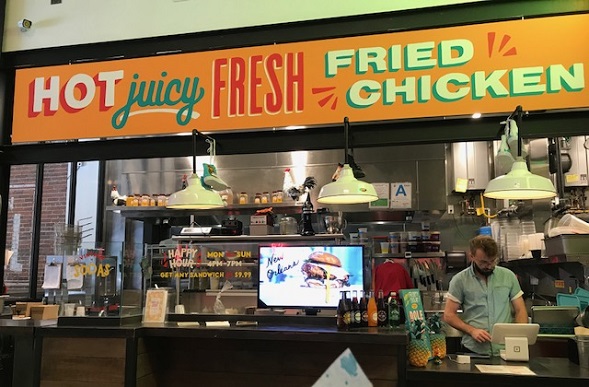 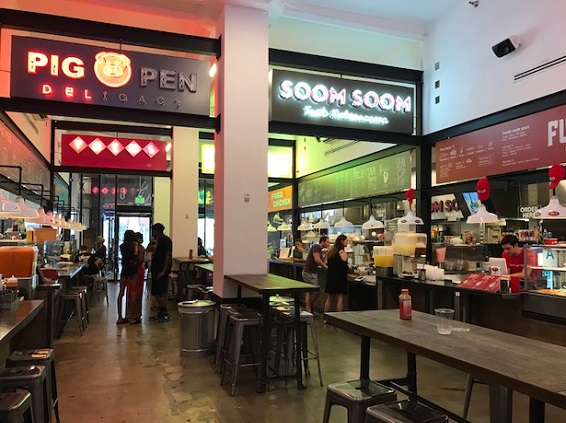 Unless I’m forgetting some previous incident, this seems to be the first time my cash was no good somewhere. I don’t know if any of the other half-dozen food vendors at the food hall take greenbacks, as my sandwich and fries were all I needed (for the rest of the day, in fact).

It makes a certain kind of sense: Most of their hip clientele probably routinely pays for everything with plastic, and then there’s no fear of robbery, or the need to run to the bank for a deposit or change. There may be those who don’t have a debit or credit card, for one reason or another, and yet might like a sandwich or cold drink, though.

I still tend to pay with cash for modest purchases. Have you met up with a card-only situation anywhere? How do you feel about it? 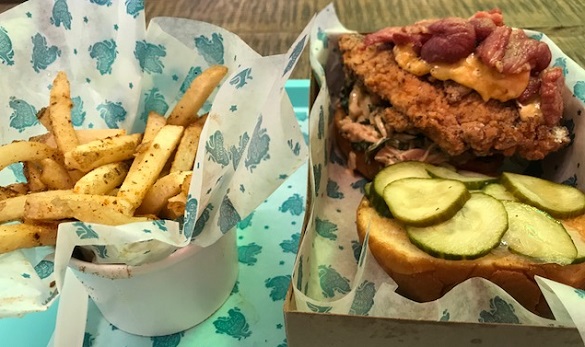 People with long memories may recall the downtown Pomona bookstore Cafe con Libros, which was in business from 1997 to 2002. But you don’t have to remember it to enjoy the fact that it’s returned under the original owners, within the same square block it occupied before. I write about its unlikely resurrection in Sunday’s column.

In Pomona, a burglar broke into the Council Chambers — due to an unlocked door — and had the run of the place for a half-hour. He made off with some electronics after attempting, a bit late, to disguise himself. Security footage brought him to justice. I tell this tale of comical crime in Friday’s column. 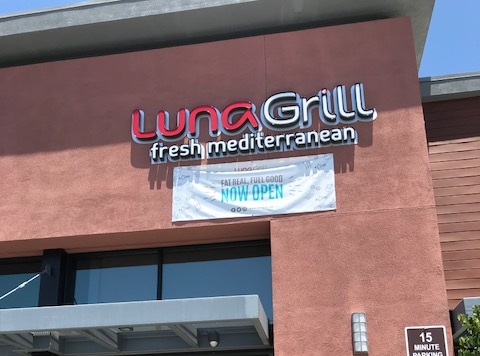 The fairly new Spruce Plaza in Rancho Cucamonga is a mini-restaurant row. I don’t believe the center has anything but restaurants: Cafe Rio, The Habit, Tokyo Joe’s and Luna Grill. (In the old days, there’d have been a Yoshinoya Beef Bowl.)

Luna is a San Diego-based Mediterranean restaurant chain with local-to-us locations in Eastvale, Redlands, Temecula and, said to be coming soon, Chino Hills.

Don’t confuse Luna Grill with Luna Modern Mexican Kitchen a few miles east. Besides the difference in cuisines, that Luna is a sit-down restaurant; this Luna is fast-casual. 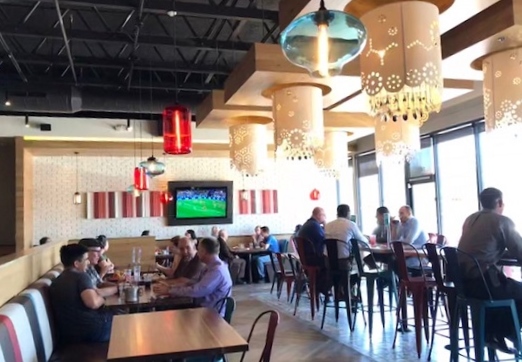 The menu has salads, plates, wraps and bowls. No stranger to Mediterranean food, I thought several of the items sounded or looked inviting. I went for the salmon plate ($14), which came with rice, pita bread and a small salad, and got carrots as my side. My friend ordered the lamb plate ($15), ditto. 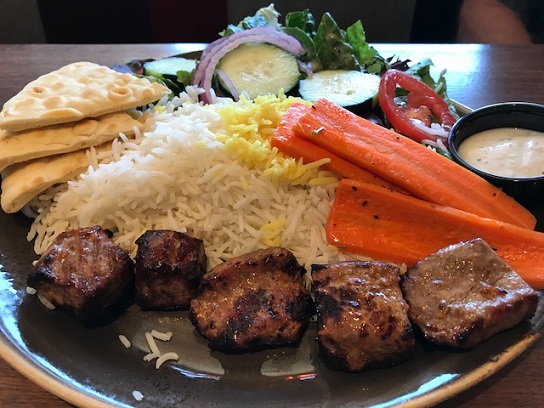 Of the lamb, which is halal (the Muslim equivalent of kosher), my friend noted from the menu board that it’s the second-most caloric entree — after the veggie plate. Hmm. 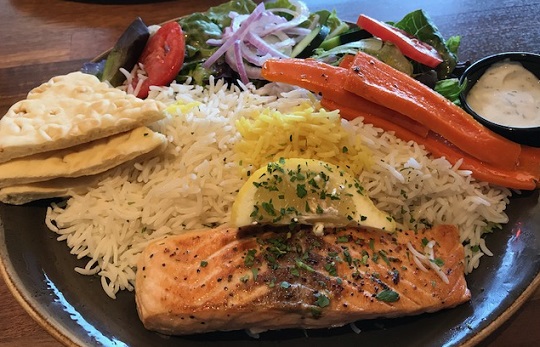 We liked our meals. I’m a fan of Mediterranean food, fine versions of which can be had in Rancho Cucamonga at Zait Bistro, Mezzaterranean and Zaky’s, plus a new Saca’s. But Luna Grill, while corporate, and sanding off some of the rough edges, hasn’t compromised too much in bringing that style of food to the masses. (Compare to, say, SpireWorks in Upland, where you can get a kebab sandwich “Philly style.”)

In other words, returning to Luna Grill would not be lunacy. 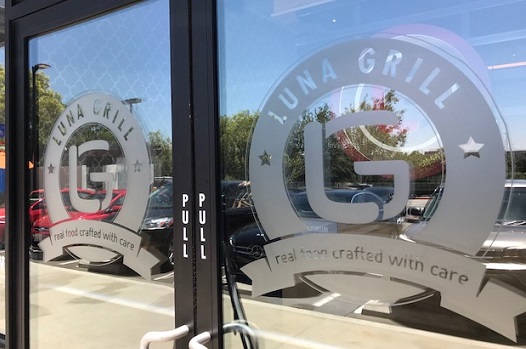 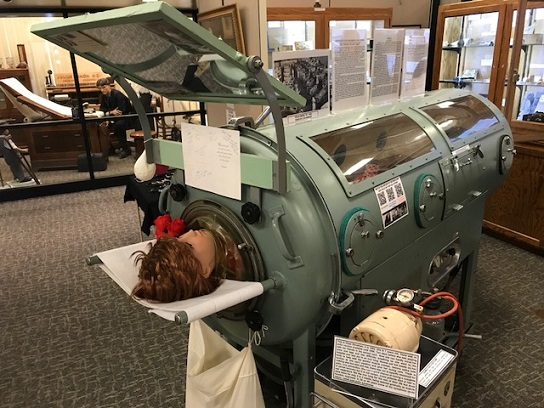 I took a tour of the low-profile Southern California Medical Museum, which recently acquired an iron lung. The rest of its exhibits of antique medical devices tend to be smaller, but they are also thought-provoking, comical or nauseating. The downtown Pomona institution is the subject of my Wednesday column. 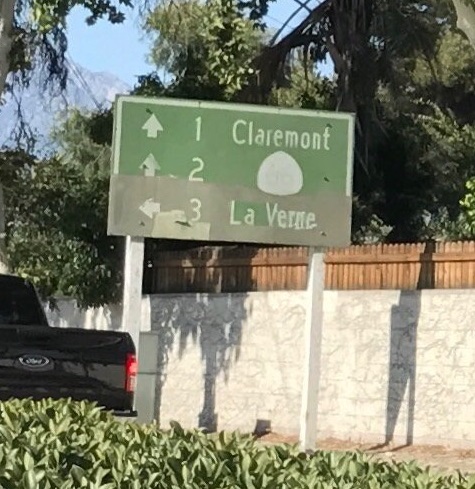 Montclair says it’s close to getting an In-N-Out. In-N-Out says that’s not true. Well, I got a column out of it anyway (especially as it was almost finished when In-N-Out replied), working in a lot of In-N-Out stuff from Pomona and La Verne. That’s Sunday’s column.

More news from Pomona: the business improvement district gets renewed for another 10 years, highlights from the council meeting, a culture corner and more, all in Friday’s column. 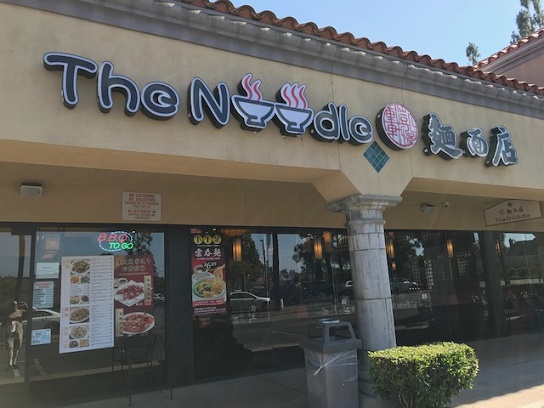 Its name may actually be Mandarin Noodle Deli, if you believe its website (which is chefyangnoodledeli.com, by the way), but all signage and the menu calls it The Noodle. Yelp has listings for both, even though it’s the same place. This spot opened in 2015 in the same center as Chaparral Lanes, I think taking over from Peking Deli. The center has a row of four storefront restaurants, including Japanese, Mexican and Chinese.

A friend and I ate lunch here recently. It was my choice of which spot to try, so after walking the length of them and eyeing menus at the entrances, I used my noodle.

The foyer was busy with takeout orders, hanging chickens and a greeter station. We were seated immediately. The dining room has a modest sense of style, including chandeliers and nicely appointed booths. We took a table, which are set up in rows as in many Chinese restaurants, where there’s a kind of food hall atmosphere.

The menu is nearly endless, page after page, and then there was a lunch menu. Specialties seemed to be barbecue, build your own soups and noodles; someone on Yelp who might know what they’re talking about said the food is from the northern province of Shanxi. 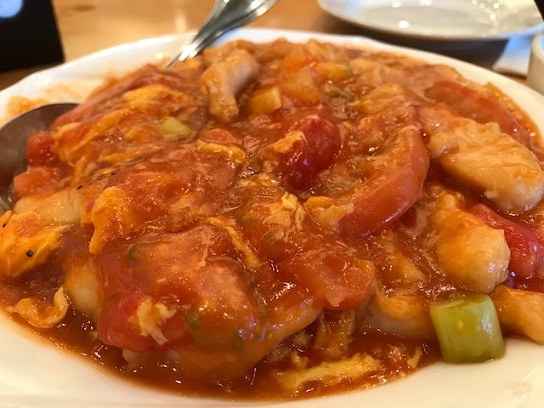 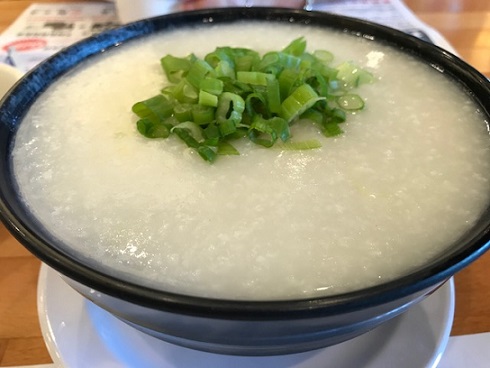 We ordered off the lunch menu: tomato with egg and chicken ($8) and seafood congee ($8.58). You’ll notice neither has noodles, but that wasn’t intentional: In my case, the server arrived and I chose something. We also got milk teas, one hot, one cold ($1.78 each). We should have got an order of rice, but it didn’t occur to us. Eh, nobody’s perfect.

We liked our items, and each other’s. We also liked the farmgirl-style outfits the servers wore, with checked shirts and matching kerchiefs. This post is more of a “this is where I had lunch” write-up than a very knowledgeable one, I’m afraid. Forgive me for kind of slipping on The Noodle. 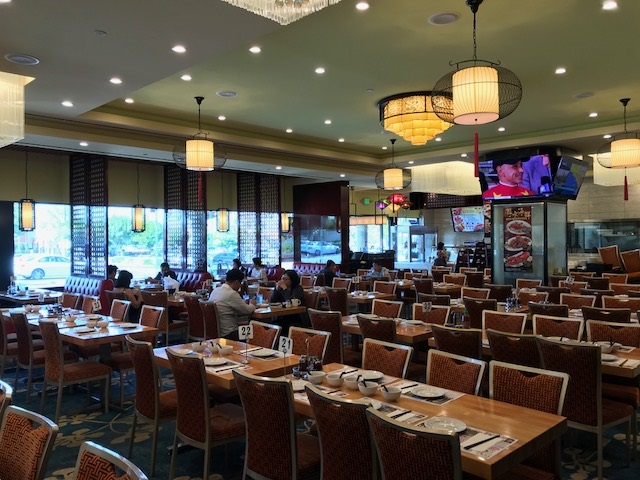 Replacing the ailing Paul Eaton as mayor of Montclair is Ginger Eaton, his wife, who was appointed Monday to serve out the final four months of his term. I was there, and the story became Wednesday’s column.