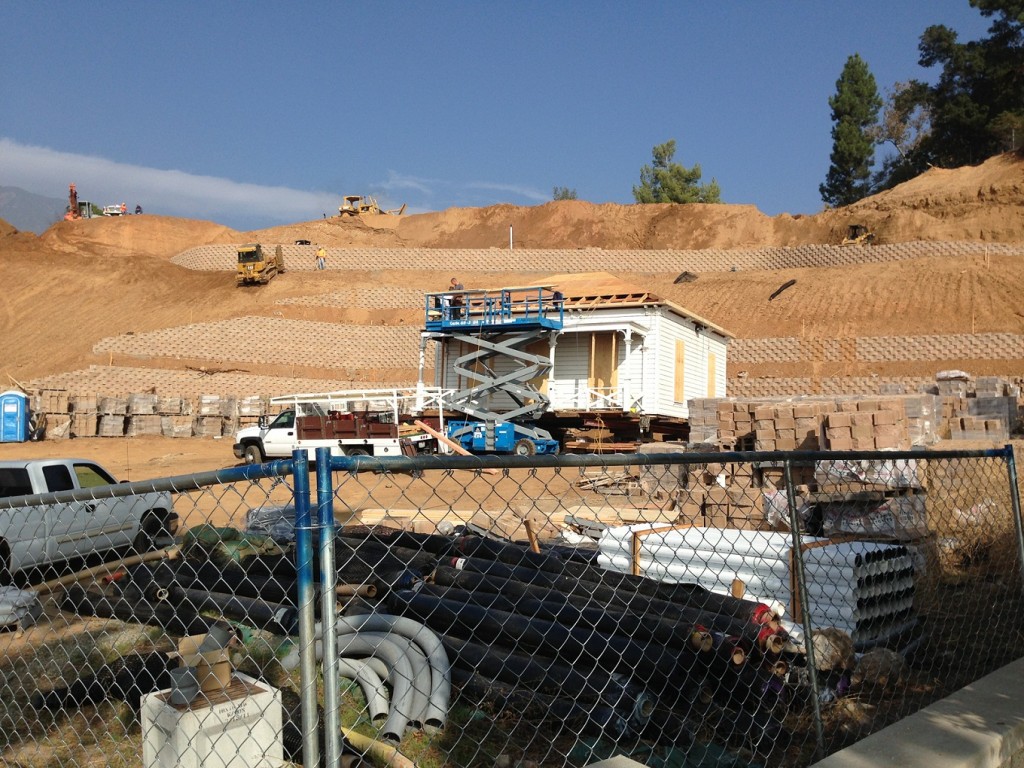 You remember our old friend, Pomona College’s Replica House, the one that’s an exact duplicate of the house where the college began? The peripatetic domicile, already moved once before, was bound for a new home off-campus at the top of Mills Avenue, where college official Don Pattison snapped this shot on Wednesday. Who knew there was that much open land in Claremont? I’m told a larger house will be built on the same property, which is near the Wilderness Park. Anyway, nice to see that Replica House survived the journey. 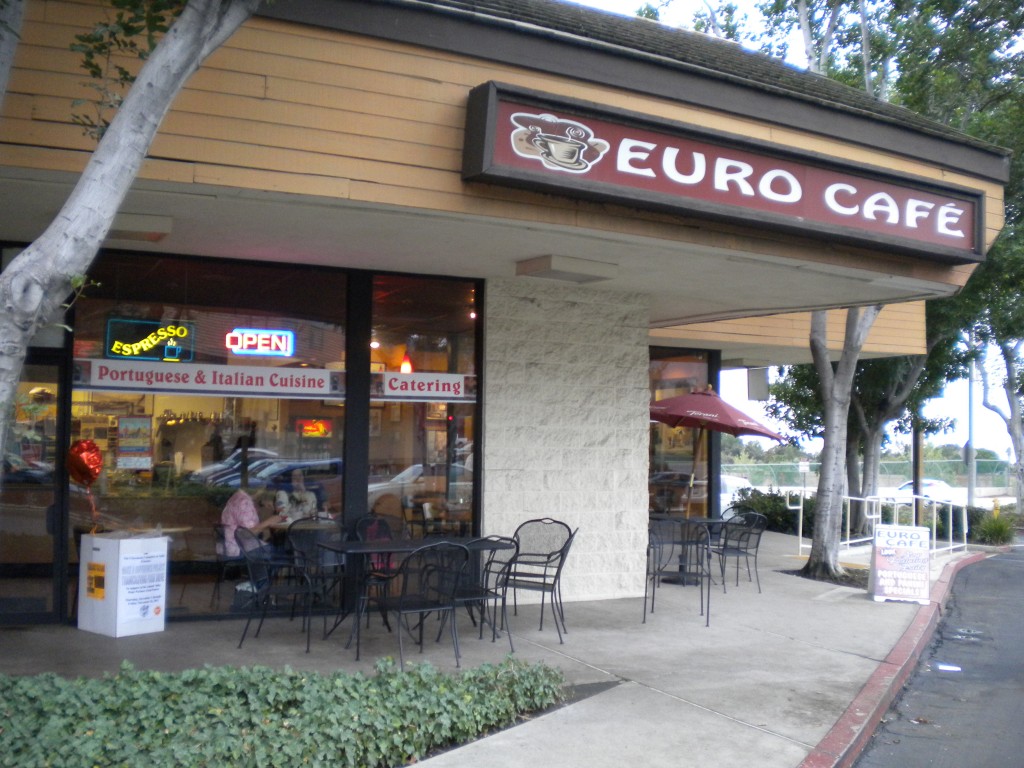 Not every worthwhile restaurant in Claremont is in the Village. Case in point: Euro Cafe, located since 2004 in the Vons center on Base Line. Far from the most obvious spot for a bistro that touts itself as the only Portuguese restaurant outside L.A., but there you go.

It’s been a few years since I’ve eaten there, but I recently returned for lunch with friends. The cafe is small and L-shaped, but it’s homey and there’s some outdoor seating. Also, there’s a mural whose scene seems to incorporate France, Spain and Italy, reflecting the influences on the cuisine.

They have breakfast, salads, soup, pastas, panini sandwiches, espresso drinks and weekday specials of a Portuguese bent. One of us had a pasta fresca special ($8.45), with penne, sundried tomatoes, artichoke hearts, onions and Brussel sprouts. (He said the dish may have turned him into a fan of Brussel sprouts, no small feat.) Others had the vegetarian panini ($7.75) and Linguica panini ($8, pictured), and I had pasta Portuguesa ($8.45), with penne, onions, bell peppers, garlic, tomato and sausage. We all liked our orders.

We overheard a couple of other languages being spoken at other tables. It’s safe to say Euro Cafe is the most continental spot in Claremont. And why not? Up on Base Line, it’s in almost foreign territory. 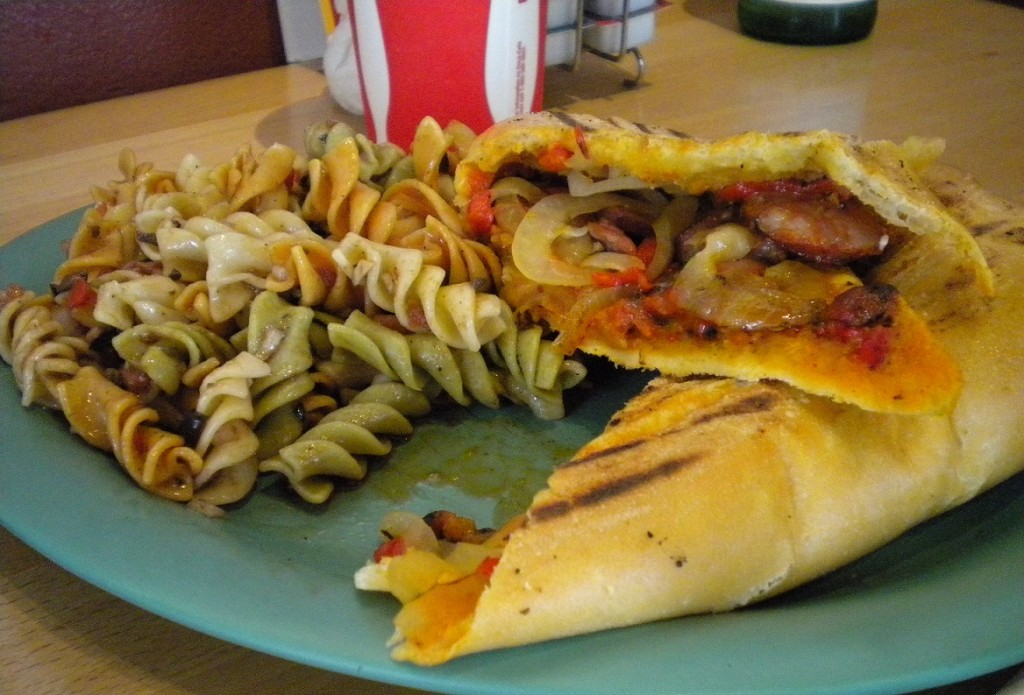 Friday’s column (read it here) begins with two items about Paul Krassner, the satirist, who spoke Wednesday in Claremont. He briefly addressed his coinage of the phrase “Twinkie defense,” among many other topics. Also in the column: other items of cultural note and a piece of weird crime news from Claremont involving a chatty drunk.

Wednesday’s column (read it here) is a recap of Monday’s Upland City Council meeting. Rather than an editorial comment, the headline is actually apt. But you’ll have to read the column to get it.

“It’s not ‘amazing,’ as Howser would say, that he has decided to hang up his microphone without issuing a press release. The host of the long-running series called ‘California’s Gold’ is known for his unpretentious manner and wide-eyed amazement.”

That manner has, of course, been widely parodied, usually with affection. One favorite of mine is this video montage titled “Huell Howser Tripping” — pairing psychedelic and desert scenes with edited exclamations by Howser — that always cracks me up.

LAist has links to some short Howser video clips, including ones from Glendora’s Donut Man and the defunct Claremont Museum of Art.

I was walking through LA’s Union Station after a Metrolink ride on Friday night when I saw, walking in the same direction, a familiar face, a fellow I know who grew up in Pomona and lives in LA. We hadn’t seen each other in months and stopped to chat.

On Sunday morning, I was back at Union Station after disembarking from another Metrolink trip when a fellow I know from Rancho Cucamonga came up and said hello.

What are the odds? It’s extremely rare I bump into anyone I know when in L.A., and here it happened two straight visits. What always strikes me about such random encounters is that a few seconds one way or the other and I wouldn’t have seen either of them. Another imponderable: How many people have I missed by moments?

My colleague Diana Sholley had a story that relies on timing. On vacation in Italy a few years ago, the Uplander was touring the Colosseum when she ran into the family that owns San Biagio’s Pizza in Upland. How crazy is that?

The worst random-encounter story I have, and thankfully this is second-hand rather than one I had to live through, involved a former editor of mine in Northern California. He was at O’Hare Airport when he was hailed by a local pest from back home, a guy who used to come into the newsroom frequently and waste his time. There in Chicago, with time to kill before his connecting flight, nowhere to run, he had to listen to the guy for an hour.

OK, your turn. Have you ever been far from home and run into someone you knew?

Reader Mark Junge writes that he discovered this blog by Googling something — we get a lot of new readers that way, and it’s great — and thought to drop me a line in hopes of jogging his memory.

“I used to live in Pomona and saw many changes there before getting married and moving away. I was hoping you might know about a couple of things:

“1. At what is now the Indian Hill Village, when it was still an open/outside mall, they used to put up a tall tinsel Christmas tree outside of the old JJ Newberry’s. I know I’ve got a picture or two of that tree, but I can’t find it right now. Do you have any pix of it, either on your blog or elsewhere?

“2. There used to be a desert painter who, I believe, emigrated over from Germany. He used to show at the weekend Griswold’s art shows, and he used to have a studio in the small building across the parking lot from the old Boys Market. Would happen to know his name, or could you tell me who might know that? (The current owners of Griswold’s doesn’t have records of that time — I checked).

“I hope to spend more time reading your blog online. I can see it’ll bring back lots of memories! (By the way, I now live in Yucca Valley outside of Joshua Tree National Park.)”

I don’t have a picture of the old Christmas tree, but surely someone (Darin Kuna? Ren?) does. And I don’t know anything about the desert painter in Claremont, but perhaps one of you do. If so, leave a comment.

Sunday’s column (read it here) answers the question: Has Upland’s Buffalo Inn really been there since 1929, as the signs say? Answer: sort of.

In a surprise to me, the establishment really was known as the Buffalo Inn from ’29 to ’39, went under various other names for the next four decades, then in 1977 became the place we know today, reviving the original name.

As a side note, this column was written in late August, with the “blisteringly hot lunch hour” that I mention occurring on a 100-degree-plus Friday. The column has been finished since early September, but one thing or another kept coming up (the Fair, Upland council meetings, etc.) and I let the column sit until a good opportunity presented itself to schedule it. Seemed like a perennial, and from my standpoint, it’s so rare to be a column ahead (usually I’m writing on deadline) that I enjoyed having one ready to go anytime I needed it. In fact, I enjoyed that so much, I stalled on running it just to savor the sensation.

I’m a little sheepish that I let it sit so long, but I hope you like it.

Feel free to comment about the Buffalo Inn, procrastinating columnists or other related topics.

Friday’s column (read it here) begins with some reader feedback about my recent capsule history of the Magic Lamp steakhouse in Rancho Cucamonga. Following that is word that 3-D artist Ray Zone, who grew up in Rancho Cucamonga, has died, and after that, several notes from around the valley. An inessential read for the day after Thanksgiving — but if you read it, I hope you like it.

Is there anything more to say than that? Just that I’m thankful for all of you who read my stuff, here and in print, and thankful for these forums that allow me to be paid for writing for a living.

Oh, and there won’t be a Restaurant of the Week post tomorrow. That feature will return next week. You’ll be eating leftovers Friday anyway, right?