You know that sprawling field north of the 10 Freeway in Ontario? Since the Reagan years it was set aside for a new, urban downtown with high-rise offices, restaurants, apartments and more. Now it’s being developed with warehouses. (This is why we can’t have nice things.) Wednesday’s column delves into the dream that was.

Above, the view from Fourth Street, looking east. 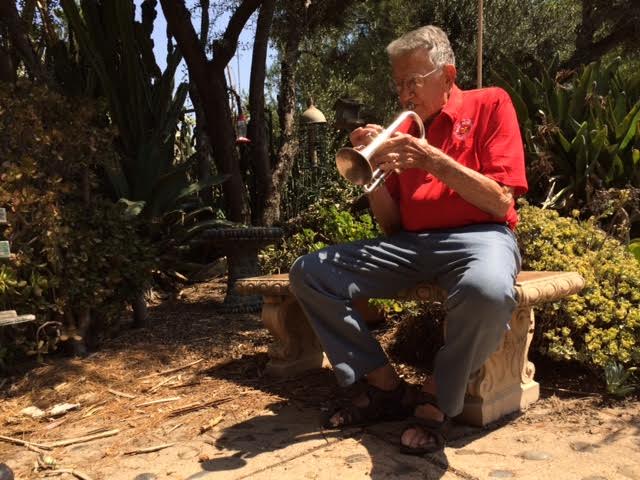 Chet Jaeger is a Claremont fixture, moving there as a boy in 1931. He’s also leader of the band Night Blooming Jazzmen, which is playing its annual concert at Memorial Park in Claremont on Monday. Sunday’s column profiles him and the band.

Above, he blows a few notes for me in his yard. Be sure to watch the two videos attached to the column too. 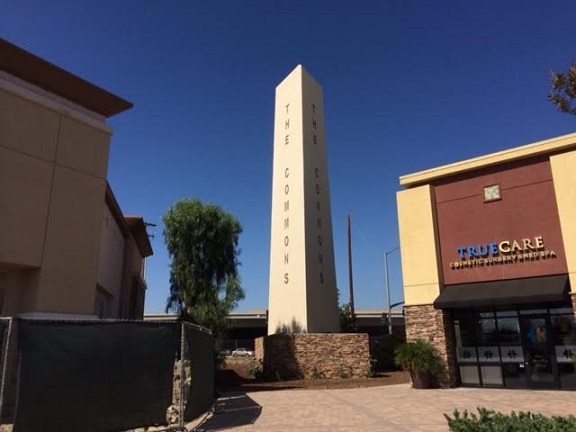 In Chino Hills, there’s now a 63-foot cell phone tower disguised as a Washington Monument-style marker. It’s at The Commons, a shopping center by the 71 Freeway. That burst of silliness leads off my Friday column, followed by news items from Ontario and a Culture Corner. 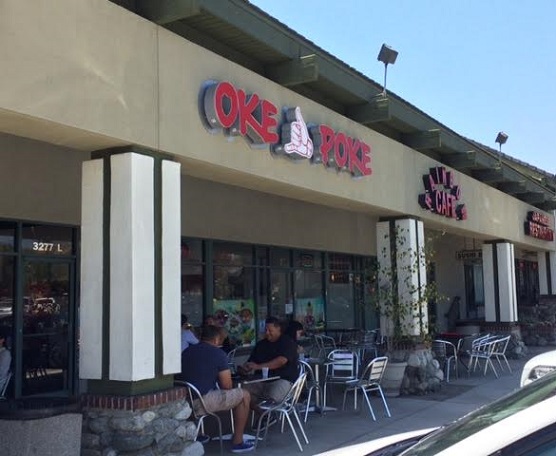 Poke, as the menu helpfully explains “is a classic Hawaiian dish comprised of sliced, raw fish and various mix-ins.” It’s becoming popular out our way, with several poke spots having opened in Rancho Cucamonga, for instance, and two in the works for Claremont, which currently has none.

Oke Poke, pronounced like okey-dokey, is a chain with a location in Chino Hills in Payne Ranch Center across Peyton from the Shoppes. It opened in 2015. I met a CHills friend there for lunch recently for my second poke experience this summer (the other was in LA).

As with Chipotle or Pieology, you get in line and proceed to make a series of choices for your bowl: a size (regular $9, large $11), a base (white or brown rice, salad, noodles or cucumber), add-ons, fish (up to five selections for a large), sauce and toppings. Or you can save some brain cells and order a pre-selected bowl. Bowls are all they have, except for miso soup and dessert. Note that all seafood options are the same price, a rarity, and that avocado is free, likewise. 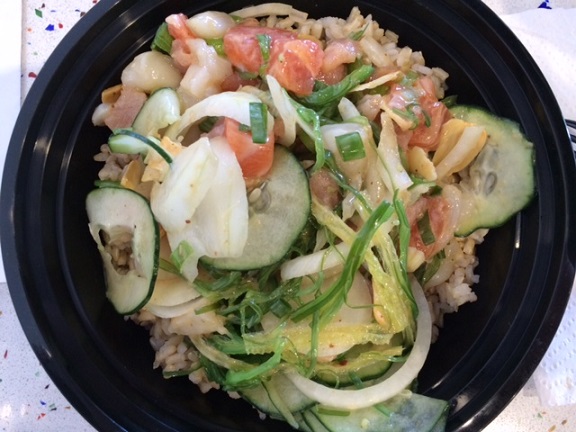 I got salmon, ahi tuna and scallops atop brown rice with moku seasoning, above; my friend had ahi atop a salad with sesame dressing, below. Both were regular sized. 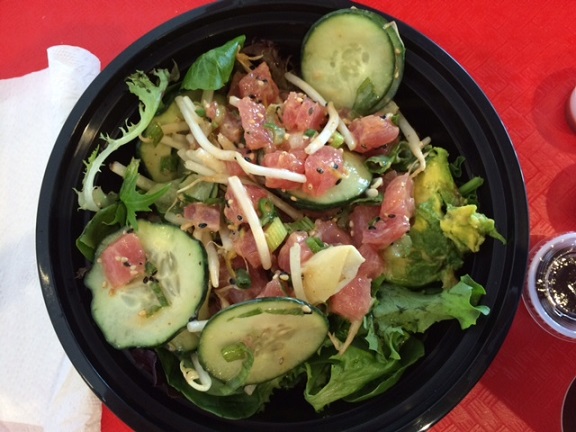 They were tasty, light but filling. “I think that was a carb-free lunch,” my friend said with satisfaction. Then she pulled out her phone and played Pokemon Go for a minute (her daughter is hooked too) when a virtual creature appeared at the table next to ours.

Yes, fittingly, the poke restaurant is a poke stop. 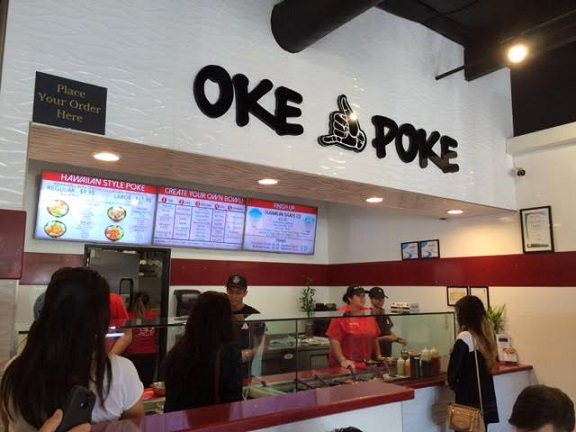 I take a look at the local races on the Nov. 8 ballot and note the most interesting, starting with Ontario, where an awful lot of people want to be elected to something, including three members of the same family. That’s my Wednesday column. 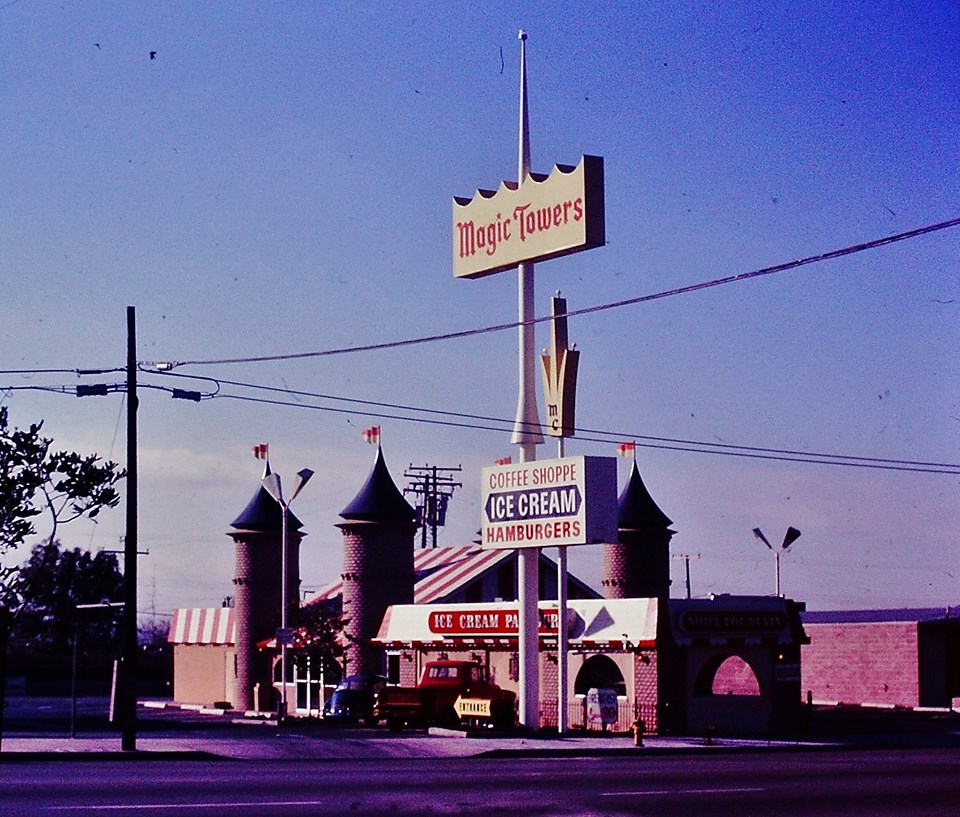 Karen Bristow was never elected to office, but she served in various capacities in Chino Hills going back to 1969 to make the community a better place. Now she’s moving away. My Sunday column pays tribute.

In Friday’s column, an entertaining Chino City Council meeting — my favorite kind, although the tense ones are enjoyable in a different way — as well as some Culture Corner items and a Valley Vignette. I admit to immoderate pride over my headline. 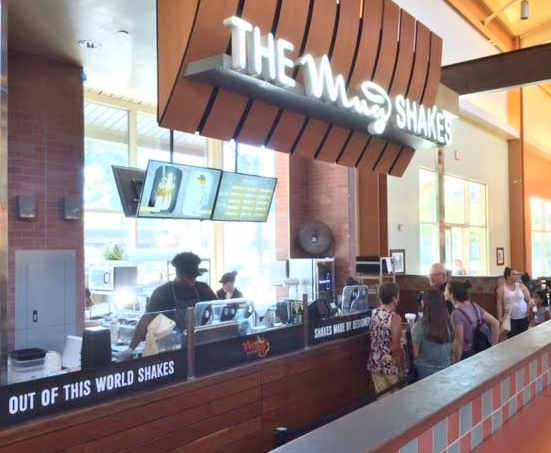 The Mug Shakes, which opened in May, is a locally owned stall in the Victoria Gardens Food Hall, a non-chain that could become one. It created a sensation upon opening with its decadent creations that are served in glass mugs and spill out of them, with long lines reported on weekends. My colleague Neil Nisperos wrote about them. Fox 11 did a feature too.

As is often the case with me, I was curious but didn’t act on my curiosity for a while; it’s not often I’m at Victoria Gardens, and the messy look of the shakes was a little off-putting, even while it might draw in others. I kind of forgot the place was there. And then a friend from North Hollywood visited and posted photos, and, shamed, I made a special trip on a lunch break this week, when the mercury was 100. 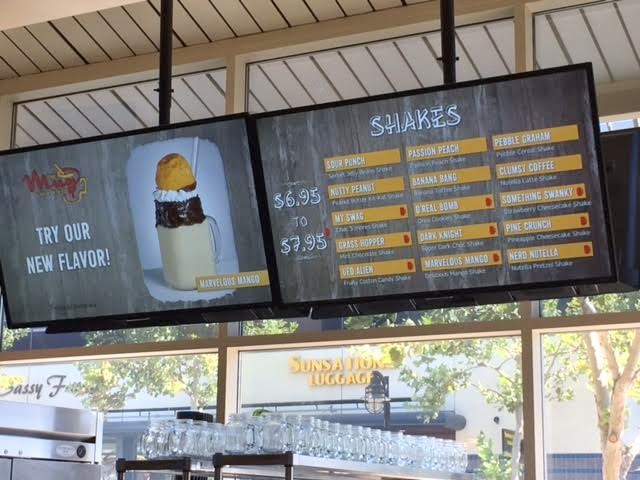 After lunch, I went to The Mug Shakes, where only a couple of parties were in line. I had time to read the menu board, where photos of the shakes scroll by. A few sounded enticing for my tastes: the Nutty Peanut, with peanut butter and Kit-Kats, the Pine Crunch, with pineapple cheesecake, the O’Real Bomb, with Oreo cookies, and the Grasshopper, with mint chocolate chip ice cream. Some shakes are $7 while others are $8, presumably due to ingredients or assembly time, as all are the same size.

I went for the Banana Bang ($7), with bananas and toffee, in part because it seemed like a (very relatively) lighter offering, and somewhat tidy. It arrived about five minutes later.

There were banana chips affixed to the rim and, inside, fresh banana pieces amid the ice cream, plus smears of toffee inside and around the rim and a topping that some say is marshmallow cream rather than whipped cream. 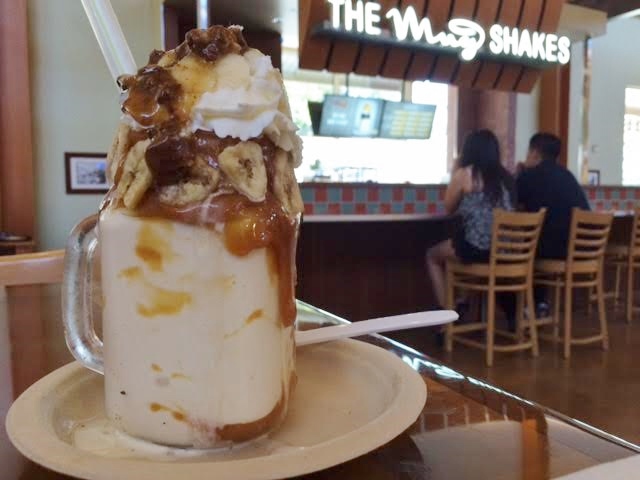 Two could share one of these shakes. The elaborate, spillover presentation is eye-catching, if not all that appealing to me. What surprised me was that the shake wasn’t made with premium ice cream. I expected more after all the hype and the care spent on the appearance. Overall, my shake was very sweet but didn’t taste that great. It felt like wasted calories.

Toppings may not impress either: The few, lonely naysayers on Yelp, where Mug Shakes currently has a 4.5 rating, point out that the brownies in one shake are the processed Fiber One brand, not fresh-baked. If they’re going to go to this much trouble, why not use better ingredients and charge another $2 or $3?

“Does it come with a shot of insulin?” one friend asked after seeing a photo of my shake. My NoHo friend said she’d had the Marvelous Mango shake and found it refreshing. “I asked for the calorie counts,” she confided, “and the worker there laughed at me.”

You can take the mug home if you like — the staff will give you a plastic bag for it, since it will be goopy outside and in — or you can return it, which I did. Would I ever go again? Ehh, probably not. At the VG, you might get a better, and certainly more conventional, shake at The Melt (six flavors, including Snickerdoodle) or Johnny Rockets.

Below is a photo from Yelp of a more typical Mug Shakes offering, the Pebble Graham (I think), that may strike you as either challenging or disgusting. I report, you decide. 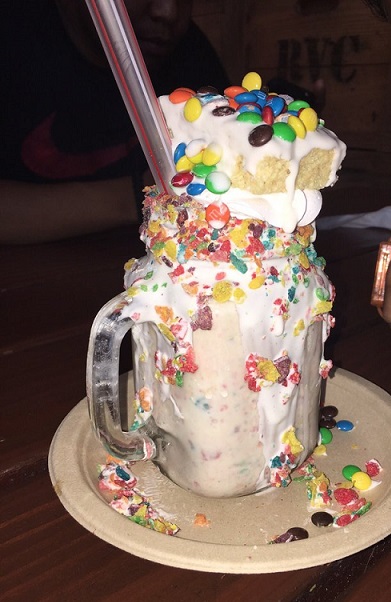 I visited two museum-type exhibits recently, one in downtown LA about the long-gone Claremont sculptor Burt Johnson, the other in Ontario about Route 66. Three Culture Corner items and a Valley Vignette round out Wednesday’s column.