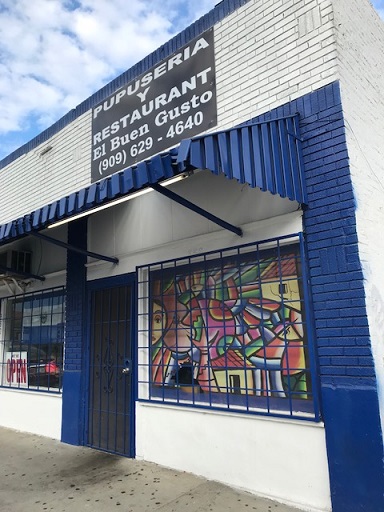 Reader Helen Uceda recommended El Buen Gusto to me possibly three years ago (ulp), seconded by a friend of mine, and the restaurant was dutifully added to my list of places to try around the region. Time passed, as it does, until recently I scanned the list and I made a point of finding the restaurant, which I didn’t believe I had ever noticed despite it being on the fringes of downtown Pomona.

But there it was when I looked for it, in a nondescript building alongside a barber and a botanica with its own tarot reader. I parked around the corner and stepped inside for a late lunch. 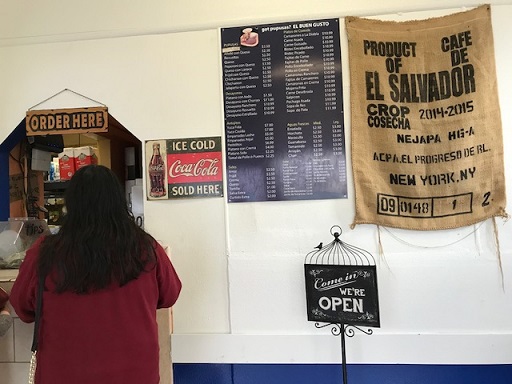 Even after 3 p.m., there were a few customers inside the modest restaurant. You order in the lobby at the window, where they also dispense takeout orders. I asked the employee, who might have been an owner, what people ordered, and she listed a few items — pupusas, fajitas and beef soup are the ones I recall — while saying the pork, cheese and bean pupusas were the most popular. 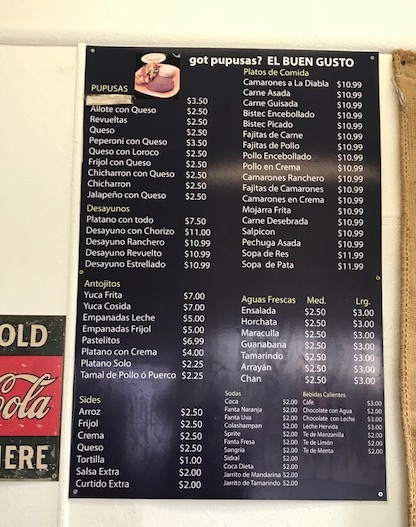 I got two of those — they’re known as revueltas — and a guanabana agua fresca. She said I could pay upon leaving.

There are two small adjoining dining rooms, probably evidence the restaurant has expanded into the next door space. An El Salvador flag is displayed in one window. A Spanish-language program played silently on a TV. After a while my food was delivered: a plate of two thick, pancake-like pupusas, plus a bowl of a vinegary slaw to use as topping. 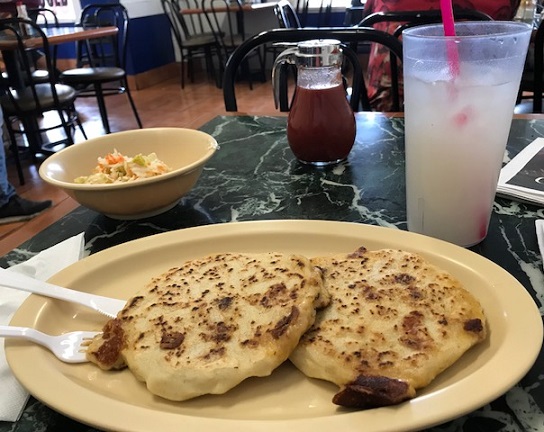 I’ve had pupusas a handful of times. These might be my favorite, stuffed, delicious and filling. The guanabana drink was sweet but light, a good combination.

El Buen Gusto may not be much to look at, but the food is good and the staff polite. I should have tried them three years ago. 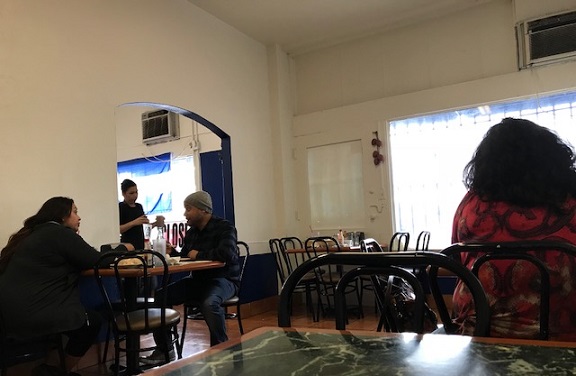 The long-shuttered Pacific Electric train depot in Rancho Cucamonga is due to be repaired and reopened next summer, with the hope of having one or more tenants leasing space in the city-owned building. I offer an update and some history in Wednesday’s column.

It’s been a while since I presented any literary references to the Inland Valley, but Sunday’s column brings two, plus some Culture Corner items and a Valley Vignette.

I knew about Cal Poly Pomona’s WWII history, as do readers of “Pomona A to Z,” but I didn’t know that some rescued horses from Poland ended up there. Not until a talk earlier this month by writer Elizabeth Letts, that is. I tell the story in Friday’s column.

You weren’t really looking for a Restaurant of the Week today, were you? I did write one but due to the holiday am saving it for next week. Enjoy yourself today and see you back here Friday.

Ah, Pomona, city of wonders. In a warehouse of the Museum of Neon Art, a neon dragon sign that used to perch above the marquee of Grauman’s Chinese Theatre is being restored. I visit to watch two craftsmen at work and hear about the project, for Wednesday’s column. 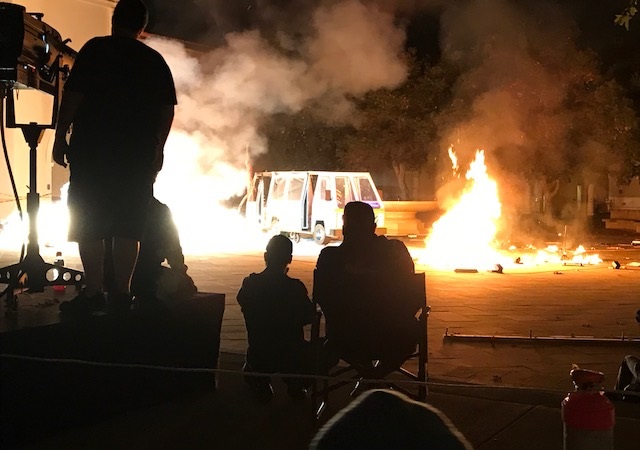 The bus was pulled into place, then fireworks began going off at ground level. Recorded sounds of gunfire, breaking glass and shouted Spanish were played, the better to replicate the chaos of drug cartel violence in Mexico. It was eerie and slightly disturbing.

At the end, the “It’s a Small World After All” song played, perhaps to puncture the tension, perhaps to remind us that such scenes take place in our hemisphere, or perhaps to stick that song in our heads and drive us up the wall. (I was still catching myself humming it the next day.)

The bus was largely still intact, which I don’t think was the plan. We were all directed to repair to Frary Dining Hall for refreshments and a look at the “Prometheus” mural. When we left Frary, the bus was down to a skeletal frame. Hmm, what did we miss?

There’s an electronic billboard along the 10 at Mountain Avenue, as motorists have discovered this past week. Blight or bright? I report, you decide, to quote a phrase. Also: reports from author events in Claremont for Hilton Als and Chris Matthews, a Culture Corner of events taking place today, and more, all in Sunday’s column.

I took in the buzzed-about opera version of “The War of the Worlds,” which used parking lots, air raid sirens and Disney Hall in an unusual, fun production at multiple sites. I write about it in Friday’s column. Watch the skies! 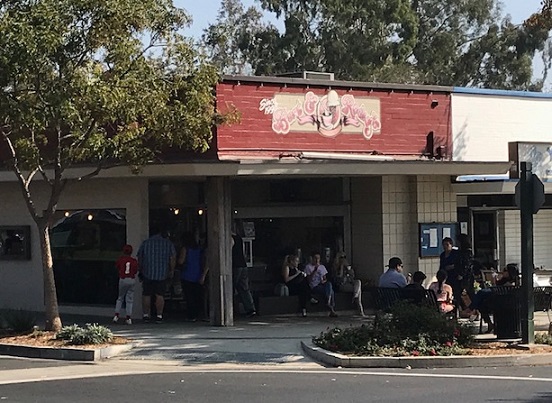 Ice cream and candy shop Bert and Rocky’s started in Upland in 1989 and expanded to Claremont in 1998; the Upland location, by the high school, has closed, leaving the Claremont shop as the mainstay.

It’s a popular spot with a lot of foot traffic, great homemade ice cream and a community-oriented outlook with school fund-raisers and the like.

I’ve gone to Bert and Rocky’s since its Village location opened — not frequently, but probably once a year. It wasn’t until meeting a friend there during October’s heat wave that it occurred to me to make it a Restaurant of the Week.

They’ve got a couple dozen ice cream flavors, plus sorbet and other non-dairy permutations, at any given time, available as cones (their waffle cones are housemade), dishes, sundaes, banana splits, freezes and milkshakes. 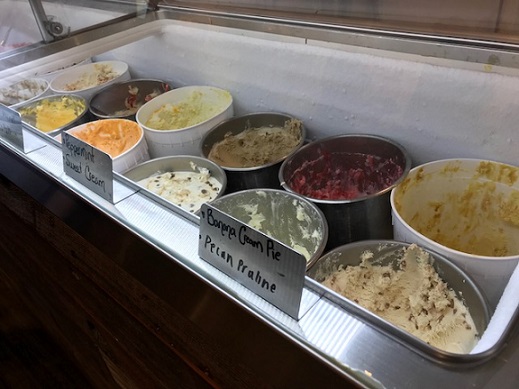 I went for Butterfingers and cream in my go-to size, junior scoop ($3.45). Seems plenty big to me. 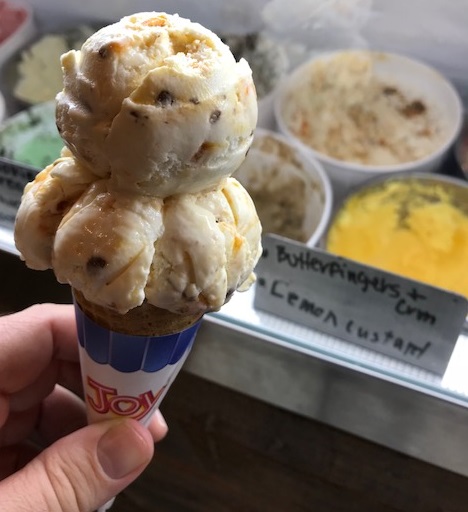 Bert and Rocky’s also has fudge, bark, caramel apples, chocolate-dipped items, scooped candy and nostalgic packaged candy like Necco wafers. There are a few tables, a bar, some outdoor chairs and, on most afternoons, a crush of customers — but also a friendly and patient staff. 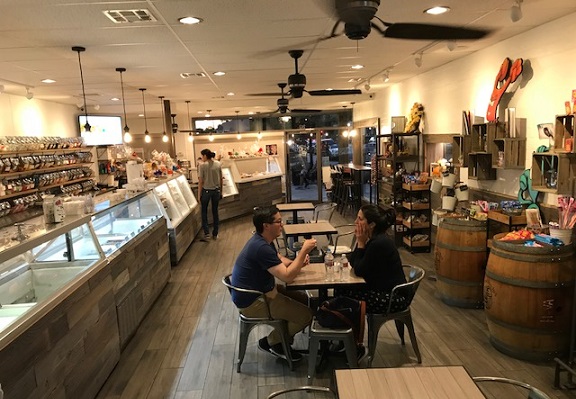