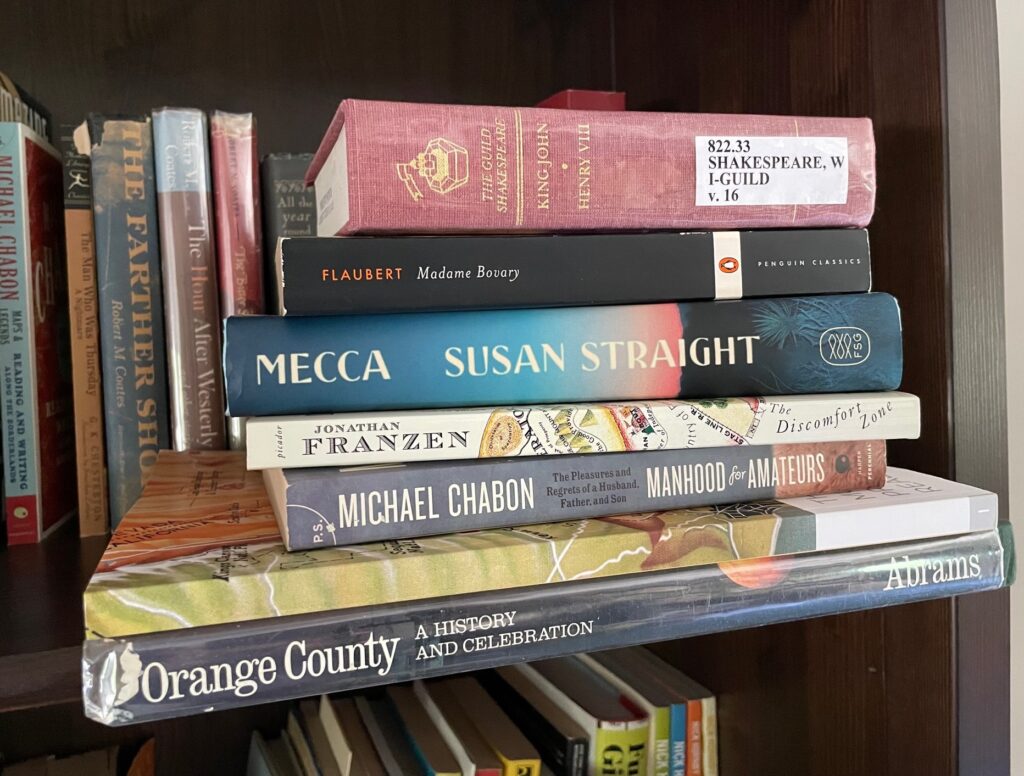 I wrapped up my May reading early (more on that anon), allowing me to get this written and posted expeditiously for a change. I read seven books in May, four nonfiction, three fiction. Here’s the rundown.

“Orange County” (1988): A decent overview of the county, with lots of photos, put together by the L.A. Times. There is far more text than might be obvious, making this book kind of a slog, frankly. Devoting the first, dense chapter to “prehistoric Orange County” (archaeological sites, etc.) was almost enough to make me give up.

“Manhood” (2009): Warm, charming essays about fatherhood, childhood, geek masculinity and the need for a man version of a purse (knapsack, briefcase, messenger bag, etc.). Two days after finishing I was already forgetting a lot of it, but they were enjoyable in the moment. I listened to the audiobook, read by the author, while referring at times to my paperback.

“Disappointment” (2006): After the above, I was in the mood to transition to a similar book, but in a very different, more astringent key. In Franzen’s unsparing essays on his childhood and young adulthood, as well as his adult fixation on birding, he explores his own self-consciousness, pettiness and unsympathetic behavior in witty, self-lacerating prose. In the audio version, his sardonic narration is its own kind of perfection. I can see why some might hate this book, but I thought it was great.

“Mojave” (2021): This is the first of (so far) four books (journals?) collecting essays with photos, usually by Stringfellow, about aspects of desert existence, as found on her mojaveproject.org site, sometimes with audio or video. She visits a gem and mineral show in Trona, watches racers on El Mirage Dry Lake and checks out a ring of creosote bushes that may be 12,000 years old. The contents span Amargosa to Zzyzx.

“Mecca” (2022): This novel spans Greater Los Angeles, with portions set in Venice and Los Feliz, but it’s largely a story of people navigating race, class and language in the Inland Empire. As a resident, it’s strangely thrilling to find Riverside, San Bernardino and the Coachella Valley as settings. And it’s a reminder to non-residents that locales that aren’t trendy and are composed largely of people of color can make for good fiction too. I will say that there were too many characters to comfortably track as the disparate threads began to interweave, at least over a 10-day read. But I enjoyed the ride.

“Madame Bovary” (1857): Imagine, women can be complex characters with needs and desires who can be dissatisfied by life and limited by the options available to them! This must have been a revelation in 1857. (For too many it would be a revelation here in 2022.) Is this the first modern novel? Possibly. It was also a page-turner.

“King John” (1595?): Nearly everyone has feet of clay, not least the king who wasn’t in the line of succession and flails about trying to legitimize himself and fend off his legion of enemies. One of the lesser-known plays, this is morally ambiguous and politically astute, even if sorting out the characters, allegiances and claimants to the throne was sometimes beyond me.

“Orange County” aside, these were all worthwhile, with “Madame Bovary” the obvious winner. I felt I came to it late: One friend told me he read it in college, another said she read it in high school. Did I say friends? I meant former friends.

The Shakespeare was in my unwieldy college anthology from 1985 (but I checked out a portable version from the Pomona Public Library). The Flaubert was bought in 2003 from B&N. (To think that a few months ago I considered culling it, wondering if I’d ever read it. Tsk, tsk.) The Chabon was bought in 2011 in the Borders closing sale, eyes on the discounted price. (Had I known I wouldn’t read it for 11 years, I might have thought twice.) Franzen is from 2019 from Powell’s; Emmons from Yucca Valley’s Sagebrush Press in 2021; Stringfellow from Yucca Valley’s Acme 5 Lifestyle in 2022; and Straight from her UCR Arts talk in 2022 (and signed!).

I read “King John” late in the month and was going to squeeze in a second play by the Bard before the 31st, before deciding to go easier on myself. Did I need to read eight books this month? Why not use the last week to read ahead from a longer book?

So I picked up “The Portable Conrad.” I’d read the introduction, all 50 pages of it, on Super Bowl Sunday 2021, gulp, and never went back to the book. At 750 pages, it was a bit daunting, and not a book I’d be likely to read in one month. Resuming it during this freed-up week, I surprised myself by reading almost to page 300 in the course of five days. Good ol’ Joe Conrad. Look for this in my July (?) Reading Log. A theme month is coming in June.

How was your May in reading? You had 31 days, if you chose to use them. (Maybe you read ahead too.) Share what you read in the comments, please. 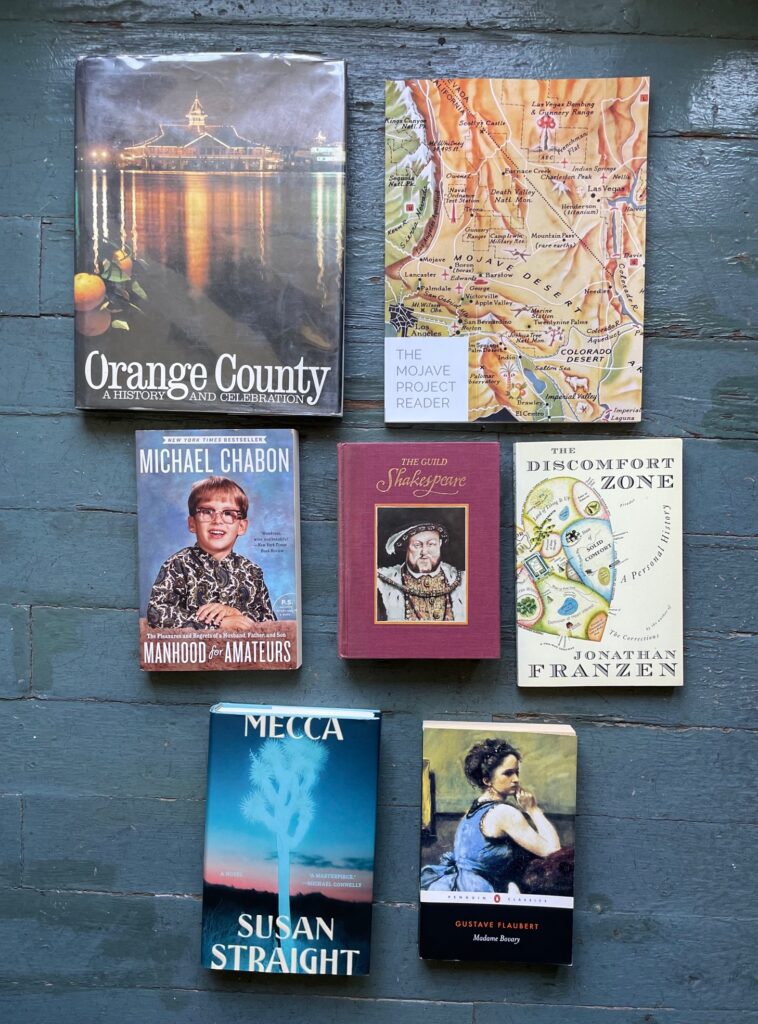 In an annual ritual, I recount a few highlights, lowlights and observations from this year’s LA County Fair, which ends Monday, in my Sunday column.

The LA County Fair’s only direct link to its 1922 start: MacPherson’s Ice Cream, which still has a stand a century later. Its fourth-generation owner and I talk about its history (and resolve a mystery plaguing me for 20 years). It’s the subject of my Friday column.

This being the Los Angeles County Fair’s centennial, you might be wondering what the 1922 fair was like. I do my best to describe it based on newspaper stories, and make a few jokes about it too, in my Wednesday column.

I return to Moreno Valley to check in on Riverside County’s second-largest city. Its City Council was down to three members at one point last year after two deaths, but after two elections, it’s back to five members, and a mayor pro tem was selected unanimously at Tuesday’s meeting. I write about the possible return to normalcy in my Sunday column. (Some members of the public are still angry, though.)

The 35-year firefighter and 18-year councilman in Rancho Cucamonga was mourned Thursday. I attended the funeral and mingled afterward, where I got a funny item. I also plug my Saturday book stop in Ontario and a Sunday event in Pomona, all in Friday’s column.

The university outside San Bernardino owns a Kerry James Marshall painting that is going up for auction Thursday from Sotheby’s and is estimated at $8 million to $12 million. So how did a medical school end up with a valuable painting? I tell that unusual story in my Wednesday column.

Readers from the IE and SGV are asking me where and how to dispose of unwanted books after I wrote about my own book purge. Friends of the Library bookstores are a good option. Riverside has its first such store. Used bookstores, Little Free Libraries and Goodwill are other possibilities. That’s the subject of Sunday’s column.

Livestock competition at the LA County Fair ended in 2007. But now it’s back. (The fair’s centennial motto is, after all, “Back to Our Roots.”) I find out what it’s all about, and see some sheep, for my Friday column.

A sheriff’s sergeant was stunned when he found Carl Barks, a Disney comic book artist and one of his childhood heroes, living in Temecula. And I attend a silent movie screening in Riverside’s Mission Inn. I write about both in my Wednesday column.