First Candlelight Pavilion, now Center Stage Theater. Fontana City Hall is closing its city-owned theater for a renovation and a new focus on live music. That’s a positive, unless you’re a fan of dinner theater. The last show is Aug. 14. “All good things come to an end,” longtime operator says. I write about the impending change in my Friday column.

An ex-Kaiser Steel worker recalls the great pay and the great dives around Fontana to spend it at. He offers a window into a vanished era in my Friday column, which also has a few items from around the Empire.

Phil Burum (and if that last name rings a bell, he’s Jeff’s brother) left housing development to work for Fontana City Hall as deputy city manager in charge of planning and building. That’s an unusual transition, from the private to the public sector. I sit down with him to hear about his background, why he made this leap and what’s envisioned for the city of 220,000. That’s the subject of my Wednesday column.

I attended a Fontana City Council meeting (ehh, I had a free evening) and found a nearly full house there to support or oppose a proposed warehouse. With 40 speakers, you know there were both passion and misstatements. The proceedings are the subject of my Friday column.

I was there at the council meeting when the Fontana city manager was hired (February 2020) and returned Tuesday after it was announced that he’s resigning to take a new job. “I saw you come in,” I told Mark Denny, “and I thought I should see you out too.” He smiled. I write about the meeting in a relaxed Sunday column.

Just when I’d gotten interested in giving Fontana more coverage early in 2020, everything shut down. So much for that. But I was back in the city this week for the opening of a sports park on the edge of downtown. Remarks by a mayor, balloons, a ribbon cutting — it was nice to be at a civic event again. I write about that, with a couple of other items, in Friday’s column.

I was back in the Fontana Council Chambers this week for a meeting at which a city manager, the first new one since 1999, was hired. His name is Mark Denny and he’s from Dana Point. I write about him and a few fun moments from the meeting in Friday’s column.

Btw, in our interview after the meeting ended, he got in the first question: “Are you going to update your food blog?” My mouth probably fell open. He grinned. The man does his research.

He says he’s a fan of “Diners, Drive-Ins and Dives,” prefers family-owned restaurants to chains and had already eaten at El Gallo Giro, one of only a handful of restaurants in the city about which I’ve blogged, and which he called “fantastic.”

I’ll have to hit some more restaurants in Fontana, if only to ensure the city’s top executive doesn’t go hungry. Before the meeting, I pulled into a taqueria for a future Restaurant of the Week.

Wait, Fontana is the subject of two straight Sunday columns? Well, why not? I went to Tuesday’s City Council meeting and watched the retirement ceremony for a 30-year employee, and it was very sweet. That includes the story of how her future husband showed up to work to propose to her in unusual fashion. I wish Debbie Brazill well in Sunday’s column.

Ken Hunt’s abrupt departure as Fontana city manager last summer raised eyebrows. I’d been wanting to look into this and finally did, learning that although it was described blandly as a retirement, Hunt had to sign an agreement not to defame the city, and for his silence gets a full year of pay and benefits. I write about all this in Sunday’s column. 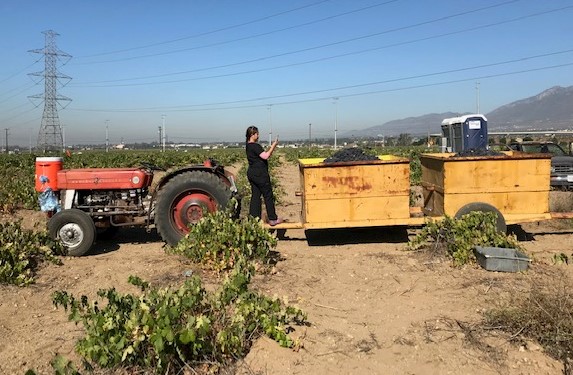 Grapes are being harvested in north Fontana off the 210 Freeway by workers for Galleano Winery. At 220 acres, it’s the largest vineyard in the Inland Valley. The grapes are great, Galleano ways, but the property’s long-term future is in doubt. I write about this age-old tradition in Wednesday’s column. Above, passerby Carly Palomar takes photos of a gondola full of grapes.