This was the word that decided the 2009 Scripps National Spelling Bee. It means, according to news accounts, “indifferent in religion or politics.”

To use it in a sentence: “People who fill the Daily Bulletin’s letters to the editor section are not Laodicean.”

I’m sure I would never have tried Fong Noodle, a small Chinese restaurant outside the Edwards 14 theater off the 10 Freeway, if not for a tip from reader Stephanie Ulmer. Ulmer said prior to Fong’s arrival, it was typical buffet-style Chinese. Now they cook your food fresh when you order it. She and her friends love it.

Curious, I gave Fong Noodle a try Wednesday evening. The menu has Americanized Chinese stuff like broccoli beef and the ubiquitous orange chicken, but also boasts chow fun (broad flat noodles) and Singapore-style noodles (thin, spicy), both of which are relatively rare in these parts.

I ordered shrimp chow fun ($6.95). The order was passed from the middle-aged woman to the middle-aged cook, who sprung into action. A simple salad was brought out, followed several minutes later by a large plate of noodles, plus an egg roll. The noodles were fresh, the shrimp plentiful and the portion enormous; I took home half.

They make their own noodles, the counter-woman confirmed. How about that!

The storefront location is sparkling clean, the decor understated: paper lanterns, a decorated fan and two pieces of traditional art. There are two outdoor tables and plenty of inside seating. And, that evening, plenty of empty seats.

“I was initially afraid to write to you,” Ulmer confided, “because once you taste it, you will rave too, and I don’t want King Taco-sized lines to form for the tasty chow. But in this economy I thought it was better to send more folks than to keep it to myself.”

Thanks for divulging your secret.

On Sunday I traveled with a group from downtown Pomona to Dodger Stadium for the Dodgers-Angels game. The awkwardly named Downtown Pomona Owners Association (a business improvement district funded by property owners) arranged the getaway and chartered a bus. I paid my $42 ($32 for the ticket, $10 for the ride) and climbed aboard.

You can see photos on the Metro Pomona blog in the May 23 entry “Freeway Series.”

I went through a baseball phase as a boy, one summer buying bubblegum packs right and left in my futile attempt to collect every Topps card, but my interest cooled by the early ’80s. (The Cardinals were my team. These were the days when Joe Torre was a player.)

I’ve been to a total of four Dodgers games in my dozen years here — although two have been this season, including Sunday’s game, which was my first-ever day game. That’s what made the invitation irresistible.

So I was there more for the experience than having any rooting interest. Dodgers, Angels, whichever. Most of the 40-some people in our group were Dodgers fans, leading to incessant kidding of DPOA executive director Larry Egan and his wife, who were in Angels caps. The kidding began sticking in everyone’s throat as the Angels overcame a 4-0 deficit and eventually won 10-7.

Two Pomona council members, Tim Saunders and Danielle Soto, were in attendance. Saunders was cheering for the Dodgers while Soto was observed cheering for both teams. She was also overheard talking about “points.” Maybe she was there more for the experience too.

Food-wise, some of us got our Dodger Dogs grilled; the stands for the grilled version are on the levels behind home plate, near where we were (blue reserved section). While I always get a hot dog at any ballpark, including the Epicenter, I’m going to be controversial by asserting the unspeakable: Dodger Dogs, grilled or boiled, are very standard, if not substandard, hot dogs. There, I’ve said it, and I feel better.

Speaking of insults, Dodger fans certainly can be boorish, if harmlessly so. As their team slipped to defeat, occasional pouting cries of “Angels suck!” rent the air. One has to wonder what it says about the Dodgers if a team that sucks was able to beat them.

But the experience was a lot of fun, the company splendid, and Dodger Stadium remains an old-school gem.

On the way to the bus, Saunders lent a hand to some strangers by taking their photo. The group of six was evenly split between Dodgers and Angels fans. Saunders was in a Dodger cap.

A passerby exclaimed, “You’re not a real Dodger fan if you’re taking photos of Angels fans!”

Above are the Ebony Hillbillies in (I think) the 42nd Street subway station, doing old-timey songs such as “Hard Times.” There was a decent-sized audience, as seen below.

Speaking of old-time sounds, how about this fellow on musical saw? I think he was in the Rockefeller Center station. He was performing some recognizable pop chestnut that had me humming, although the title has since slipped my mind.

And at the Cathedral Parkway platform, this man was regaling us with Vivaldi’s “Four Seasons,” and quite well.

That’s one thing we don’t encounter much in suburban L.A.: random music. Our loss.

While in New York City, I made a point of tracking down the fountain depicting the Goddess Pomona. It’s just below Central Park in the Grand Army Plaza outside the Plaza Hotel. Ooo-la-la!

It’s a grand location for a grand figure. Tony Fifth Avenue is a few steps to the east. Horse-drawn carriages clip-clop past. In the other half of the plaza across Central Park South, facing the Goddess, is, of all people, General Sherman astride a horse.

The Goddess of Pomona blog had a nice writeup on the Pulitzer Fountain a couple of years back. You can read that here. Wikipedia offers a decent history here. More views of the fountain can be seen here.

Giuseppe’s is a quaint place just north of the Upland border that specializes in both Persian and Italian foods. This means you might exclaim during your meal: “Mama mia, that’s-a spicy kebab!”

I’d been wanting to try this restaurant for ages because of the novelty. My friends Tom and Ann, who are regulars, met me there for lunch on Wednesday. Two of us ordered koobideh kabobs and the third got the lasagna. (The takeout menu doesn’t have the lunch prices but the items were under $8.)

The kabobs and rice were hearty, the lasagna cheesy. Having baskets of pita bread and French bread on the same table was slightly surreal.

Our server had earlier brought out complimentary shirazi and yogurt salads. As we were finishing our entrees, she returned with complimentary filet mignon and veggie kabobs.

I quietly asked Tom and Ann: “Do you think we’re getting all this because you’re regulars or does she know what I do for a living?” Ann replied: “Well, I did say we were waiting for a newspaper columnist…”

Well, no matter why we got the free food, the kabobs were good, especially the flavorful filet mignon. We polished off about half when the server returned with complimentary baklava. No complaints there either.

The restaurant is in a small building, easy to miss, as you round the curve into San Antonio Heights proper. The restaurant interior is comfortable and well appointed, with a subtle Mediterranean influence — columns at the entryways, colorful mats under the glass tabletops, muted Middle Eastern art on the walls.

Why does Giuseppe’s have an Italian name but two different cuisines? The co-owner said her family, which is Iranian, took the pizza parlor over in 1997 (it was founded in the mid-’80s) and added the Middle Eastern items. Her husband used to own an Italian restaurant, however, and that part of the menu isn’t an afterthought.

Wonder if you can get falafel on your pizza?

* Update, March 2015: In the area one afternoon, I returned for lunch. I ordered the chicken breast kebab ($15), which comes with basmati rice. Delicious. My meal also included a basket of fresh pita bread, still hot. To my knowledge there are no restaurants above 16th in Upland unless you head to the Colonies. Giuseppe’s is out of the way (unless you live near it, of course) and a dignified spot for a quiet meal, at least at lunchtime — for all I know it gets raucous on a Saturday night. Other than the exterior photo, which is from 2009, as is the writeup above, the rest are from this 2015 visit. 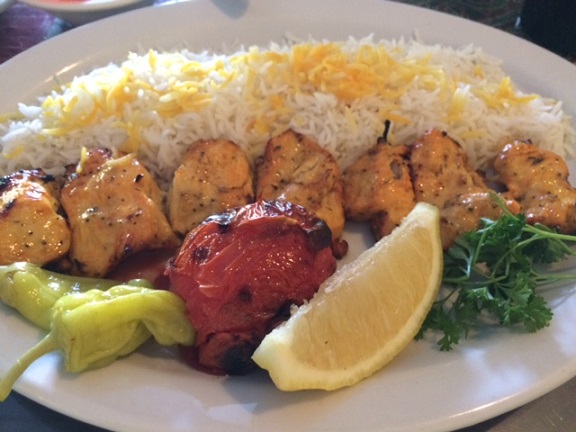 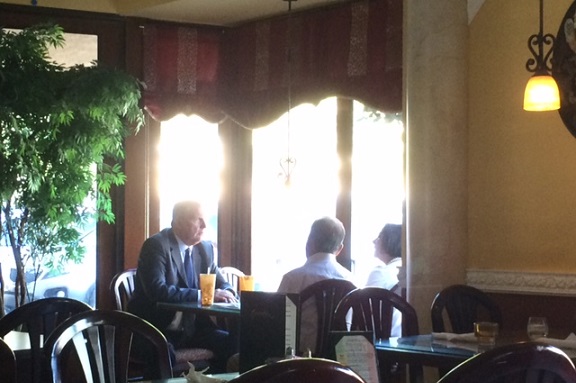 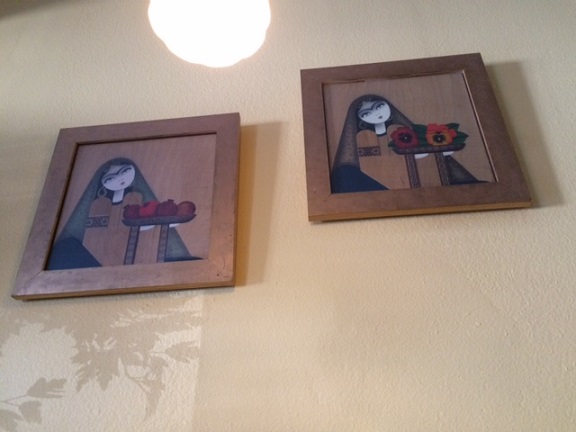 An oversized pastrami sandwich at Carnegie Deli in Manhattan…

…pizza at Grimaldi’s in Brooklyn…

…and a slice from Two Boots at Grand Central Station, placed on an MTA-themed tabletop in the food court.

Not pictured: a hot dog and papaya drink at Gray’s Papaya, a hot dog from a cart outside the Metropolitan Museum of Art, beef brisket at Junior’s, a tuna melt panini at Hot and Crusty, etc., etc.

Manhattan, as seen from Brooklyn.

What with one thing and another I’ve been too busy this week to say anything about my first-ever visit to NYC. And I don’t have much time now. But let me say this: It was awesome.

The above photo was taken on our first night after dinner at Grimaldi’s Pizzeria in Brooklyn, right under the bridge. An hour wait to get in. Neat neighborhood pizzeria, comparable to Casa Bianca in Eagle Rock in style and ambience, although the pizza was overrated — solid, but not the classic NY-style pizza one might have expected.

Good experience, though, and a block away, I took this shot.

More later this week, and probably next week, and in an upcoming column.

Forty-one years ago today (April 20, 1968), Robert F. Kennedy spoke to a luncheon crowd at Robbie’s in Pomona during his campaign for the Democratic nomination for president and from there went to ONT for a second speech, events I wrote a column about a year ago. (You can read the complete text by clicking the “Continue reading” link at the end of this entry.)

Since then I found a short video clip online of an RFK campaign appearance in Pomona. The curious thing is that the tree-filled backdrop didn’t seem to be along East Second Street, where Robbie’s was located. Did RFK stop at Fairplex or Cal Poly or…?

So that’s a mystery. Here’s a link to the Jeff Greenfield CBS report from May 2008. The video, alas, doesn’t seem to work anymore (I last watched it a couple of months ago), but you can try it yourself, or at least read Greenfield’s text story.

Greenfield, now a senior political correspondent, was a 24-year-old junior speechwriter for the campaign. Let me reprint the relevant portion from his story:

“There was also a lot of humor. Robert Kennedy had very little patience with the platitudes of politics, and he often mocked them — and himself. Listen to his explanation to the citizens of Pomona, Calif., why he won’t put on the oversize sombrero they gave him.

“The crowd implored him to try it on.

“Kennedy said: ‘I’ll say this, if I’m elected president of the United States with your help, the first day I’m in the White House, I’ll put the hat on.'”

These miniature versions of a half-dozen classic Inland Valley signs were done by artist Paul Knoll and are, or at least were, being displayed in a Pasadena storefront. See a short writeup here. Thanks to Chris Nichols for the link.

Can you identify them all?