I attended Sunday’s talk and slide show in Claremont by Robert Landau, who compiled “Rock ‘n’ Roll Billboards of the Sunset Strip” from photos he shot as a youngster, and since he’s going to give the same presentation in Rancho Cucamonga tonight, I figured I might as well write something about it. That’s in Friday’s column, followed by a few more items. 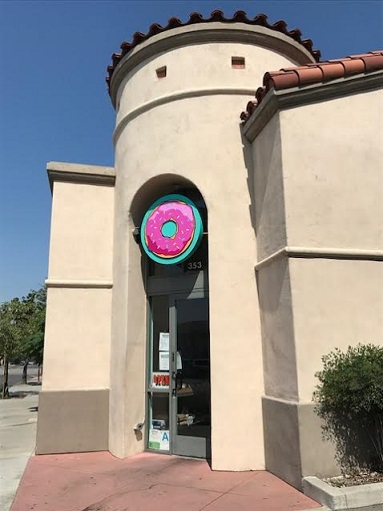 It’s the first place in the Village to sell fresh doughnuts (newspapers’ preferred spelling, btw) in this century. Grizzly’s opened in April and was an immediate hit, because: doughnuts. Also because: good doughnuts.

It’s from the team that brought us Pappas Artisanal in La Verne, one of the area’s better dining options. Grizzly’s sells small-batch doughnuts, about six styles per day, from $2 to $3.50, plus biscuit sandwiches from $7 to $9. They use choice ingredients, some of them locally sourced, like Chino eggs, and good for them. 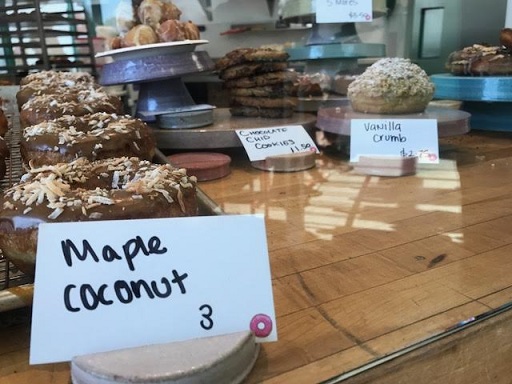 Doughnuts first: I’ve had the glazed, chocolate raised, vanilla crumb, raspberry Nutella, apple fritter and strawberry rhubarb fritter. They got off to a good start with me because the glazed was still warm. There is nothing like a warm doughnut, when the icing is still gooey. Grizzly’s doughnuts are less sweet than we’re used to, but they have more flavor. The only one of the above I wouldn’t get again is the vanilla crumb; the crumbs largely fell off onto the bag as I ate. 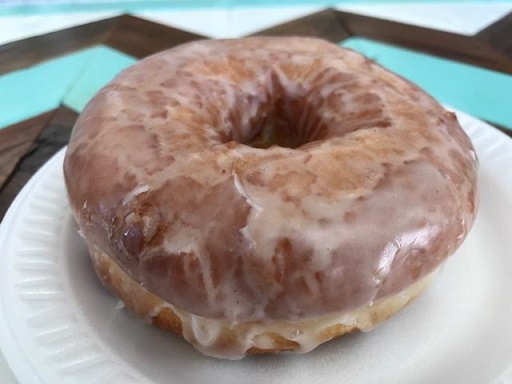 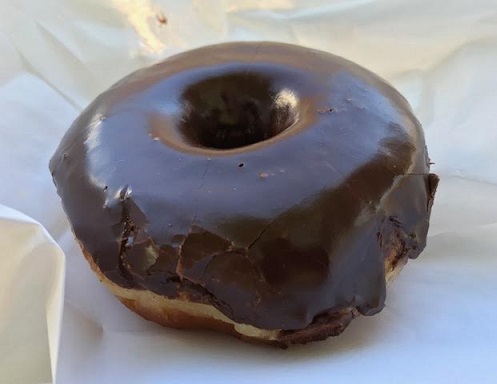 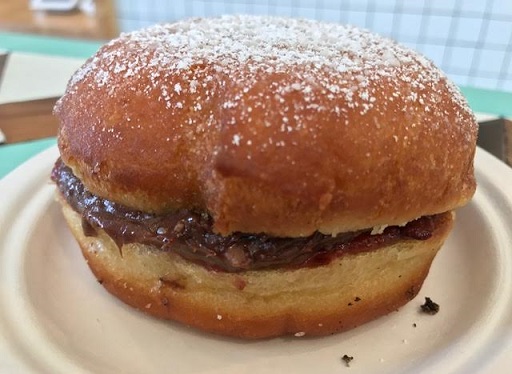 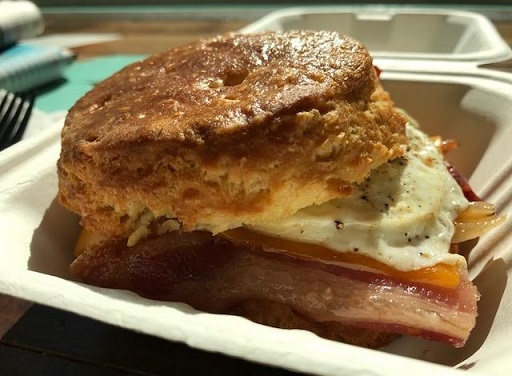 An editor here got the Le Monde (egg whites, mushrooms, roasted onions, spinach, swiss cheese, chickpea garlic sauce) and was both wowed and relieved our office isn’t next door.

That said, one Claremont loyalist put off by the pricing told me she’d rather get one of Some Crust’s famous egg sliders for a couple of bucks less, and if you just want a dozen doughnuts for the office, you might be better off going to Yum Yum for a wider variety at a cheaper price. (Or to Cake Among Us in Rancho Cucamonga.) But if you’re the foodie type, Grizzly’s is the best spot this side of Glendora’s Donut Man.

There’s limited seating. Also, you may find a line out the door, especially after my colleague Liset Marquez’s feature story on the business a few days ago, but don’t be deterred: Because the doughnuts are displayed right inside the door, any time there’s more than, say, three customers, one of them will be outside. Good marketing. 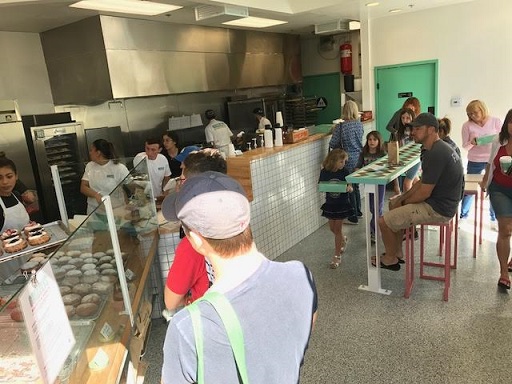 Rancho Cucamonga’s Rains House, built in 1860, almost fell to the wreckers in 1970. But then junior high teacher Maxine Strane stepped in, persuasively, and after a lot of effort, Rains House became a protected historic site. Strane’s memorial took place at Rains House on Saturday, attended by family, friends and former students. I write about it in Wednesday’s column. 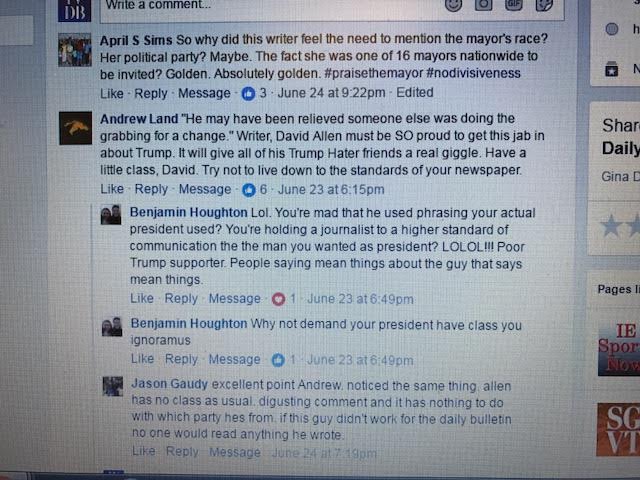 It’s been more than a year since my last Your Two Cents entry, in which a reader bashed me for saying I’m not an Eagles fan. Good times. But then not one, not two, but three readers on the Bulletin’s Facebook page criticized aspects of my column on the mayor of Fontana, Acquanetta Warren, meeting President Trump. Ohh, controversy (of a very mild sort, but still).

First, this part toward the end — “Warren, who’s African-American, is a Republican. She declined to say whether she’d voted for Trump, but she lamented how polarized the political environment has become” — got an objection from April Sims: “So why did this writer feel the need to mention the mayor’s race? Her political party? Maybe.”

Yes, actually. She’s a black woman mayor, interesting in itself, and a black woman Republican mayor, even more unusual. I imagine a lot of Republicans read that and thought with pride, “Neat.”

Then Andrew Land and Jason Gaudy both objected to another part. After the mayor grabbed a pad of paper from in front of the president, and he noticed and chuckled, I followed up with: “He may have been relieved someone else was doing the grabbing for a change.”

“Have a little class, David. Try not to live down to the standards of your newspaper,” Land wrote in part. Gaudy chimed in: “allen has no class as usual. disgusting comment and it has nothing to do with which party he’s from. if this guy didn’t work for the daily bulletin no one would read anything he wrote.”

I knew that line, tossed in as an afterthought, might rub a few people the wrong way, but I went ahead anyway. It was my lone joke at Trump’s expense, and it seemed to me one was OK. For some readers, even one was too many.

I’m a little surprised someone thinks I displayed “no class as usual” — is this a thing about me no one else is willing to say? — but I do have to agree that if I didn’t write for the Daily Bulletin that no one would read me. Because, well, if I weren’t published, where WOULD anyone read me?

Was anyone else bothered by my mention of the mayor’s race and political party, or by my “grabbing” joke? Or, now that it’s out there, by my lack of class? 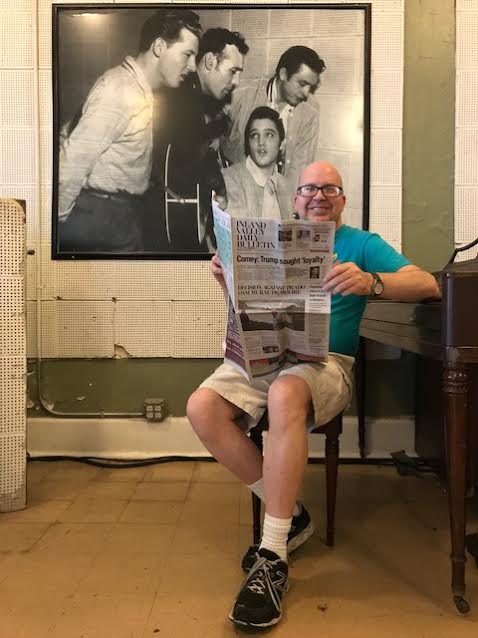 One newspaper, two venues: Above, I’m in Sun Studio in Memphis, Tennessee, the famed photo of the Million Dollar Quartet above and behind me; below, I’m in Chester, Illinois, birthplace of Popeye creator E.C. Segar, with one of the dozen character statues that dot the town, two murals visible in the background. If you can’t identify this figure as J. Wellington Wimpy, please eat your spinach.

I’m a big fan of Segar’s work and we happened to be passing through Chester, so this was a natural. The Popeye Museum next door had already closed, darn the luck. 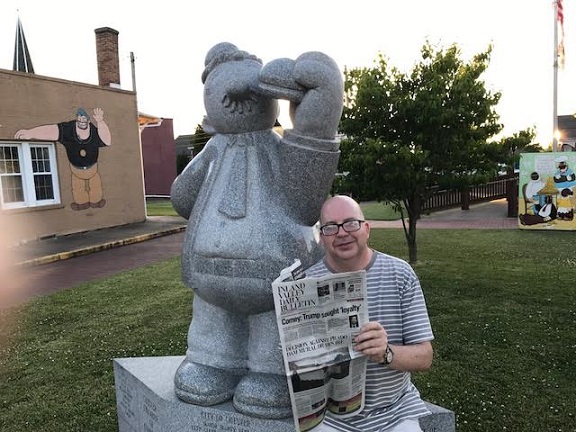 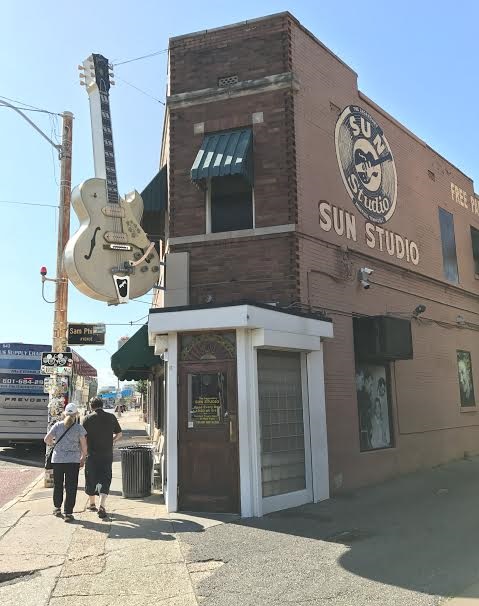 How was my vacation? Where did I go? It was my annual visit to St. Louis, but also something new: a road trip to Memphis. The latter is the subject of Sunday’s column. If you’ve ever been, or think you may go, feel free to chime in. Above, just like it says on the wall, Sun Studio in Memphis. 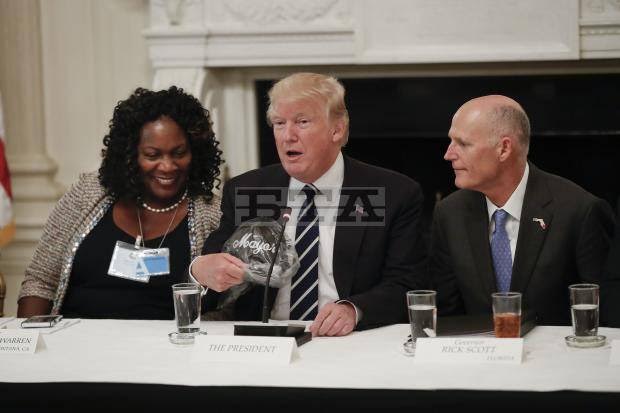 As reported the other day, the mayor of Fontana was seated next to President Trump at an infrastructure summit. How did that come about? Did they interact? I quizzed Acquanetta Warren on her close encounter and she did not disappoint. That makes up Friday’s column — along with an item of historical interest from Rancho Cucamonga.

Above, Trump holds up a cap that Warren gave him as Florida Gov. Rick Scott looks on. Below, Warren’s quick shot of the nameplates, soon-to-be-infamous notepad in the center. (The column explains why.) 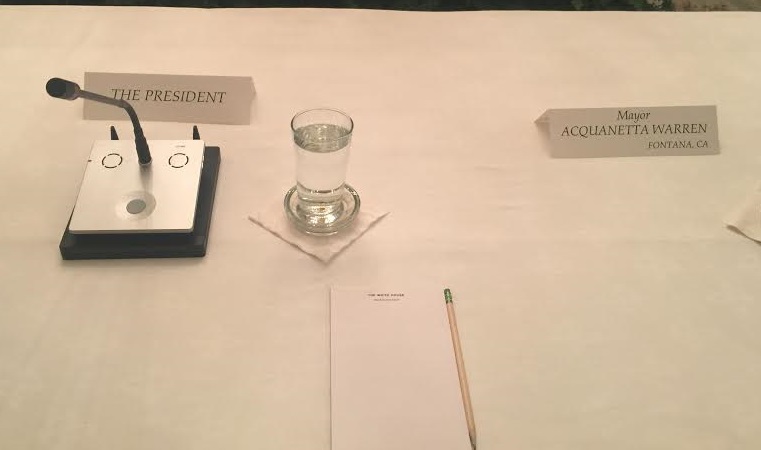 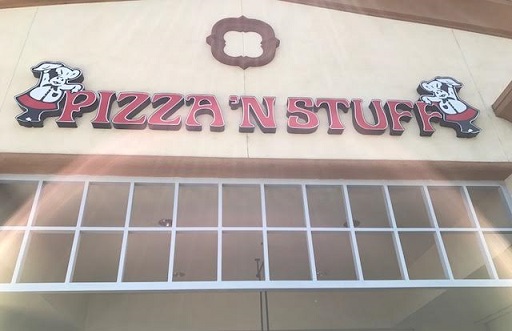 I was meeting a friend for lunch at the Vons center a few weeks ago, with a Mexican restaurant our destination. But then it turned out to be closed that day. So we went next door to Pizza ‘N Stuff instead.

I’d been there a couple of times, but it had been a few years, and might even have been before this blog started. In other words, having a chance to write about Pizza ‘N Stuff was a good fallback.

It’s been in business since 1977 — 40 years! — and under the same owners since 1982 — 35 years! Congratulations to them. Their menu has pizza, hot and cold sandwiches, salads and an array of pasta dishes. Don’t confuse them with Claremont’s similarly named Pizza n’ Such, although it’s easy to do. 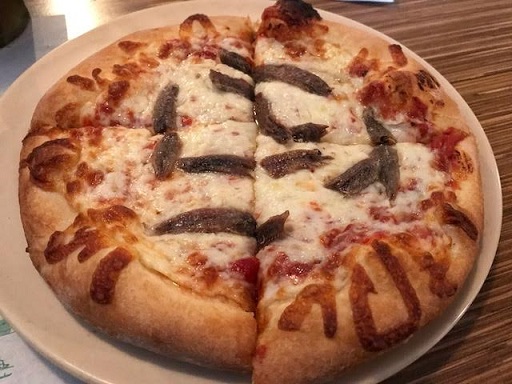 That lunch, I got a mini pizza with one topping (anchovies) and salad ($8.35). The pizza was cheesy, not bad, but not distinctive. My friend had an Italian beef sandwich ($6.35) plus a side salad ($4). He said the salad was “overdressed and overcheesed,” but he did like the sandwich, even if he’s had better. 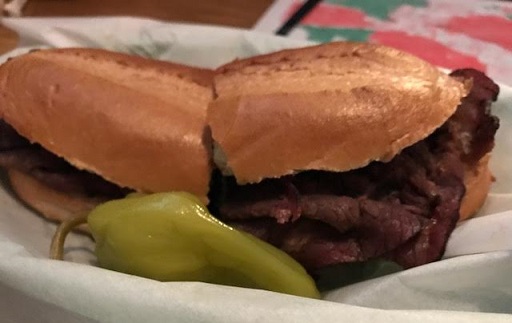 I felt like going back to try the pasta and made a point of going in for dinner one evening. I got the linguini with white clam sauce, a la carte with garlic bread ($12.75); as a dinner ($14.65) you would get soup or salad plus a dish of ice cream, but that was more than I wanted. The dish was generous with the clams and tasty. 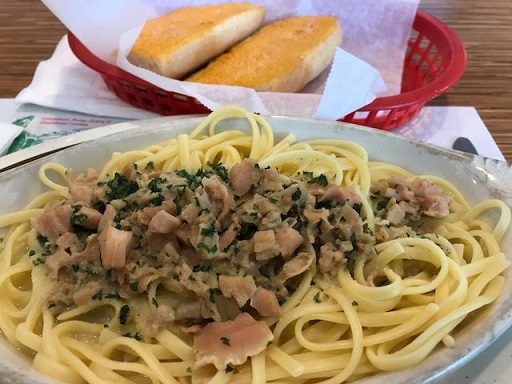 The seating is interesting. There are tables and booths that get a lot of natural light from the windows, but then there’s a warren of high-backed wooden booths that are fairly intimate, with dimmer lighting. Service was friendly on both visits, and the man at the cash register, probably one of the owners, had a nice touch with everyone, newcomers and longtime customers alike.

While I can’t say I was wowed by Pizza ‘N Stuff, it’s low-key and family-owned, I liked it well enough, and they’re obviously doing something right. 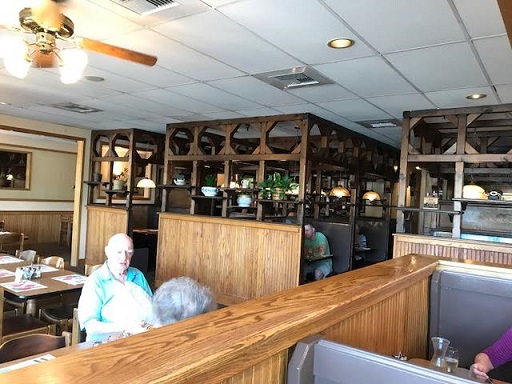 Back from vacation, I write about how I got home from ONT in unexpected fashion, and then relate an odd story from before vacation, in which a TV news crew entered a restaurant at which I was eating to report on a stolen tip jar. There’s a few short items after that. All the above is in Wednesday’s column.

I’m back at my desk — sob! — and reorienting myself. At least I remembered all my computer log-ins, a good sign. Over the weekend I caught up on all my newspapers, another part of the reorientation process. First off I’ll write a Restaurant of the Week for Thursday, to ease back in, and then after lunch will start on Wednesday’s column. My vacation, or at least the portion in Memphis, will probably end up as a column soon. But, in short, it went well.