I get a sneak peek of Rhino Records’ new location in Montclair, to which the store is moving after 48 years in Claremont. It’s got a very different, more modern feel, but a lot of familiar faces, and it’s larger. I write about the move in my Sunday column.

First Candlelight Pavilion, now Center Stage Theater. Fontana City Hall is closing its city-owned theater for a renovation and a new focus on live music. That’s a positive, unless you’re a fan of dinner theater. The last show is Aug. 14. “All good things come to an end,” longtime operator says. I write about the impending change in my Friday column.

Cal Poly Pomona’s CLA tower is in mid-demolition. We had a news article about it last spring, but now I take a whack at it (much like a wrecking ball?) in my Wednesday column. Gee, a Pomona column. Just like the old days. 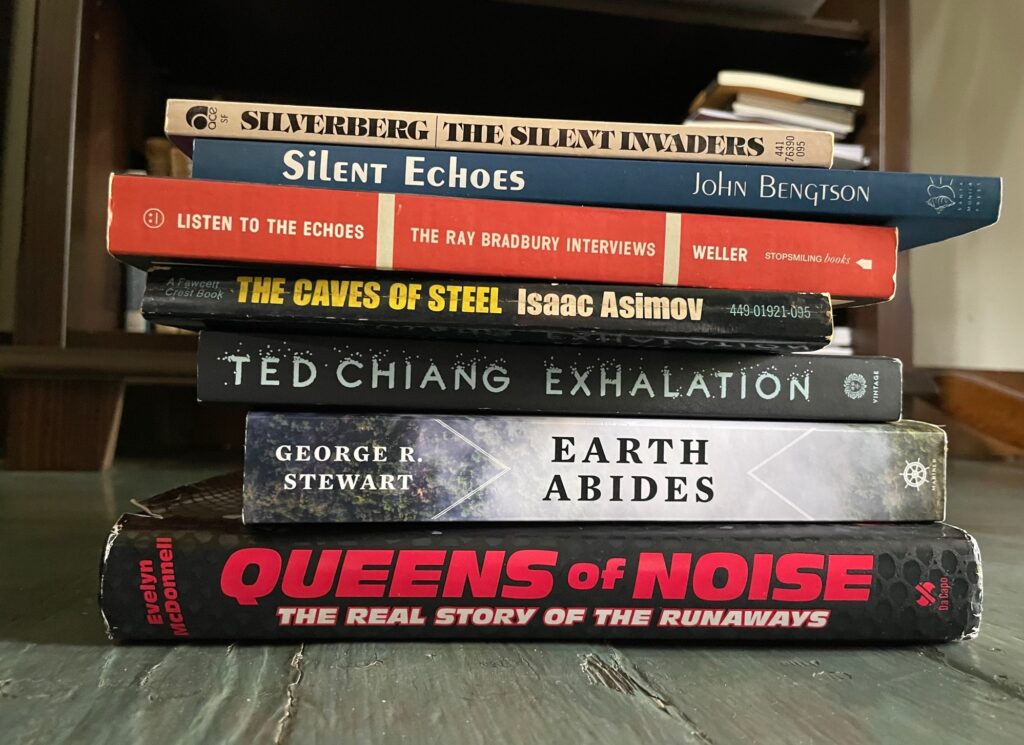 June’s books all have titles involving silence, quietude or sound. This takes on a different resonance (so to speak) after three-plus weeks of silence here on the ol’ blog. Technical difficulties. I was unable to get into the blog to post anything. All I got were error messages. That’s resolved, at least for now.

Let me write a somewhat hasty version of this monthly post. I actually had to go back to May’s Reading Log, posted May 31, or almost two months ago, to remind myself of where the bold type goes.

Silent Invaders (1963): A spy from one warring alien race pretends to switch sides to the enemy, before realizing he’s been blinded by his world’s propaganda and that he really IS on the wrong side. But can he turn traitor? A fun romp, probably bashed out quickly, but there’s no shame in that. (Bought this used in 2016 at St. Louis’ Patten Books, RIP.)

Silent Echoes (2000): The first of Bengtson’s remarkable books in which he identifies precise locations in a silent film comic’s work based on background details, finds historic photos or maps to make his case, and visits the sites today. A surprising number are still around today, or at least as of 2000. A neat way to link Hollywood’s reel and real history. (Bought this in 2008 at LA’s Hammer Museum gift shop.)

Listen to the Echoes (2010): Bradbury answers questions on his life and on cultural matters. These late-in-life interviews in his 80s are better than expected (and not so different from the unpublished 1976 interview included as an appendix). A tolerance for RB’s trademark enthusiasm is required. It’s a nice read for fans like myself, even if I wish Weller had challenged him more on such topics as politics, technology or the limits of nostalgia. (Bought this after the Bradbury/Weller talk in Pomona in 2010, which was among Ray’s last appearances, if not his last,. Both men signed my copy.)

Caves (1954): A well realized vision of the future and a successful try at a genre within a genre, a murder mystery in an SF setting. And the detective grows and changes over the course of the novel. Downsides: Dense wads of exposition, and the Biblical history lesson delivered by the detective to his wife about her name, Jezebel, is absurd. (Bought in 2008 from Ventura’s Ralph’s Comics Corner but listened to the audiobook.)

Exhalation (2019): Deeply thoughtful stories, many involving technology and what seem like credible advances, such as personal, 24/7 body-worn cameras, and what they might mean to individuals. “The Merchant and the Alchemist’s Gate,” about a limited form of time travel, may be the most human story of the lot. Overall, exceedingly well crafted, although I would prefer more drama and tension. (Bought in 2021 at B&N, Montclair, with a birthday gift card.)

Earth Abides (1949): An airborne disease wipes out all of humanity other than isolated individuals. Stewart plays this not for drama or conflict. He’s more interested in how the remnants of civilization (waterworks, electricity, roads) slowly erode, how nature reclaims the world and what skills one thinker might best pass on to those who follow. A beautiful novel, written in 1949 and more timely than ever. (A friend gifted me his copy in 2010; in June, finally getting to it, I was 100 pages in when someone walked off with my copy ((!)). Tsk, tsk. Civilization really IS eroding. So I bought a fresh copy at B&N Montclair, days before vacation, and picked up where I left off.)

Queens of Noise (2013): Going into this, I knew next to nothing about the Runaways, the 1970s rock band that included Joan Jett and the song “Cherry Bomb.” But McDonnell made me care. A loving testament to a minor but influential all-girl band, one whose power has only grown in the decades since their breakup. (Was given this for my birthday this year.)

These books were all good, with “Earth Abides” and “Exhalation” my two favorites. Both are a little slow (some visigoths on Goodreads find “Abides” very boring), but we are not slaves to sensation here on the Reading Log, are we? (Er, are we?)

What did you read during June? Do you even remember? Well, piece it together as best you can in the comments section. History demands it.

Next month: …is right around the corner. 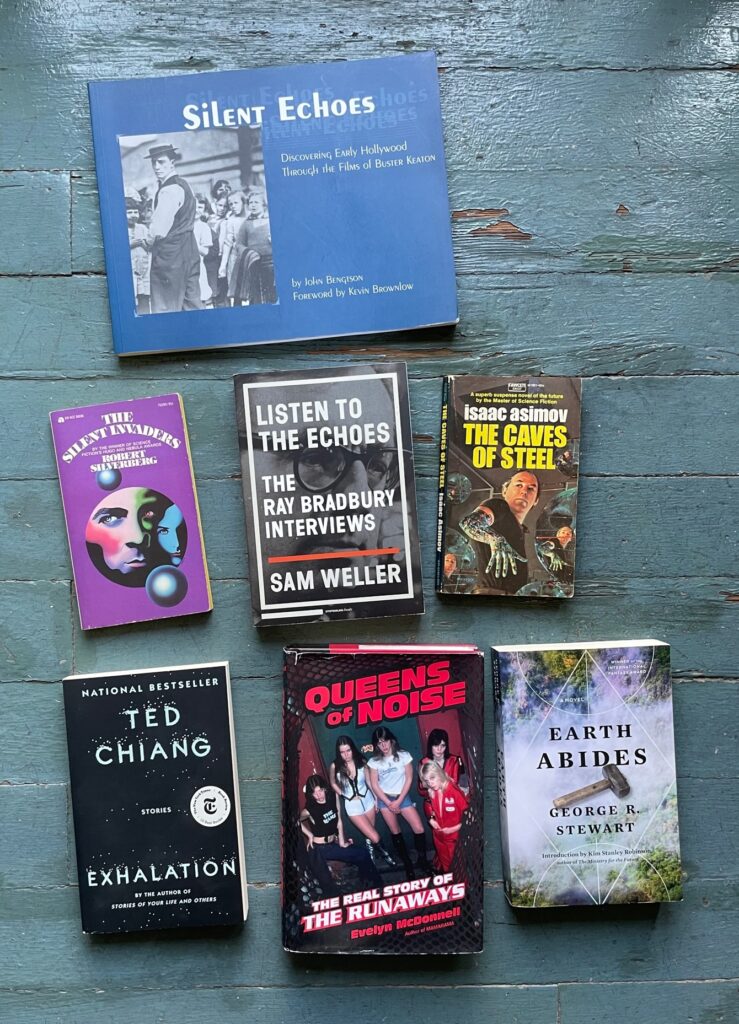 With my blog access back, there’s the question of how, or whether, to post links for all my columns going back to July 3 that were missing. Is anyone really looking for them at this point? Well, maybe Sunday’s. I don’t have the heart to write nine individual posts. Yet for the record, I’d like the links on the blog.

So, let me gang all the absent column links together here in one post. Here you go.

July 3: 75 years of love and jokes for Corona couple

July 8: ‘Peanuts’ strips about Riverside were no flight of fancy

July 10: A scene from Upland is seen in Illinois

July 15: After wild trip from China with dog in tow, couple settles in Upland

July 17: ‘Catacombs’ at Mission Inn are stuff of Riverside legend

July 20: Tunnel to ONT may move forward without Elon Musk

A busy month, eh? I mean, it’s my usual three per week, but it takes on a different cast when 10 columns are placed side by side.

Are any of you still accessing my columns via this blog? I assume it’s useful for some of you. You can also get to them via my columnist page on our sites, such as the IVDB: https://www.dailybulletin.com/tag/david-allen-column/

Thank you for reading.

I came back from vacation July 3, tried to get into this blog to write a Reading Log and post a column link, and got…an error message. The inner workings of the blog could not be accessed. Frustrating, because, by virtue of the blog being down, there was no way to explain here that the blog was down rather than forgotten.

Someone in far-flung Denver was supposedly going to look into it. Nada. Got the same error message for three weeks, including Friday morning. A few hours later, suddenly I could get in.

Access restored, I will catch up on column posts, write a Reading Log and hope that the problem is behind us, at least for a while.