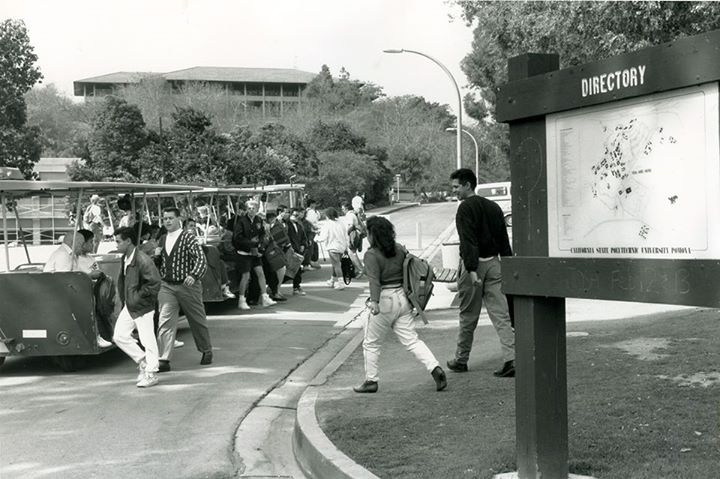 Cal Poly Pomona’s Facebook page posted this circa 1990 image of the campus tram, which operated from 1975 to 2003 and was known as the Polywagen and the Poly Trolley, along with this witty caption:

“Twenty-five years ago, students could be seen walking around campus in strangely patterned grandpa cardigans and high-waisted jeans. Seems like not much has changed. Except the tram. RIP, tram.”

The post has more than 1,000 likes and many comments from alumni. Among them:

Melissa Oldenburg: “I miss the tram. I remember how the exhaust fumes kept me warm on chilly mornings when I sat directly behind its exhaust vent.”

Michael Nguyen: “I miss running and jumping on the tram. That was a fun memory.”

Laura Gomez Alvarado: “I miss getting soaked on rainy days.”

Micheal Fro Fro Huluf: “If CPP brings the trams back, that will be awesome.”

To which the university replied: “You say that, but you might not like it if it were raining when you tried to ride it. But who are we kidding? It doesn’t rain here anymore.”

(Whoever is in charge of this FB page deserves a pat on the back.)

Cal Poly now uses the name Poly Trolley for a lunch wagon and, rather than an open-air tram, uses buses, called the Bronco Shuttle, to ferry students, faculty and staff from parking lots to campus buildings on the commuter campus.

Sunday’s column previews my annual film series at the Ontario City Library. This time I’m showing four classics with little in common other than the production designer, Henry Bumstead — and their own greatness, of course. Bumstead was born and raised in Ontario. Hope some of you will consider coming out for the movies, which screen for free each Thursday in April at 6:30 p.m. 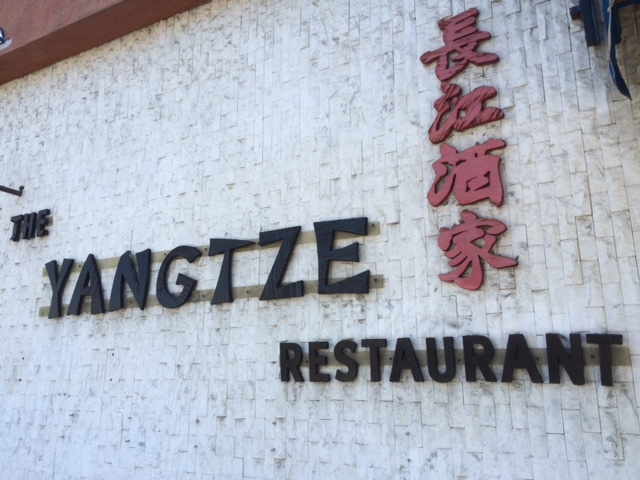 An Ontario landmark is closing on Tuesday. Friday’s column has the story. A 2011 blog post features a copy of an original menu.

Above, the stylish exterior sign on Euclid Avenue. Below, two views of the dining room. At bottom, Christie Priest and her daughter Darlene enjoy a last lunch on Wednesday. 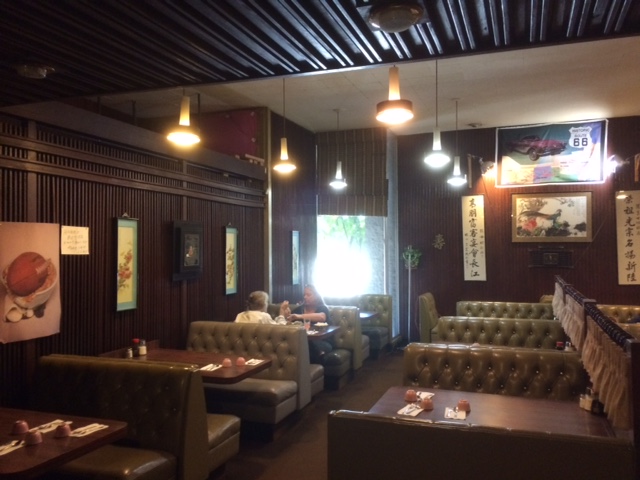 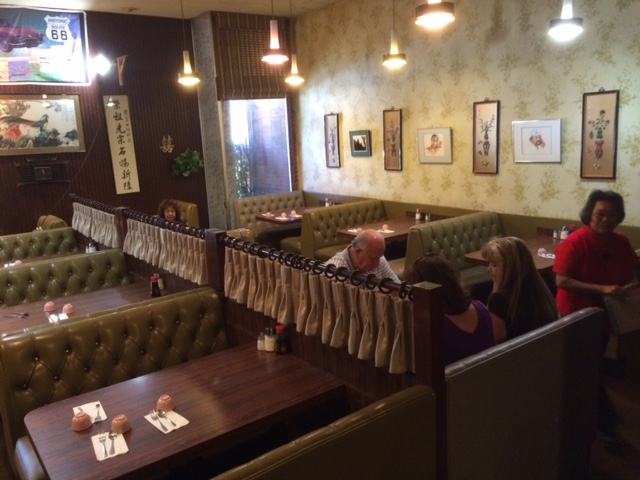 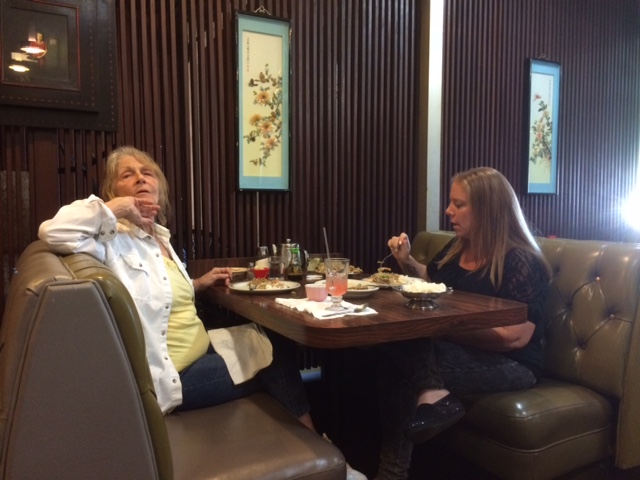 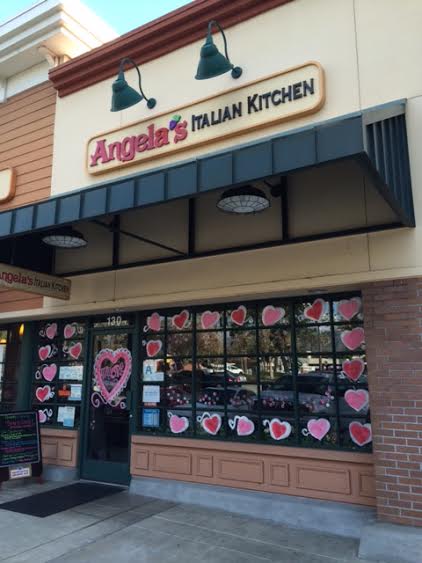 Looking for somewhere to eat in San Dimas, I found Angela’s on Yelp and invited a friend to meet me for lunch. It’s on the main drag, only a block east of another Italian spot, Pozzetto, where he and I ate last year. Angela’s is in the Albertsons center, toward the west end.

It’s so small, your first sight as you walk in is the door to the women’s room. But after that, they’ve managed to make the dining room feel cozy, not small. The dark wainscoting and tan paint help, as do the plethora of decorations, which include many Sinatra posters.

Rather than salad, we each ordered Italian wedding soup as our side (pictured below); full of pasta, spinach and meatballs, it was very good. We each got pastas: pasta carbonara (“good consistency and flavor,” my friend opined; pictured second) and baked mostaccioli (maybe too much cheese, but good; pictured third); each was $16. I took home half of mine and got a second meal out of it.

Did we like Angela’s or Pozzetto better? Based on one meal at each, it’s Pozzetto by a nose, and note too that Pozzetto is larger and has a wine bar. But there’s nothing wrong with Angela’s. 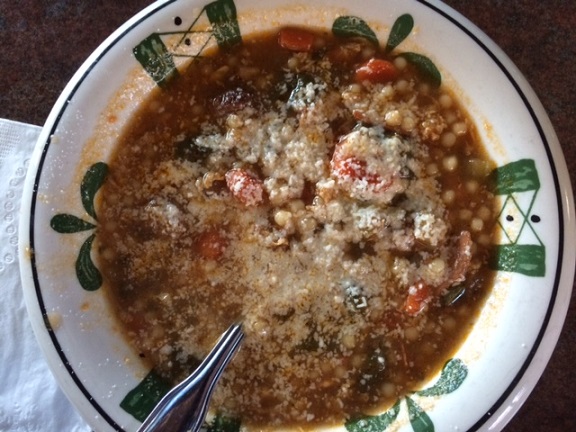 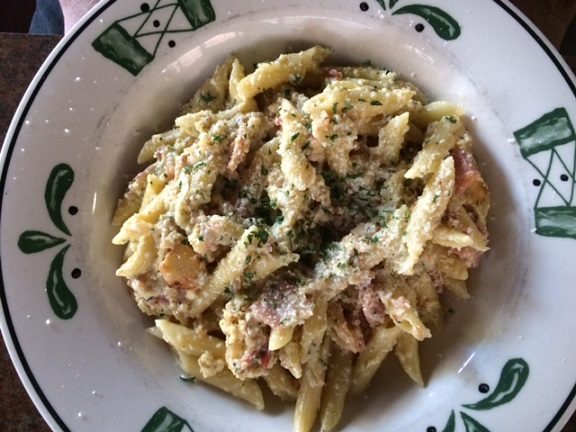 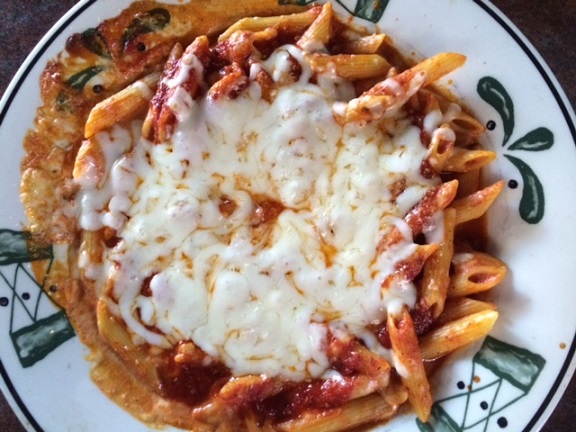 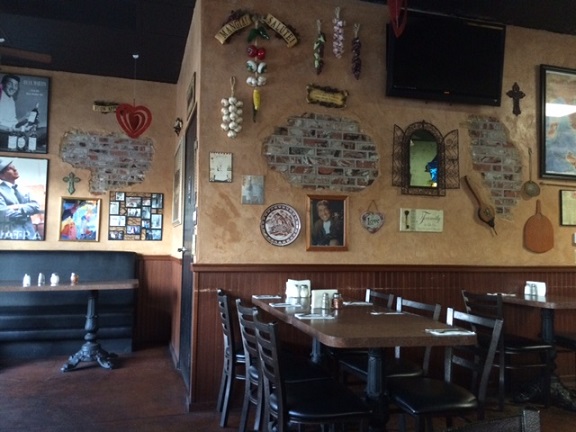 It’s edgier than usual, for good or bad, but Wednesday’s column is the result of a leaked document about an Ontario employee disciplined for ethical lapses, twice. That didn’t stop him from getting a 5.2 percent raise. 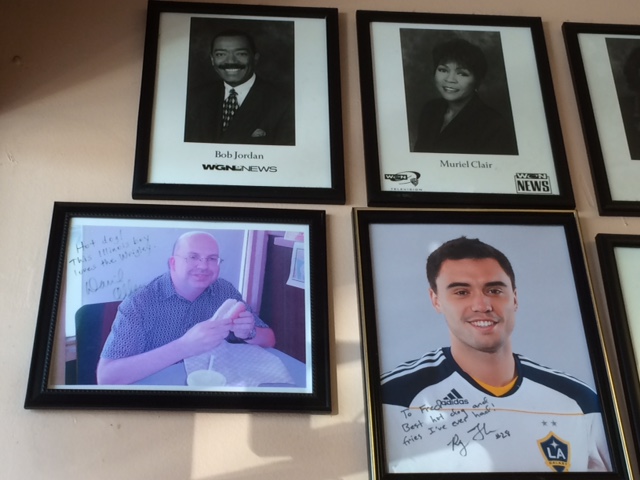 On a visit to Windy C’s Chicago Hot Dogs in Upland last year, owner Freddy Johnson insisted on taking my photo and adding it to his wall of celebrities, many of them Chicago-based. He printed out the photo and had me sign it on the spot.

Faced with a photo of myself that would be framed on a wall for all to see for some time to come, I was put in mind of the “Seinfeld” episode in which a coffee shop waitress asked Jerry to sign a photo of himself and he wrote “Nothing could be finer than eating in your diner”; after Elaine mocked him, he tried to grab the photo back. With trepidation, I wrote “Hot dog! This Illinois boy loves the Wrigley,” the name of the menu item I was eating: a dog with sauerkraut and cheese (pictured below).

I returned for lunch recently, the first time since the photo. Eyeballing the inscription, I didn’t feel the urge to grab it back or hide my head. But then, Elaine wasn’t there to shame me.

(My Restaurant of the Week post from 2011 on Windy C’s has particularly entertaining comments, by the way.) 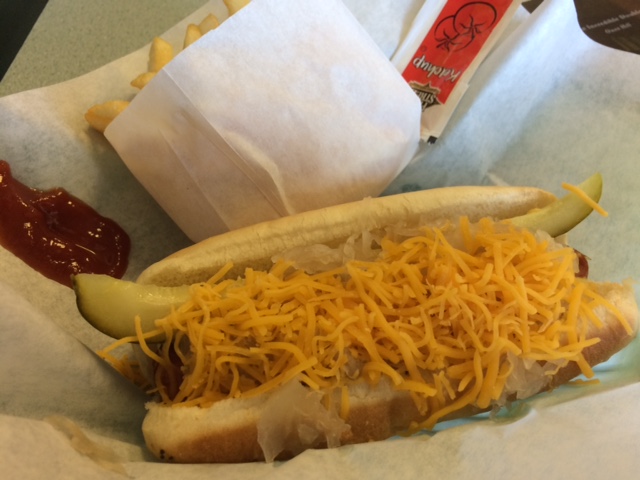 Sunday’s column is mostly about Beth Page, a volunteer active in Pomona from the 1940s until her recent death at 103. Also: cultural notes, a plug for this blog and an Inland Valley motorcycle chase that made news in LA, NYC and the UK.

About Beth, I knew her a little and interviewed her once, making a tribute item a natural. A photographer searched our archives for photos of her and came up with one, which looked familiar to me. Evidently I took it myself to accompany my December 2006 column on her, but it didn’t run with the column, probably for space reasons. It was satisfying to get it into print and online this time. It only took eight years.

A documentary, “Design for Modern Living: Millard Sheets and the Claremont Art Community 1935-1975,” has its world premiere Sunday in Claremont (where else?). Friday’s column gives the details on that and a quick primer on the theme. Also, there are two cultural notes, and an item about an Ontario walking tour Saturday. I’ll be there selling my book. 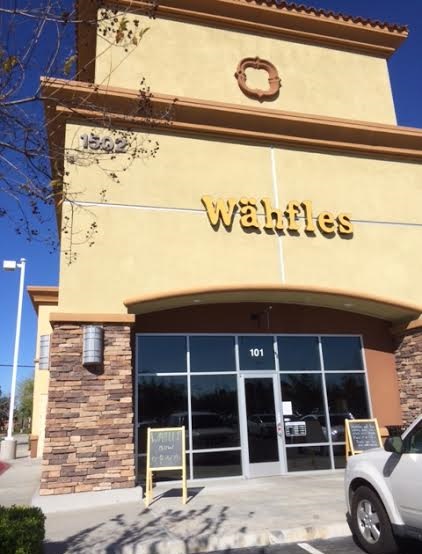 My colleague Pete Marshall alerted me to the existence of Wahfles, a dessert and coffee house in La Verne, which opened in February. It turns out the original opened a year ago in Chino Hills. It’s a mom-and-pop. One recent morning I ventured to the La Verne location, which is in the Vons center, for breakfast.

Well, it’s not really a breakfast spot. (It’s no Waffle House.) They have some lunch waffle sandwiches and dessert waffles. Other than a coffee bar, the only thing that works for breakfast is one waffle. I had that: the Breakfast Sammy ($4.45), with ham, Swiss, fried egg, mayo and honey mustard. It was cut in half and could be eaten like a sandwich. And was. Very good.

I liked the vibe of the place: dark wood tables, rugs, some leather chairs, a sofa, a coffee table, magazines to read and locally produced art on the walls. So I returned one afternoon for a dessert waffle, the kind that make up the rest of the menu.

Mine had speculoos (described as “cookie butter” — what’s not to like?), bananas, ice cream, whipped cream and cinnamon sugar ($4.45 for a half, $5.95 for a full; I got the half). Delicious. Rather than get a fancy beverage, I cheaped out with a free water from a dispenser on the counter.

Wahfles (there’s an umlaut over the “a,” incidentally) is a neat addition to the area. Their website has a menu. 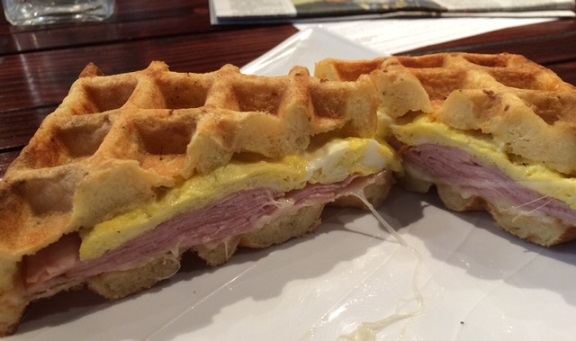 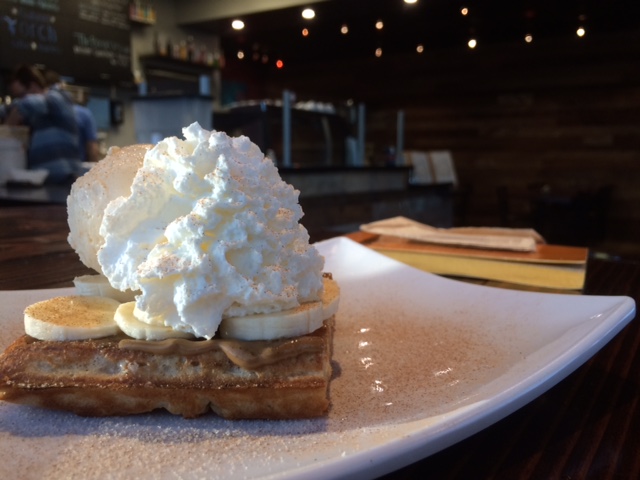 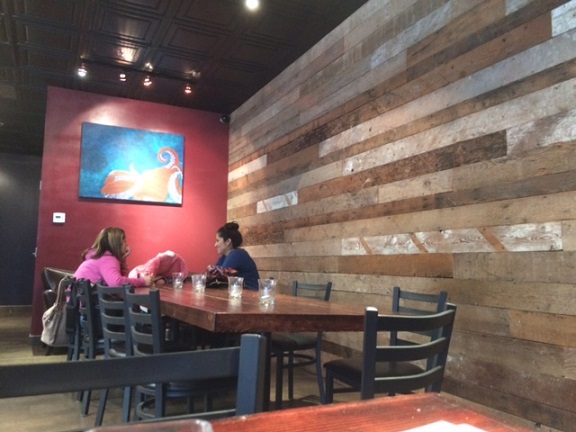 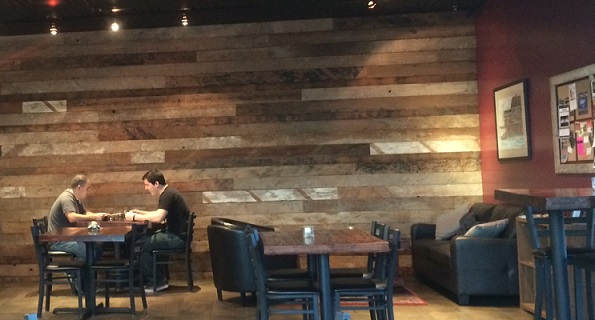 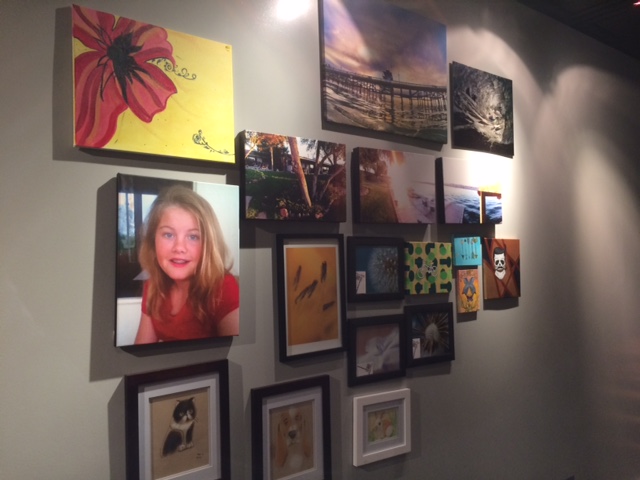 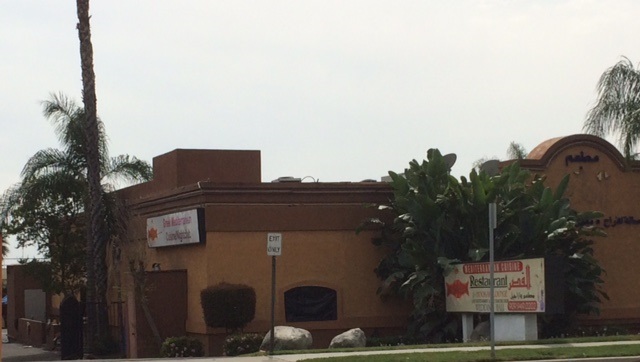 A hookah bar at 1276 W. Seventh St. in Upland is the latest site for a makeover by the “Bar Rescue” reality-TV series. The Palace, which has had several names over the years, is undergoing its “stress test” tonight (Wednesday) before closing under its current look. After the show’s usual blitz remodel, the new look will be unveiled Saturday.

It was just Sunday that the episode aired about Pomona’s Friar Tuck’s, now Stein Haus. But that one was taped last December. Nice to have them back in the 909, and so soon.