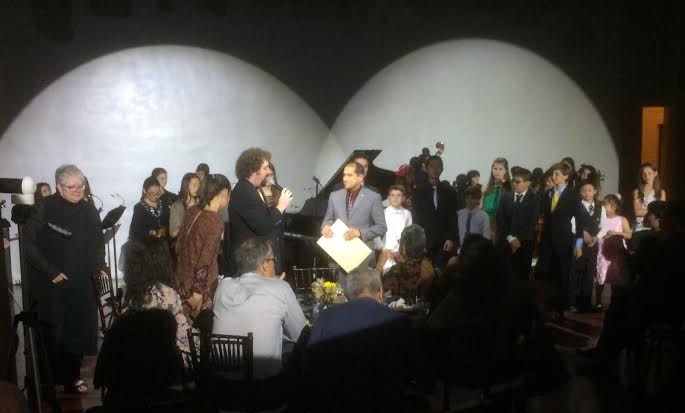 Sunday’s column starts with an item about punning business names and continues with news nuggets from Chino and about Pomona.

Friday’s column begins with a tidbit about the Cos, a week after the CSU system rescinded his Cal Poly Pomona honorary doctorate: He also filmed parts of an “I Spy” reunion movie on the campus. After that, six items round out the column.

By the way, the Cosby factoid is one I’d come across maybe a year ago while doing some research on Cal Poly’s 75th anniversary. The hyperlink in the column will take you to the website I got the trivia from. I hadn’t figured out what to do with it in all this time, the fact being rather random. Suddenly, the perfect excuse arose to use it.

Wednesday’s column tells some of the history of Rancho Cucamonga as I interview the author of a new book on California wine history.

“It’s amazing to think there were 34,000 acres of grapes here after World War II,” Dinkelspiel said. “This was the largest grape-growing region in the United States. Now there are just a few hundred acres, if that.” 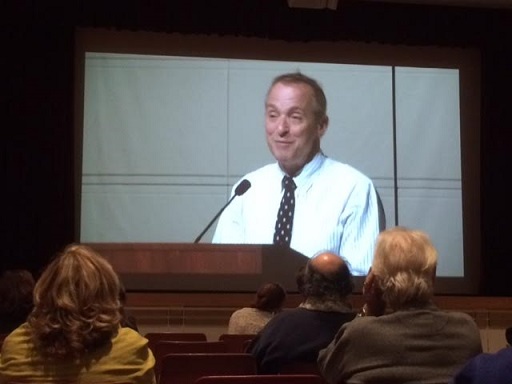 Sunday’s column reports on humorist David Sedaris’ Thursday night reading in Claremont, which I attended. I had expected only to write an item on it, but he ended up being the whole column. He’s pretty funny, so that’s right in my wheelhouse. Above, a photo of the video feed in the overflow room, where some 60 of us watched. It didn’t feel like a situation where one needed to applaud, since Sedaris wasn’t there to hear it, but people clapped at times anyway in appreciation.

I attended a cultural event in LA on Monday, a public talk by Patti Smith, the rocker, interviewed onstage by Jonathan Lethem. I don’t know if he and I were the only two people from Claremont there, but we may have been. That leads off my Friday column. After that: three Valley Vignette items and two Culture Corner items — one of them about Shakespeare, two of whose plays are being performed locally this weekend. 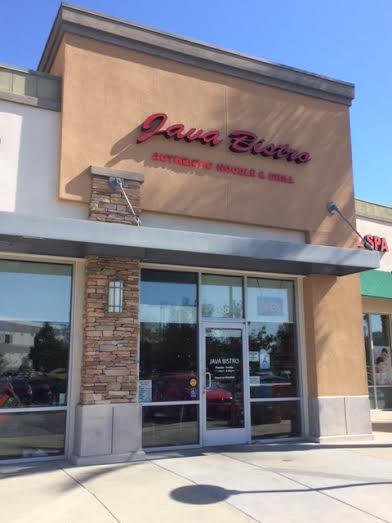 Did you know there’s an Indonesian restaurant in Rancho Cucamonga? It might be the only one in the Inland Valley. Java Bistro opened in February in a small complex that also has Gandolfo’s Deli. Reader Andy Sze drew my attention to Java Bistro’s existence.

It’s a small operation with only a few tables, plus a wall of grocery items on shelves, such as rice, dried shrimp and spices. The other wall has a photo mural of Indonesian scenes, very professionally done. (It was hard to get a photo of the dining room unobtrusively because it’s so small.) 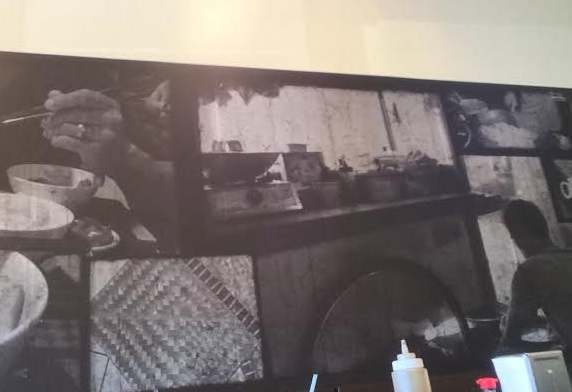 The staff will show you to a table and hand you a glossy menu, which has photos of many of the dishes.

On my first visit, I tried the anchovy fried rice ($9), because I like anchovies. The dish had the saltiness you expect from anchovies, as well as having sator, an edamame-like bean. I took about one-third home for a second meal. I wish I had ordered a second dish for contrast because this one by itself kind of wore out its welcome. 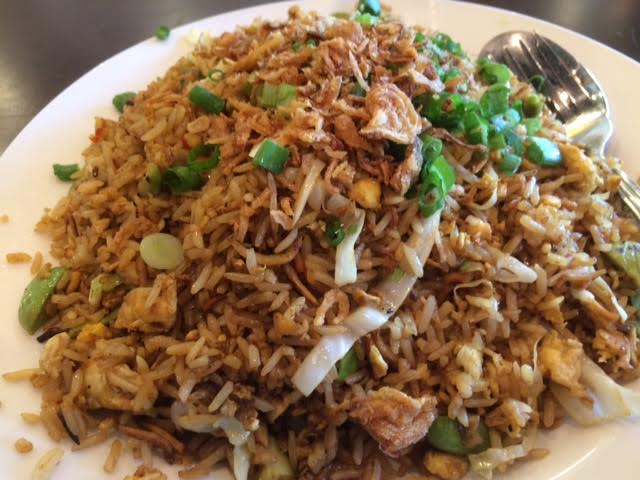 On my second visit, I got mie ayam jamur, or chicken mushroom noodle ($7.50). This was a bowl of noodles with the aforementioned chicken and mushrooms, plus vegetables, and was delicious. A cup of soup — meatballs in broth — came as a side. 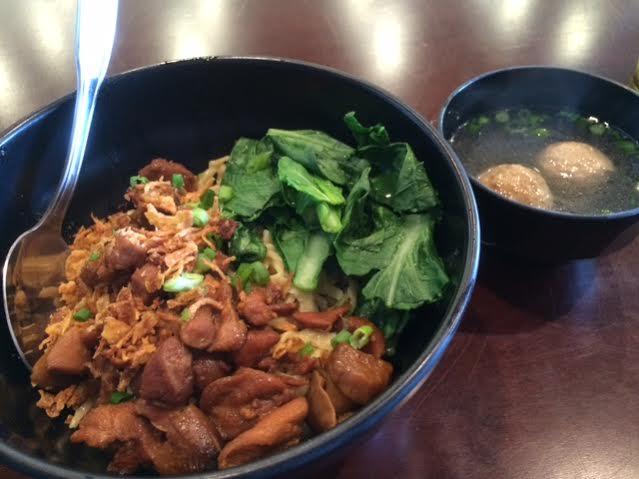 Java Bistro is a good spot for the slightly adventurous. I like it and hope they succeed. 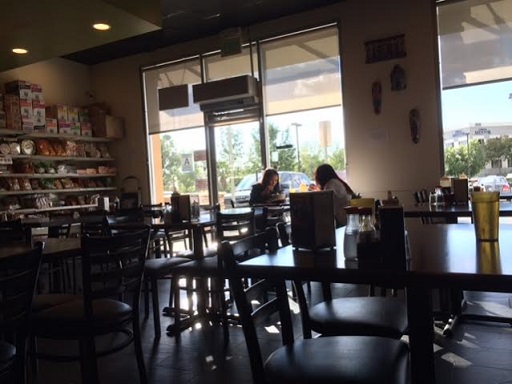 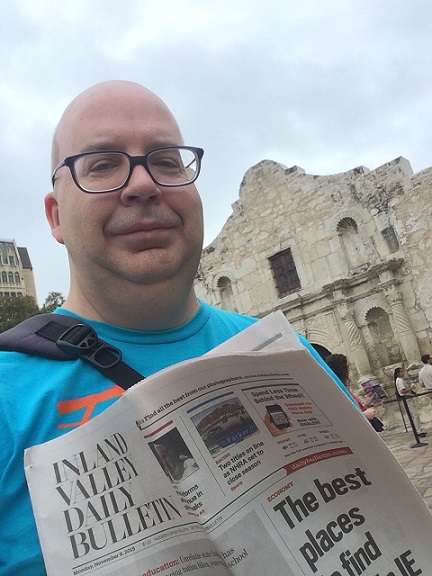 Two views of San Antonio, blocked by your blogger and a Daily Bulletin. It’s hard to take a selfie that gets a newspaper into the frame, but I did my best! Above, I’m at the Alamo; below, along the River Walk. I wore my Franklin BBQ T-shirt from my Austin vacation for some Texas flavor. 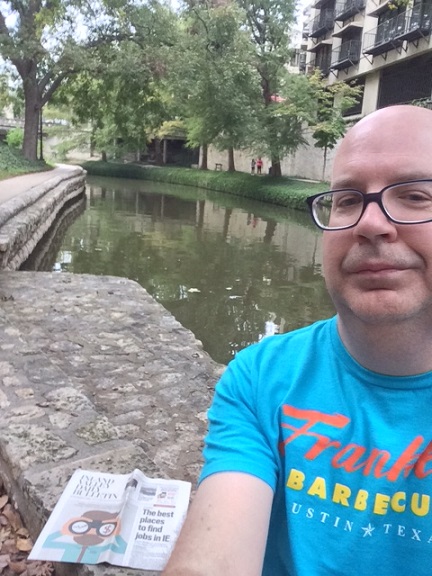 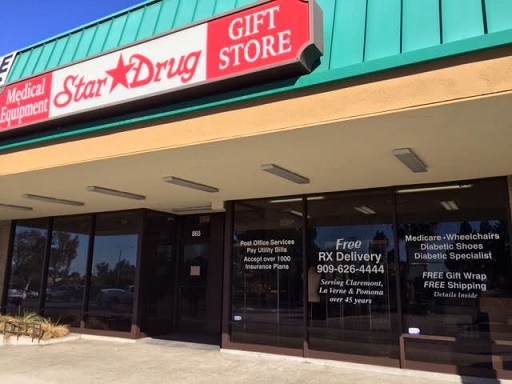 Star Drug, one of the area’s few remaining independent pharmacies, is closing Thursday. It’s been in Claremont since 2012 and prior to that in Pomona since 1986. My Wednesday column is about Star Drug and pharmacist-owner Richard Sullivan, who’s been working locally since 1967. If you know the pharmacy or him, your comments are encouraged.

Wednesday’s column starts with the news that humorist David Sedaris will speak Nov. 19 in Claremont. (His book “Me Talk Pretty One Day” is referenced in the headline.) After that: four Ontario items and two cultural items. And a note that I’m on vacation this week. Columns and regular posting here will resume next week.