My annual countdown of the strangest local news stories of the year appears in my Wednesday column.

How do I come up with them? I clip and save stories from the Bulletin, and occasionally other papers, throughout the year in a folder labeled “Weird stories of [year],” then sift through them in late December. There were 29 stories in all, some of them from my columns — although none of the 10 selections ended up being anything I’d written about. My choices and the rankings are somewhat random, but if the stories got a lot of attention, they move up in the countdown.

On Christmas Eve, KPCC-FM’s Patt Morrison interviewed me, the artist and the pastor about the Claremont United Methodist Church’s decision not to install a Nativity this year that would have commented on gun violence. This had been the subject of my column the previous day. You can listen to the segment here. It was a small thrill being quizzed by Morrison, and the segment (17 minutes long) was generous in letting people talk. I’m in it twice, starting about halfway through. 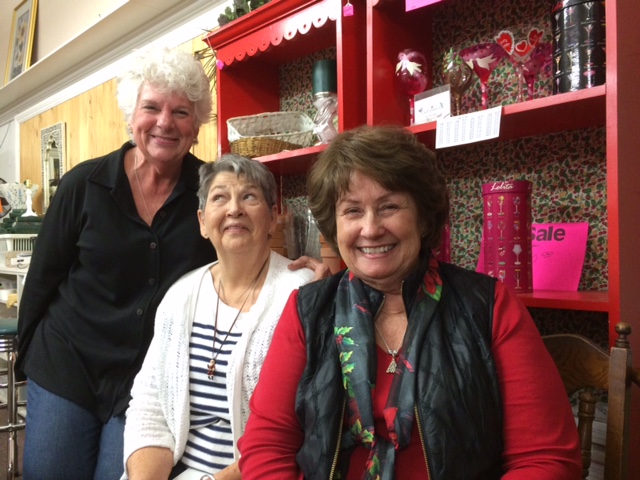 Sunday’s column is about Upland’s The Sideboard, a fixture of downtown Upland since the Reagan years but which recently closed for good. Above, from left, owners Evelyn Stauffer, Claire Cushing and Judi Matlock.

Rather than a heartwarming Christmas Day column, I went in a consumerist direction to write about my gift to myself: my first new TV of the 21st century. Read that here, and chuckle. Merry Christmas!

A UC Irvine professor of physics and astronomy, Michael Dennin, makes a compelling case for Santa having superheroic powers, such as the ability to bend space and time and shift shape to slide down chimneys. But Dennin admits Santa doesn’t have any arch-foes. Does the Grinch count? Thanks to Roy Rivenburg for the video.

Remember the controversial Nativity scenes at a Claremont church in recent years, the subject of columns here the past two years? This year’s didn’t happen, a fate that became the subject of my Wednesday column — with a rendering of the startling scene the artist proposed. I can see the pastor’s point as well as the artist’s. Where do your sympathies lie? 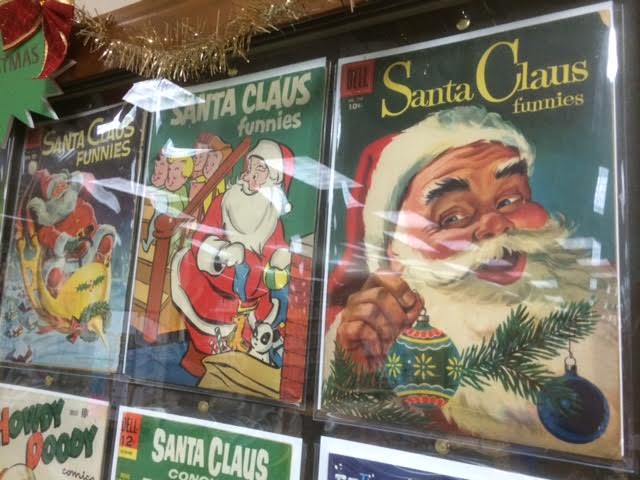 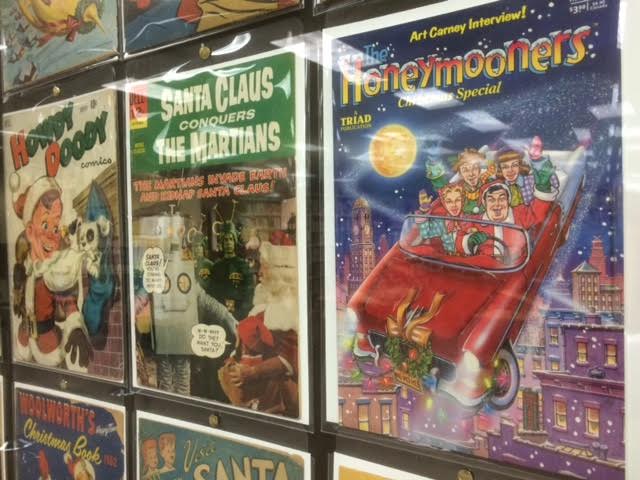 Christmas-themed comic book covers are the theme of a display at the Pomona Public Library, all from the collection of John Atwater of Rancho Cucamonga, whose extensive holdings have also been shown at the L.A. County Fair and the Cooper Museum in Upland. Pardon the glare, but the comics are bagged and under glass. If you’d like to see the display in person, they’re set to be there through January. The library’s hours are 1 to 7 p.m. Monday to Thursday and noon to 5 p.m. Saturday — but it’s closed Christmas Eve through Dec. 27; thanks to Allan Lagumbay for the clarification. 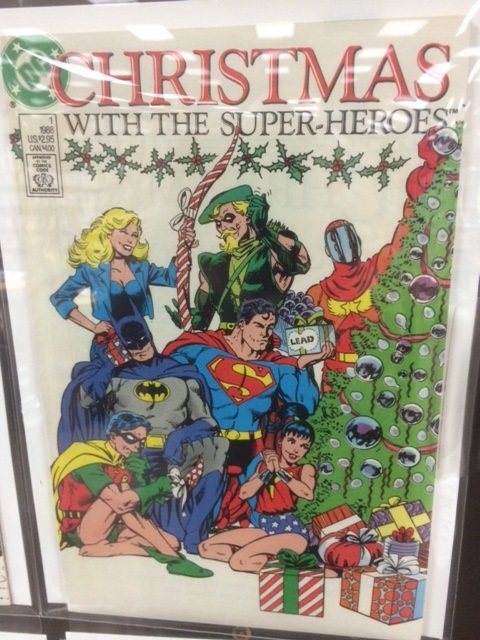 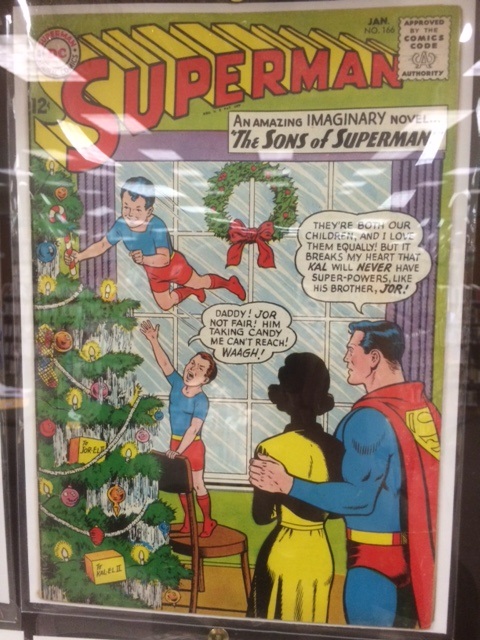 In honor of what would have been Frank Zappa’s 75th birthday on Monday, I present a shorthand look at his Inland Valley years — essentially 1959-1965 — in Sunday’s column.

Friday’s column starts with my look back at memorable restaurants of 2015 — and news that Pomona’s Stein Haus, the former Friar Tuck’s, has closed. After that: a bunch of short items from Chino Hills, the cinema scene and Upland. 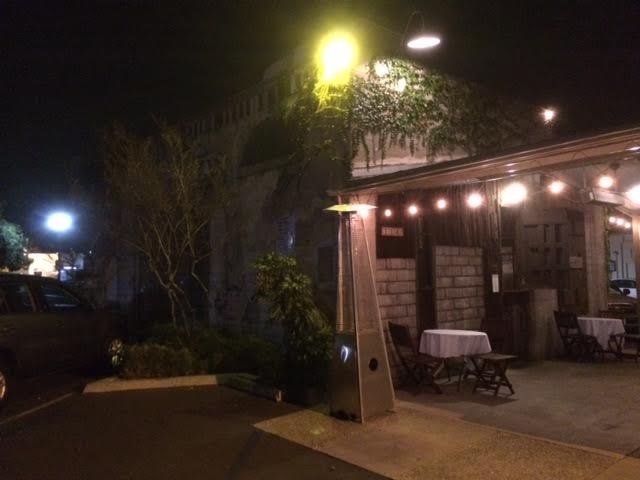 This is the former La Piccoletta, known as the little place in the alley (Alley 39, to be precise), pretty much in the center of the block bordered by First, Second, Yale and Indian Hill. It’s a small building with a trompe l’oeil mural outside and one small room inside.

La Pic opened in 1977 and once had a reputation as Claremont’s finest restaurant, but in recent years it’s changed hands several times; a friend and I had an inconsistent meal there six years ago on the one time I tried it. (It’s out of my usual price range.)

Now it’s been acquired by John Solana and Brad Owen, who have the Back Abbey and Union on Yale; Solana owns Petiscos with another partner. That makes four Village restaurants under Solana’s ownership. He and Owen quietly took over La Pic in 2014 when it became available and in November, after 38 years as La Piccoletta, changed the name to Uno Tre Otto and focused the menu on regional Italian with local ingredients. 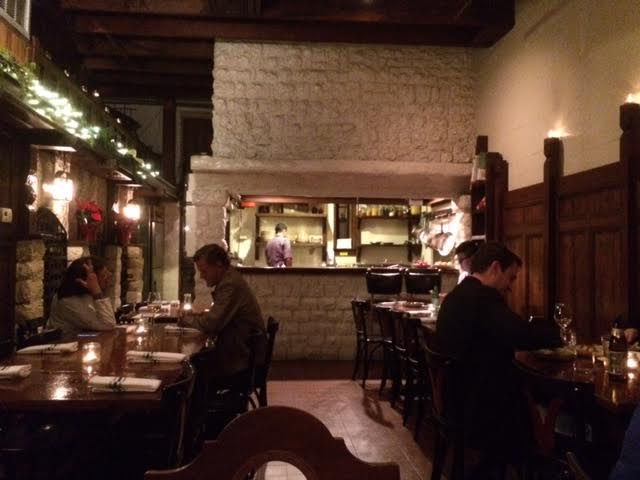 A friend and I had dinner there earlier this month. The interior looks much the same: rustic, with no windows and an open kitchen, seating 38 in an intimate space. It’s one of the more unique interiors in the valley.

The menu is small and is anticipated to change along with the availability of ingredients, many of them supplied by Amy’s Farm in Ontario, whose proprietor is Owen’s wife. 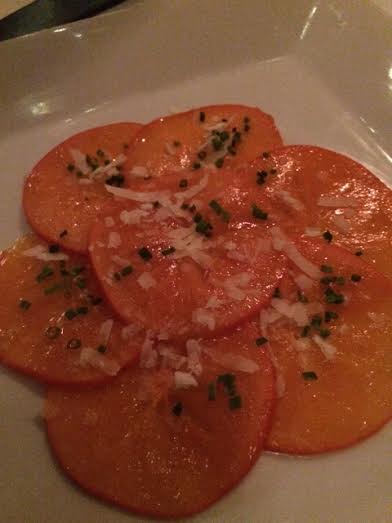 The kitchen sent over a free starter, thinly sliced persimmons with lemon, vinaigrette and parmesan. (Forgive the quality of the photos; the lighting is dim.) 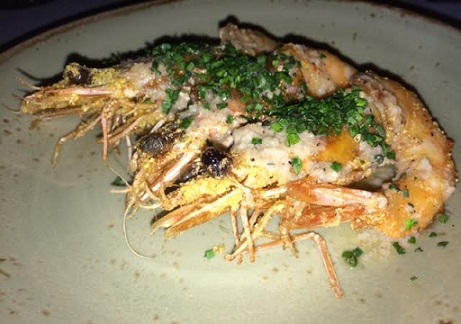 From there we shared wild fried shrimps ($15), four whole shrimp with lemon, garlic, parsley and chives. 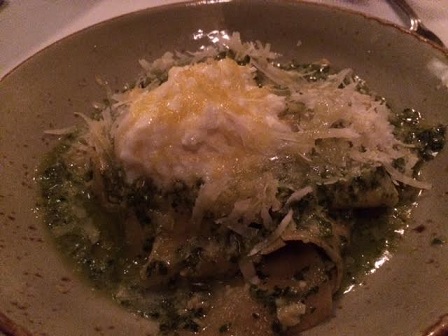 My friend had fazzoletti ($16), a pasta with kale-hazelnut pesto. 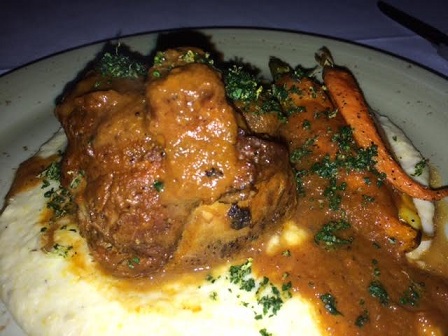 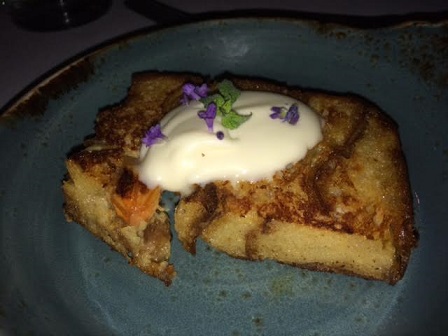 We then shared a dessert, persimmon bread pudding with creme fraiche ($8).

This was quite a meal, and in a lovely setting, on white tablecloth, the fanciest meal this hole-in-the-wall diner has had in a while. We were impressed by every item. My friend was effusive, saying she had never particularly liked persimmons or kale before but loved their uses here, and describing the charming environs as “kind of like being in a book.”

On our way out, after paying, I introduced myself to a man who turned out to be Owen, who’d been dining informally with his wife and three of his children. Our waitress, we learned, was his sister-in-law. All in the family.

While a meal of $40-plus per person, and that’s with only water to drink, isn’t something I’m likely to repeat soon, those with more ready cash, or celebrating an occasion, might want to give the place a try. They encourage reservations to (909) 624-1373.

I hope to write a column on the restaurant in the near future, but in the meantime, there’s this blog post. 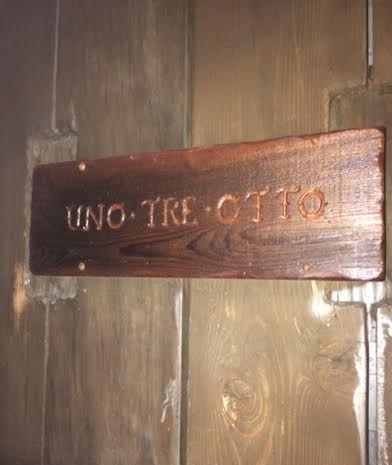