For my post-Thanksgiving column, I gather up reader comments going back to March (!), starting with an anecdote from a woman who happened to meet a famous writer and continuing with Salinas, roadside motels, La Verne and Cal Poly Pomona. All that’s in Friday’s column. 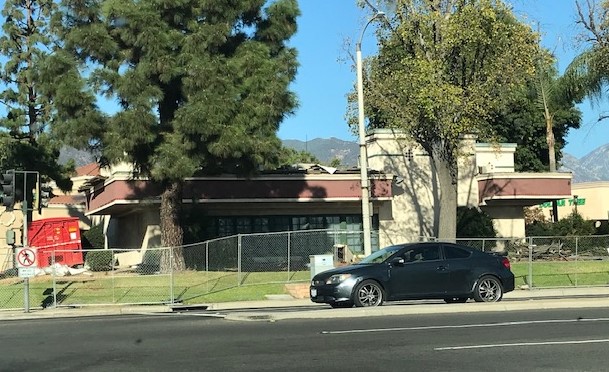 I was in La Verne at Foothill Boulevard and Wheeler Avenue when I noticed the old Bakers Square fenced off. A later check from the parking lot side showed the property was getting more than a new roof or makeover.

“Yes, the building will be demolished soon with a new Taco Bell building replacing it,” Eric Scherer, the city’s community development director, told me.

After googling, I was reminded that my colleague Liset Marquez wrote in January about approval of a drive-thru restaurant there, but the tenant wasn’t named by the would-be developer at the time. So that it’s Taco Bell is still news of sorts.

Fascinating side note from that article: That rather sad shopping center — whose anchors are Dollar Tree, CVS and Crunch Fitness — is carved up among 13 owners. No wonder it’s “falling apart,” as one councilman put it.

Bakers Square — remember them? — closed at the end of 2008 and reopened at the start of 2009 as Garden Square. It wasn’t that great and closed the following year. The building has sat empty ever since. 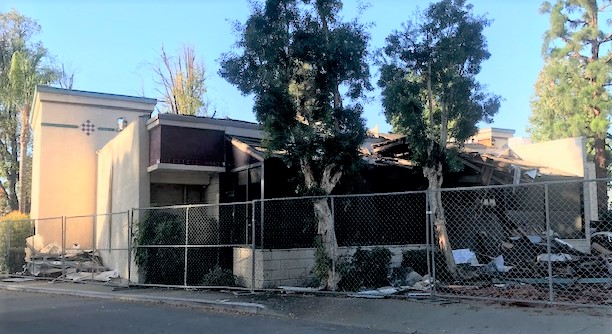 Discovery of a lost WWII American submarine was announced earlier this month, and there’s a local angle: One of the 80 crew members was from Redlands. His brother, who lives in Claremont, contacted me, and I interviewed him for a somber Sunday column. 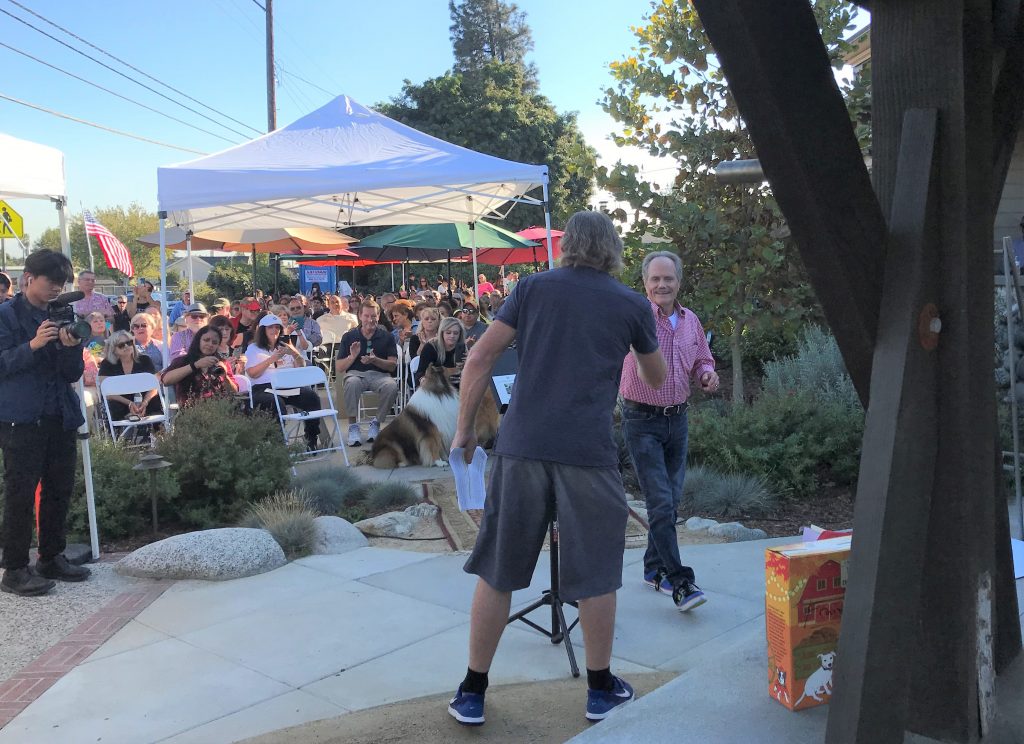 Jon Provost returned to his childhood home in Pomona for dedication of the newly renovated (and branded) Lassie House. Yours truly returned too. I also have some Culture Corner items and news that “The Purge 5” filmed in Ontario as well as Pomona. All that is in Friday’s column. Above, Provost is greeted by homeowner Ray Adamyk. Note the box of dog treats in foreground — and the collies in the front row.

In La Verne recently at lunchtime, I sought out the new Mexican spot in the Vons center. Don Baja Grill replaced El Patron II, a sitdown place that I liked (although the one in Rancho Cucamonga, not far from our office, is the one I patronize). Don Baja is fast casual, where you order at the counter.

Their specialty is fish tacos and burritos, shrimp, cocktails and ceviche, while also offering four types of meat: beef, pork, chicken and beef tongue. I have to wonder if La Verne has any other restaurants that sell tongue. (Note that I’m only wondering, not stating that as fact, which means I won’t be wrong if you name one or two other places in city limits that do. But there can’t be many.)

For vegetarians, they sell tacos with potatoes and burritos with beans and cheese and with (unspecified) veggies. 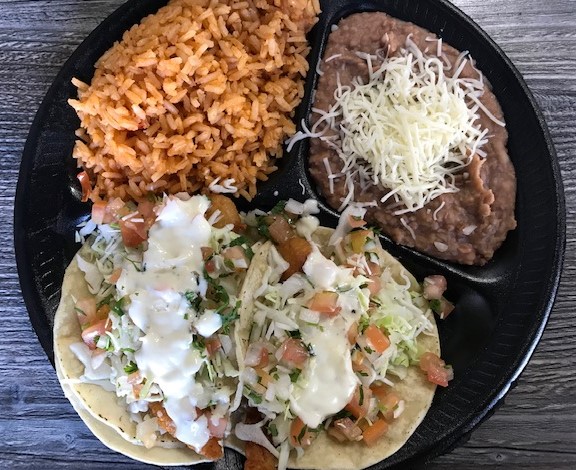 I got the two fish taco combo ($8.50). These were good, double-tortilla tacos with the requisite cabbage, cream and diced tomatoes. The rice was fluffy, the beans creamy. It’s 50 cents extra if you want your fish grilled rather than fried. I washed it all down with a watermelon agua fresca, which was among the drink choices that come with the combo, a good bargain.

I would eat at Don Baja again and wish them luck in a storefront that’s seen some turnover. 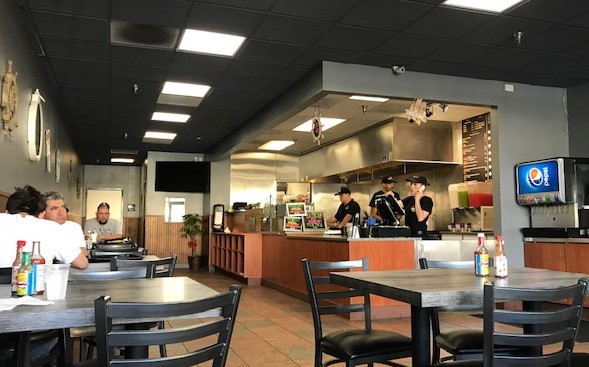 Downtown Upland’s Rad Coffee is open 18 hours a day, a rather astonishing schedule, especially for a shop in a mid-block location in a slightly dull (but perking up)  downtown. I write about the 4-year-old shop’s unlikely but undeniable success in Wednesday’s column. And check out the photos by Jennifer Cappucio Maher and Watchara Phomicinda! 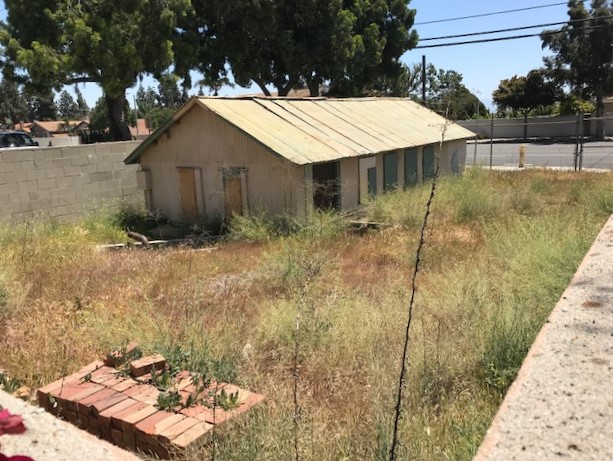 Back in April 2018, I was driving on 16th Street in Upland west of Mountain Avenue and saw an old building surrounded by chain-link fence and a wall. Curious, I pulled over for photos. It’s on a small plot of land by the entrance to the Carmel Circle East condos.

My thought was that the low-slung building was a chicken coop that had been granted protected status, odd as that concept seemed. I figured I would ask someone, although I didn’t know whom. So there it languished.

The photo was still on my phone’s camera roll when I noticed it recently. And the mystery occurred to me shortly after in a timely way: I was about to meet up with my friend John Atwater, a retired Upland senior planner who worked in the Planning Department from 1984 to 2009. Surely he would know.

I showed him the photos. He thought a bit. It’s not a chicken coop.

“It’s a leftover water utility building,” Atwater said. He couldn’t remember which small water agency had relinquished the property. It have have been in the 1980s or ’90s.

The land was sold privately and has probably changed hands several times, given that Atwater recalled several would-be developers dropping into City Hall to inquire about putting a fast-food restaurant or other business on it.

He had to tell them that the property, which they may never have even visited in person, was far too small for a business since the parking requirement would eat up the entirety of their land.

“It’s the footprint of a cell tower,” Atwater told me.

Until a cell tower or some other very vertical use comes along, it’s an abandoned water utility building. Perhaps one day, the chickens will come home to roost, but they won’t be doing it there.

You probably know, at least if you’re of the right age, that Sammy Davis Jr. lost an eye. But did you know he lost his eye in San Bernardino?

That happened 65 years ago. I write about that bit of notoriety, the crush of celebrities who visited him in the hospital and the star-studded benefit concert he led four years later on behalf of the hospital, all in Sunday’s column.

Trivia note: I knew about the accident after, years ago, being told that it had happened in Cucamonga and researching it only to find that was a bum tip. But I only learned about the benefit concert last summer, when I looked at Swing Auditorium’s Wikipedia entry before writing about the Rolling Stones’ concerts there. At that point I decided I needed to write about the accident’s 65th anniversary when it came up. Sometimes one column leads to another…

Mention was made in my column a while back of where to get Chicago-style hot dogs, which was almost nowhere (other than Chicago). But a reader told me about Portillo’s. I went there for a Restaurant of the Week last week, and now I’m writing more broadly about it for Friday’s column. That’s followed by another Midwestern item, about my St. Louis Cardinals, and then about a movie shoot in Pomona and an event Saturday at Pomona’s Lassie House.