In what I hope is a pleasant annual ritual, I count down the Top 10 strange news in the Inland Valley in Sunday’s column. Count along with me!

In an annual ritual, I clean my desktop and report some of my findings, all of them column items that almost got away. That’s my Friday column.

I revisit the subject of the old Tastee Freez in La Verne, with the hope that expectations for news are slow on Christmas Day. Merry Christmas, by the way! Now here’s the link to Wednesday’s column. 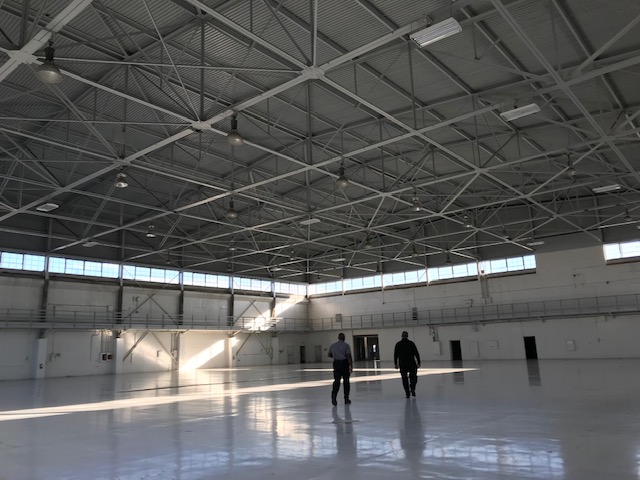 The movie did extensive filming out here in Ontario, Fontana and Pomona. I write about that in Friday’s column, with additional items about the Christmas concerts I attended in Pomona and Ontario. Above, the interior of the old National Guard hangar at ONT, used in the movie as Carroll Shelby’s car development shop. 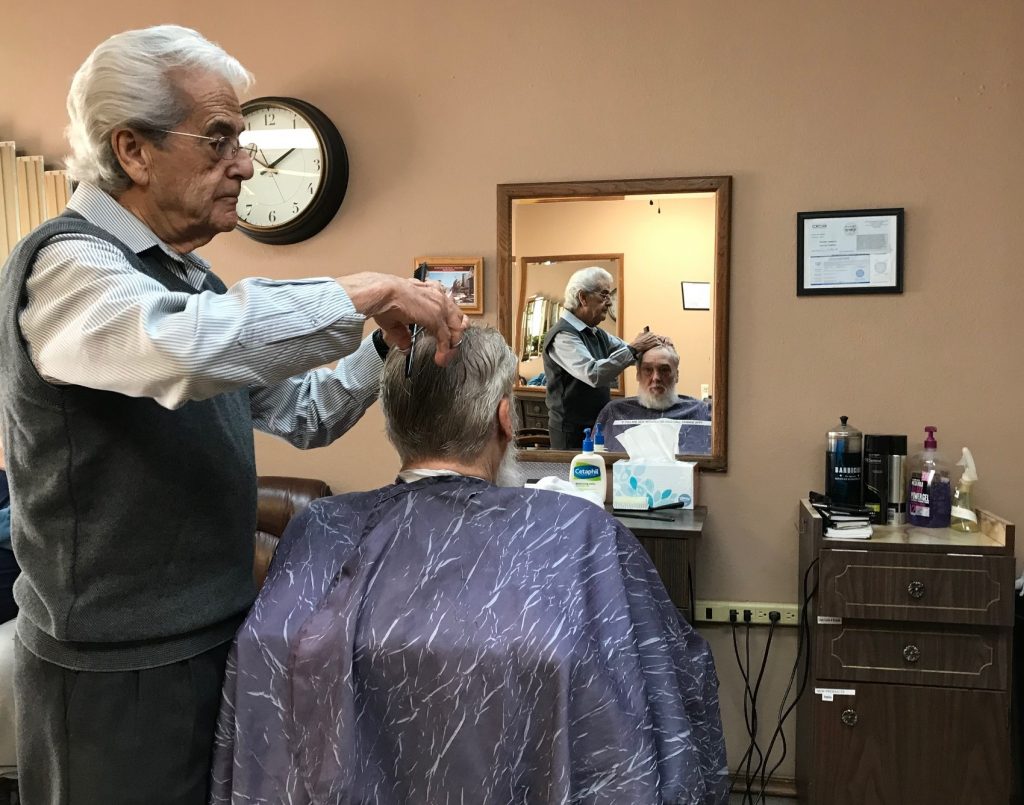 Rick Gonzalez has been cutting hair in San Bernardino since 1957. Now 84, he closed his shop Tuesday after seeing a few last customers, some of whom have been coming to him for decades. I observe his last morning and write about it for Wednesday’s column. Above, Gonzalez works on Hank Valance, 81, a customer since about 1960.

Wait, Fontana is the subject of two straight Sunday columns? Well, why not? I went to Tuesday’s City Council meeting and watched the retirement ceremony for a 30-year employee, and it was very sweet. That includes the story of how her future husband showed up to work to propose to her in unusual fashion. I wish Debbie Brazill well in Sunday’s column.

Podge’s Claremont Juice Co. in the Village is closing Saturday. Thinking it’d be nice to get an item into my column prior to that, I dropped in to inquire and found not only the owner but the previous owner as well. Also, a Pomona man will be on “Wheel of Fortune” Friday and the Pomona Christmas parade is Saturday. All this is in Friday’s up-to-the-minute column. 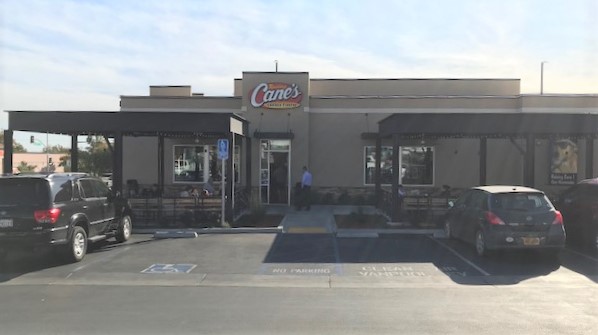 Founded in 1996 and based in New Orleans, Raising Cane’s is a rapidly expanding quick-service chain of chicken finger restaurants. Ontario has two and Fontana, San Bernardino and Upland have one each. Upland’s opened back in January and, after months of meaning to go and forgetting, I went there on my lunch break recently.

When I got there after 1 p.m., there was a line out the door (thankfully it wasn’t raining), and a majority of the seating was taken. However, the first register is angled toward the entry, close enough to the door that it takes only five or six people to make a line out the door. Very canny.

The menu is of course flat against the wall and begins a little beyond the first register. You can’t really see it in its entirety unless you’re ordering from the second register. 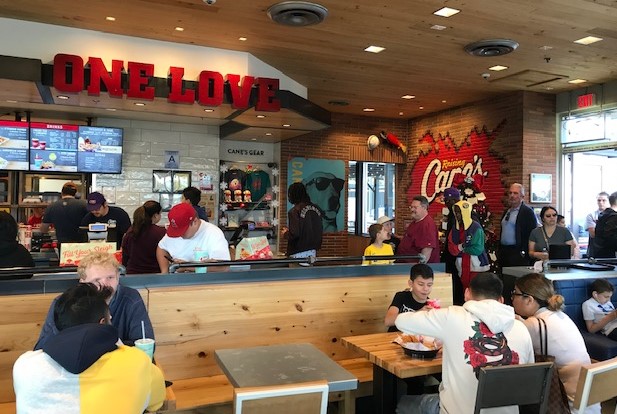 (I’m a little put off by their chirpy “One Love” motto, seen above. Bob Marley’s shade must be shaking his dreadlocked head at his song being used by a corporation. On the other hand, maybe the expression of unity and inclusion is a subtle jab at the Chick-fil-A founder’s retrograde social views, in which case, carry on.)

I got the three-finger combo with fries, toast and drink ($7.42). A four-finger combo that also had slaw was a little under a buck more, but I didn’t see it on the distant menu board until picking up my order directly under it. Oh well.

The chicken was fine, perhaps more heavily battered than is strictly necessary. The skinny crinkle-cut fries were crisp. It was a decent cheap meal. 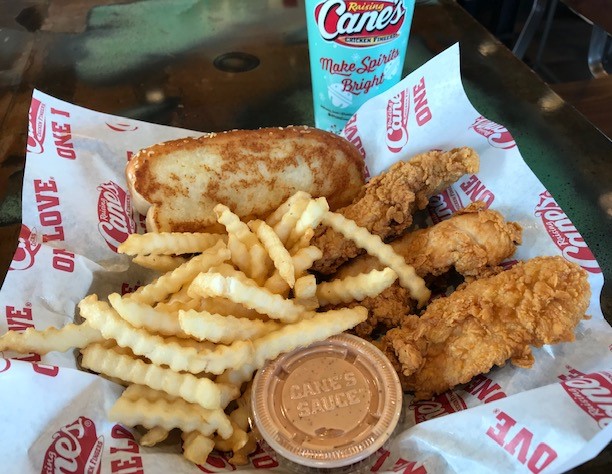 The music was cranked up too loud for comfort for my tastes. Employees were hustling. It’s a high-energy place. As when Lou Grant told Mary Richards that she had spunk, and he hates spunk, I’m not really a fan of high-energy places. There’s an expansive patio outside that was quieter, but also colder. That would be my preferred seating on a warm day.

As must be obvious, after all the hype about Cane’s, the experience was a slight letdown. Expectations adjusted, perhaps a second visit will be more to my liking. Food-wise and ambience-wise, I’d prefer to eat at Chick-fil-A. Although Cane’s is better on Sunday (rim shot).

One neat local touch on the wall inside the entry: a framed 1978 issue of Skateboard World magazine. The cover promotes not only a feature on the Cal Jam II concert in Ontario, but one on the “Upland finale” of a skating event, presumably at the old Pipeline skate park. 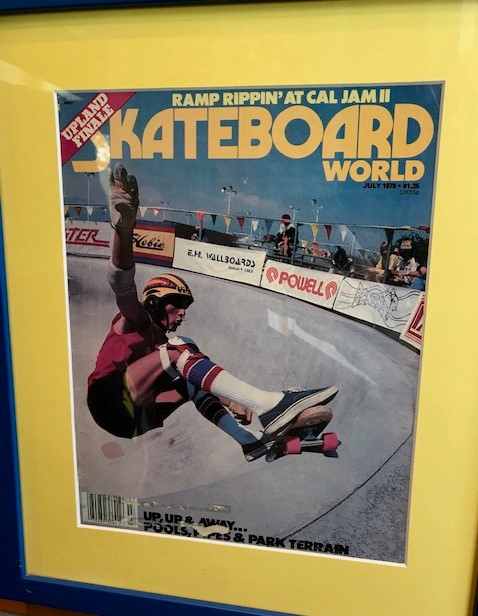 I took a modest walking tour of University of La Verne to hear about buildings that have been knocked down or repurposed over the decades, among them a former Tastee Freez and an Alpha Beta. That kicks off Wednesday’s column, followed by items about the TV mob scene at a Claremont Nativity display, upcoming Christmas concerts in Pomona and Ontario, and an Ontario man who’s on ABC’s “Great American Baking Show.”