Bugs Bunny and friends made jokes now and then about Cucamonga — sparingly, but memorably. I once compiled a list of six references. But now two more have come to my attention, so I go through the whole thing again, for completeness’ sake. That’s the subject of my Wednesday column.

And, as noted at the end, I’m on vacation, returning to your newspaper/news site on July 4.

A mural in tribute to a famed artist, Gilbert “Magu” Lujan, is going up in the Pomona Arts Colony, where the late painter once lived, and it’s really something. I write about it, and him, in my Sunday column. You might remember him from my “Pomona A to Z” series of columns and book; he’s the letter M.

The band made an appearance (but didn’t perform) at Music Plus in Chino on its opening day. (Can you believe 1981 is 40 years ago?) Also, Barbara Cheatley’s store closes Saturday, and an Upland figure retires, all in Friday’s column.

California has “reopened” — not that there was a promotional sale — and that means things allegedly returned to a version of the pre-pandemic normal as of Tuesday. But did they? And were we all onboard with that? Many of you told me you’ll continue wearing masks in many situations. I write about the new semi-normal in my Wednesday column.

On Tuesday, the Pomona Public Library will open for the first time in 15 months, and there will be some positive changes — not that the library wasn’t already lovable. I update you in Sunday’s column.

My column last month about my two-night stay in Palm Springs drew a lot of comment, mostly pro, some con. A lot of you love Palm Springs and offered your own tips or backed mine; some thought I’d misspent my time. I write a cheerful follow-up for Friday’s column.

I know I said that if any more Joan Baez anecdotes came in following 3 1/2 columns on her in the past few months, I might pretend to have died in the meantime. But one more came in, and another hadn’t been used, and she was on national TV as a Kennedy Center Honors designee. So that seemed like enough to justify a partial column — in my mind, at least. Items from San Bernardino and Pomona round out my Wednesday column.

A passing mention in my recent Palm Springs column of a sportswriting legend’s plaque on the sidewalk brought a note from his widow. Also, readers react to recent columns on my Metrolink trip and my St. Louis Cardinals fandom. I close with an item based on the curious name of a restaurant that I happened to drive past after leaving the Trujillo Adobe last week. (It never hurts to drive around and keep your eyes open.) All of that appears in my Sunday column.

Remember how Riverside’s Harada House was named in 2020 to the 11 Most Endangered Places list by the National Trust for Historic Preservation? Lightning has struck twice (hopefully not damaging any historic structures!), because a Riverside structure made this year’s list too. Read about the crumbling Trujillo Adobe in my Friday column. 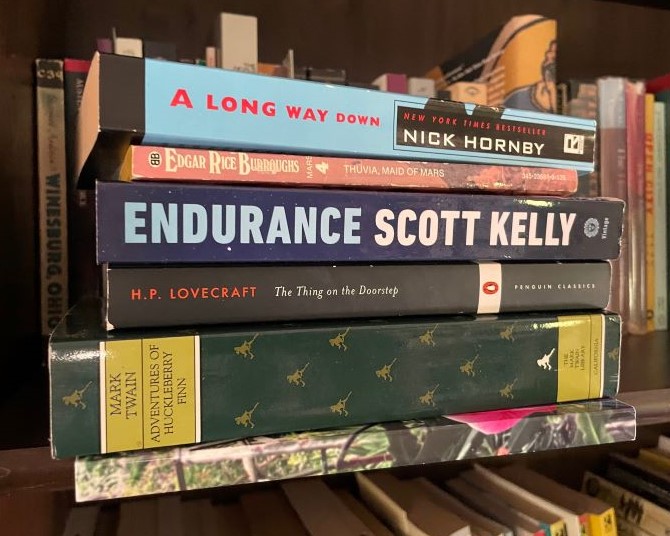 Happy June! Increasingly happy June, in fact. But we’re here mostly to talk about our May in reading. After I finished five books in January, five in February, five in March and, rather anticlimactically, five in April, in May I read six. As usual, some were largely read the previous month, but May is when I wrapped ’em up.

I read books by four favorite fiction writers and memoirs by an astronaut and an artist. Here are my capsules, and I don’t mean space:

“The Thing on the Doorstep” (2001): A few minor stories, a couple of major ones and two short novels, The Case of Charles Dexter Ward and At the Mountains of Madness, both of which have their moments of tedium besides their moments of delight. It’s the usual mixed bag since most HPL books are designed for completists, as is this Penguin edition, one of three. The annotations by S.T. Joshi can be a bit much, treating HPL as if he were James Joyce, but they do establish how grounded much of his writing was in the real-life history and milieu of New England. But I can’t recommend it.

“Endurance” (2017): Any Apollo kids jaded by today’s more modest space missions, like me, will wake up after Kelly’s account of his year (!) on the International Space Station. Kelly is an engaging, candid and dryly humorous storyteller. At times the background of his pre-NASA career drags, but overall this is pretty great, with surprising details. Like how stuff can get lost on the ISS literally for years. Or how his brother sent him up a gorilla suit. I own the print edition but checked out the audio version from the library: It’s read by the author, who gets the tone right, as well he should.

“Huck Finn” (1885): Huck and Tom traveling down the Mississippi on a log raft remains one of the iconic images in American literature. The novel itself is loose and baggy, and the King and the Duke sequence goes on too long. But Huck’s moral awakening is all the more powerful because he doesn’t realize that’s what it is, and as Toni Morrison points out, Twain handles the racial matters as deftly as the times would allow. Great American Novel? Probably not. But it’s up there.

“Thuvia” (1916): Moving on from the original John Carter of Mars trilogy, ERB puts two minor characters center stage, to good effect. The legions of warriors conjured up from nowhere is an inventive touch. While less mythic than the trilogy, this one is modestly likable, slim and quick-moving, with a satisfying finish.

“A Long Way Down” (2005): A grim premise, verging on tasteless: Four strangers meet on a high London rooftop on New Year’s Eve, intending to jump but talking each other out of it. (Four Characters in Search of a Final Exit?) Out of this disorienting start, Hornby pulls off something mildly entertaining, if still problematic and perhaps beyond his talents at that point. I own the print edition but checked out a library’s audio version; Hornby’s conversational tone translates well to being read aloud. The three actors are very good, especially Kate Reading’s voicing of Maureen.

“Color” (2020): An Upland artist well known in the Pomona Arts Colony, Cole self-published this memoir. Almost one-third recounts her memories of her 1930s and ’40s childhood in the Plains States, including time on an Indian reservation, and in Northern California. Not professionally written by any means, and more of a memory bag of incidents and details than it is a story, it nevertheless provides a window into a rural life most of us can scarcely imagine.

“Huck Finn” is the obvious winner this month, and probably would be in any random month in which it was read. “Endurance” is worthwhile too, if less crucial.

Here’s when and where the books came into my life: “Color” was a gift this spring from Cole, a casual friend and column subject; “Endurance” was a gift in 2019; “Doorstep” was bought at Santa Barbara’s Chaucer’s Books in 2019; “Thuvia” was bought used at LA’s Black Ace Paperback Show in 2012; “Long Way Down” was bought at Montclair’s Borders in 2006; and “Huck Finn” was bought way back in 2002 at Big River Discount Books in the most fitting town imaginable: Hannibal, Missouri.

You may notice that I skipped John D. MacDonald’s Travis McGee series in May after reading one of them for four straight months. The title of the next book, “The Scarlet Ruse,” is in keeping with two other unread books of mine with that color in the title, so I decided to put it off a month and use “Ruse” as an excuse to knock off the other two. Extra credit to anyone who can guess both correctly. Not reading a McGee gave me time to finish Cole’s book and to read another small chunk of the “Writing LA” anthology.

How was your May? Reply in the comments with your mini-reviews of your own reading, or any thoughts on mine, please. And as they used to say on “Hill Street Blues”: “Be careful out there.”

Next month: Three (I hope) studies in scarlet, plus more. 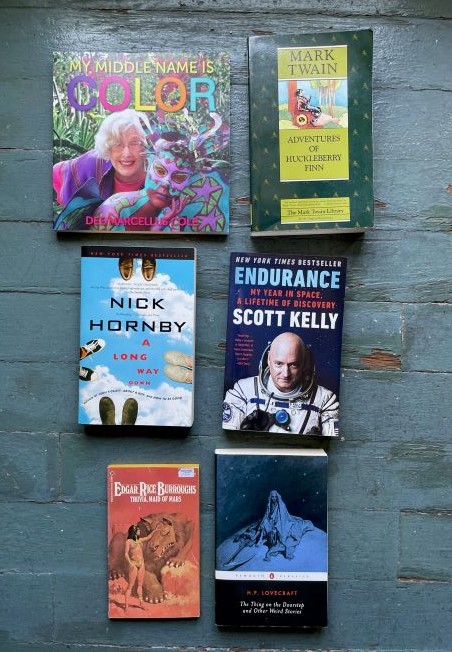