This bar and grill opened in August in the former El Merendero space on the corner of Third and Garey, right outside the Fox Theater. The bar has 25 TVs, plenty of natural light through the expansive windows, seating at the bar or at bar tables and female servers in striped referee uniforms. Not really my scene, so before a recent City Council meeting, a friend and I had dinner at one of the quieter outdoor tables along Garey.

I was dubious about the menu, which has burgers, a few salads, the usual appetizers and a couple of Mexican items, including something called fish and chip tacos. My recollection is that cheese was an ingredient on a couple of items that don’t typically have cheese.

Skeptical about the expertise of the kitchen, I opted for a burger ($8), figuring that was a safe choice, and my friend had the sliders ($10). The burgers are Angus beef and mine was above average, dense and satisfying. The fries that came with it were fine.

I don’t think I’d risk ordering a salad here, but you’re probably safe with the sandwiches. It’s good there’s a moderately upscale sports bar downtown, and in a great location. I hope they do well.

Walking back to my car a couple of hours later, I saw about two dozen people inside watching football, plus another two or three on the sidewalk watching through the windows.

The Mission Promenade complex in downtown Pomona may be positioning itself to compete with the Miss Pomona pageant.

The Upland sculptor’s 22-foot statue of an early California rancher, based on Pomona founder Ygnacio Palomares, has stood at the L.A. County Fair since 1953. My column today tells the story. You can read it by clicking below. Here’s Svenson, 87, with his handiwork on Sept. 22 outside the Millard Sheets Center for the Arts.
END_OF_DOCUMENT_TOKEN_TO_BE_REPLACED

A storefront at 2nd and Yale in the Village, previously occupied by a short-lived children’s clothing store, now bears a sign promising Cocoa Bakery. A friend saw a man taping up the sign Monday evening. The interior is completely bare, so I wouldn’t start lining up for bread or anything. The family-owned bakery has one other location, in La Puente.

The Village is already home to Some Crust Bakery and Le Pain Quotidien.

It was 110 degrees Monday in Ontario. In Upland, Nancy DeWitt put her thermometer in the sun, which is a meteorologocal no-no, and got an even more oppressive reading. At least it’s a dry heat.

DeWitt reports: “My poor hubby works for The Gas Co and was out and about driving without air conditioning. Last week he worked in Pismo Beach and it was no problem.”

How’s the heat treating the rest of you?

Jerry Lee Lewis turns 75 on Wednesday, but he celebrated four days early with a concert at the Fox Pomona, billed as his 75th birthday party.

It was a wide-ranging audience, from teenagers to seniors, with plenty of younger rockabilly fans in western shirts, jeans with rolled-up cuffs or tattoos. A reported 700 people were in attendance.

After opening sets by Head Cat and the Reverend Horton Heat, Lewis’ band took the stage (sans Lewis) to warm up with four songs.

At 10 p.m. and without fanfare, Lewis walked onstage carefully, clad in an untucked shirt, jeans and loafers, like he’d just wandered in from bingo night. He performed 11 songs. He got better as he went along, and his band gave him excellent support.

“Great Balls of Fire” ended with a nice bit of pounding on the high keys that drove the crowd nuts, a reaction that elicited a smile from the otherwise blank-looking Killer himself. Lewis quipped something that sounded like “I did the one, I might as well do the other,” before launching into his other signature hit, “Whole Lotta Shakin’ Goin’ On.”

Near the end, he slowly rose, gingerly kicked (more accurately, pushed) the piano bench backward and pounded the ivories a few seconds while standing. He then impishly sat on the keyboard before shuffling offstage to a big ovation at 10:40. No encore.

How was he? Definitely diminished in energy, a shadow of his wild-man youth, not to mention his wild-man middle age. Lewis is four years younger than the Fox, but not in as good a shape. But even a shadow of Jerry Lee Lewis is pretty good. As a longtime admirer, I’d say he was worth my $32. (Even if that amounted to almost $1 per minute.) And it’s cool to be able to say, “Jerry Lee Lewis? Yeah, I saw him once.”

Now if the Fox could only get Chuck Berry…

Here’s a more enthusiastic take from the L.A. Times. And below is a video of the last two songs — YouTube, we love you.

A residence on Archibald Avenue in Rancho Cucamonga is flying his or her flags proudly, all four of them: U.S., Dallas Cowboys, Texas state and L.A. Angels. Finally, at the bottom, an acknowledgment of California! The expatriate Texan must not think much of the Texas Rangers.

Sometimes restaurants become so familiar we sort of forget they’re there. I see Aruffo’s all the time and yet don’t see it. Aruffo’s opened in 1986 and it’s near my house, but I’d only eaten there once, maybe 10 years ago, and my memory was of a solid but unspectacular lunch. Recently a friend who loves the place suggested it for lunch and I was happy for the excuse to renew my acquaintance. 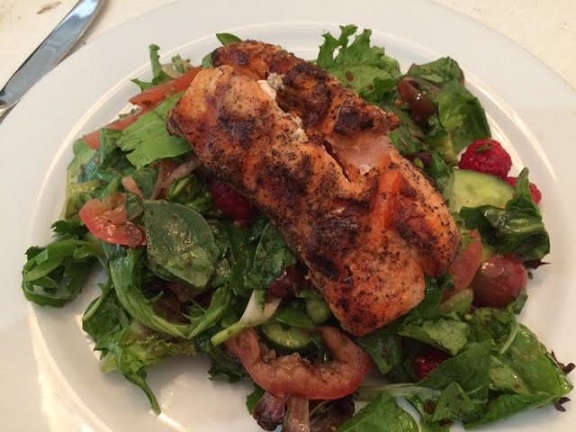 And yet I couldn’t pinpoint which street in the Village it’s on, guessing Harvard but finding it one block over, on Yale. Oh, yeah, across from Some Crust. Aruffo’s is quite pleasant inside, with lovely murals and vintage posters and an upscale feel. A delicious round loaf of herbed bread was delivered to our table. I had the salmon Caesar ($15, I think), which was topped with ocean-caught, not farm-raised, salmon. It was delicious too. My friend was likewise impressed by her arugula salad.

In other words, Aruffo’s made a strong second impression. 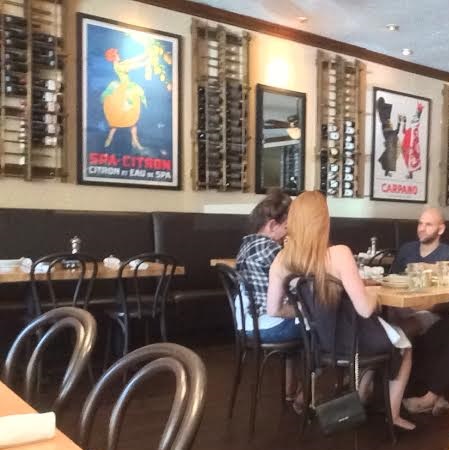 Update April 2016: And a strong third impression. I ate here with an Italian friend who loved her ravioli dish. I got the salmon caesar again.

This animatronic Tyrannosaurus is part of the “Jurassic Planet” exhibit at the L.A. County Fair. About 20 dinos, from various full-sized beasts to a few toddlers (if that’s the right word, and I’m sure it isn’t), move their heads, jaws, tails or puny arms. Entrance is free with Fair admission, and worth the time. Bonus: no calories.

Only nine days remaining for the Fair, which is closed Mondays and Tuesdays and ends Oct. 3.

Claremont reader Ron Scott saw this sight at his apartment complex recently. He found the young woman involved and asked how this happened. “She thought she had it in reverse,” he reports.