Lord Charley’s is the gift that keeps on giving, at least as far as I’m concerned. Here’s the latest about this restaurant that’s been defunct almost 30 years. Remember the couple mentioned here recently who had their first date at Lord Charley’s in Upland? They were given an original sign, the one bought from an antiques shop in 2016 that had also made my column. I tell about the gift of the sign and the couple’s first date in Wednesday’s column.

Area libraries are closed up tight, but Rancho Cucamonga’s twin branches are doing curbside pickup of books and other physical materials, and one branch’s computer center is open for those without internet or a computer at home. “People are finding out about it, which is what we want,” the library director says. I write in praise of an innovative library in Sunday’s column.

In one item, I write about the possibly permanent closing of the Mt. Baldy Trout Pools after decades of offering an easy way to catch a trout. In the second, I write about the mayor of Pomona and his wife having their first child during the pandemic. Those, plus a Valley Vignette (under a new name), make up Friday’s column.

After beer sales plummeted, Upland mainstay Last Name Brewing teamed with Electric City Butcher to open a small market in its taproom. You can get meat, eggs and, of course, beer. “We’re all doing what we can in this strange time,” the brewery president says. I write about Dale Brothers Market in Sunday’s column.

In Wednesday’s column, I buy a mask, share what readers told me about how they got their masks, and google “neck gaiter.”

Did you know the couple behind Knott’s Berry Farm met in high school in Pomona? Well, you may have if you’ve read my column for a long time. Regardless, I go into all that again for Knott’s centennial, as well as telling you more about handwashing (and lack of same), about a couple who tried to recreate their first date at the long-gone Lord Charley’s restaurant and about Dave Stevens, an Upland civic leader who died a week ago, all in Sunday’s column.

As raindrops keep fallin’ on our heads, unless we stay indoors that is, I decided to write about the rain, which is becoming part of our lives almost as much as March did (in its 887 days). I posed the question on Facebook as to how people were handling the rainy weather and if even fans of rain were having second thoughts. Dozens of replies came in. I write about that in Friday’s column.

I went out in the light showers of Wednesday late afternoon and Thursday morning to await a passerby holding an umbrella. Got a not-quite-sharp enough photo Wednesday and a good one Thursday after a lot of tromping around my neighborhood. Not surprisingly, people prefer to go for a walk when it’s dry. 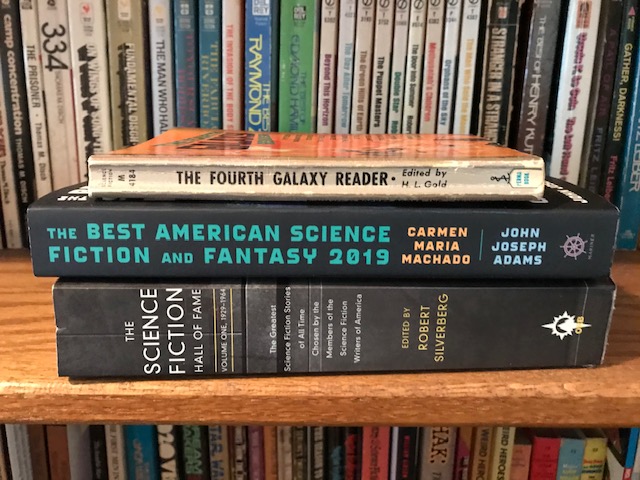 Welcome, readers! Here we are for the ol’ Reading Log during a completely typical time, so let’s get right to it and —

OK, let’s stop there. First, apologies for the delay in getting this post written and published. I ran out of time to do it the weekend of April 5-6, and didn’t have a chance to get started on it until late in the afternoon Wednesday. But better late than never, i.e. Restaurant of the Week, right?

Needless to say these are strange and uncertain times. We’ll be proud one day to say we lived through them — presuming we do live through them. Be vigilant. But also be aware. Pay attention. We’ve never gone through anything like this, and we must remember what it was like, and savor the moments so that we can remember them, and tell people about them one day.

As bookish sorts, we are perfectly poised for a period that calls for us to stay indoors and occupy ourselves. We have, in fact, trained our whole lives for this. Let us not fail ourselves in this dark hour.

The back half of March was when stay-at-home orders started to take effect, and that may have affected all our reading for the better. We’ll learn in the comments section.

Personally, since I’m still on the job, I haven’t had much more free time than usual. It’s weirdly disappointing. And while I may have read a bit more overall, I wasn’t toting a book with me to lunch, since I wasn’t going to lunch, since restaurants were closed. I did take a book if I ordered takeout and had to wait, but it was hard to get in more than a page or two before my order was ready, darn the luck. And forget about getting a hot drink and sitting outside: It’s been cold and raining much of the past month.

Ah, me. Anyway, onward to March’s books. I had a science fiction short-story thing going on, with three anthologies of stories by various writers. (I used my SF bookcase for the photo up top, where my books felt right at home.)

“SF Hall of Fame”: I had been reading this off and on since October, and in fact that’s one pitfall of doing these monthly posts. Faced with 650 pages of short stories, I’m not going to be able to read it straight through in a month, and rather than leave a post blank some month, I nibbled away at this book a week or two at the end of some months until I was far enough along that the first half of March could be spent finishing it.

As the name suggests, it’s a collection of great stories from the classic era, chosen by leading SF writers of the 1960s who knew the field and its history. I like science fiction, as must be obvious by now from past Reading Logs, but I’m not well-read in the field, and thus almost all these stories were new to me. Nearly all of them made an impression. A consistently good to great anthology. The two subsequent volumes collect novellas from the same period.

“Best American SF 2019”: I’d seen this last fall and was intrigued, but I held off buying it while I had that “Hall of Fame” book unread. It seemed only fair. Having finished it, though, I rushed out to pick this up, curious what modern SF looks and reads like. I hadn’t really read any 21st century SF.

I was impressed by the range of voices, tones and themes, and by how many stories were written by women or marginalized people (or both). Fair warning, these stories are on the literary side, with nary a rocket ship in sight. Fittingly, some contributors seem to be living in the future themselves: In their bios, two use they/their pronouns, and one says of herself: “Ada is bisexual, genderfluid, polyamorous and mentally ill.”

I bought “Hall of Fame” at Borders Montclair in 2008, full of promise, then put it on the shelf, where it made me feel guilty for the next 11 years. “Galaxy” was a gift from reader Rich Pietrasz, who had gotten it from reader Doug Evans. Rich passed it along to me in 2015 and I can finally say I’ve read it. Thanks, Rich. And “Best American” was bought at the Barnes & Noble in Rancho Cucamonga on March 16, a few days before retail stores were ordered closed. Whew! I really wanted to have this in my “books acquired” and “books read” lists the same month. That’s happened only a handful of times.

What did you all read in March? Are you finding more time to read, the same or less? And do you have any reading goals for the pandemic? I wish I could say I was going to tackle “Middlemarch” or something, but that’s not how April is looking. On the other hand, I have finished a book already and am in the midst of two others…

Next month: an emotional rollercoaster (and how appropriate is that, right?). 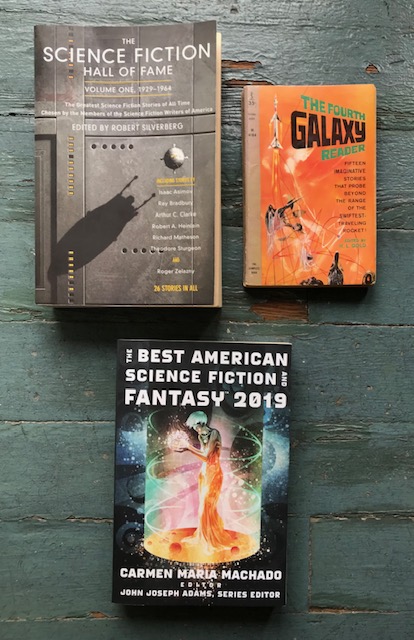 No cake, no backslapping, of course no handshaking, and no audience either. La Verne’s new mayor is sworn in to a room of empty chairs. I attend one of the strangest council meetings of my career (which is saying something) and write about it for Wednesday’s column.