We haven’t done one of these for a while, so here’s a Memorial Day-themed photo from around the Inland Valley. Can you guess where?

As usual, we’ll withhold all comments, or at least all correct guesses, until the contest closes this evening.

Here’s a link to the three previous quizzes.

The text on the sign reads: “For your country’s sake today; for your own sake tomorrow.”

* Update: A.S. Ashley correctly identified this as Memorial Park in downtown Pomona; Allan and REN were mostly right in giving the location but using the old name, Central Park. Thanks for participating, everyone. And we’ll do another Photo Quiz, on a non-holiday weekend, sometime soon.

Mes Amis opened in January in half of a contemporary glass and steel building just north of a busy intersection. My Chino Hills friends found it on Yelp (where Mes Amis currently gets 4 1/2 stars) and that night four of us had dinner before watching “Lost.”

The interior is sleek, with plenty of natural light, tables and no booths, a gold and rust color scheme, tasteful decor and a TV silently playing in one corner. Most of the cooking can be seen from the dining room.

The novelty, as outlined in Friday’s column, is that Mes Amis has two locations: London and Chino Hills. (Perhaps Paris was too crowded.) The owners are brothers, a continent apart, and although the menus are similar, each owns his own location.

The menu is Lebanese, but with a modern take, and the food shows a high level of care. We had a “journey,” one of four appetizer plates that cost $9.95 (for now). It had four items, like a bento box, and divided among four people, it was almost a meal.

Our entrees included mixed kabobs with lamb and chicken (pictured) and the Double Treasure, which is lamb patties with two sauces. The entrees were around $15. After the “journey,” we probably could have ordered two or three entrees instead of four. The meat was tender, the grilled vegetables delicious, the presentation thoughtful. We all liked our food quite a bit.

Service is non-intrusive and leisurely, by design. We certainly weren’t rushed; indeed, our server took our “journey” order and didn’t return to take our entree order until we had finished the appetizer. Owner Sammy Elias later told me that was slower than even he’d like, but that the idea is to slow down to eat as the Lebanese do.

Our suggestion would be a note to this effect on the menu, or an explanation from the server that could begin: “Have you dined with us before? Our philosophy is…” Many diners will embrace the policy, but it may be counterproductive (see the criticism on Yelp about the service) not to tell us what it is.

That quibble aside, we liked Mes Amis very much and are anticipating our next visit, and our next “journey.” The only local Lebanese restaurant at this level that I’m aware of is Casablanca in Claremont, and Mes Amis may be even better.

I’ve gone back and taken photos at Stuft Pizza Cafe and Richie’s Diner, both in Rancho Cucamonga, to enliven those posts, which were written in this blog’s pre-photo days.

This campaign sign (anti-campaign sign?) recently popped up in various locations along Fourth Street in Rancho Cucamonga and Ontario. This particular one was found in the lawn outside the Daily Bulletin — tsk, tsk — where an editor removed it and presented it to me. It’s currently occupying a proud place in my overflow cubicle.

Some friends and I attended the “Lost” finale party Sunday night at the Orpheum theater in downtown L.A. My seats were in the front row, a marvelous bit of luck (I got them through Ticketmaster like anyone else).

Before the finale aired, we heard from L. Scott Nadler, who played Rose, and Michael Emerson, who played Ben, as well as from a few minor players (Walt, young Ben, Kate’s father and a Dharma guy). Emerson, who was the audience favorite, was particularly articulate and charming.

Asked how he played the duplicitous Benjamin Linus in the times when he didn’t know whether his character was lying or not, Emerson said he simply said his lines earnestly and let the audience sort out fact from fiction.

Several people in the audience came in costume. The guy across the aisle from me was in a Hanso Corp. lab coat with the lottery numbers stitched on the back.

Reader Ric Stevenson wonders if anyone remembers the Upland Inn, a restaurant and boarding house once owned by his aunt and uncle.

“The Inn was built around 1901 and was first used as a boarding house. In the ’60s it became very popular as a fine family dining restaurant. As a kid I spent a lot of fun times there with my cousin and ate some great food,” Stevenson writes.

Bill and Barbara Vallon, his aunt and uncle, owned it in the ’60s. The inn, located on Ninth Street, burned down.

Anyone able to help? 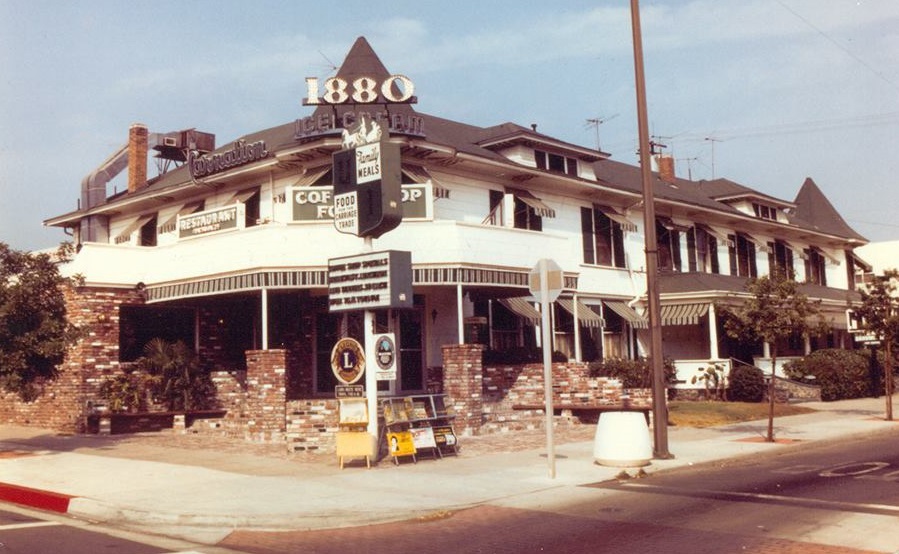 * Below is the original, but charred, sign, now in the garden outside Molly’s Souper at First and D.

A model home turned into a restaurant with a cactus garden out front, at the confluence of three streets, the location of Ramon’s Cactus Patch is as unusual as its name. (The simplest way to get there is to take Mission Boulevard.)

Ramon’s is also the oldest restaurant in Ontario, opening in 1937 and still owned all this time by the same man, Ramon Sanchez.

Inside this quirky gem are high-backed wooden booths salvaged from the old Orange Hotel in downtown Ontario, where Ramon’s plied its trade before moving here in 1962, and framed photos of various old Ontario buildings. A vintage painting of a mysterious Mexican beauty is the focal point of one wall. The pre-electronic cash register is decades old. The overall effect is like stepping into another world.

The two-page menu is faded, like an artifact from an earlier era. Other than the prices, the menu probably hasn’t been updated since the 1960s. The cooking is plain and comforting, a reflection of mainstream Mexican American food from midcentury, stubbornly untrendy.

Some don’t like the tacos, which use essentially a hamburger patty as the filling; I haven’t developed the habit either. I always go for the chicken burrito ($5), which comes with a tiny salad with a salsa-like dressing. The complimentary chips and salsa are always good, the lightly spicy salsa arriving in a curious tapered glass bottle that resembles the one Barbara Eden slept in.

Like Vince’s Spaghetti and Yangtze, Ramon’s is a time capsule, one that offers a taste of old Ontario. Ramon still visits his restaurant most days. Today (Friday, May 21), he turns 96. Go wish him a happy birthday.

“My wife saw this on her Facebook page, and we really were stumped at how many items could be on an Ontario bucket list.”

For an outing to L.A. on Sunday to the L.A. County Museum of Art, I used four types of public transit — a personal best, not that I was keeping track:

* Locomotive (i.e., Metrolink, to get from Claremont to Union Station)

* Subway (i.e., the Purple Line, to get from Union Station to Wilshire and Western)

* Light rail (i.e., the Gold Line, to get from Union Station to Little Tokyo for lunch)

The whole thing cost $11, with my $11 Metrolink ticket acting as an all-day pass for subway, light rail and bus, and of course I avoided parking fees.

The Metro Rapid bus is a wonder, by the way: The bus stops are stylish, the bus arrives every 10 minutes, it barrels along with very few stops and, as I said, it was free with my Metrolink ticket. It was my first time but I’ll ride it again.

“Reading about Henry’s reminded me of the great Taco Kitchen located in the middle of an orange grove in an old pump house at the end of Bonita Avenue in La Verne. In those days Bonita did not go through to Claremont, it stopped on the edge of the orange grove just out of the east side of town. You took a small one-lane road into the middle of the grove to find the restaurant.

“On hindsight the food was not just good, it was outstanding. The owners, Elsie and Marshall Moss, presided over every meal. One of them was always there.

“Local people waited the tables and each plate had to pass under the eyes of Elsie or Marshall before it hit your table. The enchiladas were to die for coming piping hot, right from the oven, with the cheese still bubbling. And the tacos and beef tostadas were the best I have tasted even to today.

“The restaurant was always full. Right up to the last time I went there in 1970, it was good to the last plate. I often have thought of starting a Taco Kitchen in Tiburon where I now live and replicating the great recipes accumulated by Elsie and Marshall from their trips to Mexico.

“The funny thing was that it was located in La Verne, whose population was American mainstream. But oh how they loved the Taco Kitchen — La Verne’s little surprise.”

What a nice reminiscence. Thanks, Bill. Here’s some additional information: Taco Kitchen’s address was Fourth Street at Fulton Road (phone number LYcoming 4-2453). The building dates to 1944 and today, heavily remodeled, it’s home to Simpsons Floor Covering and an insurance office. No enchiladas or orange groves in sight.