A tip led me to the wine section at Trader Joe’s, where there’s an Australian wine inspired by the co-founder of Ontario and Upland. Also, our dining out reviewer is retiring. I report on both of those items in Friday’s column. 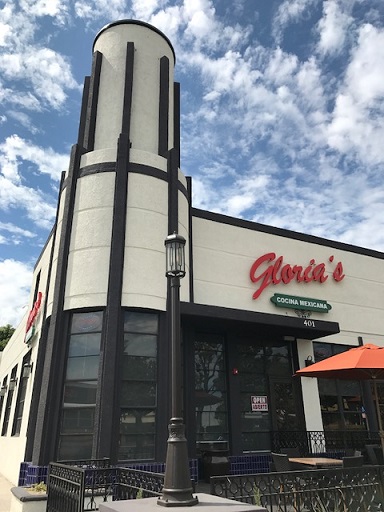 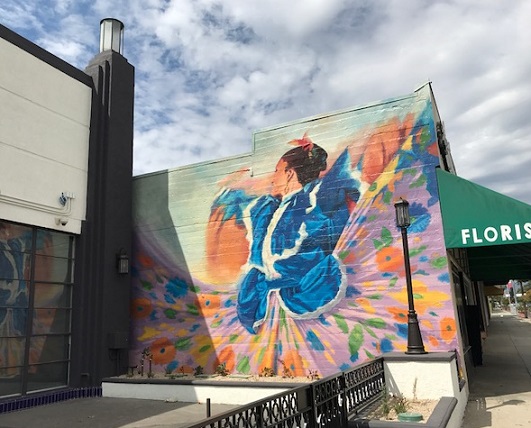 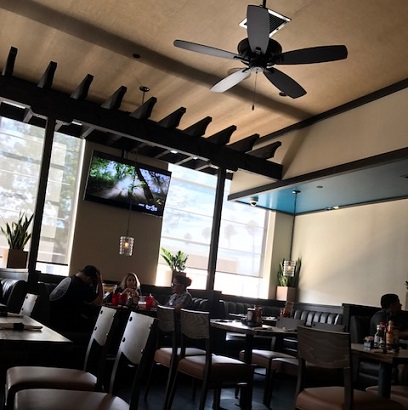 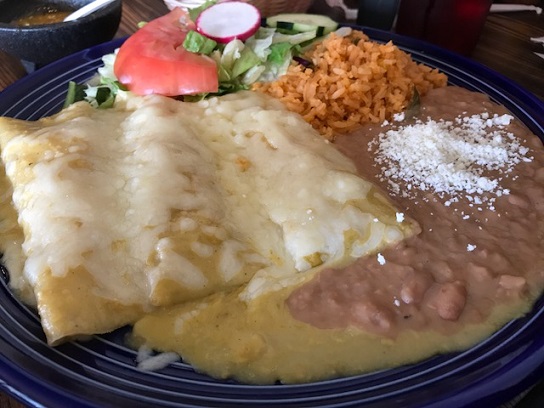 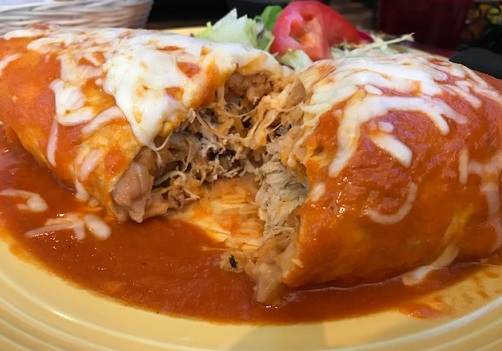 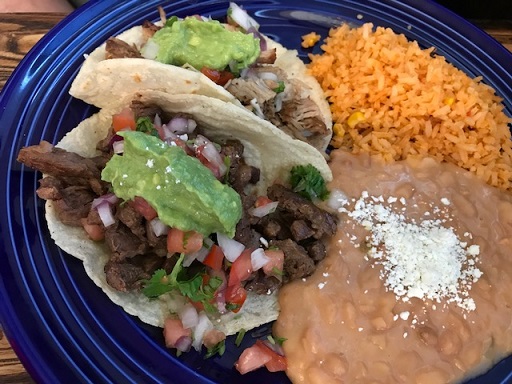 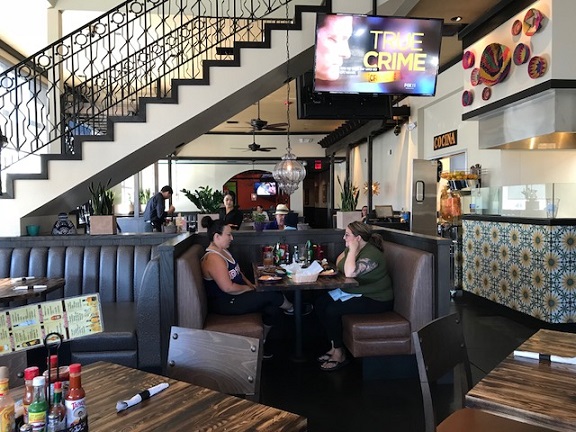 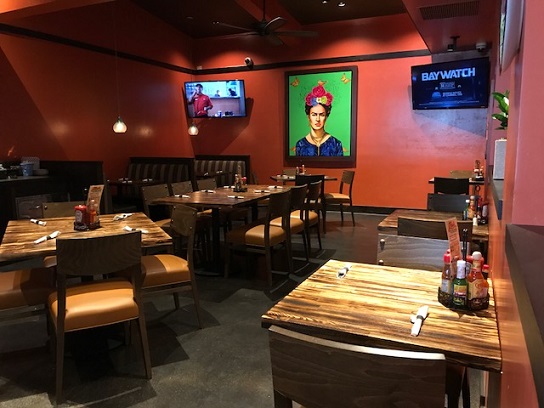 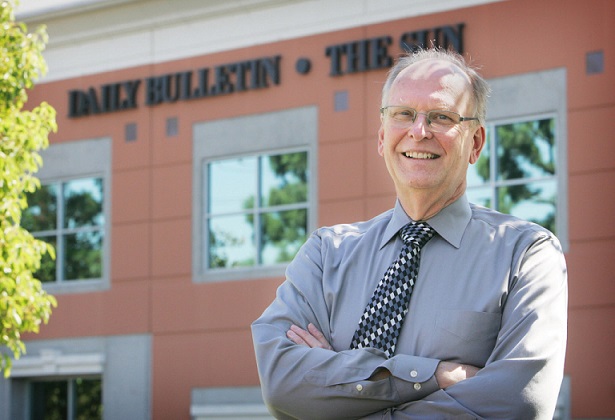 One of our number is departing: Mike Brossart, who’s worked for the Daily Bulletin and Progress Bulletin for a combined 42 years, retires Friday. I write about his career, including some colorful newspaper stuff from his Progress-Bulletin years, in Wednesday’s column. 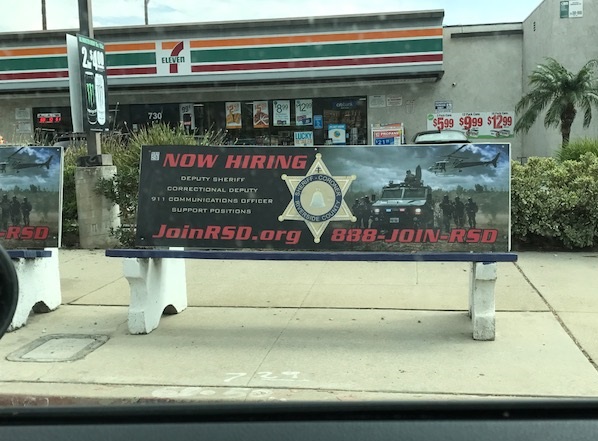 Based on this recruitment ad on a bus bench in Pomona, the Riverside Sheriff’s Department seems to be a previously unknown fourth branch of the armed forces. Is their mission to help the public or subdue it? 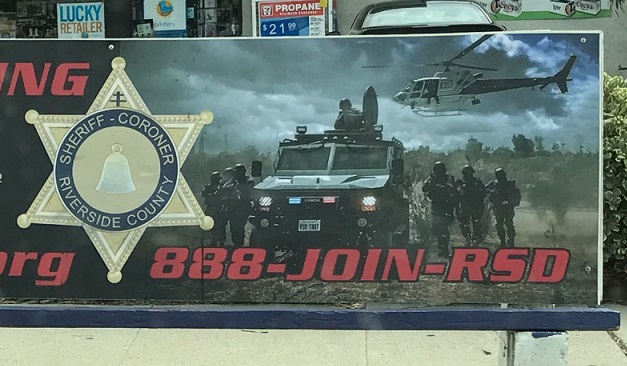 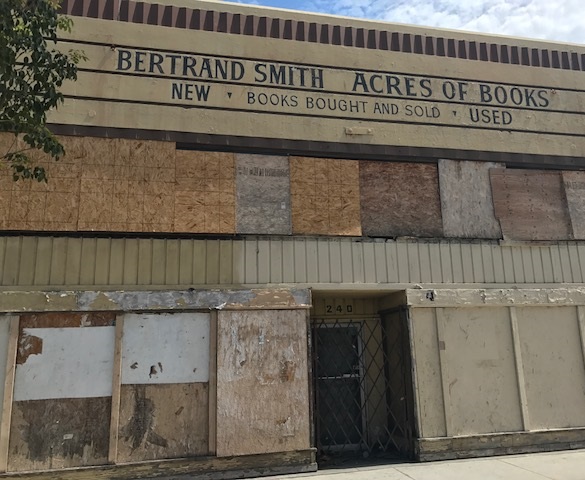 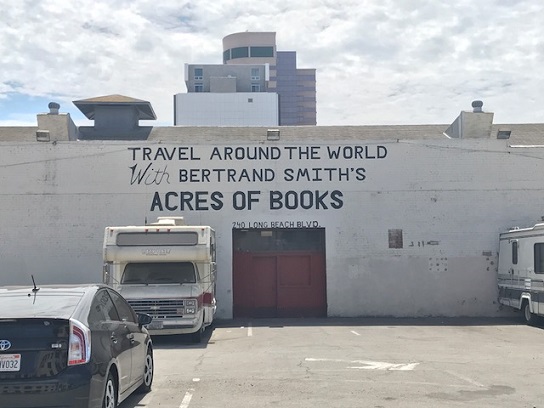 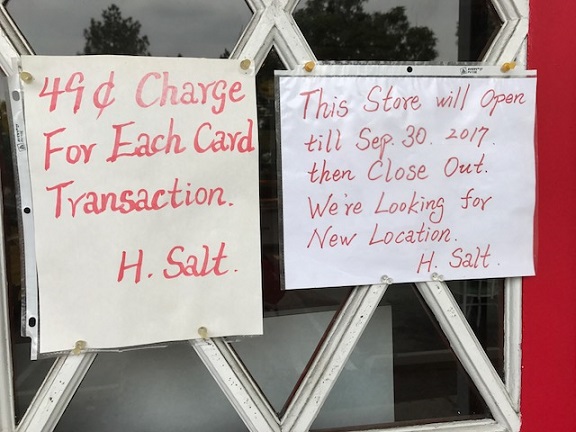 After nearly 50 years, the H. Salt Fish and Chips in Upland is closing Sept. 30. That might have been worth just a Valley Vignette, or overlooked entirely, but even a franchise restaurant can have a loyal clientele and dedicated owners, as I learned. I tell the story in my Sunday column. 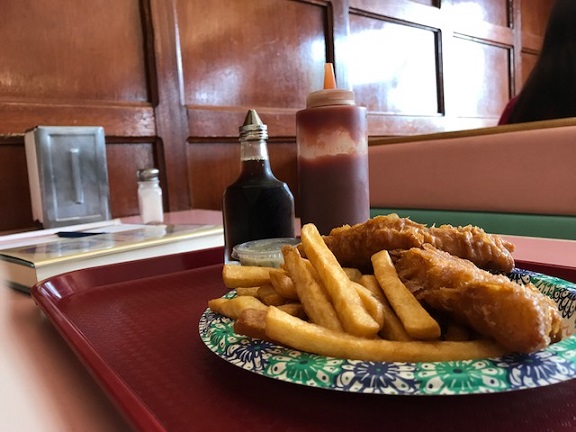 Above, the signs on the door, either one likely to inspire a sense of gloom, and my lunch. Yes, they give you malt vinegar if you want it. Two photos below from Yelp by Letty F. and Justin A. for documentary purposes. So long, H. Salt. 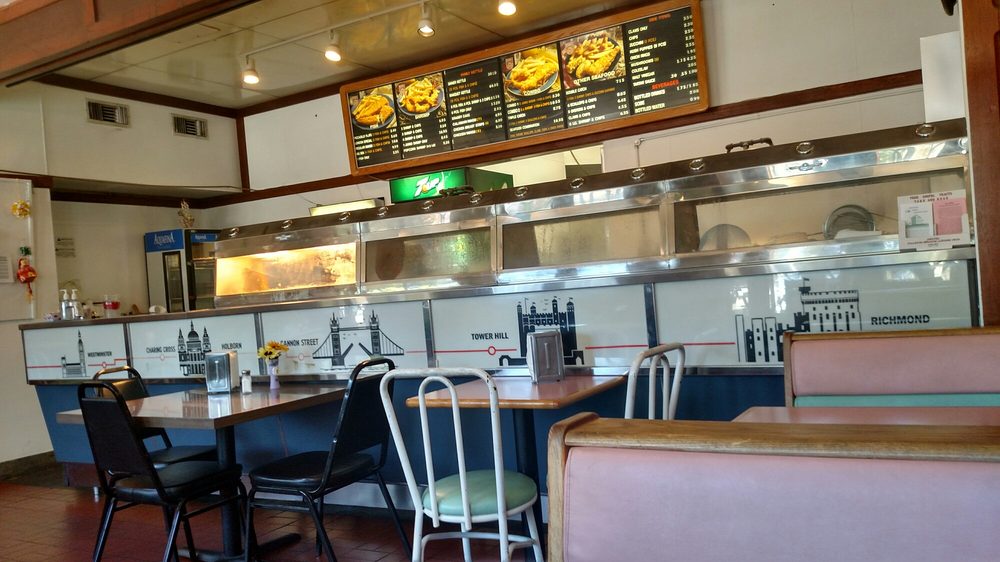 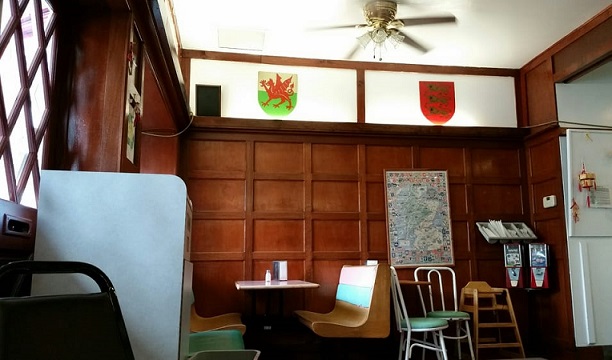 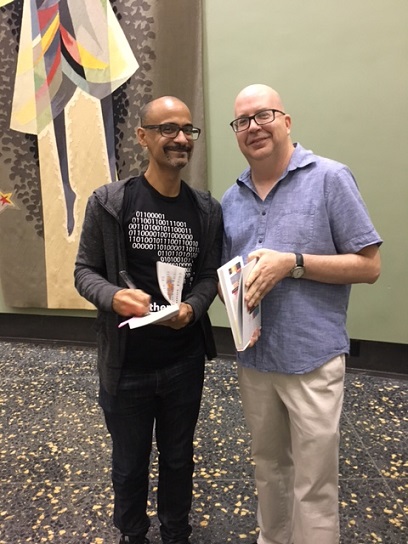 I attended an author talk at Scripps College Tuesday night for Junot Diaz, who won a Pulitzer for his debut novel, and he had enough interesting things to say that I decided to write about it in Friday’s column. That’s followed by items about my own book talk, a dismaying reaction to my shirt (!) and a Valley Vignette.

Above, Diaz multitasks by signing a book for me while mugging for the camera. 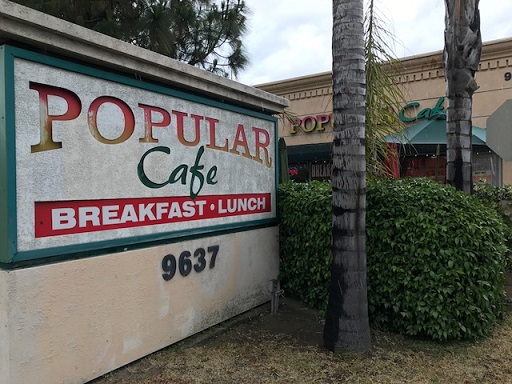 For years I drove past the sign for Popular Cafe and chuckled at the immodest but charming name without ever really considering going in. Last spring a source who’s a regular suggested meeting there for a lunch interview. Well, why not?

After the bland exterior, the inside has some homey touches: a hutch behind the greeter station, kitchen-style cabinets visible in the kitchen. It’s family owned by a Chinese American couple, with the wife waiting tables and the husband cooking the food, at least on my visit.

Serving breakfast and lunch only, Popular Cafe has been around for some 25 years — see, it must be popular — starting off down the street and later relocating a few blocks north. The couple’s children, I’m told, used to help set tables when they were shorter than the tables. Awww.

I had the meatloaf sandwich ($7.29), which came with lettuce, tomato and mayo, and got slaw as my side. Not a lot of places have meatloaf sandwiches (sigh), and even fewer serve it as an actual sandwich rather than open-faced with gravy and mashed potatoes. But not only does Popular Cafe get points for trying, they get points for succeeding, as this was a solid version. 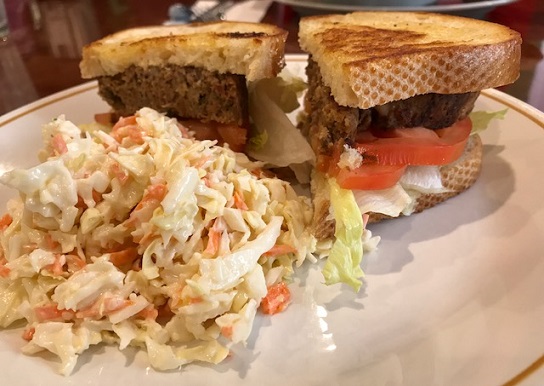 Three months later, I went back for another lunch. They’re known for omelets and pancakes and I believe serve breakfast all day. (Why not, when it’s essentially a two-person operation? There’s not a lot of red tape to cut through.) For lunch they have hot and cold sandwiches and some $7 lunch specials, including a few Chinese American dishes like kung pao chicken and egg foo young. 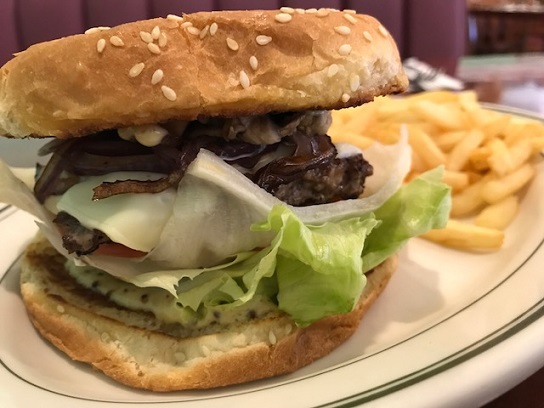 I got the mushroom swiss burger ($8), lured by the menu’s promise of a hand-formed patty. Indeed, it was a better than average burger. The bun, however, wasn’t quite up to the job of holding everything together. A sturdier bun is recommended.

So, this is a decent option for all-American food. My second lunch came on a slow day in which I was the only customer the whole hour. C’mon, people, it’s the Popular Cafe. Don’t make liars out of them. 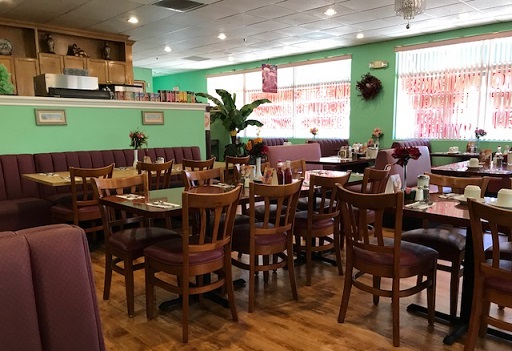 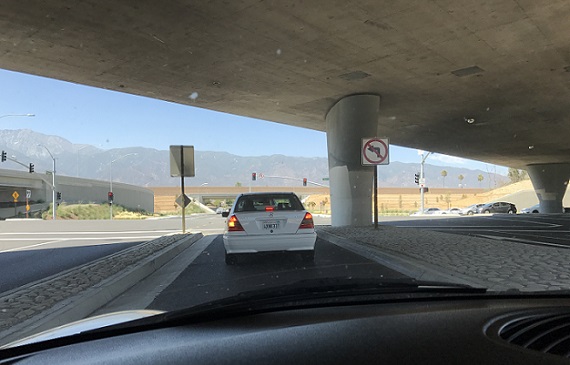 A view looking north on East Avenue in the left turn lane that seems to be on the wrong side of the freeway pylons.

I marvel at the improved but still confounding Base Line Road interchange in Rancho Cucamonga and Fontana in Wednesday’s column, while also tossing in a list of notable upcoming local concerts and a Valley Vignette. If you’ve had any experience with that interchange, past or present, I’d like to hear about it, in hopes that it isn’t just me.

Secrets Behind the Columns Dept.: I wrote the interchange item as long ago as May and revised it a few weeks later but, unsure if it was column-worthy, saved it for a rainy day. I’m on call for jury duty this week and don’t know from day to day if I’ll be working the next day or serving. Learning Monday night that I’d be working Tuesday, and thus would need to file a column by 1 p.m., I hauled the interchange item up from the depths.

Will I have a Friday column or a Sunday column? Only court administrators know for sure. 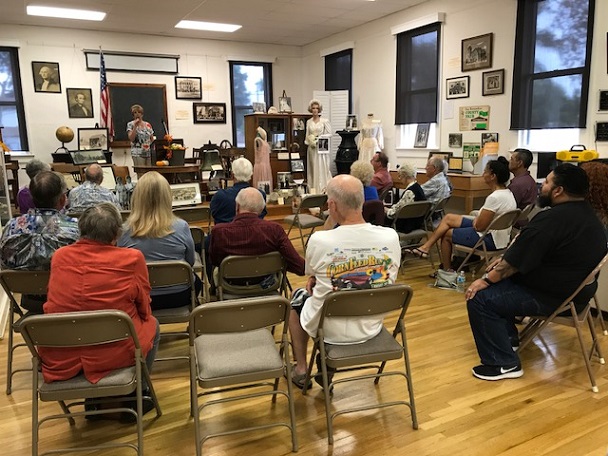 About 20 people showed up for my talk Saturday morning at the Chino Museum, 5493 B St., hosted by the Chino Valley Historical Society. I yakked about my career, read selections from my books “Pomona A to Z” and “Getting Started,” took questions, and sold and signed books. It was my first event in Chino and, one hopes, not my last. The museum is stuffed with objects to look at and merits a return visit.

The sign out on the sidewalk was a flattering touch. 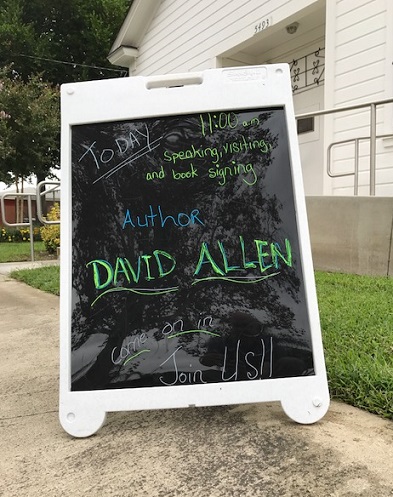 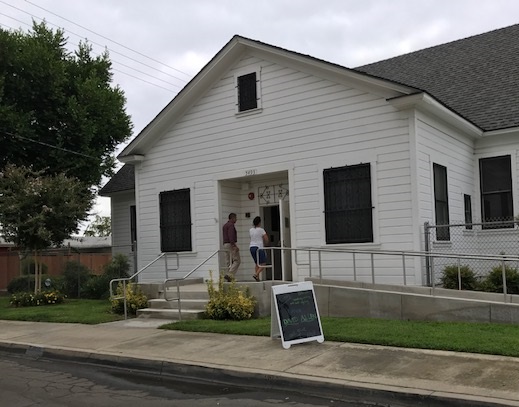