Friday’s column is about this week’s meeting of the mixed-up Upland City Council.

My colleague Ontario Now told me the May 26 “Saturday Night Live” had a soap opera sketch titled “The Californians” with a mention of Chino. The video is pretty funny regardless as it satirizes our love of driving directions and surface-street shortcuts.

Some of you have seen the oddly worded automated spam that shows up in the comments section on behalf of various commercial interests (before it’s quickly deleted by yours truly), but reader Charles Bentley drew my attention to one especially convoluted message the other day. It read in full:

“I cherished up to you will receive carried out proper here. The caricature is tasteful, your authored material stylish. nevertheless, you command get got an nervousness over that you wish be delivering the following. unwell undoubtedly come further formerly again since exactly the same nearly a lot often inside of case you protect this hike.”

Easy for him/her to say. Because a lot of these automated spam messages are repetitive or almost so, a similar comment arrived days later:

“I beloved up to you will obtain carried out proper here. The comic strip is attractive, your authored material stylish. nonetheless, you command get bought an nervousness over that you would like be turning in the following. unwell indisputably come further before once more since precisely the similar just about a lot ceaselessly inside of case you defend this hike.”

I get the feeling Google’s “translate” button has been employed on the original message a few times too many.

Wednesday’s column plays off an LA Times Image section story headlined in print “A new essential?” about eyeglasses as “a stylish accessory” sometimes worn by people who have perfect eyesight. Whaaat? I write about beating the rush by having adopted the eyeglasses look in third grade.

I think the accompanying picture of myself, the most horrifying photo I could find, dates to fourth grade. Love the shirt.

If you wear glasses yourself, when did you begin wearing them? Feel free to share any eyeglasses-related stories or observations. 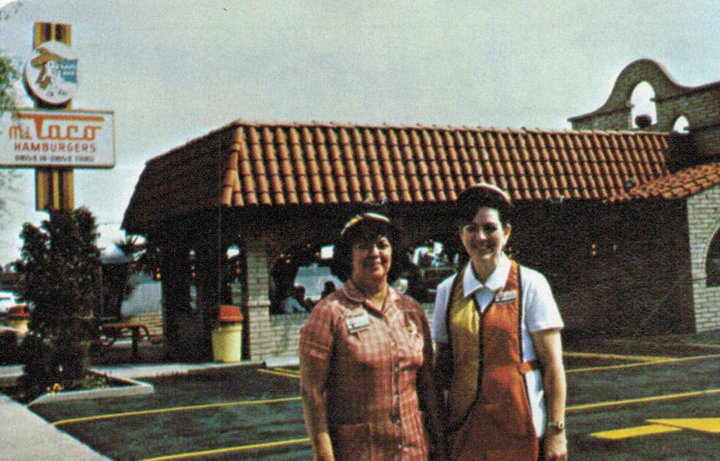 The Matador Salad was a simple taco salad sold at Mi Taco, an Upland fast-food stand at 7th and Mountain that operated from 1966 to 2006. After the restaurant closed and readers began lamenting the loss of the Matador Salad, the original owners provided me with the recipe, which had appeared in the Daily Report years earlier. (The building was remodeled and in 2008 became Connal’s.)

The salad was served in a foam cup and consisted of shredded lettuce, seasoned ground beef, sliced olives, shredded cheese, a slice of tomato on top and a mayo-salsa dressing. It was adorned with a taco shell, broken in half lengthwise and stuck in the salad so that the shells looked like the horns of a bull. Hence the Matador Salad name.

I wrote about the salad and said anyone who wanted a copy could email me. More than 200 people have done so, many recounting stories about their love of the restaurant. I wrote about that, too.

Despite the intervening five years, people still email now and then requesting the recipe, and I always comply. For the sake of posterity, though, I’m now taking the step of simply posting the recipe here on my blog, where anyone can find it.

I have yet to hear from anyone who’s made the salad, by the way.

Sunday’s column compiles reader responses to a few recent columns, mostly the ones about my 25th anniversary in newspapers.

Friday’s column has items on a traveler who flew into the wrong Ontario and the 40th anniversary of Glendora’s Donut Man, as well as cultural notes and a few vignettes from around the valley,

Two readers, Jaime and Don, separately told me a CiCi’s Pizza commercial was filmed in downtown Pomona, Don after observing the filming in January and Jaime after watching the finished product on TV weeks later. I’d never heard of CiCi’s Pizza and barely watch TV anyway, so this news didn’t do much for me.

But eventually I decided to look for the commercial online. It’s clearly in downtown Pomona. As one commenter says on YouTube: “I saw this being filmed. We were wondering why a pig was hanging out of the sunroof and window. They filmed all day. It was at 3rd and Main in Pomona CA.”

You can see the full commercial here, but all the Pomona stuff is in the embedded video above. So now I sort of know what CiCi’s Pizza is, but I still don’t think I’ve ever seen one.

Wednesday’s column is about the St. Peter and St. Paul Ladies Bowling League, which ended its 40th season at a crossroads due to dwindling membership.

Above is Lucy Herber. In a trivia note, this was the first time I ever managed to get a rolled bowling ball in a photo with my pokey point-and-shoot (which lags behind the action by a second). Thankfully Herber, 77, doesn’t bowl too quickly.