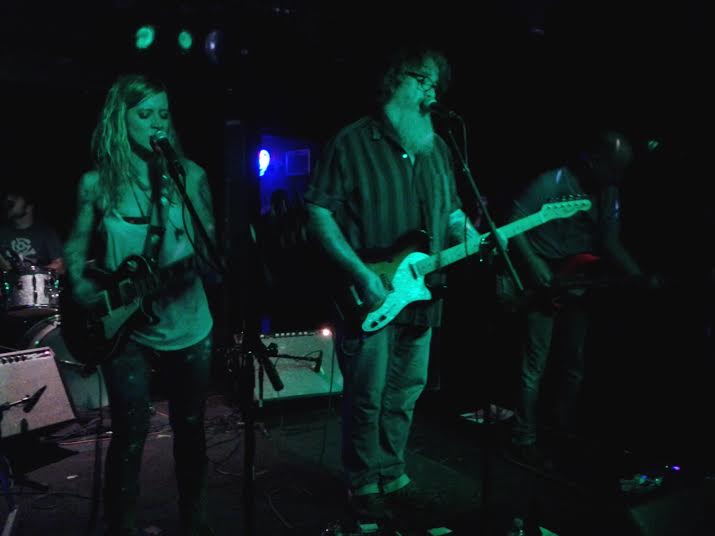 This has nothing to do with the Inland Valley, but it’s a chance to put in a plug for my favorite band, Cincinnati’s Wussy. They say they’re “bridging the gap between The Band and Sonic Youth,” and the band X is another point of comparison. Two friends and I saw them at the Silverlake Lounge on Friday night and we stood just feet away. What a thrill.

Also, I ran into co-lead singer Chuck Cleaver on the sidewalk before the show and he signed one of my CDs, took it into the tour van for everyone else to sign, and posed with me for a photo (see below). Try getting U2 to do any of that.

The sound’s not so hot, but I recorded two short videos on my phone: “Maglite” and “Yellow Cotton Dress.” Of course, Maglite flashlights are made in Ontario, so there’s your local connection if you need one. 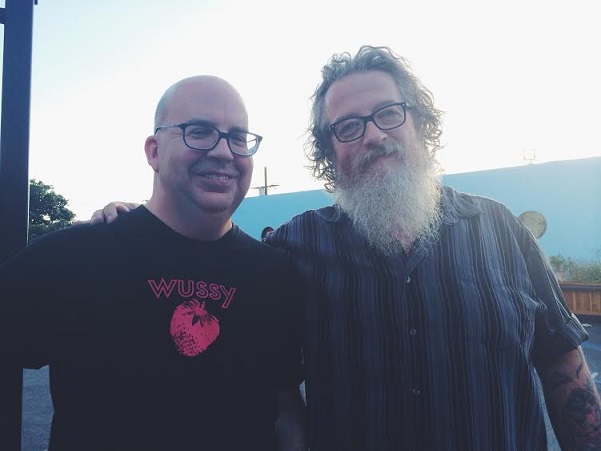 Sunday’s column takes a look at the former Sunkist plant in Ontario, now cleared for industrial development. The water tower remains and will be incorporated into whatever’s built.

Friday’s column is partly about a “Good Day L.A.” segment Tuesday on the Claremont Village that was charming, if a little overdone. You might get more sugar shock from the coverage than from Some Crust. After that: news items from Upland and the cultural scene, and a promo for this blog. If you’ve read my blog this week, my summary of the biggest news is kind of an inside joke for your benefit. 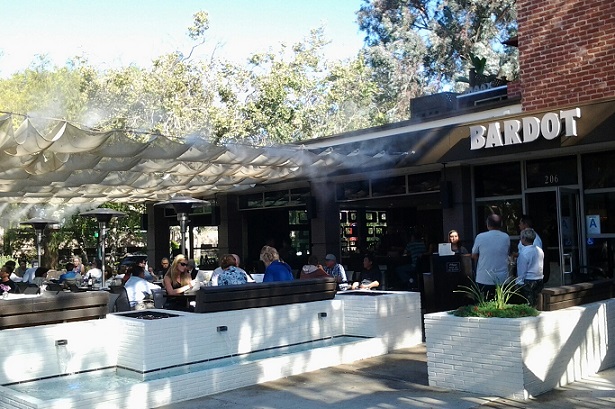 For 21 years the corner of Bonita and Harvard was home to Harvard Square Cafe, perhaps the quintessential Claremont restaurant: largely outdoors, urbane, cozy and slightly boring. But the cafe closed in 2012 and after extensive renovations, interrupted by weeks or months when nothing appeared to be happening, its replacement, Bardot, opened in March.

Co-owner is Alain Fournier, who founded Harvard Square before leaving it to other hands in 1995 and opening Caffe Allegro. Bardot is updated with a more modern look: more white, more light. The interior has a bar as its centerpiece. (Longtime residents, by the way, will remember the distinctive brick building as the Village Theater.)

As with Harvard Square, the patio — now shaded by a canopy — seems to be the spot, especially if you want to be one of Claremont’s beautiful people, the envy of anyone walking or driving past. A friend and I had dinner there recently and chose the patio.

Bardot’s menu has small plates, salads, sandwiches and a few entrees; it’s described as French fusion, but there are only a few French dishes, perhaps because even Claremont can’t support an outright French restaurant. Main courses range from $14 to $38. There’s also wine, 16 beers in bottles or on tap, and a selection of cocktails.

We stuck to the lower end of the food spectrum with $14 entrees: My friend had the croque monsieur sandwich with tomato bisque soup, I had the portobello sandwich with fries (both pictured below), and we liked them both. She had a Pomona Queen beer ($7), I had a refreshing water (free).

Judgment: We liked the place, and the food was fine, although we weren’t blown away.

Two minor but noticeable downsides: The overhead misters are overactive and practically enveloped my friend in a cloud of spray. (See photo at bottom, shot on a different evening, for an example. When we ate, the misters ran until about 7 p.m., kind of late given the mild temperatures.) Also, the chairs are a couple of inches lower than the bench seating around the perimeter, and consequently the table was a couple of inches too high for comfort for me.

Overall, though, the patio ambience is so pleasant that as long as the food and service are acceptable, which they were, Bardot was worth the splurge. “It’s so nice out here,” my friend said contentedly, and I had to agree. I don’t know if any passersby or motorists envied us, but I like to think they did. 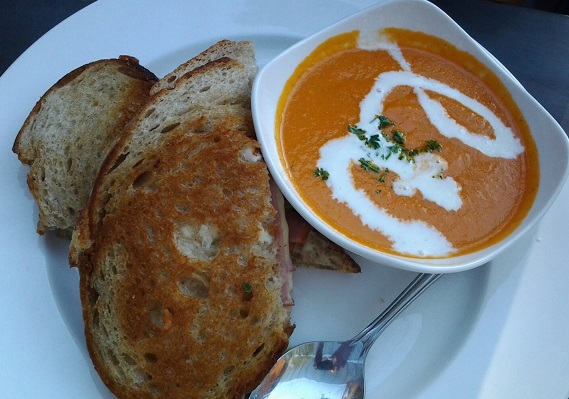 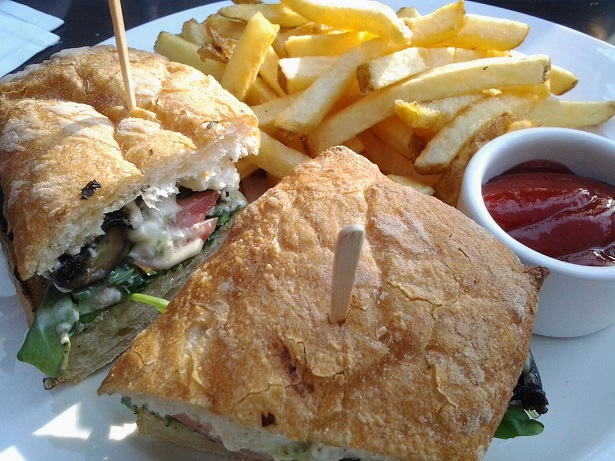 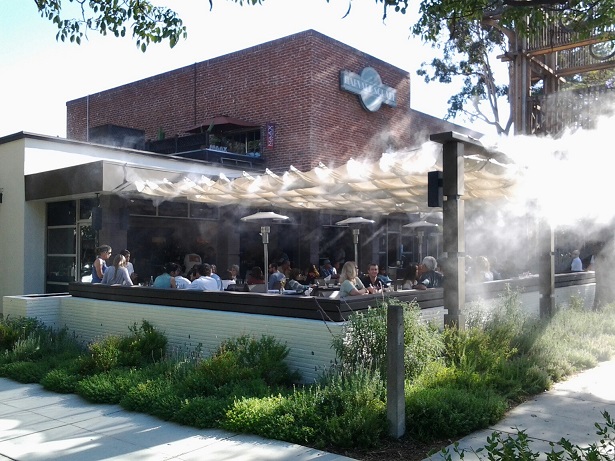 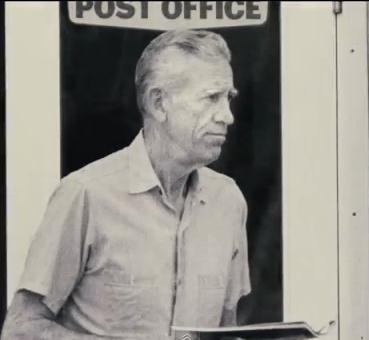 Wednesday’s column is about the transition to a new city manager in Upland, which is under way, and about a spat with political overtones from Monday’s Upland council meeting. Also, about a personal quirk of the new manager, who prefers not to be photographed. 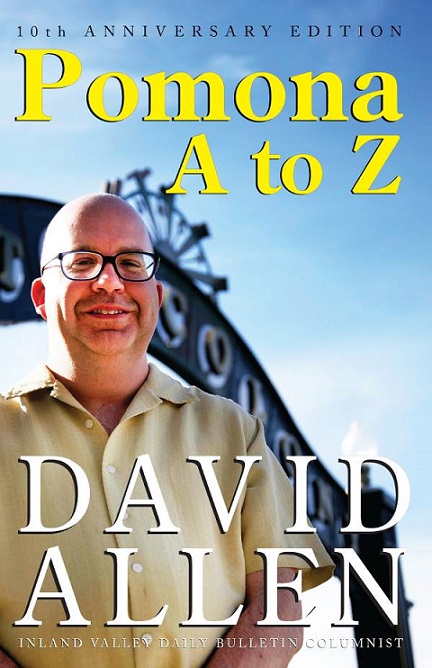 That’s the release date of “Pomona A to Z,” a collection of newspaper columns by yours truly from a decade back. Each of the 26 columns, published in 2004 and 2005, featured something unique or unusual in Pomona for each letter of the alphabet.

This book has been in the works for more than a year, but this is the first I’ve mentioned it. For one thing, I didn’t want to get my hopes up until the book was in my hands, i.e., real. Also, I’ve hesitated to beat the drum too hard by starting too early. Now that we’re close to a release date, though, it’s time you knew. (And note that you blog readers have the scoop before print readers.)

For your $20, you get the original 26 columns, and the photos, as well as a couple of related columns that rounded up the reaction. You also get introductions before each letter that update the original columns. There’s also a foreword by KPCC-FM host Steve Julian, a Pomona native, and an introduction by me. It’s a paperback, 244 pages.

All this and, at no extra charge, a dedication, front AND back covers and a copyright notice. Gosh!

Readings and signings will be announced as they’re set up, but I can tell you now that a release party is planned for the evening of July 18 in downtown Pomona (where else?). Mark your calendar.

In the meantime, here’s a press release, here’s the Amazon listing, here’s the Facebook page and here’s a blog post by Chris Nichols of LA Weekly. The publisher is Claremont-based Pelekinesis. The writer is a familiar name, but I can’t place him. 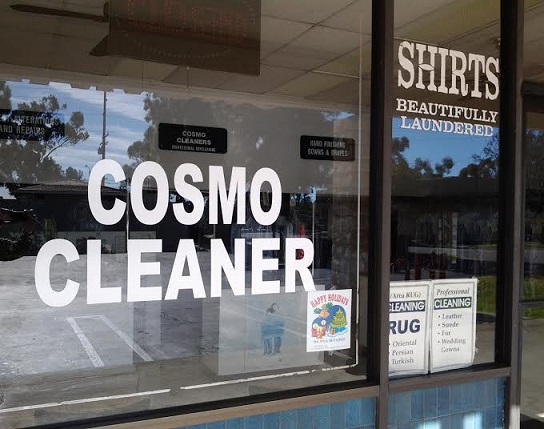 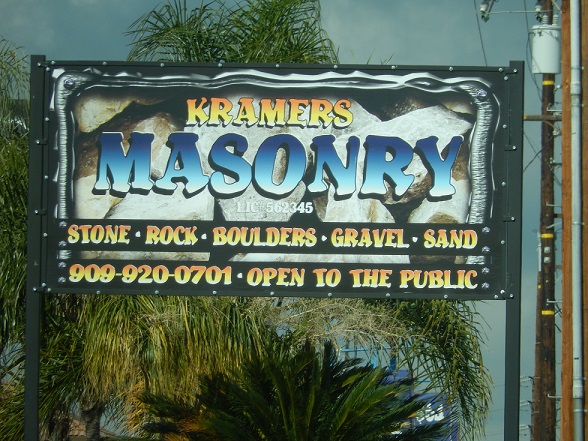 In Sunday’s column: the co-owner of the fondly recalled Rudi Pock’s has died; local connections (perhaps one too many) are seen at LACMA; three Valley Vignettes; and more.

All the latest from the increasingly wacky Ontario City Council can be found in Friday’s column. 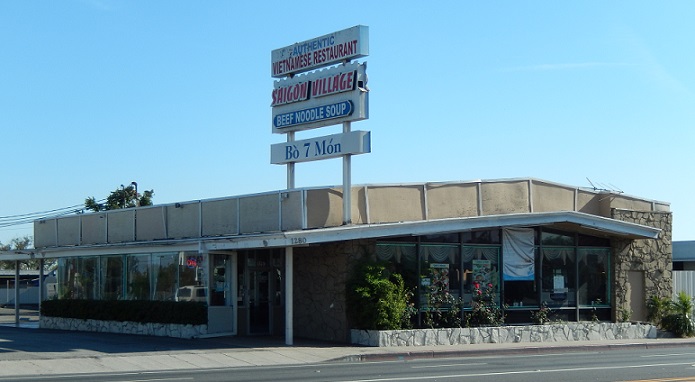 One of a handful of Vietnamese businesses in Pomona’s far-eastern (where else?) stretch of Holt, Saigon Village opened in 2011, replacing Pho Express and the earlier Pho 54. Oldtimers will remember the location as Breakfast at Carl’s, a beloved breakfast spot that moved to Claremont and was renamed BC Cafe.

But that was then, this is now, as S.E. Hinton once said, and this spot has been a Vietnamese restaurant for maybe a couple of decades now. A friend and I met at Macho Pollo across the street for dinner but did so on the one day a week it’s closed. Saigon Village was an acceptable substitute.

The interior still looks a bit like a ’60s diner: crushed stones, big windows, comfortable booths, slinky hanging fixtures. The menu has a zillion items, lettered and numbered. One specialty is called 7 Courses Beef and apparently lives up to its billing (see photo below). An explanation is on the restaurant’s website.

My friend had CS5, special combination crispy egg noodles with chicken, shrimp, squid and vegetables ($9, pictured at bottom); I had the beef pho, another specialty ($7, below).

The noodle dish was constructed like a bird’s nest, very cool. “I liked it a lot,” my friend said.

I’ve had pho a few times, although I tend not to order it because I’m very poor with chopsticks and end up using a fork. The server, who may have thought I’d never had Vietnamese food before, pushed the pho, and when she brought it she explained what to do with the plate of condiments: strip the leaves from the mint and put them in the bowl, add the bean sprouts, mix Sriracha and hoisin sauce in a dish and swirl the meat in it, and add Sriracha to the broth. I have to say, nobody has ever offered instructions before.

Some on Yelp say the broth is bland, and I wouldn’t disagree — that may explain all the Sriracha — but I’m too inexpert to feel comfortable making much of a value judgment. Only large bowls of pho are served; I couldn’t quite finish mine, but I ate too much to bother taking the dregs home. I liked mine, although I feel like I’ve had better.

So, not a bad place, and if you like Vietnamese food, old diners or have fond memories of Breakfast at Carl’s, you might want to try it. Also, as my friend said of the cuisine: “It’s good hangover food.” 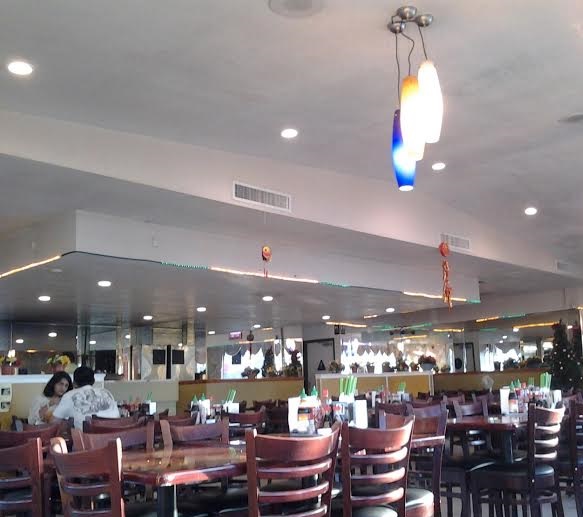 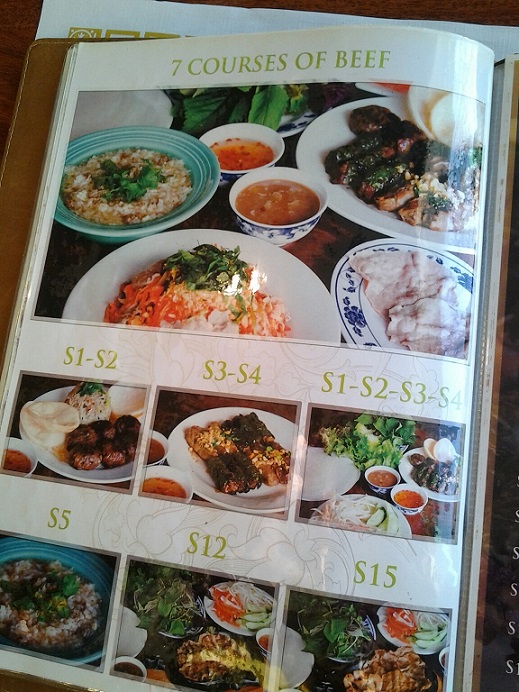 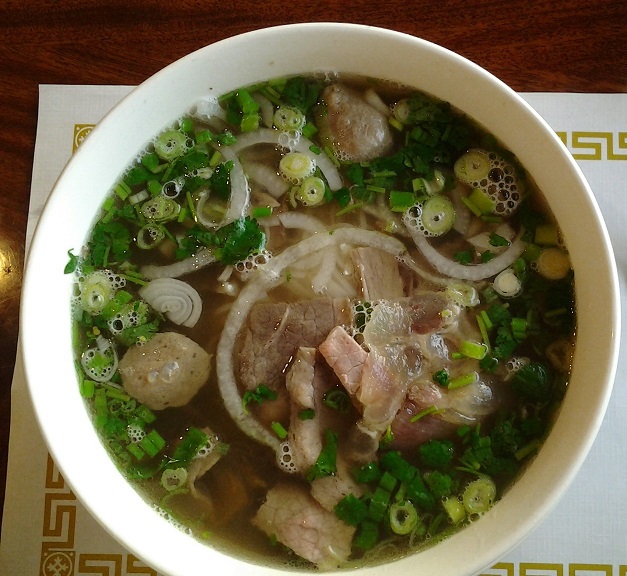 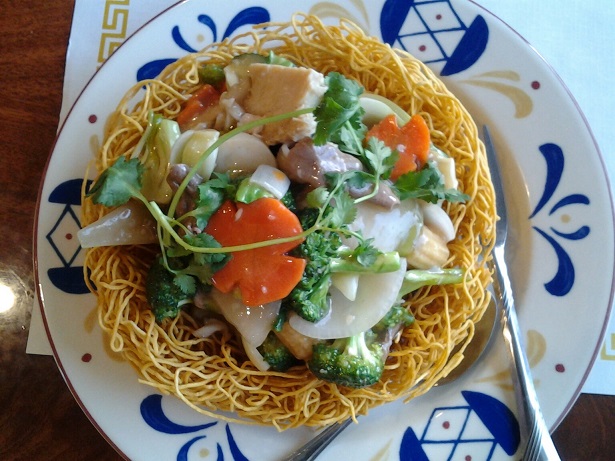